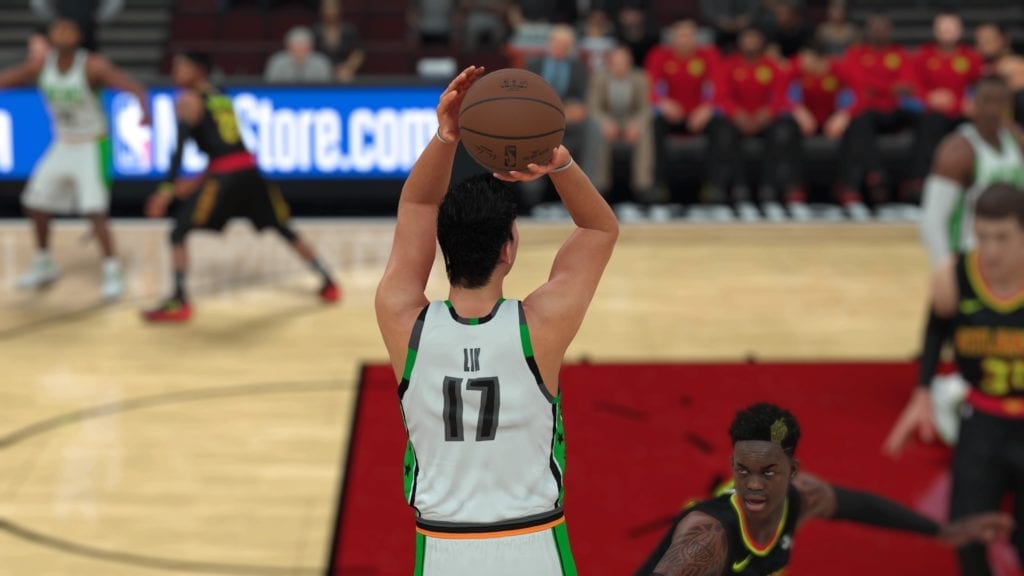 This past week of MyTeam has been jam-packed with content. First of all, a new set of challenges popped up. 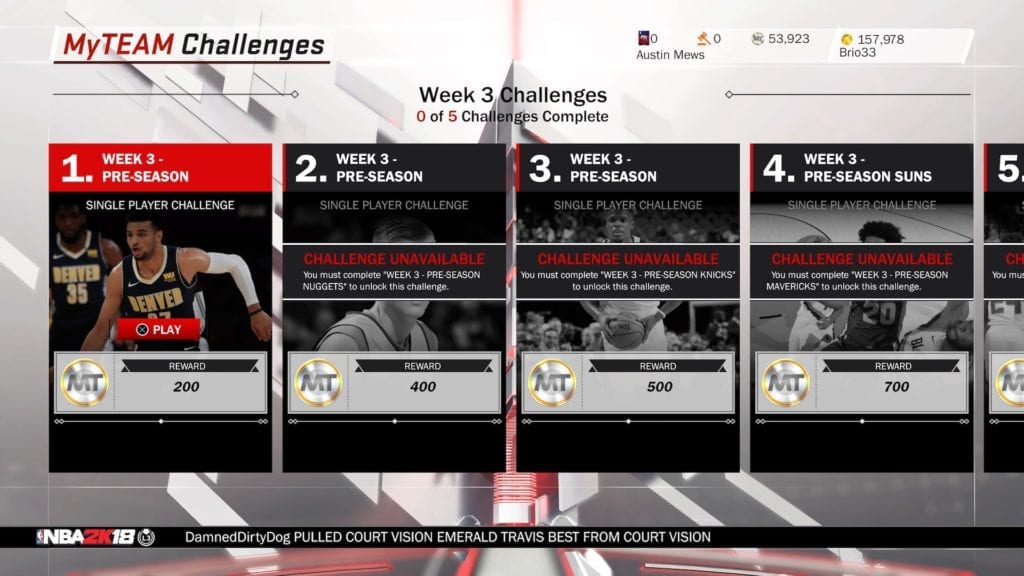 We’re supposed to beat up on teams that “have promise heading into the pre-season,” like the Nuggets. No offense to Paul Millsap (or Kristaps, Dirk, Eric Bledsoe and whoever is on the Kings now), but these are pretty easy games. Before you know it, you’ll have earned another (potentially fourth) challenge token and be one step closer to this Dee Brown card: 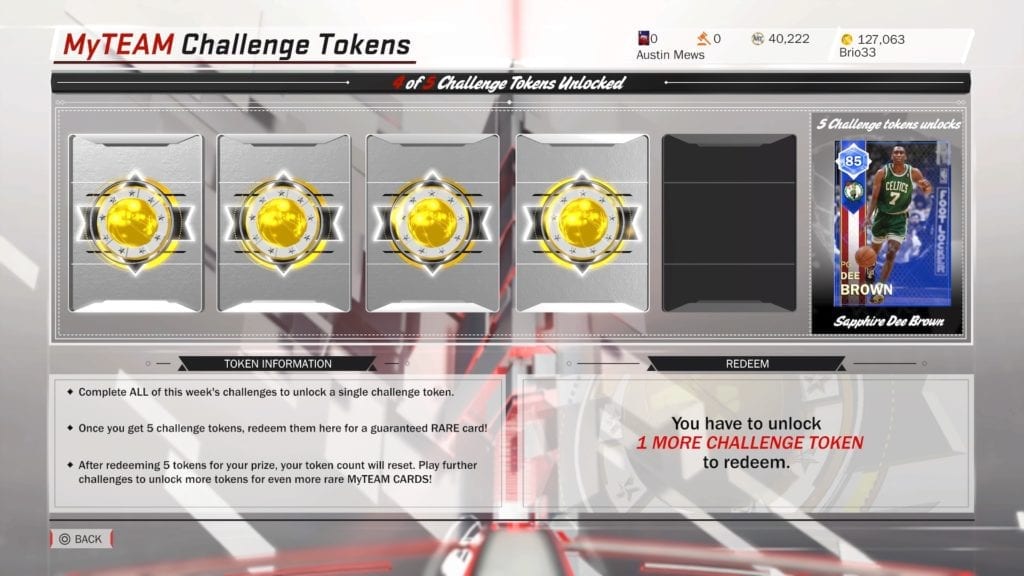 Also new this week, the Rim Rockers pack. Here’s a 2K blog detailing the players you’ll find inside, but most notably, completing the collection nets you a (young) Kobe Bryant!

Then last week we saw our first premium pack of the season, Court Vision. It features a group of elite playmakers, like Jason Kidd and Kenny Anderson, with the ultimate goal being a ruby Deron Williams. Deron and Kobe are enticing, but the cost to complete these collections is frighteningly steep right now. 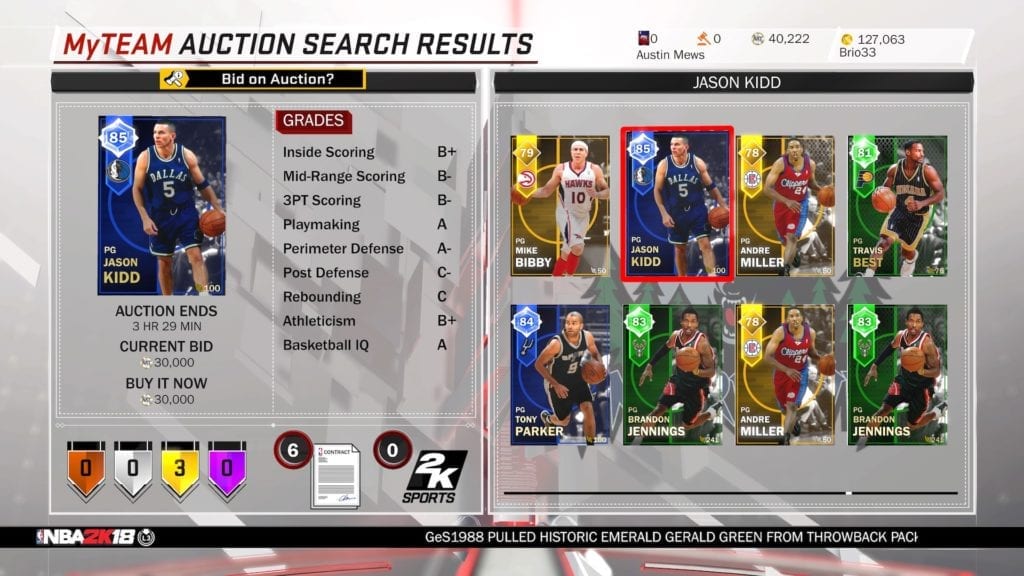 I’m not about to spend 30,000 MT on a sapphire Jason Kidd, for example, when I can get Steph Curry for half that. (Plus, like basically everyone else, I’ve got the pre-order Kyrie.) Buying all 10 cards could easily run you hundreds of thousands of MT.

The prices usually go down over time, but players who are just as good, if not better, can be acquired now. 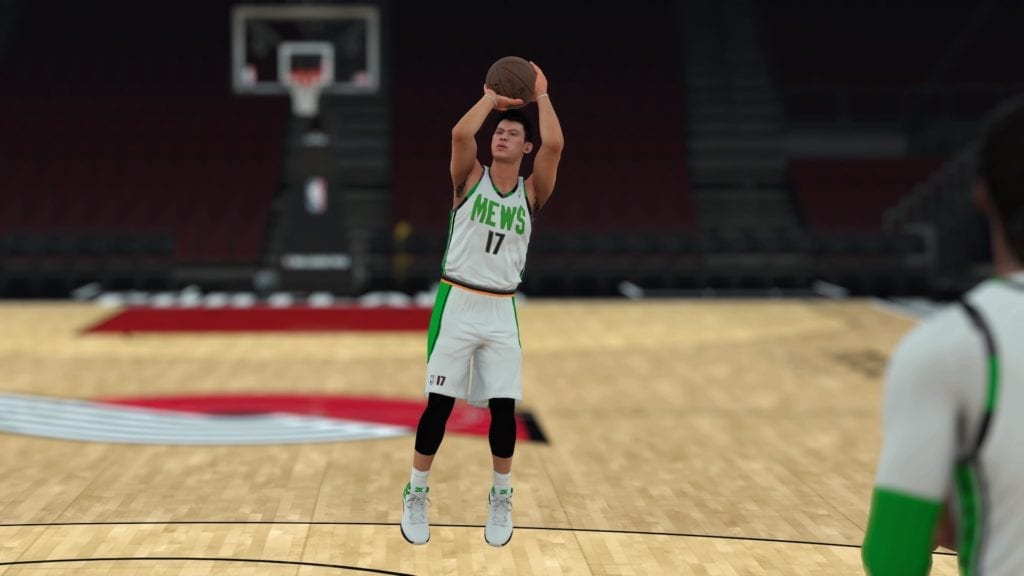 I just completed the Knicks collection to get Linsanity-era Jeremy Lin, which has been a great card for me. He’s rated 99 in the Seven Seconds system, which is what I’ve been using most as of late.

Or if you want a flashier guard in your lineup, roll the dice on a Throwback Pack because Allen Iverson and Baron Davis are two of the new historic cards added to the mix. The best part about Throwback Thursdays though is that some of these new cards get us a step closer to historic collection rewards. Baron Davis is part of the Hornets collection, which I’ve targeted because of this amethyst Al Jefferson: 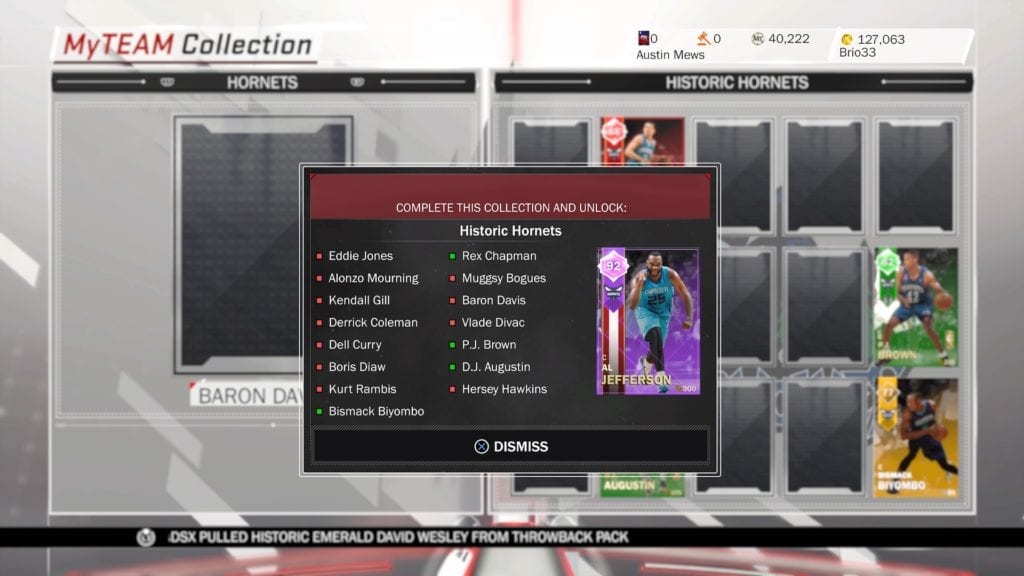 As I make my way through Historic Domination and games get more difficult, I’m prepping for these rewards because I know I’ll need to continue upgrading my team. So I’m selling off cards that don’t fit my play style as much as I’d hoped; I recently made the tough decision to sell the ruby Al Horford I got a couple weeks ago. He brought back a ton of MT (37,000 to be exact), and as we hear so often in the NBA, this is a business.

I think my long-term solution at center will be Al Jefferson or the Mark Eaton card I mentioned last week, so I’m slowly acquiring the players that go in those collections. Ideally, that means on the cheap, so Baron Davis will have to wait. Right now, I can afford to be patient. 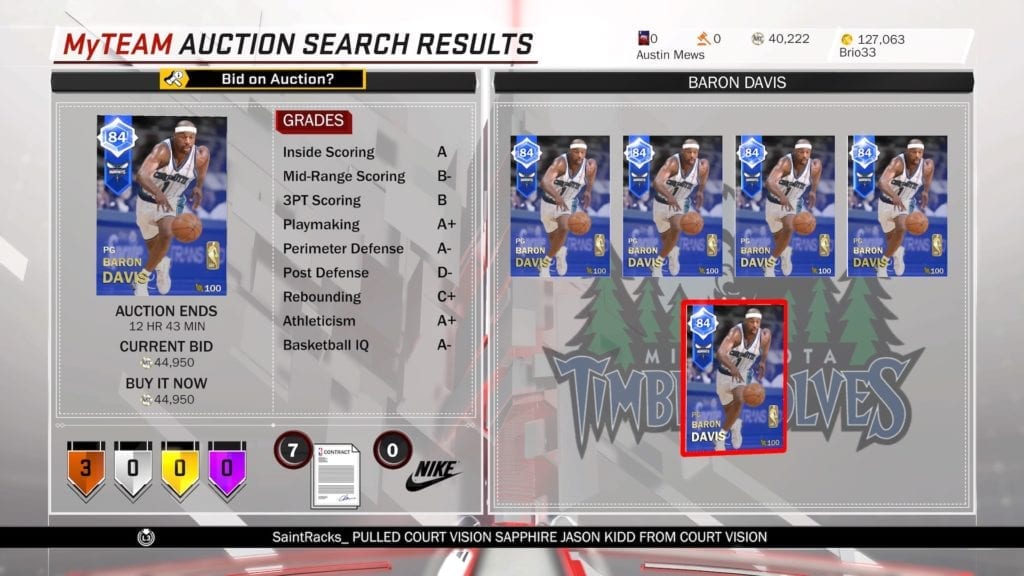 To round out my starting lineup, I’m very happy with the Ron Artest and Shareef Abdur-Rahim cards I already have, but my guard rotation is up for grabs. Kerry Kittles (the very first reward card I earned) might end up being my long-term solution at shooting guard, but I’m currently auditioning Cuttino Mobley. 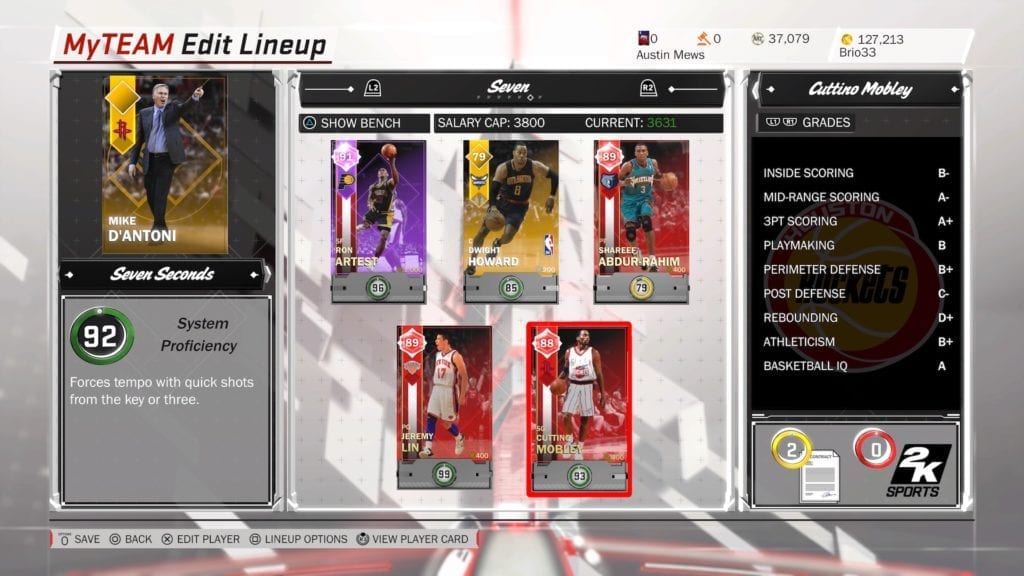 He’s quite the scorer,  can play some defense and, to my knowledge, this is the first year he’s been in NBA 2K, which is cool. But the main reason I went down this road is because I think the Historic Rockets reward — amethyst point guard Calvin Murphy — is going to be worth the effort. As anyone knows who’s seen Calvin on local Rockets broadcasts can attest, the man is stylish AF. 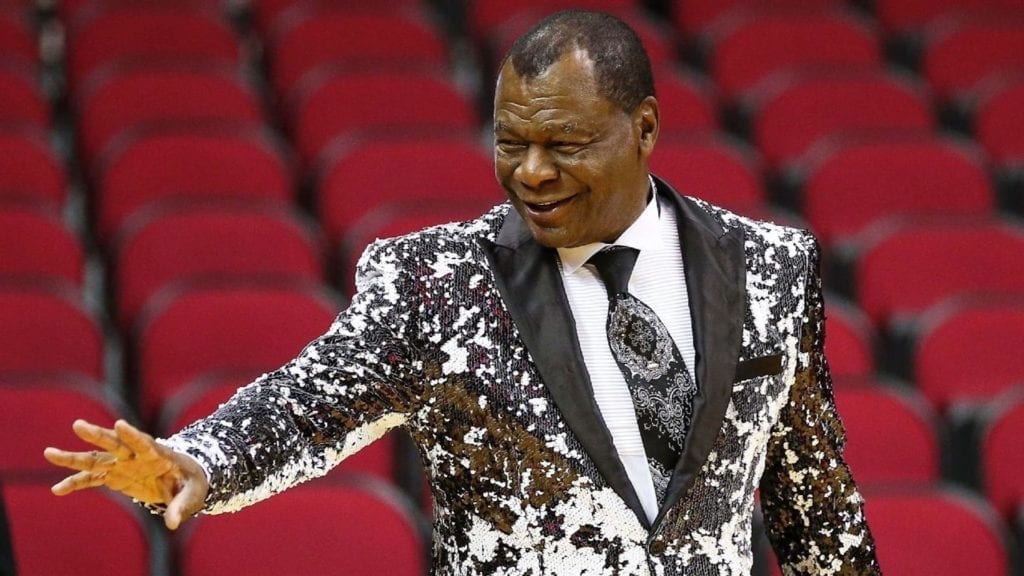 Anyone have their long-term sights set on a certain card or cards? If so, why those players?

I’m sure as more cards are released throughout the season, my plans will be thrown out the window, but one of the most fun aspects of MyTeam is to fantasize about the ultimate be-all-end-all NBA lineup!