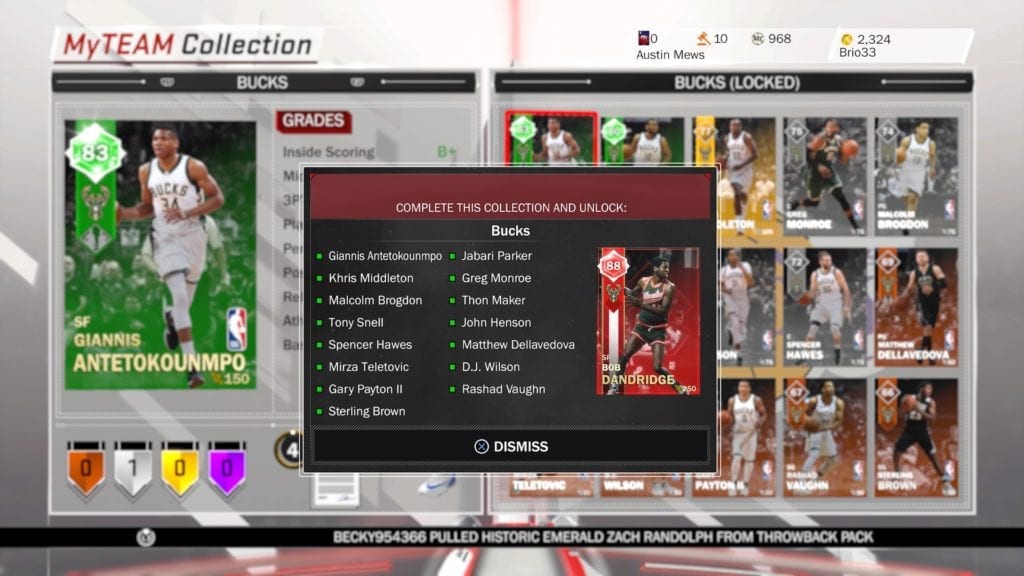 The Urban Dictionary defines “grinding” as “what every middle schooler and high schooler does at a school dance.” Not exactly the usage of the word our community knows and loves, but if school dances involved grinding NBA 2K, I definitely would have gone to more of them. It really is that fun to play, and I have to agree that this year’s version is the best in 2K’s History.

I’ve finally had a chance to explore all the major game modes, and overall it’s been great. But, I always come back to my first love: MyTeam.

This week, I focused on completing team rewards, because they’re some of the best cards available right now. But you’ve got to earn that MT and play the auction game to get it done. I did just that, and am now the proud owner of a ruby Bob Dandridge via Milwaukee and Kerry Kittles via New Jersey; Kerry especially has been more than worth the effort. He’s a scoring machine and lockdown defender, and most importantly, the Nets team was relatively easy to complete. (D’Angelo Russell, rated 75, is their best player so no one was terribly expensive.) I think I’m going to go after Kevin Willis next because the Hawks are so depleted this year, and I already have their best player in Dennis Schroder.

I mentioned Dennis last week as being a solid budget pick, and this is now truer than ever. It seems like everyone is selling him in the auction house, so he’s easily attainable for 500 MT right now. Sad for Dennis, but good for us.

Another solid acquisition has been Raef LaFrentz. I was looking for a center to round out my Perimeter Centric lineup, and he’s rated 91 in that system. He’s a good defender and rebounder, plus is a beast from (surprise, surprise) the perimeter! Then as I was snatching up Bucks to get that Bob Dandridge card, I ended up stumbling onto my favorite MyTeam player so far this year: the Greek Freak, Giannis Antetokounmpo. I basically can just run my offense through him, and it almost seems unfair; he’s so freaking athletic. Not the best shooter in the world, but if paired with Khris Middleton (his dynamic duo), Giannis jumps a gem level and his “open outside shooting” goes from 61 to 70. Currently, they’re the first two players I bring off the bench in a few different lineups, and the impact they have together is massive.

Speaking of the bench, I think I’m going to banish the online modes to the end of my metaphorical bench.

Playing online in MyTeam is still really choppy for me, which is odd because I tried a couple of Park and Pro-Am games the other day, and they seemed okay. I wish I could figure that one out. Is there a certain time of day I need to be playing MyTeam? A certain camera angle I should online use that’s easier on the servers? Maybe standing on one leg and holding my breath is the secret? I’m legitimately asking, as I just want it to work better. In Super Max, round one of season one has begun. (Say that three times fast…)

The intention of this mode is to keep players from going against stacked teams by limiting everyone via a “salary cap.” This is great in theory, but the last team I played against consisted of pre-order Kyrie, Shaq and D-Wade, plus Marc Gasol plus an 88-rated Luol Deng reward card. Hmmm…

I didn’t get the Legend Gold edition of NBA 2K18 so I was a bit under-matched. Then add my lagging issue to the mix, and it was a frustrating experience. Maybe the salary cap needs to be lowered? That team I just mentioned would give the 2017 Warriors a fit. In Pack and Playoffs, I’m still a little confused by the draft process.

Right now, my squad is 80 percent big men; Jabari Parker is my point guard! There should be (and maybe is, but I haven’t figured it out yet) a way to ensure that if you’re missing a point guard, for example, the final packs you open will only have guards. So no matter which two cards you flip, you’ll have a reasonable choice to fill out your team. And I know it’s not just me; my opponent in the picture above is running KD at center and AD at the point. Plus, the other day I played a guy who had all guards, and J.J. Barea was his center! That being said, this draft model does make the mode very different from any other out there because there is so much potential variety in team construction, which is a good thing.

So yeah, I think right now the best thing for me is just to take a break. Hopefully once a little time passes, there won’t be as many people online and things will smooth out. Besides, there’s so much other stuff to keep me busy, like opening one of the brand new Throwback Packs! These came out last Thursday, and I had to try some. The prices are higher than the regular League Packs, so therefore my expectations were higher, too.

Notice that bit in the screenshot that says there’s “a small chance of pulling a historic player?” They’re not kidding. The only “historic” card I got from 4 packs was an 83-rated Mo Williams, which is okay, but I think I’ll stick with Kyrie and Dennis, thank you very much. Off to the auction house you go, Mo. I gotta save up some MT for an elite shooting guard to compete with the pre-order D-Wades of the world.

If you really want cool historic players and don’t feel like buying packs or trolling the auction house, I think the best way to get them is through Domination. This Steve Francis card was the reward I picked last year for getting through the mode:

Then, Historic Domination was unlocked and that netted me historic players (obviously) from each team, 33 in fact, plus a diamond George Mikan for beating the mode. Not a bad haul! And it sounds like this year, in addition to the rewards for beating each mode, there are other rare cards you can earn along the way, too. I’ll definitely keep you updated as I make my way through it. Or if you’ve gotten there already, let me know what I have to look forward to.

But wait, there’s more — new to 2K18 is All-Time Domination. (If you don’t already have the game and are curious, here’s a link to see the players on each team’s roster and their ratings.) The challenge of beating them all sounds insane, and I absolutely can’t wait. In fact, I’m frothing at the mouth right now just thinking about those potential rewards.

Yes, it takes time and effort, but earning cards the hard way (#grinding) creates an emotional connection to the players that makes playing MyTeam (and watching those guys in the NBA) way more fun.