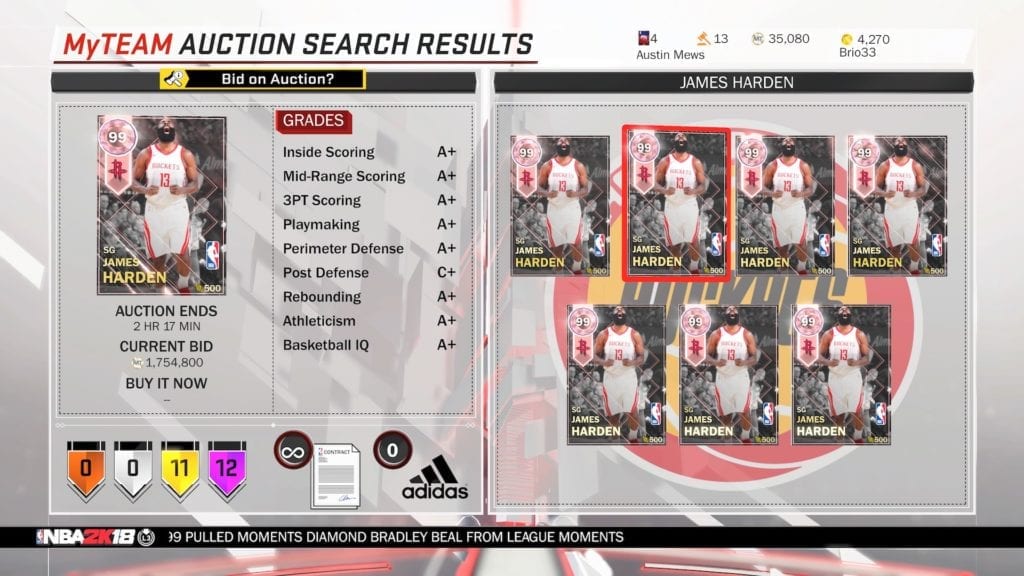 The picture I used above was from waaaaaaay back when he first dropped. Remember when he cost multiple millions of MT? I definitely do. And if you’ll recall, I went through a bit of a journey to get him. Yes, he was my guy, but sometimes when you love someone you have to let them go.

You’re probably thinking that I sold Harden to try and buy a diamond Melo or Oladipo or one of a zillion new cards that came out this week (via the Playoff/Playoff Throwback packs). But no, that’s not the reason I shaved The Beard from my squad. I did it because of Kristaps Porzingis.

Yes, I tried my hand at some Super Max, and (surprise surprise) it did not go well.

James’ offense and playmaking are fantastic, obviously, but with all the other great players on my team, I didn’t feel like he was being utilized enough to warrant the price I paid to get him, and the price I paid on the court when he tried to defend an elite guard. (Speaking of elite guards, I wish the MJ from my list last week was real because that would probably solve my problem.)

So anyway, I got my ass kicked five times in a row, and James’ defensive shortcomings took the rap for my crappiness on the sticks — though I do think “the equalizer” is very real.

And I can admit now that I mainly sold him because I just got mad — like a toddler having a tantrum at the grocery store mad, and made a rash decision to blow my team up. The very last game I played especially had me seething, due to some verbal teabagging from my vastly superior opponent. About halfway into the second quarter, I’m down 15 points and I hear him come onto the mic:

“Dude, you’re not very good at this game, are you?”

I didn’t know what to say, so I said nothing. Then a few minutes later he drops a “hey man, I see you’ve got a really good team, so I’m really surprised to see that you’re this bad. I’ve never done so well against such a stacked team, actually…”

Ouch. Still no response from me. Just boiling anger.

I kept on losing and losing bad, so he kept on talking. “You should probably quit now. There’s no shame in quitting, you have nothing to prove. Please, really, it would save us both a lot of time.”

Instead of blowing up, I basically just shut down. Can’t talk. Can’t play. But I didn’t quit. I actually finished the game (mostly just throwing up random half court shots or fouling the guy to prolong the madness), and then when it was over I immediately put my pink diamond on the auction house and started pacing around the room.

Now for the record, my opponent wasn’t rude or boisterous. His chatter was very matter of fact actually, like he felt sorry for me. And honestly, that made it worse.

Once I finally was able to stop pacing, calm my mind and just breathe, I shut down NBA 2K18 and proceeded to delete it off my PS4. You know what, it was like a weight had been lifted off my shoulders. In that moment I decided that the game wasn’t fun, and I didn’t need that kind of frustration in my life anymore.

Then I started thinking about all the time I would get back, and actually found myself smiling.

I could write a novel. I’d like to think everyone has a great story inside them, it’s just a matter of taking the time to figure it out. Or I’d love to catch up on some of my favorite shows. Westworld is back, I’m already behind, and it sucks accidentally reading spoilers on the internet if you don’t watch the show live. Or, I’ve always wanted to learn a musical instrument. Guitar, maybe? Nah, drums would be better. They’re like the point guard of a band, dictating the pace and tempo. I could totally do that.

Then after a productive day away from the game, I considered unplugging my PS4 and selling it altogether.

How much valuable time have I wasted over the years with these silly video games? What could I have done with my life had I used that time more wisely? The experience of being humiliated was actually turning out to be pretty profound. Happiness, fulfillment and the Great American Novel were suddenly within my grasp…

But then I remembered The Last of Us 2 is coming out this fall. And the sequel to Red Dead Redemption. Oh, and of course NBA 2K19 will fix all of the problems we’ve complained about this year and be amazing. I can’t miss that.

Finally, I thought about the other guys I worked so hard for: Dirk. Scottie. Good old dependable Ron Artest. Those guys definitely don’t deserve to be quit on.

So I came back.

And now, post-Harden, I’m still in the process of retooling my team. Hopefully the new Premium Pack coming out this week will have awesome players because that MT from selling the PD is burning a hole in my pocket. I want to double, no, triple down on defense…any recommendations?

Oh and don’t worry, I still plan on trying to start that novel. During the couple of days I wasn’t playing 2K, I jotted down a few ideas, and sketched out a bit of a plot. I’m kind of excited about it, actually. Sure, it’ll be rough around the edges, as I’ve never written a book before, but maybe I’ll post a chapter here some week in the future…

Or, maybe not, as I’d hate that guy I played in Super Max to see it and leave comments.