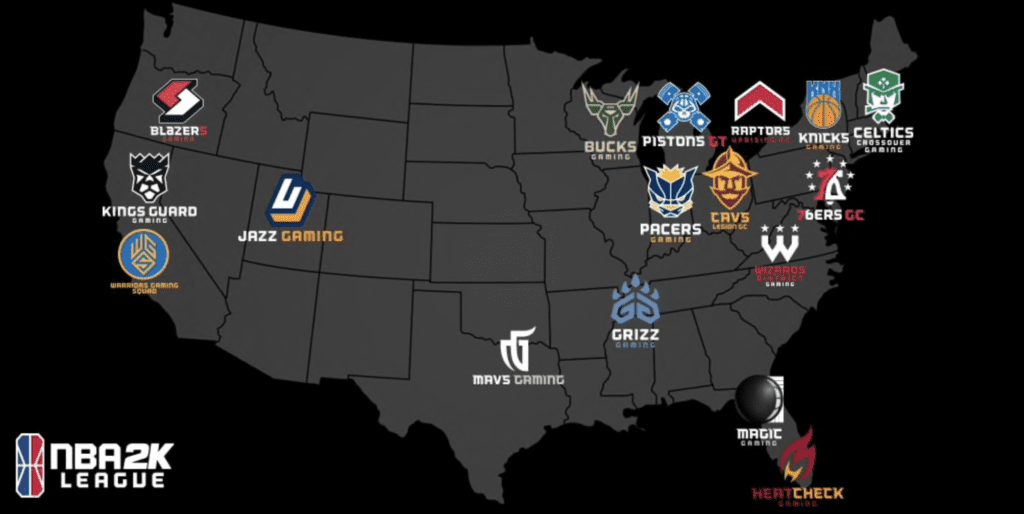 I did these Player Power Rankings for the preseason, and they’ve stood up fairly well over time, in that the many people who fell did so for the reason I suggested they might. Remember, these rankings aren’t based solely on in-game performance, but rather on a combination of performance, marketability and potential.

Just missed: Yeah I Compete (Jazz Gaming), oFab (Celtics Crossover Gaming), Boo Painter (Wizards District Gaming) It was a tough cut this time. Fab has been fabulous (offensively), and Boo has the counting stats and some good individual sponsorship.

The MVP of “The Turn” in-season tournament, lest we forget, was a late second-round pick — the only non-first rounder on this list. Blazer5 Gaming is 7-0 in the regular season. They’ve only lost one game all season (“The Tipoff” Final). They won the single-elimination “The Turn” as the top seed and averaged double-digit victories in doing so. MamaImDatMan deserves the lion’s share of credit for that. The point guard is arguably the most talented passer in the league and one of the safest with the rock. He’s a proficient, daring scorer as well. He IS Dat Man, Mama, and his play on the court and Blazer5 Gaming’s record won’t let you forget that.

How to stick: Keep this incredible play going. Some more personal sponsorship would help, too.
How to slide: While being undefeated isn’t the stand upon which he must hang his hat, Blazer5 falling from being the undisputed top dog will inevitably be coupled with a decline in play from this guy.

Radiant won MVP of “The Tipoff” preseason tournament, ensuring himself a leg up on the competition for this ranking. His play has continued to impress. 76ers GC (5-2) hasn’t been as dominant as rival Blazer5 Gaming, but Radiant has remained an explosive, dangerous scorer from deep and when driving to the basket. He marshals a frightening 3-point attack that torched Grizz Gaming in a 65-25 run in Week 6 and could feasibly replicate the feat against any team.

How to stick: It’s all about being next in line behind Blazer5 for now, whom Radiant might not face again until the Finals. Keep up the score-first mentality.
How to slide: Should 76ers GC fads from serious contention, blame will fall on Radiant.

Hood hasn’t played much in the regular season due to personal matters, but his return last week showed a return to form of the breakout star of “The Tipoff.” Hood scored 32 in a 29-point thumping of Heat Check Gaming. The man who made it onto SportsCenter, and who drew statistical comparisons to LeBron James, wields an incomparable scoring touch and more branding power than any player but Dimez. The more he plays, the more he cements himself as scoring leader and Cavs Legion GC as a true contender.

How to stick: Take a page from Uncle Drew (the YouTube one at least, I don’t know whether the movie version says this) and just get buckets. Everyone needs scoring, and everyone loves to market scoring.
How to slide: Turn out human.

The most dominant team in the league gets a second spot on the list, this time being the most dominant big man. Some questioned the selection when Walnut went 6th overall, but he proved himself eloquent in interview and trash talk alike. A double-double machine, and the defense’s toughest (wal)nut to crack, Blazer5 Gaming’s first rounder has been one of the best all-around players, and as such rates as the mid-season favorite for MVP. Blazer5 haven’t lost since the first week of May, and that wouldn’t be the case without Walnut.

How to stick: The undoubted way to stick is to win. Even if his counting stats slip slightly, Walnut is so bound up with the team’s overall success that — barring a shocking total drop in the performance — as long as they win, he shines.
How to slip: With great power comes great responsibility. Anything short of a championship is a failure for Blazer5 at this point. No one’s willing to roll over for them, so they and Walnut have to earn it.

Dimez is still at the top of the list. He’s done well on the court — over 20 points and 12 assists per game with generally good on-ball defense — to continually vindicate his first-overall selection. More important for this ranking, though, is the fact that Dimez remains the best-known and most marketable player in the entire league. His preseason media circuit, his sponsored individual gameplay, and his storied (well, stories for an NBA 2K League player) history of $250,000 winner and top overall pick make it so, and thus keep him in the top spot. The gap, however, is closing.

How to stick: Don’t just let your gameplay do the talking. Dimez has played very well, but he hasn’t been the best. Rather, more appearances, such as his showing at E3, and more individual marketing, such as his own HyperX giveaway, will keep Dimez on top.
How to slide: Conversely, gameplay is best poised to do him in. Slipping to simply being “good” won’t cut it. Nor will a Mavs Gaming overall decline reflect well on Dimez; the two are intertwined, though, which is the mark of a star.