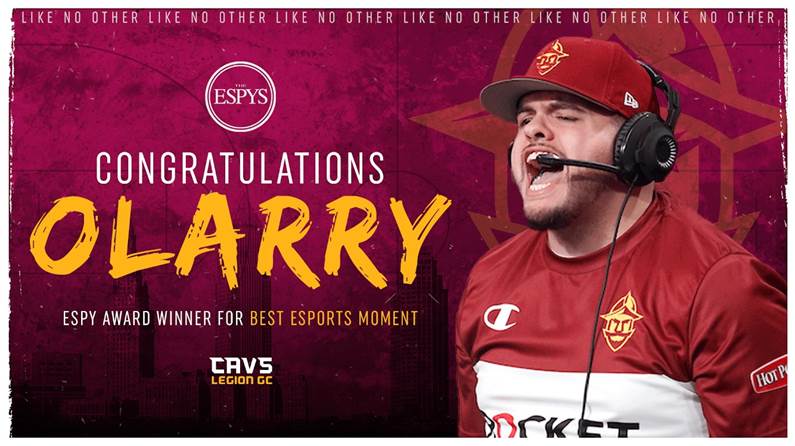 Tim “oLARRY” Anselimo, center for Cavs Legion Gaming Club (GC), has won an ESPY for Best Esports Moment for his return to the NBA 2K League after being shot multiple times at the tragic mass shooting at a Madden tournament in Jacksonville, Florida, in August 2018. The 2019 ESPYS mark the first time that an esports category is included in the award program that started in 1993 and recognizes Excellence in Sports Performance Yearly (ESPY).  Anselimo accepted the award on the red carpet ahead of tonight’s ESPYS at the Microsoft Theater in Los Angeles.

“Tim defines strength and courage. To overcome what he endured in Jacksonville is remarkable and a reminder to us all that anything can be achieved with hard work and an unshakable self-confidence,” said Jonathan Sumers, Cavs senior director of esports. “We are so proud of Tim, and we couldn’t be happier for him to bring home this award and become the first esports athlete in history to win an ESPY.”

Over the last three weeks, 16 esports moments went head-to-head in a bracket-style, online fan voting competition hosted on the ESPN website and on the ESPN Esports Twitter page. Over 230,000 votes were casted on Twitter in the final matchup yesterday that saw Anselimo’s heroic comeback best Ninja and marshmello’s win at E3 Fortnite ProAM for Best Esports Moment.

Anselimo, who sustained three gunshot wounds, one of which left his thumb detached from his hand, learned to hold the game controller differently and has come back to the NBA 2K League to lead Cavs Legion this season. Anselimo’s story was recently profiled by ESPN SC Featured.

The 2019 ESPYS will be hosted by Tracy Morgan and will be broadcast live on ABC from Microsoft Theater in Los Angeles tonight, Wednesday, July 10th at 8:00 P.M. ET.