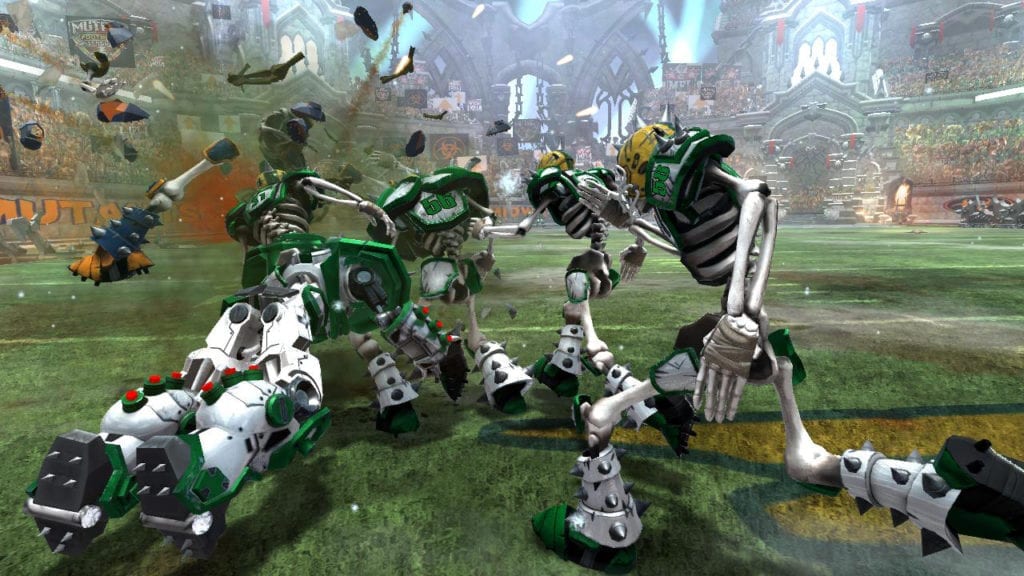 Mutant Football League doesn’t hide the fact that it is essentially updating a 20-year old Sega Genesis game. I mean, the name is barely different from EA’s original Mutant League Football. In many ways, the revisions are handled with a level of professionalism not typically expected from a small developer. Digital Dreams Entertainment really does a great job of making old new again. Yet, in its current state, the game feels just a little dated, specifically when looking at its feature set.

If you aren’t familiar (admittedly, I played more Jerry Glanville’s Pigskin Footbrawl than Mutant League Football) the original combined skeletons, aliens and robots on fields filled with crazy deathtraps. Mutant Football League keeps these elements intact, lovingly acknowledging its predecessor as it creates a new chaotic brand of football. While the theme sounds like it has a lot in common with games like Blood Bowl, this is honest-to-goodness football (mostly). You call plays, punt on fourth down, are on a clock, etc. — only your players can be outright killed during the course of the game.

In regards to gameplay, Mutant Football League plays very similarly to other modern arcade football games, down to the default control scheme. It is super easy to jump in and play, even without the game’s very handy tutorial. The only quirks here are a default game speed that’s just a bit too slow, very challenging AI, and a small but noticeable lag when passing. The first issue can easily be adjusted, and the second could easily be my PC more than the game itself. In general, when adjusted to “fast” speed I felt the gameplay was smooth, well paced and easy enough to grasp.

However, even if you are an NFL Blitz or Street veteran, you’ll have some new challenges to deal with. First, the fields are uniquely littered with landmines, spinning saw blades and the random spike pit. I can’t tell you how many times I tried to dodge a defender and ended up blowing myself up. What’s nice, though, is that the AI isn’t perfect either; you can use the field to strategically stop a ball carrier. Of course, the deathtraps aren’t picky — they’ll take down a defender as easily as a player moving a ball. And you need to be careful: in addition to getting outscored, you can lose by attrition.

Thankfully, the game makes it easy to see how close to death your players are, thanks to a clean graphic interphase that includes lifebars above each player. And these will empty over the course of the game, thanks to the nasty fields, nasty hits (during and after plays), and nasty maneuvers called Dirty Tricks. These limited-use powers offer everything from gigantic linemen to the ability to wield a shotgun. The most interesting, in my opinion, is the option to bribe the ref, which opens up a lot of strategy. If you bribe the ref first, you may get a very favorable call, either for you or against your opponent. This happened to me after scoring an unbelievable rushing touchdown; I was floored by the penalty but amazed at the perfect timing. You can also enact a bribe to negate one offered by your opponent. If all else fails, you can simply take out the ref too.

With a wide range of interesting Dirty Tricks that vary by team, it’s fun to try them all out. Mutant Football League helps users with some detailed in-game text for each trick.

In addition to a nice interface, Mutant Football League contains some really nice presentation elements. Commentary is provided by Tim Kitzrow, the voice of Midway’s arcade sports titles, including NFL Blitz and NBA Jam. His familiar voice really adds to the overall nostalgia factor, but is surprisingly graphic sometimes. Here, Kitzrow gets a little more adult than “Boom-shaka-laka.”

Graphically, things look nice, especially the stadiums. The player models are a bit too busy for my taste, especially when moving at high speeds around the field. But I never lost track of the ball or who I was, so their form doesn’t totally supplant their function.

The music is noticeably good, sounding like something you’d hear on a Sunday afternoon. Score overlays and playcalling screens are also nicely done. This looks like something you see on TV, if we lived in the post-apocolyptic nightmare world of Mutant Football League.

Like the original, Mutant Football League offers some clever puns in naming the teams and players. Hustle Killsome is the QB for the Microhard Mutilators. The Insane Cults took me a little longer to recognize than the Scarolina Panzers. This layer of parody makes the game seem fresh while also carrying on the traditions of its inspiration.

If I have one big complaint about Mutant Football League, it’s that it carries its predecessor’s lack of features with it into the future. You can play against the CPU, a local competitor or an online opponent in one-off games. There’s a relatively straight-forward season and playoff modes, with very little control of your roster.

It would seem that to really modernize a game like this, some kind of roster management or team builder is necessary. It would be awesome to customize a team using the unique player classes that match your play style. I’d love some kind of season mode where trades are possible, if not an offseason and the ability to sign star players. The developers have indicated that some of this is on the way, but for now, the feature set is pretty shallow. If you are looking for replay value, you’ll find it by unlocking some of the teams, and learning each roster’s strengths and weaknesses.

That said, if you are interested in reliving the hard-hitting arcade action of Mutant League Football, you will definitely want to check out Mutant Football League (confusing enough?). And, even if you never experienced the original, this spiritual successor offers a unique set of dirty plays and crazy players, all wrapped up in a quirky and crass sense of humor.