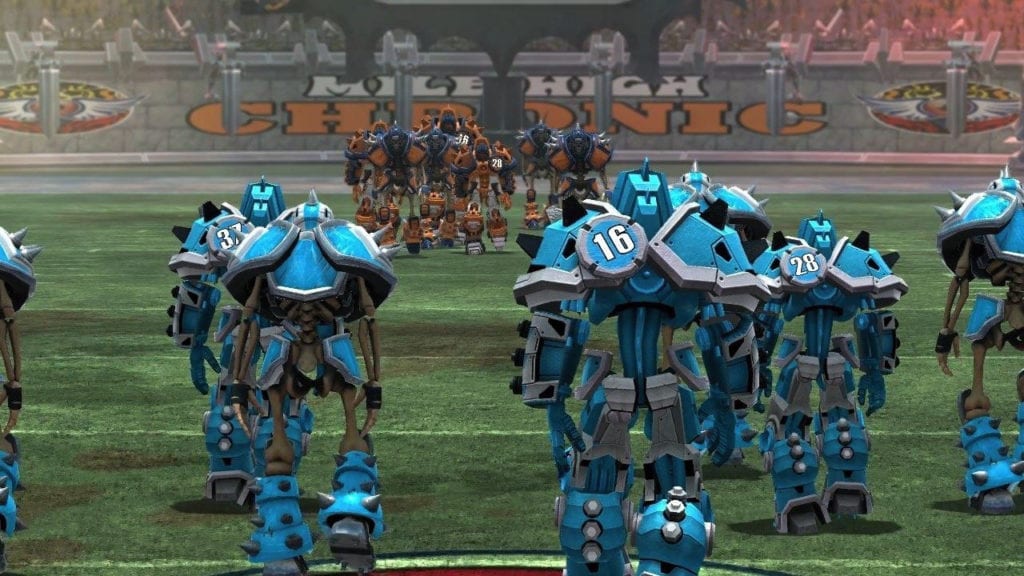 Shortly after my Throwback Thursday article on Mutant League Football, the sports gaming gods answered all of our prayers. One of the most beloved sports games of the early ’90s, is finally getting remade. Thanks to the help of a bunch of die-hard fans, creator Michael Mendheim was able to reach his $60,000 Kickstarter goal. If you have yet to donate and are still interested in doing so, click the link here.

After making a small donation to MFL’s Kickstarter, I received a code to play the game in pre-alpha. Here are my thoughts on a very, very early build of Mutant Football League (MFL). Although the game is still in pre-alpha, it immediately looked and felt the way you would expect from a modern day Mutant League game. Player models look great, and each of the three character types stands out from the rest. The skeletons are fast and have a more rounded skill set. However, since their bodies are made of bone, they break down faster than other characters. The big menacing orcs are stronger than most, but can feel weighted and slow at times. Fortunately, one hit with these big guys can leave a lasting impression, and usually results in a fumble. Lastly, robots have been added, and vary in size, shape and speed. These guys are able to withstand a hit, and can appear faster than some of the other characters.

Unfortunately, much like the previous game, MFL was unable to use officially licensed players and teams. It is believed that EA owns the rights from the previous game, so they were forced to rename every team, player and stadium. Some of the players you will find in MFL include: Dementia Freakman, Bomb Shady, Ghoulio Bones, Throb Bronkowski and Ratty Ice. Teams include the Nuked London Hatriots, Deadlanta Vultures, Blitzburgh Steelheads and the Croakland Invaders, just to name a few. Similar to its predecessor, MFL will have a total of 14 teams, with three additional all-star teams.

Stadiums look much improved, as do the death traps, placed strategically inside each individual stadium. Now, instead of fire pits and land mines — but yes, they are still in the game — MFL has added a giant, rotary blade that travels from side to side. This makes things even more fun and exciting for the user, who must now time the play just right. Furthermore, pools of acid line the boundaries, along with spike walls and other horrific contraptions.

MFL has added commentary this time around, adding former NBA Jam commentator Tim Kitzrow to the team. The late Derek Dziak also recorded commentary to MFL, but unfortunately passed away recently. (Our thoughts and prayers go out to Derek and his family.)

On a lighter note, the crude, humorous commentary keeps the game light, while adding another level than previous Mutant League titles. After big plays, players will shoot promos, belittling the opposing team and players. This game feels like the child of Mutant League Football, NFL Street and NFL Blitz. Although you are only able to play two full quarters in the pre-alpha, the game keeps me wanting more and more. Users are able to choose between four teams. Two of those teams are the Deadlanta Voltures and the Nuked London Hatriots. The other two don’t seem to resemble any football team: the Orcs of Hazard and the Tokyo Destroyers.

The gameplay itself is fast, and it takes a little time to get used to the controls. MFL is much deeper than the previous game, and gives users full control over the playbook. Pre-snap, things feel more like a game of Madden. There’s no hot routing or line adjustments, but you’re able to audible at the line of scrimmage. Another nice addition is the ability to view the play you called, prior to the snap. This helps gamers who might forget what plays they picked.

Ball carriers must once again rely on hurdling, fist-punching and lady-luck as they bob and weave around the obstacles scattered throughout the stadium. Several times I found myself with open space, only to get sawed in half by the rotary blade that move side to side. The land mines have also proven to be as difficult as I remember.

Another part of Mutant League Football that transitioned well is the ability for “trick plays” both on offense and defense. One of the plays on offense is the ability to use a chainsaw on a given play. Ball carriers then become equipped with a chainsaw, leaving a majority of the opposing team in pieces. Additionally, they have added a play that allows the quarterback to throw a bomb, exploding anyone within distance of the errant throw. Lastly, ball carriers are able to light themselves on fire, leaving a majority of their opponents in ash and rubble. Defensively, players are given the option to turn into a giant, three times the player’s size. This usually results in a fumble, and several deaths. Another trick play on defense is the option to become electrified, shocking everyone in their wake. These trick plays can be helpful in key situations, and should be used strategically. What To Watch For

Currently, the release date for Mutant Football League is October 2017. Some of the biggest studios in the world have to delay games due to issues that come up. It will be interesting to see if Mendheim and his team can finish before the deadline they have in place. Either way, I will be here anxiously awaiting each new build as it arrives.

Online play was unavailable in the pre-alpha, but creator Michael Mendheim said he believes this will be the core of MFL. With successful online play, this game will have unlimited replay value. I can’t think of anything more fun than competing against a friend or random player, doing everything in your power to slaughter the opposing team. That is what this game is all about. If I were able to take Mutant League Football from the early ’90s and bring it to the present day, this is exactly what I would expect. It was fun to see the game I admired as a child, all grown up. The graphics are improved, the gameplay is improved, and overall, Mutant League Football has been improved. If Mendheim and his team can fix the little things, and deliver on others, MFL has the potential to be one of the better sports games of 2017 and beyond.