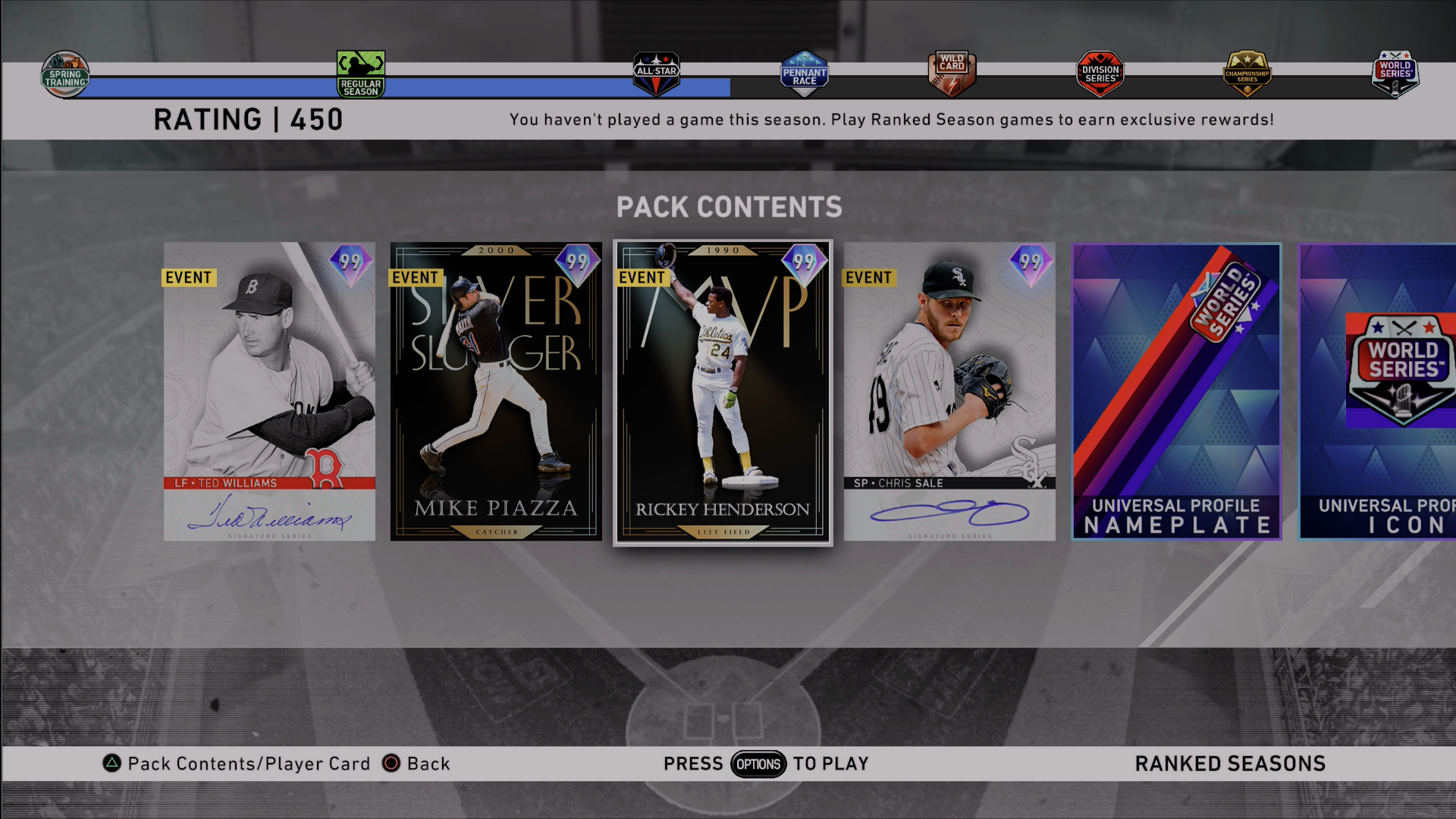 Season 6 of Ranked Seasons ended today, and that means Ranked Seasons 7 immediately begins in earnest. As usual, we have four new players added to the pool at the Pennant Race and World Series ranks. The two new players at Pennant Race are Signature Series Larry Doby and Future Stars Forrest Whitley. At the World Series level, we get Silver Slugger Mike Piazza and Signature Series Ted Williams (both 99 overall).

As has been the case of late, while the high-rated players are a nice add, it’s equally important that three of these players hit into the Signature Series and Awards categories for those still chasing down collections for the MVP Mike Trout.

Nothing changed between seasons as the developers are carrying over the players from Ranked Seasons 6 while simply adding the new players to the selection pool. This also means the players introduced in Ranked Seasons 5 are no longer in the rewards pool.

I have had really good success with the Prospects Forrest Whitley. However, I could also use another Signature Series player for Trout so I might still go with Doby. At this point in the game, a CF with only gold fielding probably is not ideal either, but Doby’s hitting stats overall look solid. When it comes to Future Stars Forrest Whitley, his pitch mix continues to be something that helps him a lot. He has a primary sinker with good K/9 and H/9, but maybe the lack of elite control will hurt him a little. All in all, my heart wants Whitley but my head says go Doby.

This is the second straight month of just absolute bangers for selections. First up, we have the Signature Series Ted Williams with maxed out contact vs. right-handed pitching and just about maxed out hitting overall except for power vs. left-handed pitching — which is still a respectable 100. In general, Williams has maxed out or near-maxed stats in every key hitting category. Of course, he only has silver fielding and can only play the corner outfield spots, but you know that going into things with Ted.

With Silver Slugger Mike Piazza, it’s the same deal as Williams just at catcher. He has maxed out contact and power vs. left-handed pitching and is now basically the best hitting catcher in the game. Of course, he only has silver fielding so you have to contend with that to some extent. Overall, I just hit too well with Williams not to pick him, plus Piazza has other versions in the game that are at least diamond already.