Today’s San Diego Studio stream focused on March to October and presentation, both of which provided some interesting nuggets for players to chew on just two weeks before the launch of the game.

There are two massive changes in this year’s iteration of March to October. First of all, team roster construction will take on a much more customizable life of its own in MLB The Show 20. San Diego Studio is introducing player call-ups and demotions this year, a welcome sight considering the resources the team is pouring into real minor league rosters.

Call-up opportunities will vary depending on the team and the strength of its farm system, the performance of the players at the AAA level, and the performance of the big league squad and its players. As the captain of the ship, you will have the opportunity to send down different players if you do elect to promote any players when prompted. This is not a pre-baked system, as different prospects will be given the opportunity for promotion every time you do the mode — it just depends on who’s hot and who’s not. 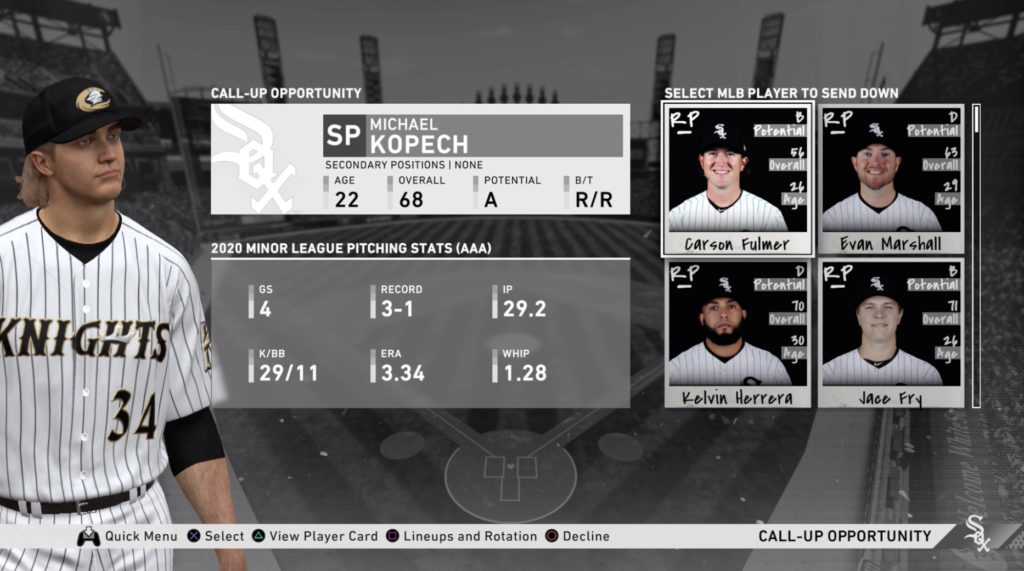 Your expanded ability to shape the roster doesn’t stop at minor league call-ups. New trade opportunities this year are in, and it’s a rather robust system. Last year, there was one trade opportunity each year, and it was only ever for a position player. This year, trades will happen throughout the year, and they will feature the ability to acquire pitchers. Users will have the ability to make “three, four, maybe more” trades in a single campaign. There is also a new feature that will allow you to see the potential lineup/rotation you’d possess if you elect to approve the trade at hand.

A new trade management hub will allow you to totally customize the players offered to you and sent to the opposition in return. It’s essentially a buffed up trade block system, allowing the user to set incoming trade offers based on positional needs, player characteristics needs (speed, contact, power, prospects, etc.), specific players to target in trades, specific players you’re looking to shop, as well as the ability to set your untouchables list — players you refuse to move in any deals whatsoever. There are a lot of new variables and pseudo-virtual messaging that will allow players to write their own story in March to October. 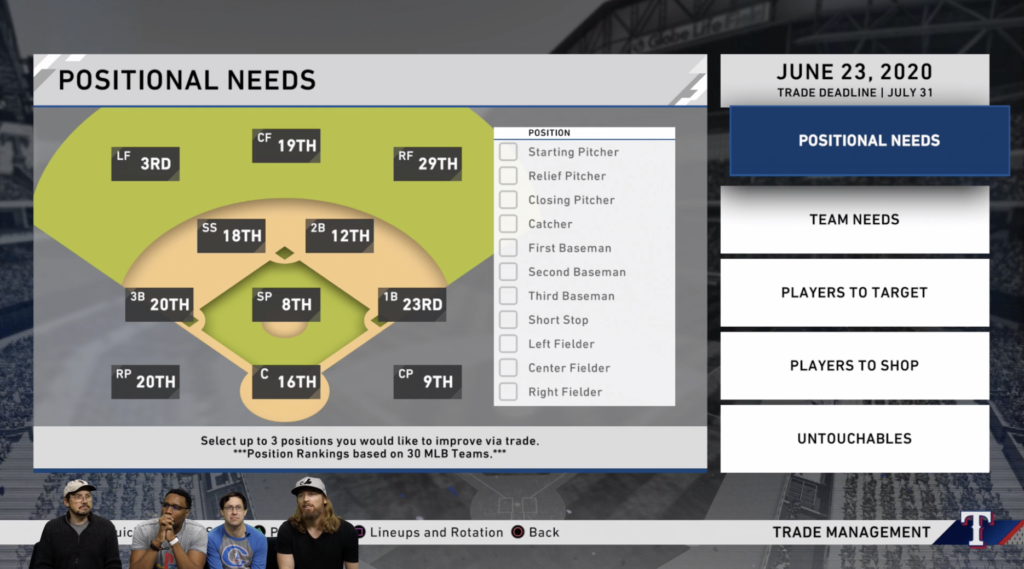 The rewards system has also been completely rebuilt, and will now reward players for simply playing the mode to specific points in the season. Last year, you had to win the World Series to claim any Team Affinity rewards. It was boom or bust. This year, it’s a little different. World Series victories will still offer the top prize, but there are now five different gate checkpoints where a user can earn loot. The first of which will take place at midseason, based on your performance over the first half of the season. You’ll also have reward opportunities at the end of the season, the end of the divisional series, the championship series, and of course, the World Series.

Another big change is you have the ability to repeat whatever checkpoint gate you’d like, so if you lose the World Series for example, no need to smash a controller, just try again. These rewards all still tie into Diamond Dynasty. 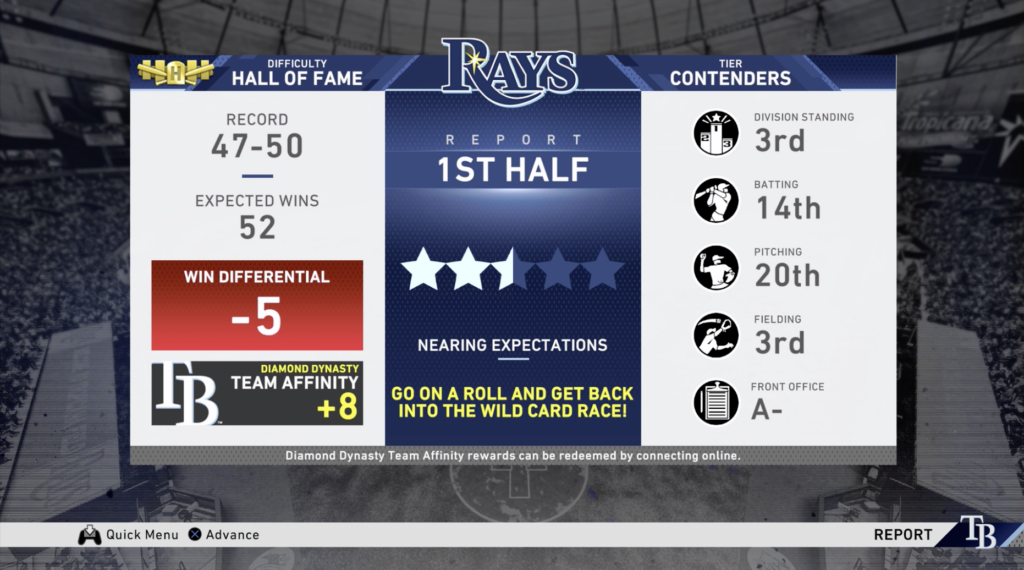 Performance rewards for March to October will be unveiled, at least partially, on Saturday’s stream.

Elsewhere in the mode, dynamic difficulty is now in, as well as beginner for those not even ready for rookie difficulty. March to October now offers for greater variance in situations and high-leverage circumstances. High-leverage situations will most commonly be when your team is trailing and in need of a big at-bat. 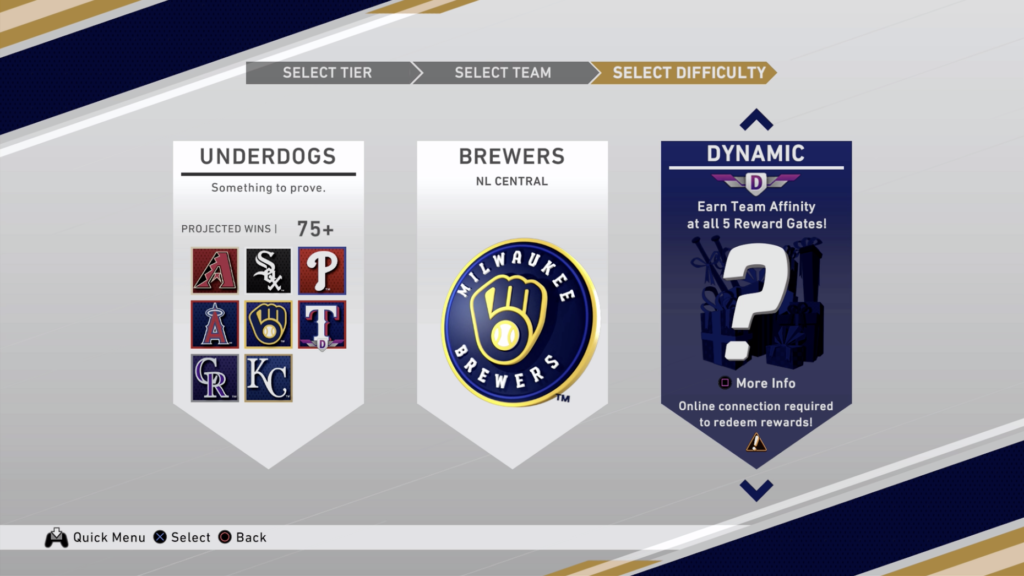 Presentation got some nice upgrades in MLB The Show 20. The new opt-in replay system was built primarily for online play, but will be featured all over the game. If you want to watch a home run replay and rub it in your opponent’s face, or skip right through it like you’ve been there before, you now have that option.

There will now be a new MLB The Show theme with a new UI and other presentation options built into it. The score bug will be interactive and far more dynamic than other score bugs and systems of the past. The theme will now highlight trade histories of a player, their country of origin, their playing career, where they were drafted, as well as more common statistical references throughout the game. 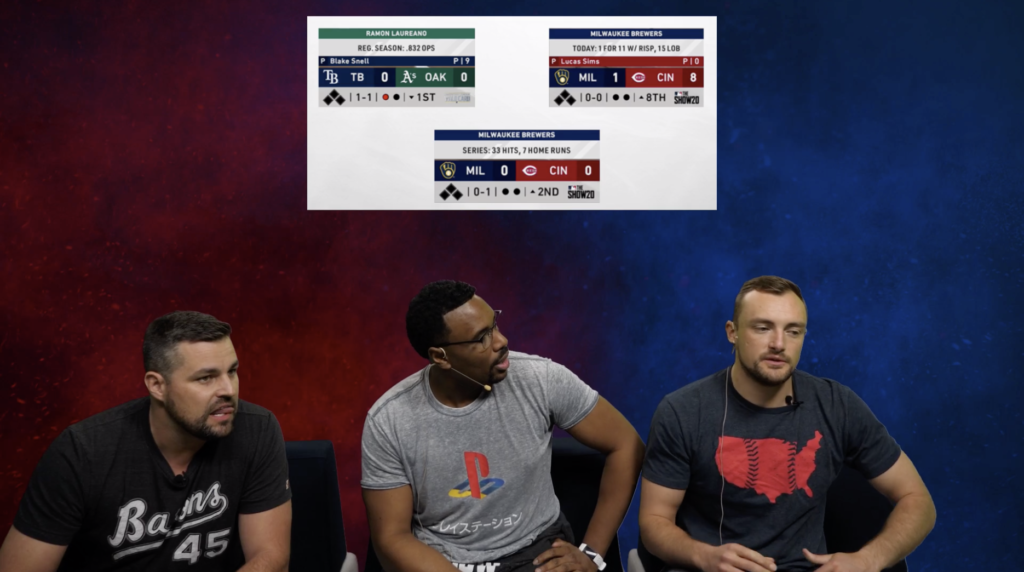 Transitions to and from replays will be much, much quicker, speeding up the game a bit.

As mentioned previously, there are tons of new bat flips and bat slams, as well as plenty of new animations pregame and postgame. There will also be a lot of new Statcast information in-game.

Three separate Moments themes for UI and everything else depending on era: Anything before 1969, 70s-80s, 90s pic.twitter.com/EkVTBywnoi

Finally, there will be plenty of new commentary, including but not limited to, rebranding/relocation, custom leagues, Road to the Show, as well as correct pronunciations for over 1,600 minor leaguers included in the game.

So how much of this March to October stuff makes it to normal franchise mode? We hope the trade block and dynamic difficulty gets there, but it was slightly unclear coming out of that stream what would be in both modes. The older presentation themes would also be nice to have for things beyond Moments — especially if we create old-school leagues — but it seems like those presentation elements will be tied to just Moments for now. We suspect this is because they did not have enough time to totally re-brand all the UI to make it fully functional for things that are heavier on data and presentation than a Moments challenge. This also probably ties into why we only have two themes now for presentation (rather than three). However, the new UI they showed off is an improvement, so if it took losing a presentation style to get there, we would be fine with that trade off.

Craig Biggio joins the legends in MLB The Show 2020. Also, Tom Glavine, Greg Maddux and John Smoltz have been added as pre-order diamond pack options for those players that buy the game early and earn that bonus. There is still one more legend to be revealed for the pre-order bonus pack, and that will be unveiled during Saturday’s stream.

Saturday’s stream will focus on Diamond Dynasty and, as always, we will have full coverage. More legends will be revealed, as well as new pack types, new card types, and new rewards to be earned while playing the mode. Just a couple streams to go before the launch of MLB The Show 20 on March 17.