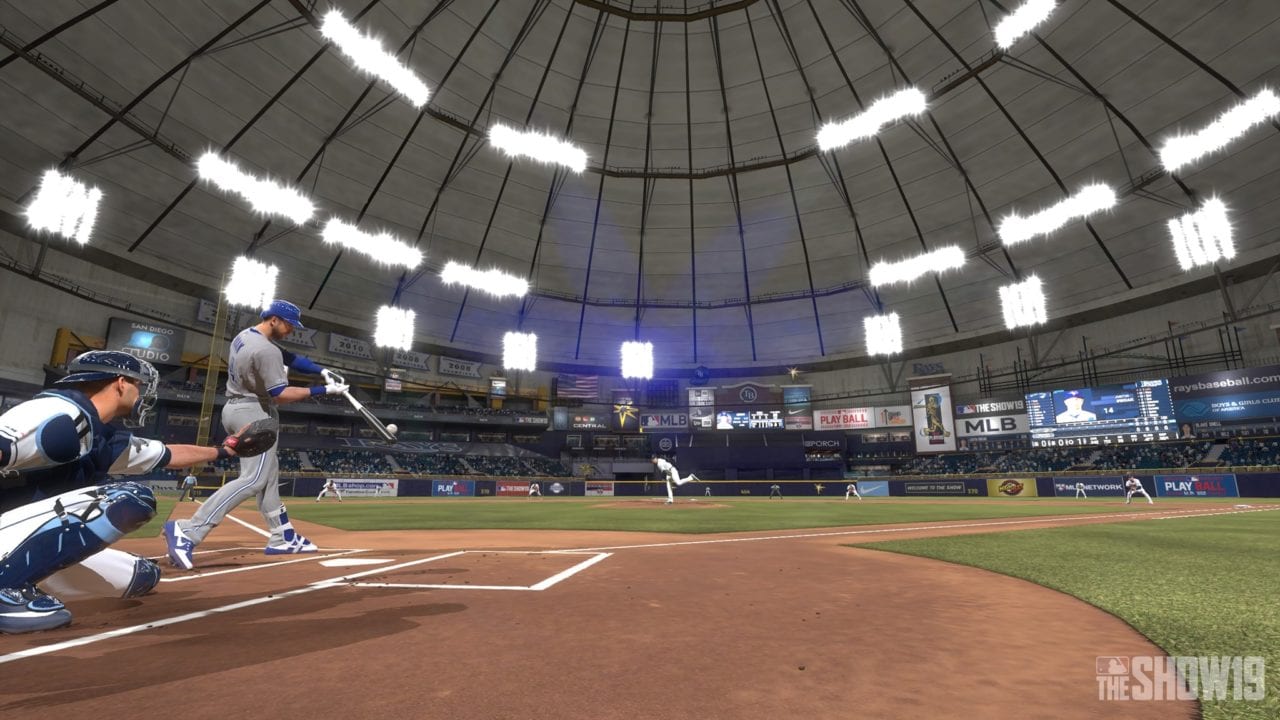 One month (give or take) into The Show and my opinions remain, for the most part, the same as they did when I first reviewed the game. Since my review, the Operation Sports Full Minors rosters were released, marking to many players the “official” beginning of the game’s cycle. Many, many thanks to everyone who worked on and put those together. These breathe new life into franchise mode as well, which I covered in-depth here.

The Show still constantly rewards you just for playing the game, and the rewards often feel very well worth the time. At the conclusion of seemingly every other game, The Show gifts some sort of treat for my DD team, which absolutely encourages a few more games. A reasonable value for the trade-in missions encouraged my participation in those as well. Though some still linger, Moments appear to have noticeably less luck-based requirements, which is great for those of us who just want to hop in and enjoy the scenarios as opposed to grind for hours.

Way Too Many Errors

To put it bluntly, the amount of in-game errors is shocking. It almost feels as if the game logic awarded the player safe passage to first base in some capacity, but it could take a bizarre ricochet or curiously errant overthrow to get you there. Outfielders frequently miss routine fly balls in the outfield even if they are gravitating towards or underneath the fielding icon. Infielders get eaten up by nonthreatening exit velocities, often without needing to move more than a few steps in a single direction. They will drop balls on the transfer that they will have milliseconds ago speared off of a tough hop, get lead feet when chasing down a slow roller between infielders, and throw their bodies at the batted ball like hockey players attempting to deflect an incoming shot by any means necessary. Even catchers have resumed their inability to stop passed balls from 2018’s release, though the frequency as which they do is much less egregious. On top of that, those passed balls don’t lead to runs nearly as often, which is also a welcome change.

Errors with this regularity destroy the flow of gameplay in every mode. March to October playoff games suddenly turn Gold Glove hopefuls into blindfolded tee-ball outfielders. For example, in a 1-1 game in the top of the ninth inning, two runners on, two outs, and a routine fly ball is hit to center field. George Springer, standing under the icon after ranging maybe three feet to his right, misses a can of corn and allows two runs to score as the ball rolls to the fence. It sure does make the eight-plus hours put into the mode feel like a frustrating waste of time. Even worse is in online play, when three-inning games can be decided in a similar manner.

I completely sympathize with and encourage the secondary and out of position defensive penalties. However, something needs to be done for defensive-oriented outfielders. It is common practice in both baseball video games and real-life managing to move primary center fielders around to the corner outfield positions. However, even a gold center fielder patrolling right field instead of his designated center is akin to that of your last-minute softball sub who you needed to put somewhere or else your team would forfeit. Incredibly poor reads that steal precious seconds off of his pursuit and clumsy out-of-character drops are unrealistic for defenders of that caliber. Yes, players should be punished for attempting to play Paul Goldschmidt at catcher, but there should be much less of a discernible tax on center fielders playing in left or right.

Baserunning remains problematic as I routinely get thrown out with 95 speed 74 stealing Jackie Robinson while players with speed ratings in the 70s and even 60s glide across the diamond. Pick-offs remain so frustrating that they deem stealing frankly not worth the risk, eliminating a sizable component of baseball strategy. Road to the Show and Player Lock do a great job of alerting players when pick-offs are coming, and perhaps this could be better implemented to other modes instead of the current randomized automatic outs.

Additionally, baserunners will suddenly lend remarkably poor judgment on batted balls into the gap. Doubles and even triples that are noticeably clearing defenders’ grasps will occasionally force runners to hold between bases as if they were tagging up. This is a nightmare when this small speed lapse can convert what should have been an automatic run into an out at the plate or a pickle between third and home.

Hitting, too, has taken a turn towards becoming frustrating, presumably after one of the game’s patches.  Fly outs and line outs occur at an alarming rate as batted balls shoot across the screen like heat-seeking missiles locked in on fielders’ gloves. The difference between some no-doubt home run animation hits and some routine outs is remarkable, as regrettably, good timing on squared up pitches within the PCI does not always equate to solid exit velocity, much less a hit. This does appear to be more of an issue at higher levels in ranked play — where it too often feels like soft contact and subpar timing lead to better outcomes than good timing and good contact — but it’s still something that overall feels more pronounced than it was at launch.

The Game Is Still Great

All told, MLB The Show 19 remains a tremendous joy to play, but recent patches have converted the game into more of a randomized experience than the exceptional on-field gameplay the title boasted for the few weeks after launch. No matter the difficulty setting, the game can take a turn for jarringly difficult or offensively easy. Some games see the ball flying off the bat with ease while others find players unable to squirrel more than two hits off of a bronze or common pitcher. The game appears to be navigating two identities: either the nerfed hitting, impossible baserunning, and error-ridden frustrating Show or the ultra-engrossing, hitters’ and pitchers’ clinic fun Show that showcases how the great the series is. What is frustrating is that this problem lingers both in offline and online modes, and you never know which version of MLB The Show 19 you are going to get.

Cancel reply
Discussion
Click here to reply to the discussion
Continue Reading
You may also like...
Related Topics:spotlight