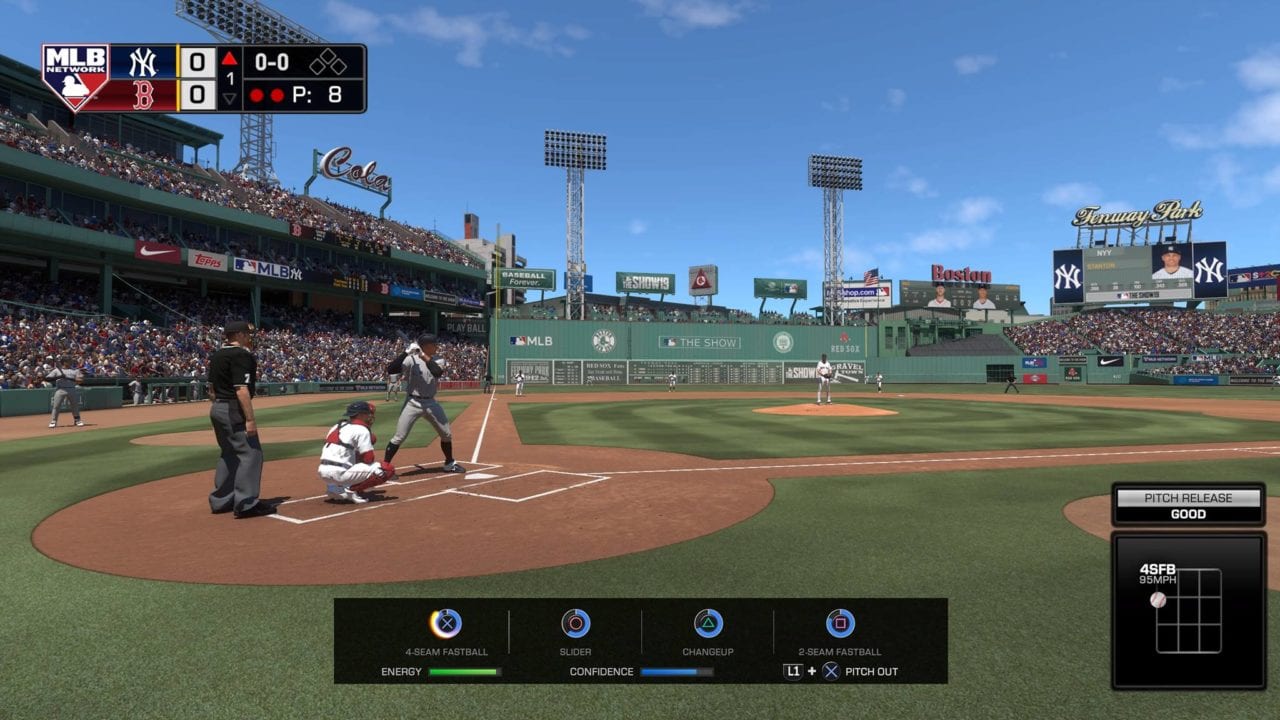 The release of MLB The Show 19 is, for myself and many others, the official beginning of the MLB season. This year’s release has its occasional hiccups, but this is the best on-field video game baseball in years.

Veterans of the series will immediately notice how responsive hitting is. Players can chase balls outside of the zone, square up pitches, and poke others where defenders are not regardless of the count. I have triggered multiple no-doubt home-run animations after squaring up a pitch in an 0-0 count on higher difficulty levels. I rip base hits down the line now. Pitchers jump out of the way of batted balls (they still get hit, but only occasionally instead of once-per-game). The CPU makes fielding and throwing errors now. In short, The Show is a hitter’s paradise once more and feels very, very different. Players are thrown into an unusually zoomed-in batting camera — one that more closely mimics what many online fanatics already were using before this season — and an unusually zoomed-out fielding camera. I have yet to change either setting. The batting camera yield greater emphasis on reading pitch movement, which works wonderfully with some of the redesigned hitting. Punishment for early count swinging has been considerably reduced.

It only takes tracking one outfield flyout with a speedy outfielder for veteran players to feel the difference in defense. Players glide, do not get trapped in pre-set animations, and do not botch routine outs just because they are partially not on the field indicator. Poor defenders occasionally get slower reads on ball angles or drop outs, while better defenders can read how balls will hit off of the outfield walls.

I have really, really enjoyed Moments so far. A narrative-based twist on last year’s Programs with an added challenge ladder centered around baseball history. Rewards are cumulative and worthwhile for Diamond Dynasty players, and the mode truly shines in high-leverage, short-duration scenarios. Going back in time is a blast even with anachronisms such as Steve Finley, Michael Brantley and Jeff Bagwell hitting in the same lineup, or Babe Ruth in front of an MLB.com advertisement. Restarts are immediate but you have to wait until after the play is done. This gives users a taste of elite Diamond Dynasty players, which is a great way to push you towards Moments and towards working to acquire other elite DD cards as well. The mode has its drawbacks (more on that shortly), but it  will be interesting to see how these grow throughout the season.

Two months ago, I was wondering if this would be the first year in my life since the mid-90s I would not purchase a baseball game. Today, I am combing the Community Market once more and looking for any and every opportunity to grow my beloved Diamond Dynasty squad. If you are unaware, much-desired updates to DD include XP earned in every mode going towards DD rewards, the removal of collectibles, the shifting of exchange missions to optional, Community Market prices and immediate “Sell Now” options displayed on cards as you acquire them, multiple lineups (but make sure you set them as primary before playing), a minimum sale/purchase offer that falls within a card’s average value, multiple (and some smaller) Conquest maps, and quick stat comparisons between players. There really is something for everyone here, and what feels like almost constant rewards makes your team feel like it is always growing. If you’re a DD fan, you’re in for a treat.

A small but great new feature: the pause screen now shows much more data in an easy-to-read manner without having to climb through a maze of menus.

The Near-Perfect Road To The Show

Road to the Show is exceptional. It was great last year as well, but some good tweaks put it in a bit of a sweet spot. Players can finally choose the team that drafts them, and RPG-style in-game skills are baked into progression trees. It truly possesses phenomenal depth and has been polished to near perfection this year. The dynamic in-game challenges, where you select what you think your player can pull off in certain plate appearances, were an excellent touch. Don’t forget, you can build up your career as a college player before jumping into the draft with performance boosts after each year. It would be great if this was a two-second button push instead of multiple years of showcases and drafts. Otherwise, the lack of two-way players and customizable archetypes can hopefully be remedied in the next release cycle.

I treasured Critical Situations in franchise mode. I take multiple franchises with different teams into multiple years, but I’m never playing the full 162 games. Key Moments were an exceptional way to add narrative and replayability to franchise mode for those of us who simmed a lot of the calendar but still found time to play. March to October could be a better fit folded into a franchise mode option instead of a standalone mode or even replacement of season mode. Each month takes about an hour or so depending on your difficulty level, and it has Diamond Dynasty incentives. Consider it a shorter, narrative-driven XP grind, if that is of interest to you. I always appreciate the developers’ efforts to jazz up the series’ perennial offerings, but the watered-down season mode does not offer much in terms of replay value. If I were going to take one of the Longshots and try to win a World Series, I would do it in franchise mode where I have more control over the entire organization and careful player acquisition. That being said, the mode does a great job of mixing in a variety of missions, and none of them are ever too time consuming. How great would that team-specific video be before you start franchise mode? I just wonder if this would be better suited as an enhanced franchise option instead of a full-blown mode.

Moments have a handful of luck-based missions that feel especially difficult due to elements of the game outside of the player’s control. One instance is re-creating Jose Bautista’s epic bat flip from the 2015 ALDS. All a player has to do is hit a home run to pass the mission. The home run felt impossible despite squaring up the ball in all sorts of different counts, and it made me dread any instance where a home run is a mandatory part of the Moment. Three hits in a row missed a home run by mere feet. Sometimes the CPU would throw four straight balls. It made me very hesitant to attempt a Moment with a mandatory home run requirement, and unfortunately, there are tons of them. I find myself blindly swinging for the fences in multi-game home run requirements, abandoning all other baseball strategy just in the hopes of getting these dingers out of the way as soon as possible.

Another is being player locked as Babe Ruth to pitch a complete game shutout in the World Series. I found myself surrounded by randomly incapable defenders that would see a routine chopper that required zero range bounce off of their glove in one at-bat only to have the same defender make a Nolan Arenado diving stop in the next one. After losing the Babe Ruth challenge for the third time in a row to the same hitter in the same inning, I found myself very disinterested in trying it again. These random luck-based missions can greatly hamper the fun and flow of the mode. It is frustrating to figure out that on the first day of the game’s release, I will likely not complete a handful of the programs due to their mission requirements.

One of the hottest topics surrounding this year’s release has been the improvements or lack thereof to what was once the driving mode behind purchasing a perennial sports title for many folks. And, frankly, outside of razor-sharp presentation, very little feels new. Many requested features, such as relocation, team creation, a stadium editor, and three-team trades still remain absent. Budgets remain difficult as well. Adhering to the game’s wonky budget also yields a “Franchise Budget” section where you can buy extra money for free agents with Stubs. While maintaining a budget can be fun, MLB The Show 19 unfortunately remains too messy to even bother with it. Turning off budget restrictions before starting a franchise remains the best option. Regardless, it is still tremendously fun to hunker down and take ownership of a team from top to bottom.

A Terrance Gore drag bunt remains a success almost every time I try it, which does wonders for some of these peskier Moments, but can be immensely frustrating online. Pickoffs remain completely impossible. The game decides whether or not your leading runner will be picked off with almost automatic timing. It hurts a fundamental component of the game as players with a 94 speed rating will get stuck in quicksand before reaching second while the computer has divine ease swiping the same bag with a low-70s speed baserunner. This has been an issue for a few years now, and this studio generally does a great job of addressing the series’ exploits and breaks. Here’s hoping that baserunning and pickoffs are next.

MLB The Show 19 has easily the sharpest baseball gameplay in years and is a clear improvement over its predecessors. The on-field product is tremendous, and feels both varied and rewarding. It is a must-have for series newcomers, longtime veterans, and even fans who have skipped a year or two. Franchise mode did not receive the boost that fans were hoping for, but it remains an engaging experience. SIE San Diego Studio has done well to innovate the game and franchise, and I am thrilled to see what the studio puts out next year as well.