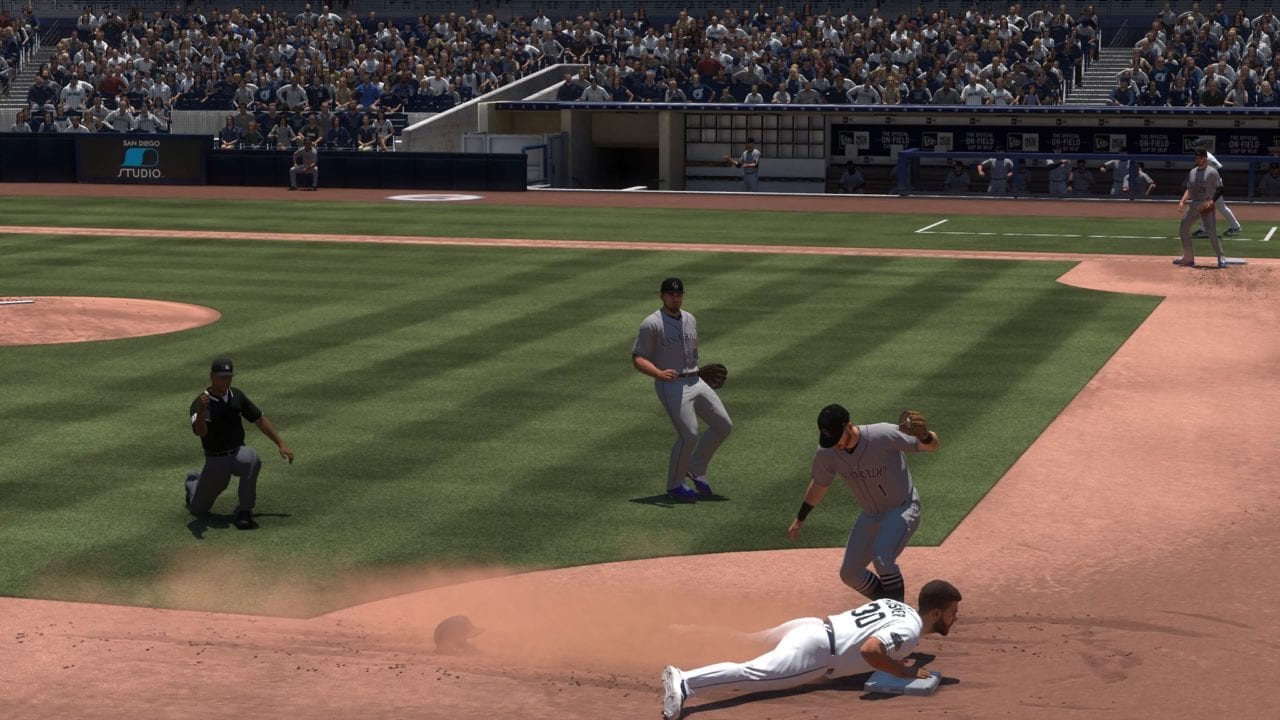 A summer-long franchise was synonymous with baseball for many years. It remains a test kitchen, a way to rewrite history, a great educator, and a marvelously interactive way to spend the season. Personally, I use franchise mode for all sorts of different experiments. I use it to stay as concurrent as possible with the real-life Astros season, conducting a full multi-season rebuild with OSFM rosters, and answering questions like “would a team of just Texans outperform a team of just Californians?”

The point being, franchise mode can still be this playground for various ideas you come up with, but it’s a mode that also needs to give you the tools to create these new experiences and moments.

I was somewhat disappointed by the lack of updates to the mode altogether, but thanks to the noticeable on-field gameplay improvements in this year’s title, franchise mode remains an incredibly immersive experience. True, the updates are fewer and farther between than previous entries, but it still makes for a great time.

It was nice to be able to extend players amid the league-wide movement to lock down homegrown superstars, but the options remained limited. I was still able to sign both Dallas Keuchel and Craig Kimbrel to one-year deals at under $6 million each before the season started. I fumbled through August waiver trades and was not notified when my free agents signed with my team. Some older (Sergio Romo) and random (Dexter Fowler?) — but perfectly capable — players retired at the end of the 2019 season.

Real-life baseball is rapidly evolving. Trends catch on quickly in an industry where any sort of competitive advantage is tirelessly analyzed and on public display for 162 games. Data-driven managerial aspects of the game have been implemented (shifts are more noticeable than ever in ’19), but there is still tangible freedom complicated or completely blocked by how franchise mode is structured now. Again, the on-field gameplay brings new life to franchise mode, but I could not help but throw together the following list of ideas for the mode’s eventual reconstruction.

Shifting is present, but the opener, four to six-man rotations, international free agency, and two-way players all remain absent but could truly increase the game’s already sky-high replay value. Could franchise mode take a feature from RttS’ archetypes and have franchise archetypes? What about the ability to shift to and from a six-man rotation midseason as prospects tear up Triple A or pitching depth takes a toll? Baseball is rapidly moving away from traditional structures, and we should have the freedom to not only do the same, but also carry the experiments even further (such as bullpen games for an entire season).

The trouble with baseball’s draft is that even the most elite talent will take their lumps in the minors for a couple years before getting called up. A franchise and even an entire league can look incredibly different in its third year when that happens. To truly provide an immersive draft experience, scouting and the draft need to be revamped. International Free Agency is missing altogether. All of my scouted players for the First Year Player Draft felt useless again. I gravitated towards the blue chip prospects and sorted by accuracy for the rest. Draft class editing existed during the last console generation and is currently live in Madden 19, and the Roster Vault is a perfect opportunity. Sure, 40 rounds is overkill, but maybe SDS expands the draft past its current iteration of six rounds. The thrill of landing a Nolan Ryan in the twelfth round, an Albert Pujols in the thirteenth round, or a Mark Buehrle in the thirty-eighth round is tangibly real for every MLB team every June, but could certainly be a tall order to implement in The Show.

The current trade screen has the easily resolvable problem of having too much dead space and not enough information displayed. Why not make it mirror franchise’s roster screen? Re-purposing it to show more than just five players, adding the ability to sort by various statistics, or even introducing international bonus money as a trade commodity could improve one of the most exciting elements of the mode. While not as complicated as three-team trade logic, MLB teams can add more than three players to a trade, so we should be able to stack assets in franchise as well.

Critical Situations For Other Franchises

Let’s say you are controlling the Houston Astros, and you are neck-and-neck with the upstart Oakland Athletics for the AL West crown. The A’s are playing the last-place Texas Rangers towards the end of September. What if a critical situation found you playing as the division-rival Rangers to take the series from the Athletics since it would tangibly impact your own franchise’s playoff chances? And how fun would it have been to play as Adrian Beltre sitting at 2,999 hits in 2017? Even though he’s on the Astros, jumping into a Beltre player lock to get hit 3,000 would have been a wonderful refresher in an already varied experience. It will be interesting to see if elements of March to October or even Moments get folded into franchise mode in the future.

The Elephant In The Room

Regrettably, there is a gargantuan hurdle that could be preventing a drastic franchise mode overhaul: baseball’s looming CBA issues. While I want updates like relocation and a stadium editor as much as anyone, I can understand SDS for holding off until the CBA is resolved before investing significant man hours and development time into the mode. Sweeping changes to the mode are, unfortunately, best suited for when there is a clearer picture of how certain elements will or will not shake out (such as the real-life complete removal of August waiver trades and reduction of September callups). A sturdy and comprehensive transformation of franchise mode is inevitable, not just to appease longtime fans, but also to keep the game on par with the real-life shifts in how baseball is managed.