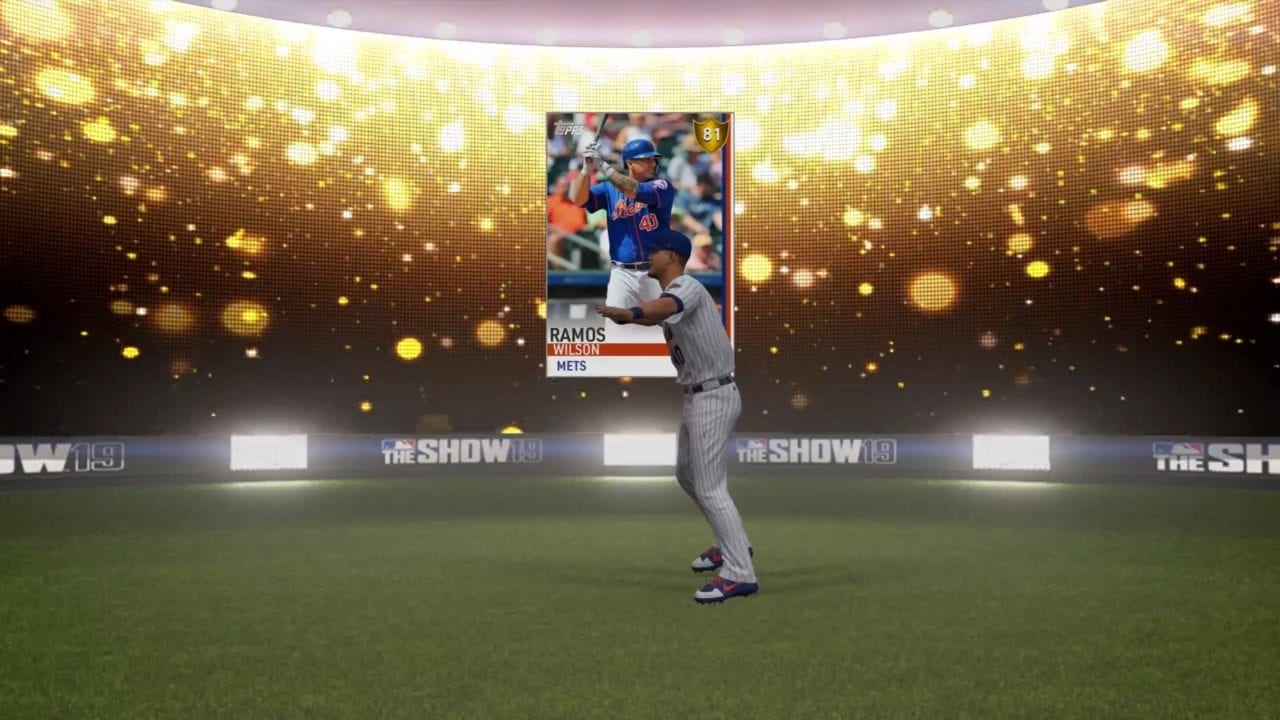 Stepping into MLB The Show 19’s premiere online community experience diamond dynasty, my expectations were tempered. In previous years, the tricky formula of card-collecting in sports gaming felt like it was a bit on the overwhelming side for the mode to be truly ‘fun’.

With a clunky user interface and a cacophony of ways to play, a steel determination was a must in order to learn the ins and outs.

With MLB the Show 19, everything in Diamond Dynasty is presented just a little bit clearer. The gameplay modes are a little bit more intriguing and the menus a little more kind on the eyes.

Those eyes wandering to the top right portion of the screen, I noticed the elimination of ticket counters, the currency of grinders. In previous years, tickets were a specialized currency within the game used for collecting target cards. Largely these were used to obtain certain cards to help complete set programs.

However, the ticket system was not feasible to those unable to dedicate a large amount of time to grinding, and so began to feel like a chore.

By removing them, MLB the Show is inviting players to acquire the game’s best cards by the most novel of ways: playing the game in the way you want to play it.

No more are you required to slog through specific situations with specific teams or players (although you can still do it this way if you desire). The introduction of XP Reward Path is quite possibly the thank you letter long-time Diamond Dynasty players have been waiting for.

Any mode, from playing a franchise game to competing in the returning Conquest mode will earn XP, unlocking new content and packs along the way. Simply exploring the different modes and coming to find a slew of new packs ready to open was a revelation, helping the collection feel more organic and less of a part-time job.

March to October and Diamond Dynasty are Kin

A new experience, a sort of season mode called ‘March to October’, allows you to play only the key bits of your selected team’s journey to the World Series. While many who choose this are looking for the more traditional ‘no-frills’ season experience, the XP gathered while doing so looks to entice them to Diamond Dynasty once completed.

In fact, it feels as if XP’s broad reach is an invitation from all types of players to converse in Diamond Dynasty. It’s a clever design, but whether it entices players to jump into card-collecting is yet to be seen.

The most noticeable new mode is known as ‘Moments’. This invites the player to relive some of baseball’s greatest, well, moments. I was pleasantly surprised to see video packages at work, bringing a gravity to Babe Ruth’s story.

This helps lend to a feeling of gravity about what you are trying to accomplish during a challenge. ‘Moments’ could have easily been overlooked in its presentation, so these videos are a nice touch. 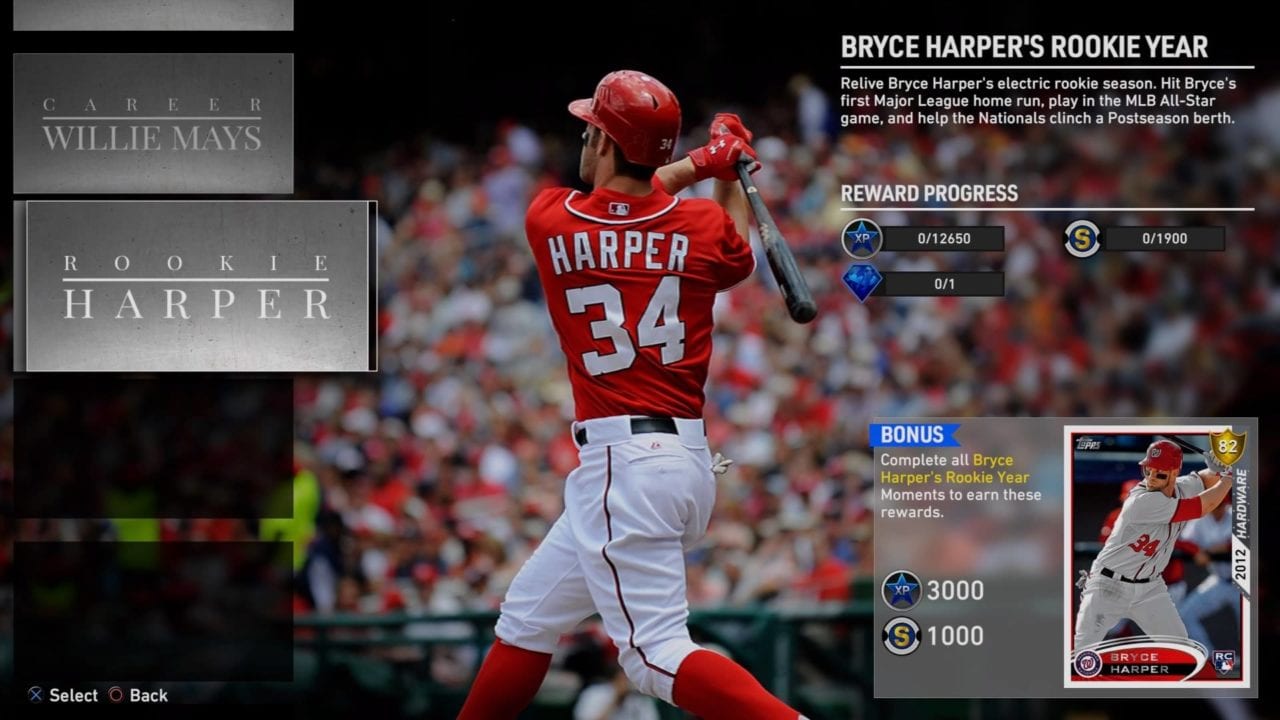 The experience of the mode itself is hit or miss. Playing as these legends is a novel outing for sure, but too many of the mode’s missions feel like filler. For every memorable final inning shutout, there is a slog to get a certain type of hit. This often results in an overworked ‘retry’ selection, slowing down the momentum and charm of a mode with real promise. 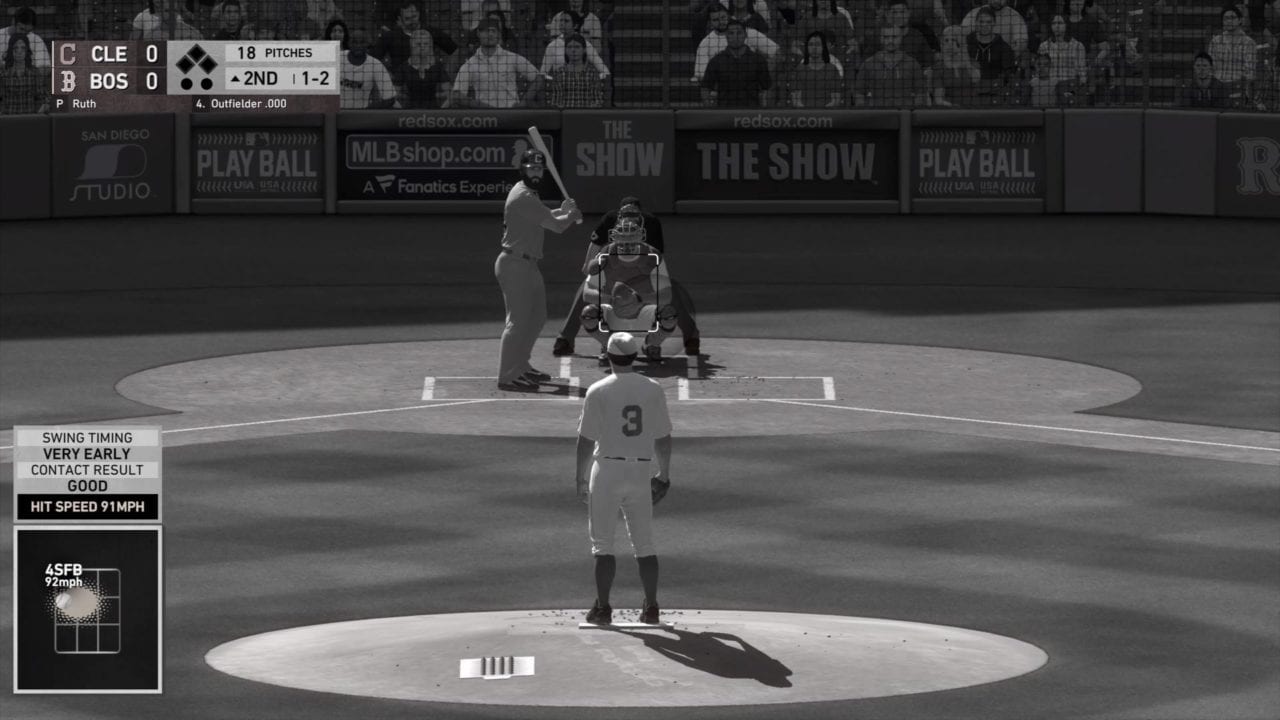 With ‘Moments’ in its infancy, perhaps focusing the situations in the future will help the mode feel more special throughout. If I am required to essentially play multiple innings of baseball, sometimes over multiple games, then I’m simply playing a baseball game, not a ‘moment’.

Even so, I cannot deny the charm it carries on the missions done right. Even my non-sportsy fiancé got a kick out of the vignettes and the black-and-white presentation of Fenway Park, with a monochrome Green Monster.

Team Affinity is yet another path toward XP, allowing you to simply do what comes natural to sports fans; pick your team and play with them. This feeds into the Diamond Dynasty experience by presenting a constant sense of progression, eventually leading to a reward worthy of your team fandom in the form of high-level club legends. 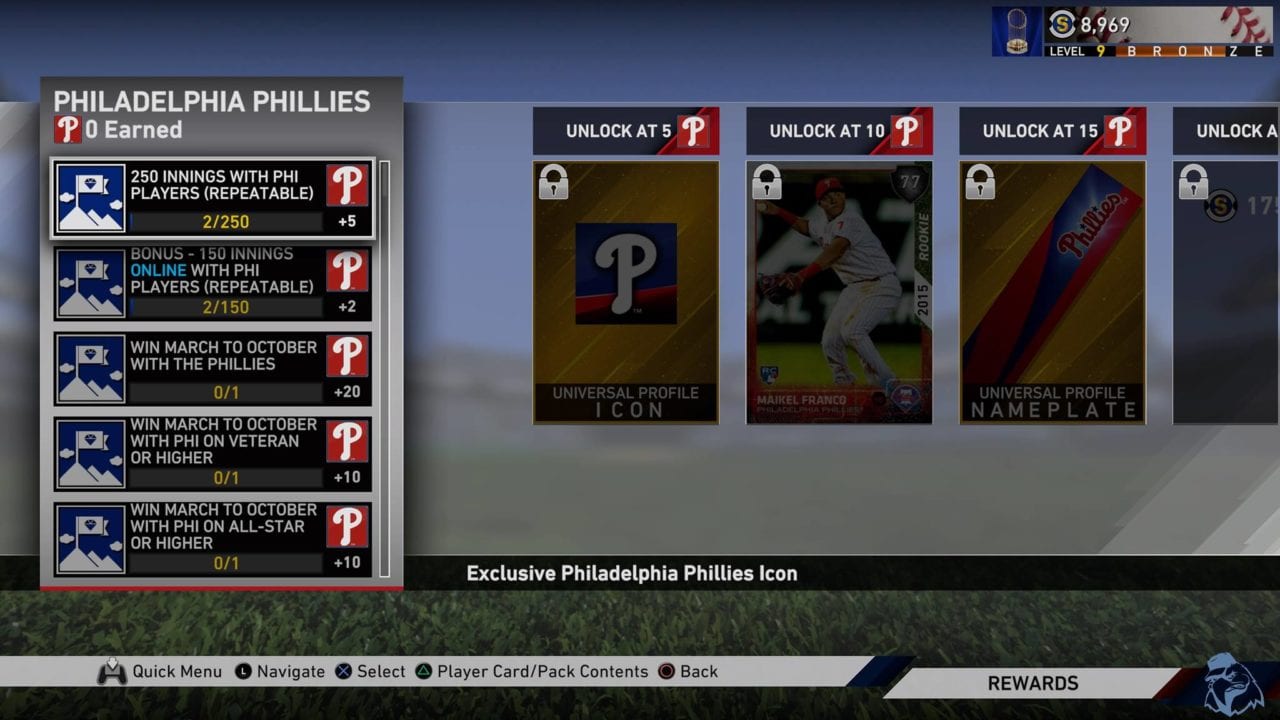 This feeling of making the experience your own is extended through choice packs, where you will decide what to acquire from the opened pack. This allows further customization by way of filling out a roster hole or grabbing a piece of equipment in need of an upgrade. 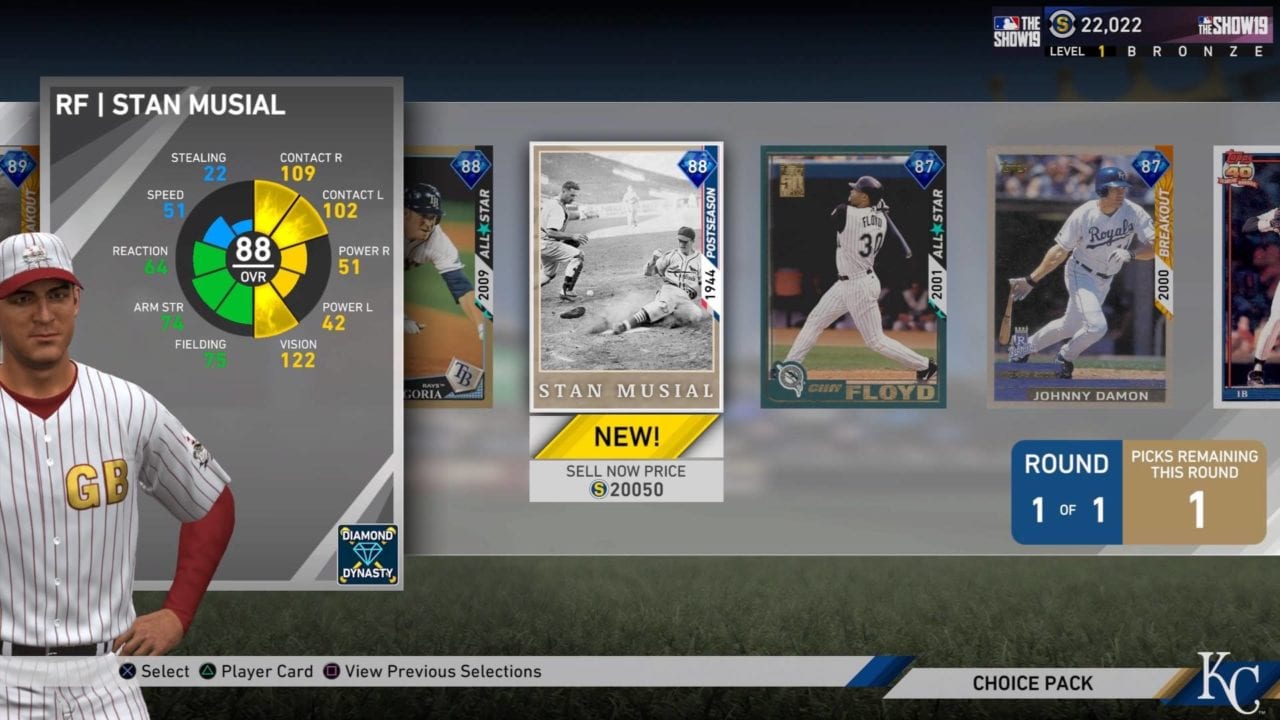 Other Odds and Ends

In several ranked seasons matches, gameplay felt relatively smooth, particularly compared to what we have sometimes seen near launch day. Out of ten games, two ended in disconnection for unknown reasons. The first early, the second while I was down in the 9th inning (for which I got a win).

Battle Royale returns, offering one complimentary entry before costing 1,500 stubs a go. This isn’t an unreasonable price, considering the rewards that are capable of coming from this mode if you make a decent run against other hopefuls. The mode is one of the more intriguing, allowing temporary access to cards one may never actually own.

With the playing field leveled, it’s simply three innings of skill in a double-elimination format. This continues to be one of the better recent additions to Diamond Dynasty.

In order to grab those all-important stubs, moving unwanted cards on the community marketplace remains the de facto method of harvesting. With the XP Reward Path in play, sellable items will also become more prevalent.

If you are one determined to avoid microtransactions, MLB the Show seems to be inching closer toward balancing the experience for those not willing to essentially pay for the Show multiple times over.

A small but ample change comes in the form of being able to sell those new items when first drawn. You are immediately presented with an option to quick sell or sell at the highest stub price currently on the market.

This should take away some of the ‘busy work’ done in players’ collections to get things to the marketplace, although it should be noted that the traditional method is in play if you leave the pack opening screen. 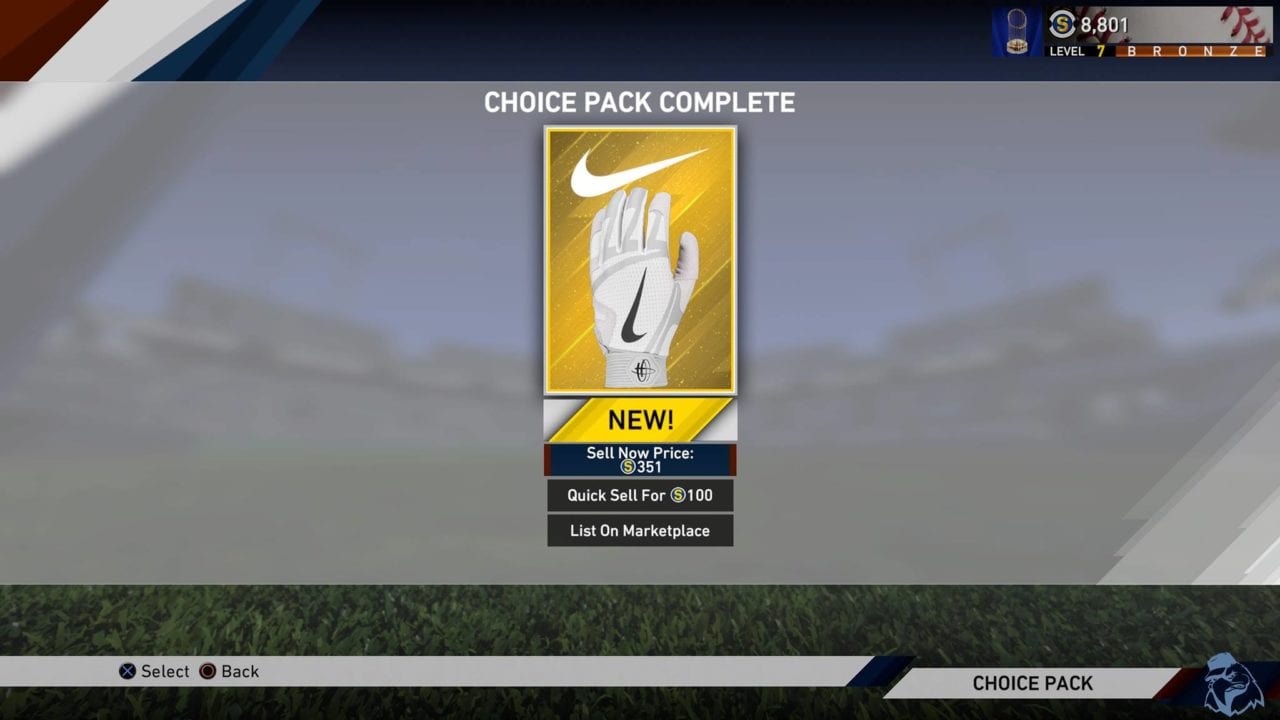 Perhaps the biggest question mark for my experience so far has to do with what Diamond Dynasty is at its core. Besides the usual suspects, such as ranked matchups, there is a lack of opportunity to actually field your unrestricted dream team. While Team Affinity and Moments add their own flair, they feel like they are in the service of gaining more rewards.

But when we open our rewards, and we draw that next Cooperstown resident, how often will we actually see their talent showcased on our permanent team? The path forward has been set by making the ways to earn XP more personalized and fun, but what is the destination?

If that end goal is built, I believe they will come.