The second half of the NFL 100 linebackers and defensive linemen was released this morning. It’s one of those rare times in these modes where the development team actually held the better half of the reveals for the second set of released cards.

(Seriously, for whatever reason in these card-collecting modes, most of the time in extended promos the best players are revealed first and so then fans are just constantly underwhelmed by what comes after. Developers need to work on balancing out these reveals in a general sense as was done here.) 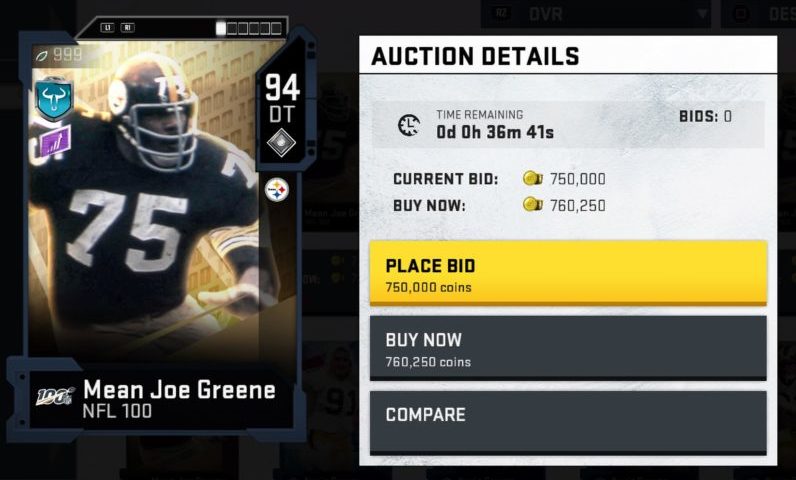 If Lawrence Taylor was meant to be the QB crusher last night, then Mean Joe probably fits the bill as the dude who is going to help blow up running plays today. In run plays, he’s going to shed a ton of blockers both based on his abilities and the base 94 block shed. You can move him to defensive end if you really need to in a 3-4 scheme, but either way Greene was put on this virtual field to blow up run schemes. 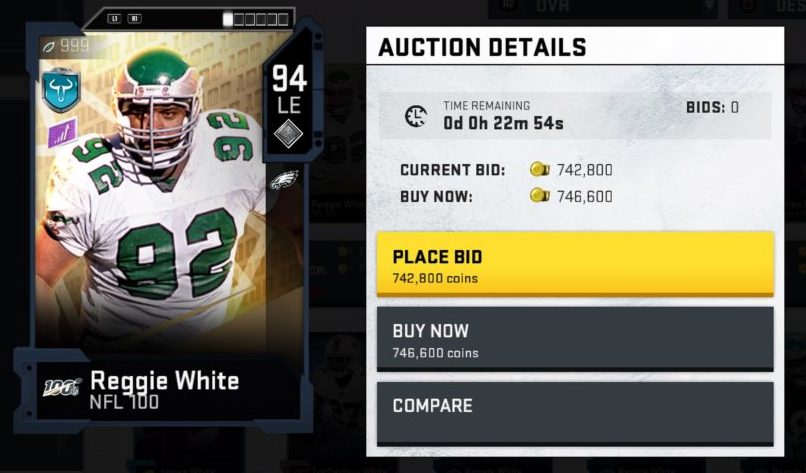 White is another popular MUT player who was already in the game in a lower-rated form. He stands out maybe even more than LT last night in that his role as an end is going to work no matter what style of team you run into, even if he doesn’t have the top-end speed of LT. He’s going to be terrific with 94 block shed, and he will be just fine against run-heavy teams. If you run into a pass-heavy team, then his strengths will shine even more as he can get to the QB in a variety of ways. 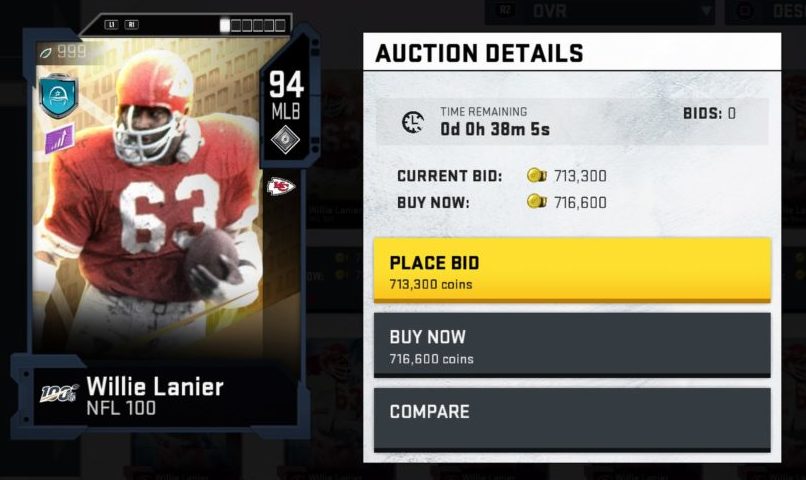 Overall, all three of these cards stand out from last night’s in that they just provide more balanced skills. I don’t 100 percent trust Lanier to chase around running backs or tight ends when not being user controlled, but he’s going to be good in zone coverage in most contexts, and his speed is solid enough to get to where he needs to before using his great block shed to blow up plays. Lanier is going to be good against both the run and pass and he makes it hard to decide who is the best player from this trio of NFL 100 Legends. 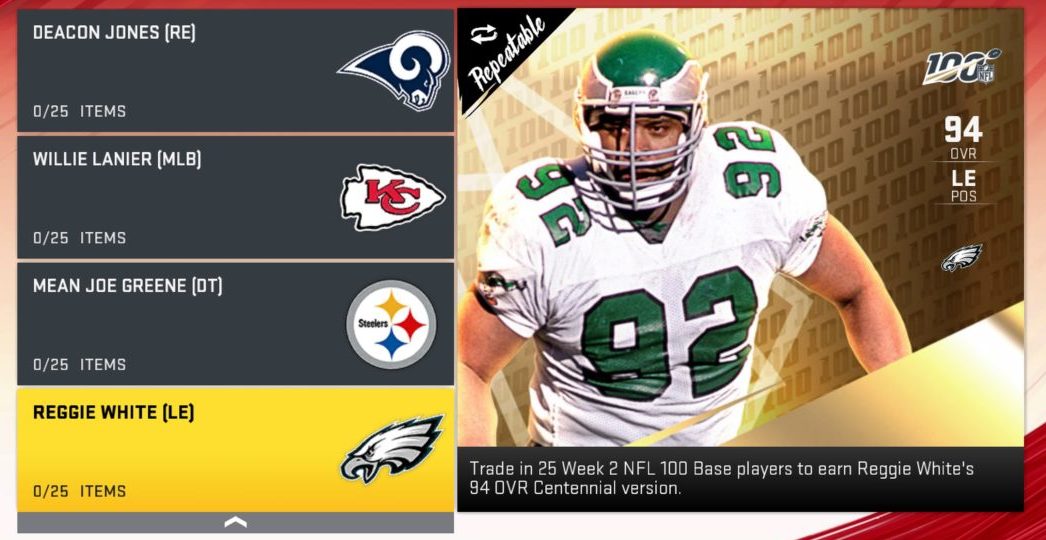 This wraps up Week 2 of the NFL 100 reveals. Overall, the first night felt a little underwhelming when compared to the insane running backs released last week. However, the volume of players here, and just how good all three players today are, balanced things out now when looking at both sets of reveals.

For those unaware, you will need to scoop up 25 versions of the “base” players from this week’s reveal, much like how the other NFL 100 sets work, to level up these defenders to 94 overall — if you don’t want to simply buy the powered up version in the auction house or don’t rip it in a pack. You can see t hat breakdown below: 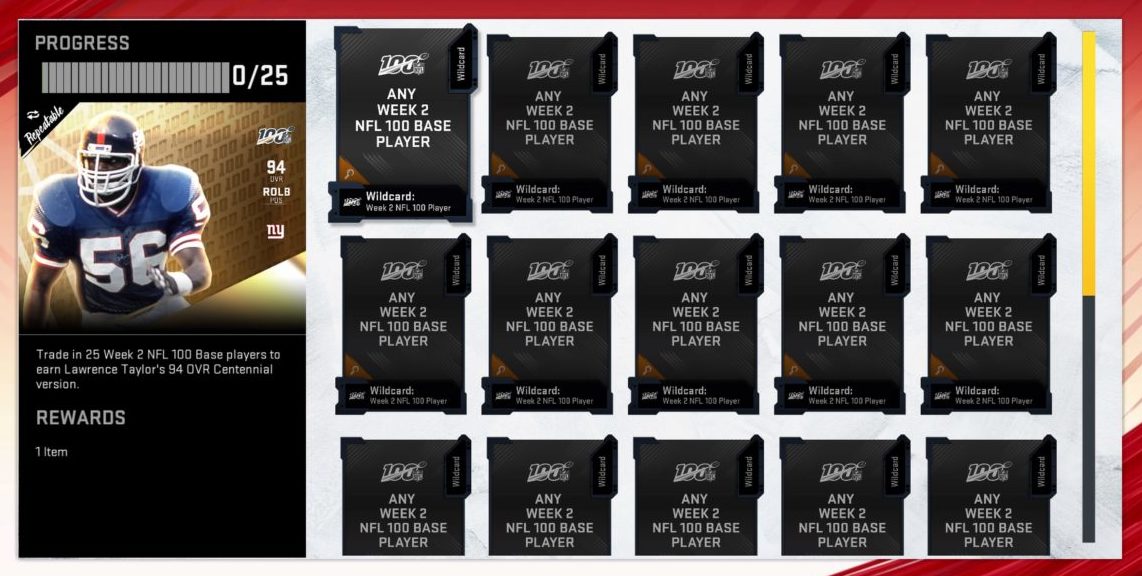 In addition, the new Solos are out for these players as well:

These Solos continue to be worth doing because you get one of those Power Up items after each completed Solo. On top of that, knocking all of them out for this set will get you the “base” version of your choice for one of these players.

On top of that, if you stay up with all of these Solos throughout the six weeks of reveals, you’re going to get a Centennial Fantasy pack as a reward (albeit it will be untradeable).

All in all, EA is doing good work so far with these NFL 100 reveals. If these cards are meant to be the best at their positions at least until spring, then so far those things are lining up. It does make some of the other card releases and the Blitz promo feel underwhelming in some regards, but I suppose the conceit is only the most hardcore folks are going to get the majority of these NFL 100 players anyway.