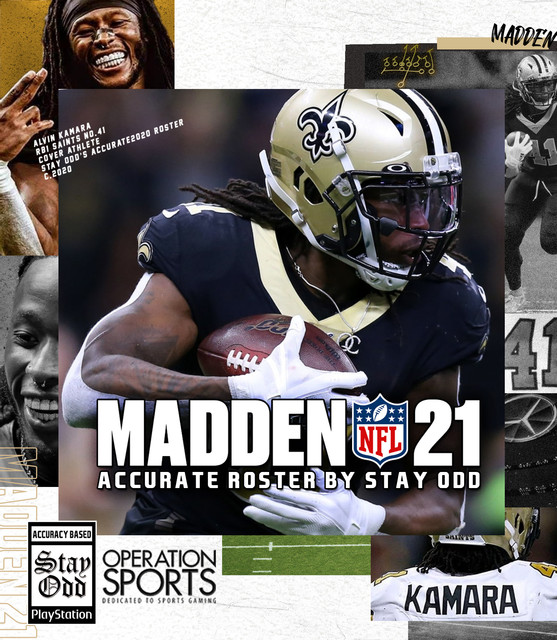 If you’re simply looking for free agents and a Madden 21 roster that is mimicking the ongoing offseason, I have already covered options for the Xbox and PlayStation consoles. However, if you’re looking for an experience that may alter the gameplay more than by simply changing around personnel, then might I recommend StayODD‘s Madden 21 custom roster that is built around performance-based ratings adjustments. The adjustments carried on through to the end of the normal season, and the same goes for the depth charts.

Again, the Madden Share has been a little touchy as of late, so if you have problems downloading the roster you can try to brute force it and just keep spamming it until it (usually) works. Another method that sometimes works is going to the “creator’s content” that you’re searching for and downloading from there. Also, this is a PS4 roster file, so you can’t download it from the PS5, but you can use it on PS5 by importing a CFM from PS4. On top of that, the roster has been tuned first and foremost for PS4 (gameplay is somewhat different on next-gen consoles), but I’ve seen people mostly say the roster still works even on PS5.

In terms of sliders, most folks I’ve seen using Mike Lowe’s set, Matt10’s set, or G’s set. That does not mean you need to use any of those slider sets or any sliders at all, just trying to give a heads up.

With that, I hand it off to StayODD to explain the roster.

First off I want to thank Cycloniac, Unfadeable, Schnaidt, Armor and Sword, Mike Lowe, McCringleberry, Matt10, JoshC, Jcblayze and many many more for their input, work with sliders, draft classes and roster sets over the years. I wouldn’t have been coming back to OS without their work year in and year out so huge shout out to them!

About me, I have been a long-time user of the Operation Sports forums, dating back to the painful PlayStation 2 memory card transfer days. I have always come here to see what the top roster and slider editors around have to offer for Madden, 2K, and The Show and read up on their beliefs on how their changes affect gameplay.

Do I agree with every aspect of their changes? Simply put, no, but I respect the time and effort everyone puts into their own version as it helps me generate a better understanding of what I in turn will do with my own. Say what you will about how any rosters that are built and what they believe is the best for their style of gameplay, but until you take the time to build your own I really think it is unfair to harp on whatever route they decided to go.

I spend countless hours adjusting ratings for Madden, 2K, and The Show and up until recently I really never thought about sharing any of them. But given the time I always put in, I figured now is as good of a time as any to share my work.

With the start of any good construction project, there is a great foundation. How does that apply to this roster set you may ask? I start from the bottom up. Yeah adjusting the talent at the top of the league is important as it affects gameplay directly, but anyone can adjust ratings and make sure the best players in the league are in fact the best players in the league. What I feel is missing in most roster sets is the bottom end of the roster.

If you only play Play Now, you may not care if the rotational D-lineman ratings on the roster you play with matter, or if the majority of the practice squad players are on the roster. I, on the other hand, find it extremely important that the players on the roster and their ratings for any team I play with are accurately depicted as I typically play CFM and find that extremely valuable to the overall experience of that game mode. Now that is not to say that I don’t care as much about the top end of the rosters, because I do, but diving deep into the bottom end of any roster edit ensures longevity and playability for my CFM in my opinion.

Let me start by saying this, I have spent many hours adjusting ratings for this roster and put in the work and research cross referencing multiple sites in order to reflect current production and performance to this set. When I say reflect current production, that does not mean that someone who is under performing this year is necessarily rated lower than someone out performing them in the league. Circumstances are different for every player on every team, and I adjust based on what I personally think is an accurate depiction of their regression or progression throughout the season.

I cross reference Pro Football Focus (I pay for an ELITE membership for gambling purposes) and Pro Football Reference. I use PFF for player grades, and I use PFR to compare their grades to production. What does that mean? PFF grades each player based on performance per snap in each given aspect relevant to his position. Some players who are non-starters grade much higher than starters. Does that mean they should be rated higher than the starter on the roster? More often than not, no. I am a firm believer that NFL coaches know more about why someone isn’t getting snaps than I do, but players grading higher than starters probably shouldn’t be rated a 55 in Madden 21.

In short, I look at these grades and look at the production, which then leads me to the ratings. If a player is graded poorly on PFF, ranked 60th at their position, and ranked #4 in Madden, I consider them to be regressing and make an adjustment. Does that mean the player should be ranked 60th in his position group in Madden? No. What it does mean is that he is not as dominant as he was last year, or over the past few years, and he needs to be adjusted accordingly. The same goes for players ranked in the top five on PFF and 60th in Madden — see Rams RB Darrell Henderson for progressing, or Raiders C Rodney Hudson for a regressing player.

I put a lot of time cross referencing PFF and PFR to adjust ratings accordingly across the entire roster set, but ultimately I still use my general knowledge of the NFL to reflect the ratings. In the end, all I am doing is using a few different statistical-based tools to guide me throughout the ratings adjustment process. I will say that one area I really used PFF as a firm guide to ratings was with the offensive line. PFF does a great job grading offensive lineman in run blocking and pass blocking situations. I used those grades to reflect each offensive lineman’s strength one way or the other (for example, a player’s RBK grade is higher than his PBK, I reflect that strength in the player’s rating).

As far as the depth charts go, I use Pro Football Focus for positions and starters, as well as ESPN and Ourlads for the back-end of a depth chart. I have adjusted a few players’ positions based on where they line up on the majority of their snaps. PFF does a great job tracking snap count based on position, and I reflect that in player positioning on the roster.

If you value an accurate and up to date roster, depth chart, and overall ratings I feel like this roster is for you. If you are looking for OBJ to be a 95 to make crazy catches or Tom Brady to be a 98 because he is the greatest of all-time, I can assure you this is not your roster. At the end of the day, all the folks in this forum and on this site are looking for a roster set that best suits their style of gameplay and there are sets for every type of play on here. If you are not a fan of this one, feel free to check out other users who have put in the time and effort to give you a roster set that might better suit your gameplay.

Some might not agree with every ratings adjustment I have made, but the beauty of Madden is that you too can adjust your roster as you see fit. I am merely giving you what I believe is a great canvas to paint that picture on. Be your own Bob Ross and paint whatever picture you want with this set!

Feel free to critique, question or add your thoughts on the set. If I have missed anyone on an active roster feel free to drop the name and I will look into it (not making practice squad CAPS until they go to the active roster).

Head over to the forum thread if you want to chat more about this roster, ask questions, or simply say you’re using the rosters and enjoying them. Thanks for sharing these rosters StayODD!

'Is Madden Share Down?' Question Cropping Up Far Too Much as of Late
Madden NFL 21 Patch Fixes Some Gameplay Issues and Animations - Patch Notes