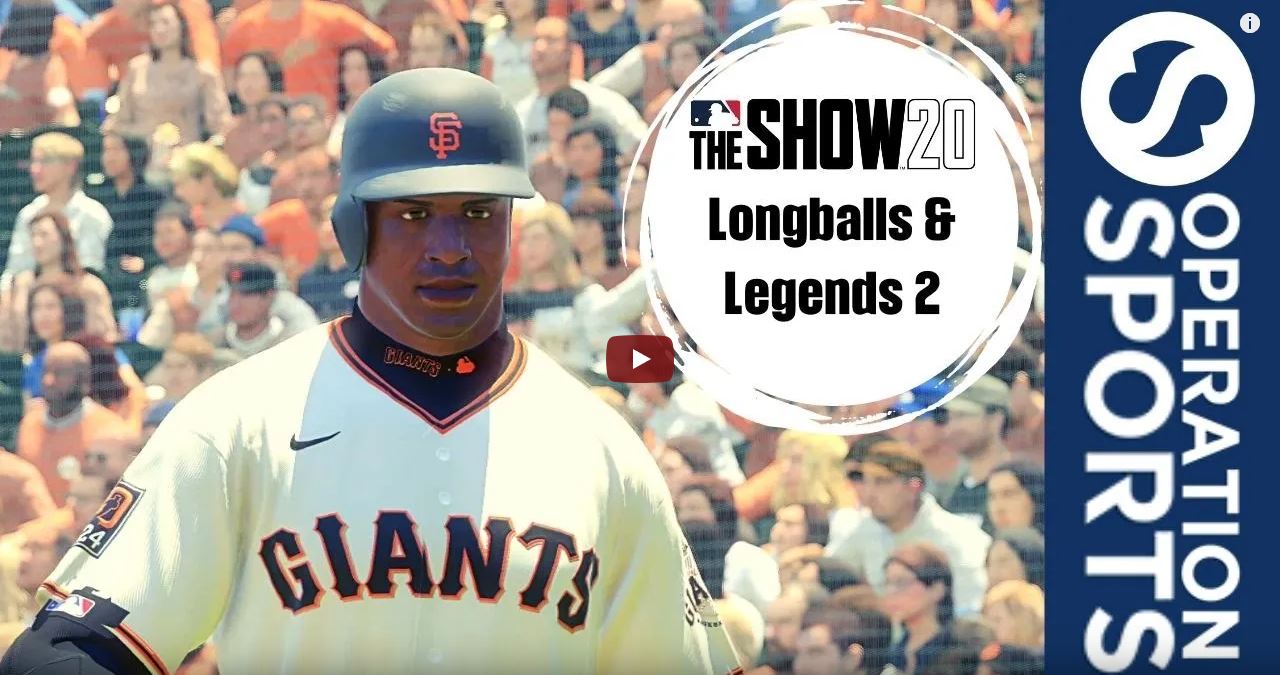 Following up on Version 1 from the April-May window, Longballs and Legends V2 arrived over the holidays for MLB The Show 20. This “fantasy” roster set is based on the ’90s MLB era and comes from the conglomeration of Scout Scoops and the many other CAP creators out there.

Fantasy Full 90 man rosters based on the 1990’s era, players you know from that era in its own fantasy world, sequel to last year’s Longballs and Legends

For a deeper explanation, here is Ridin with the description:

This roster is not based on a specific year or specific teams from a year but based on the 90’s era. So you have players mixed in who maybe started in the late ’80s who are aging vets playing their final years, (Nolan Ryan) mixed in with up and coming young players like Jeter or Garciaparra. You have sluggers looking to hit 61 like Bonds, McGwire and Sosa and pitching prospects from Japan just arriving to MLB. This is full 90 man with full FA lists filled with aging vets, young players, and created fictional players to continue on with your own baseball world built off the 1990’s time period.

This roster is meant as an alternative to a fictional roster, using real players with real attributes and ratings randomized at different ages to bring you a whole unique baseball world where you can play with your heroes of the past.

As always thanks to all the face creators of the OS community, the Full Minors team, DrSublime, Jmeyers, Jethro and all the guys who did the 1993 roster file, which is amazing and this base was built from. Also thanks to @oscarc3f who did a great job on a roster he is putting together and some players were pulled from.

This roster is meant for fun pure and simple, not meant to be historically accurate but detailed enough to play a historical fantasy franchise with and play out with accurate statistics.

In other words, play this as you will. I prefer to do a fantasy draft with these roster sets so everyone gets all jumbled up, but you can go about playing with these custom rosters however you see fit.

How To Find Longballs And Legends V2

There was apparently some limited amount of controversy around the release during Christmas (I was on vacation so I missed the commotion) and I guess this roster was pulled down for a couple days. During that time is when Brian created the video showcasing this roster (apologies for some stutters in the video near the end, that’s on us, not the roster bugging out the game somehow). So in that video he shows off a PSN ID you could get the roster from while Ridin did not have Longballs V2 up. Now, that should no longer be an issue.

That controversy blew over enough that Ridin re-posted the file on the 28th of December, and that’s when I downloaded the roster. I have a general understanding that the issue surrounded someone being unhappy with some CAPs and how certain things were used. While I sympathize with roster creators feeling like their creations are being misrepresented when they’re re-packaged elsewhere, being part of a community creations landscape is accepting you’re part of the ecosystem. It’s one thing if someone just “rips off” your roster file and posts it wholesale under their name to try and get their own downloads (I guess for some weird form of clout), but at the end of the day, we’re all trying to create and share these new experiences with limited tools at our disposal. This will lead to some misunderstandings and the like, but I hope we can try and remember we’re all just trying to play cool new experiences that would not be possible otherwise.

A Note To Motown

Lastly, I also want to send our heartfelt condolences out to the family of Randy Smith, forum handle Motown. He was a longtime member of the community, and he’s responsible for many of the great CAPs that showed up in MLB The Show roster files over the years. He passed away during the holidays, and it’s a huge blow to our community as he’s been posting and interacting with all of us for just about 18 years. It can feel strange at times how to sum up relationships and bonds that are created purely online, but there’s no question these bonds are still real and this loss is as real as any other. I did not personally interact with Motown a ton on the forums (but obviously knew who he was), but I know plenty of folks in the community who had gotten very close to him over the years, and so this hits hard.