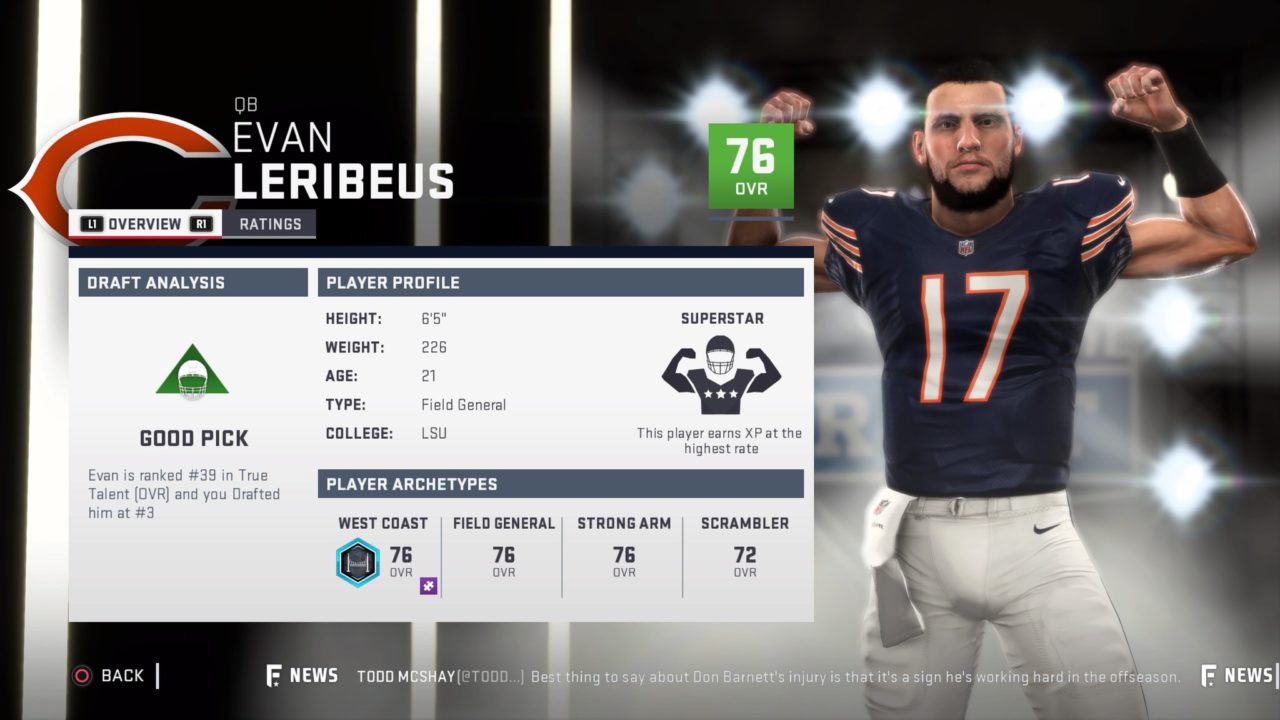 The NFL Draft is the second biggest day in the NFL (behind the Super Bowl). It’s the date when there is renewed hope for your favorite franchise. It’s usually when the future seems brightest and teams hype up their picks with scouting videos, combine stats and even prospect interviews. The prospects even end up in MUT shortly after the draft is completed. Madden, on the other hand, uses the draft as just another day in CFM. Here are some ideas how Madden could showcase the second-biggest day of the NFL season in CFM.

Make It An Event

The NFL Draft has fans coming from all over the country to stand around and wait for their team to pick. The draft is held in a different city each year now as well, which shows some of the landmarks of that city. Multiple analysts are involved and there’s even interviews with the players themselves. Could Madden provide a similar stage? In Madden, we generally see a top view of an empty stage until a player is picked. Once the player is picked, we see some more details regarding that player. It would be a nice little addition if we got audible fan reactions to the pick. Every time a pick is made in the NFL, we see a ton of fans who cheer (even though they’ve probably never heard of the drafted player) or boo in disapproval. I would like to see how my fans react to the pick in the form of a quick chart displaying approval, disapproval and not sure. 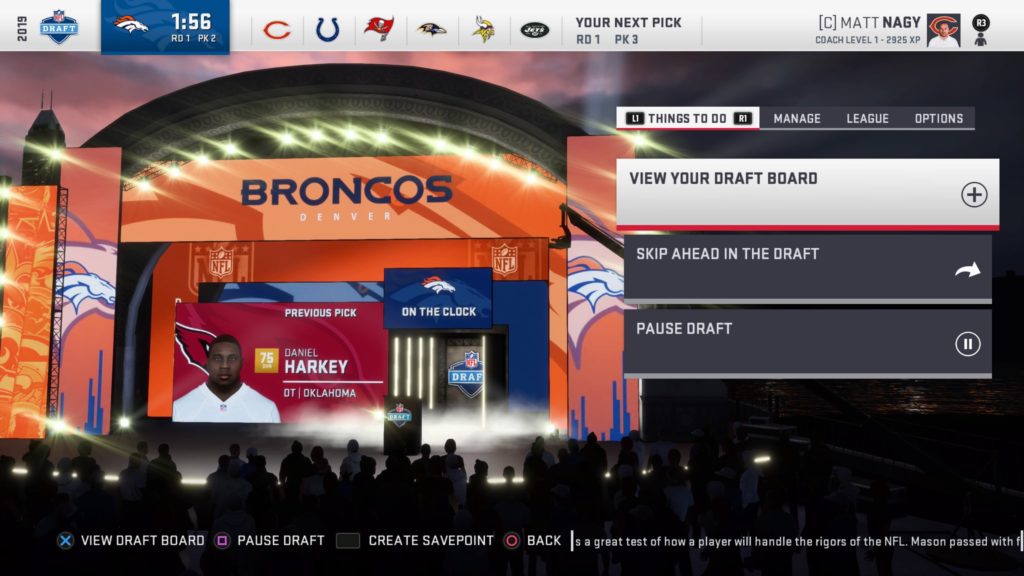 The audio of the draft show is heard with some feedback regarding the pick itself. I think it would be a better experience if we could see the actual draft show that included interviews and pictures. One of the best parts of the draft is seeing the player walking up to the commissioner and displaying his new jersey. What if every team had a “legend” to announce the picks in rounds 2-7? Madden should already have rights to legends from MUT, so it would be a nice little touch to have the legend make the pick.

The draft in Madden also doesn’t have many variable camera shots. They pretty much keep it at the same high angle throughout the whole event. I think it would be amazing if we were able to watch a live show of the draft in the background. It would be great if the analysts talked about team needs, prospects that would be a good fit on the team, player storylines, etc. I think Madden already does some of this after the pick is made, but I feel like the developers could do it a little better in the lead up. Some camera shots I think Madden could provide you during the draft include fans reacting to picks, your draft room, player walking up to stage and getting jersey, analysts talking about the draft, players waiting to be drafted and city landmarks.

If the draft is the second biggest event for the NFL, then the NFL combine might be the third biggest event. The combine is a chance to see these prospects running the 40, doing shuttle drills, running routes, and maybe most important of all, seeing true measurements. Madden does a decent job showcasing the tools of the combine as we get every player’s 40 time, bench press and shuttle drill. These times directly correlate to a player’s attributes. Teams should have a scouting department where their level (or rating) is based off their own previous success in drafting well. Making the combine more a part of the draft will allow GMs to be more invested in their picks. The NFL combine gives us a ton of data on players and Madden should be no different. 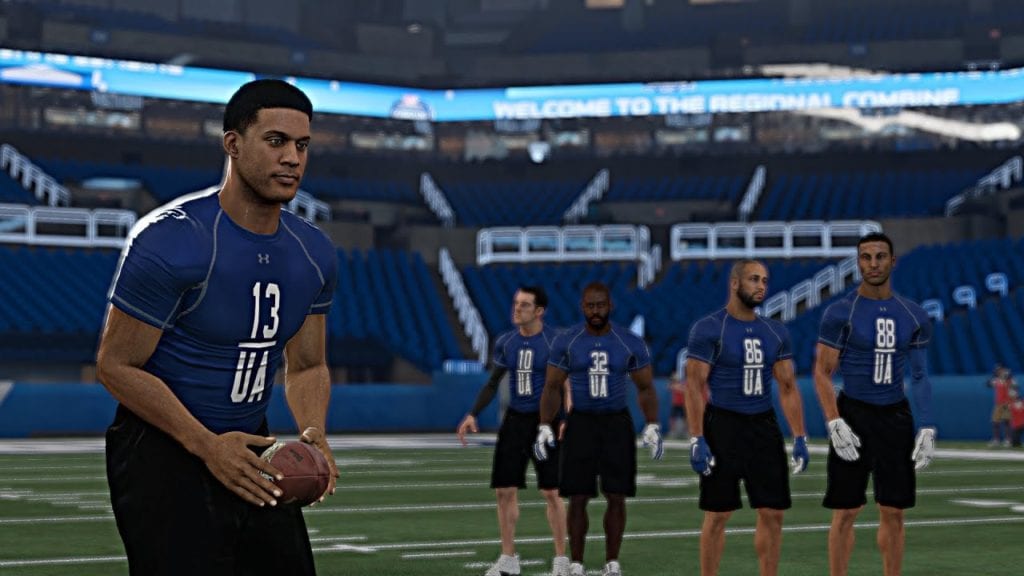 Madden has a lot of room to grow with the combine. It would be more realistic if you could actually see the player before drafting him. Maybe instead of using scouting points, you could actually ask the prospect a couple of pre-generated questions to tie back to his storyline. This would help give the story more of an impact and keep teams involved in the storylines. I also wish you could put these players through some mini-drills/games. Madden has the “gauntlet” available and it would seem like a perfect opportunity to use it. I would love to see how elusive my supposed elusive back actually is before drafting him. I know this may be a reach, but I would love to see video of some of the top storyline prospects doing the drills in the combine. Even if EA can’t generate video, some still images of them would also be better than nothing.

I would also love more detailed scouting reports regarding the prospects. Players should have a best-case, worst-case role on a team. Is a player destined to be a swing offensive lineman or could he eventually be a nine time Pro Bowl LT? Scouting reports should also include verbiage that helps display the positives and negatives of a player. Does a player have slow feet, does he have small hands, does he not rotate his hips quick enough to be successful at the next level? Stuff like this matters to scouts and it should matter to potential virtual GMs. I also wish we could still use scouting points during the draft. Let’s face it, teams are always scouting and getting information on players — even minutes before drafting them.

Draft shows may be boring in real life, but I think they would serve a purpose in the Madden world. Draft preview shows do a good job of speculating how the early parts of the draft will play out. You get a good idea of who the top prospects are, and get a reading on what the teams before and after you are targeting. Mock drafts do a decent job of providing teams with information that can be used to help make a selection. There are no mock drafts in Madden and it’s something that could be used to help hype the draft. Mel Kiper and Todd McShay always have different opinions and predictions, and that would add to the intrigue if you had multiple analysts giving you different potential outlooks. 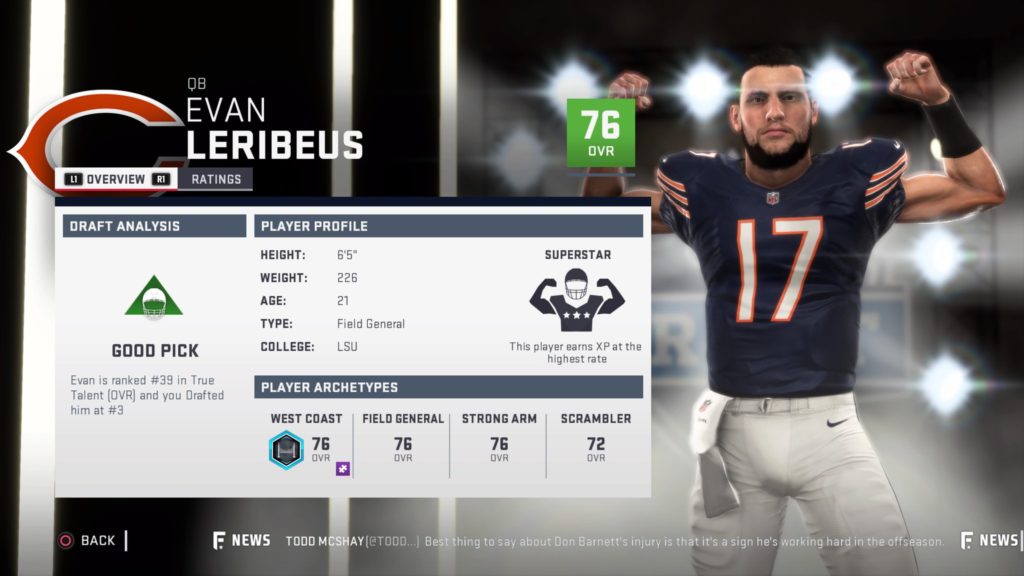 I know the Madden community has asked for a weekly studio show for years and I definitely think one is needed. Madden tried to do a better halftime show during your game, but it didn’t give fans what they really wanted: views from games that aren’t your own. Studio shows should be possible for a game with a big budget like Madden, so let’s start with a draft show. There should be enough pre-loaded content to talk about storylines — and especially with the upcoming scenarios it should be a focus. I would love to hear about things like how a bad combine impacted a player’s stock.

Something like a draft recap show could also be a good way to see who had a good draft and who had a bad draft. Even though it’s not a good idea to grade drafts immediately after the result, we all still do it. I would also love to see previous draft grades and how they panned out. My team got a C grade right after the draft, but it turns out I drafted three Pro Bowl players and now that draft is an A.

There are plenty of ways Madden could improve the draft throughout the CFM game mode. The NFL Draft is a huge event that takes place over three days. Right now, there is not a lot to do during the draft besides hope your targets don’t get selected. It’s time to change that.