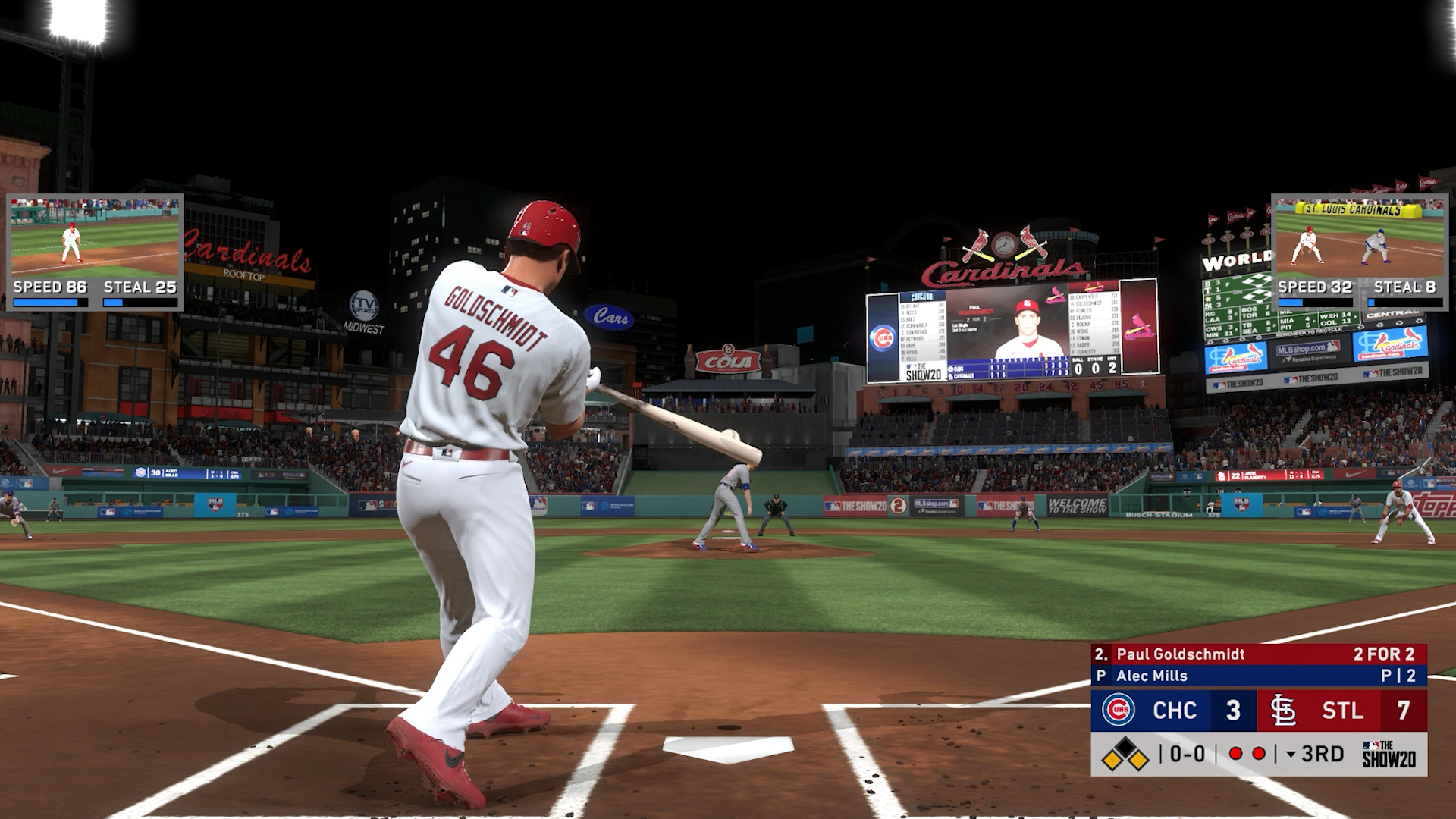 I started the NL Central with the Chicago Cubs and cover athlete Javy Baez, but now we move to the St. Louis Cardinals. The Cardinals are light on celebrations, but they have a decent number of signature home run swings. So with the Cardinals home run swings, we have four to analyze, so let’s get to it.

Analysis: Again, as I have with many of these reviews, I must start by pointing out the leg kick is slightly off. Goldy doesn’t really lift his front foot off the ground when loading to swing, but he has a slight lift in The Show. The only other complaint I have is if we just single out his upper half, Goldschmidt could bend forward even a little more when he’s loading to swing. But the swing itself is great, and the way Goldy pulls up short on his follow through is re-created quite well. Even the way Goldy puts his bat on the ground after the swing is very much like he usually does it in real games.

Analysis: Pure perfection. The setup for Carpenter is great here where he leans back a little before getting set as the pitcher winds up. From there, the leg kick is nailed, and then on the swing itself you see the re-creation of the two-handed follow through where the bat and hands pull in closely around the head and neck area. This is one of the best re-creations I’ve reviewed so far, and that’s impressive because Carpenter has a bit of a quirky setup and swing.

Analysis: With Fowler, basically SDS nailed the celebration (which I did not capture here in this Show clip — or even perfectly in the MLB clip (my bad) — but I promise you it’s in the game) but the swing needs some work. I’m also only looking at Fowler’s left-handed swing because his power mostly comes from that side. Anyway, I believe Fowler has changed his swing a bit in the last year, so this might be part of the issue. He also rediscovered his power last year but still “only” had 19 home runs, so I do get why SDS maybe has something a little generic here for him.

Caveats aside, basically Fowler’s hand positioning is off here. His hands should be a little lower and closer to his chest. The leg kick is solid, but then the follow through should be two-handed not one-handed. The swag coming out of the box is not shot-for-shot accurate either, but Fowler does certainly walk out of the box at the start of his home run trot, and that at least is accurate for The Show. With the celebration, while you can’t see the full swing, Fowler does a sign of the cross and then either hits his chest or left arm area, which The Show does include.

The Cardinals are another one of those teams sort of transitioning to their next era of hitters in some respects. I also left out Yadier Molina since he’s not a major power hitter. Simply put, younger players like Edman, O’Neill and Bader either need to show more power or need more at-bats to get some love by next year. Next up will be the Cincinnati Reds.