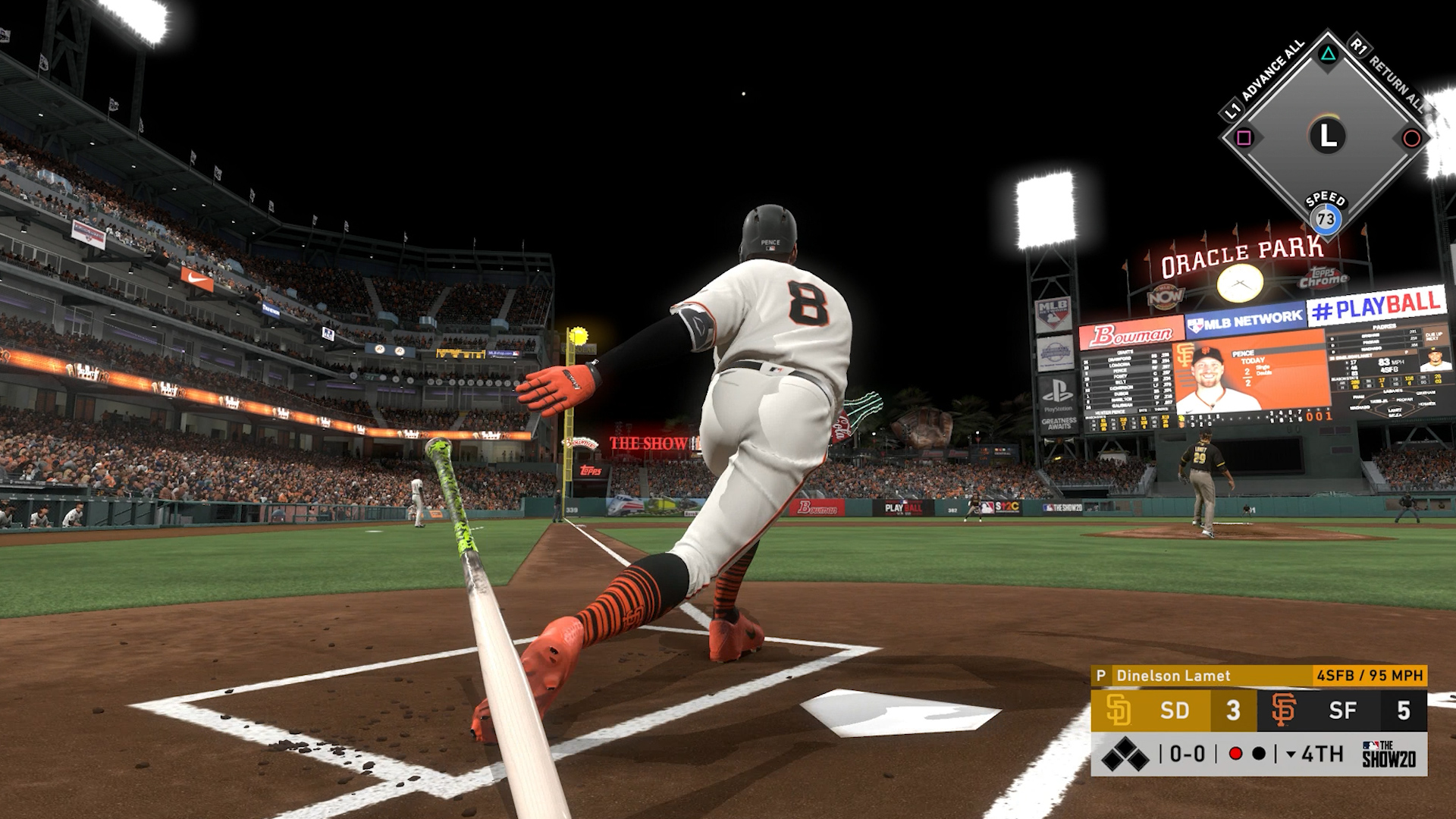 The Diamondbacks had their day in the sun, and now we finish up the National League with the San Francisco Giants. The Giants home run swings are — sorry to say — not that exciting to go through. It’s four veterans, and two of them aren’t even really home run hitters at this point. That being said, I’m not the GM of the Giants, so don’t blame me for the options here.

Analysis: Brandon Crawford has a nearly flawless swing and celebration, which is a little funny only because Crawford is not a big power hitter. That being said, he’s gone through stretches of power, and it’s cool to see a “lesser” player get really good treatment within a video game. The only minor change I would make would be when Crawford is waiting for the pitcher to start his windup his hands should not be activated, which would bring the bat closer to resting on his shoulder.

The celebration is accurate as well as he puts both fists to his mouth before pointing to the sky.

Analysis: Pence is a really hard swing to re-create because he’s just so twitchy and unique, so I grade on a little bit of a curve here. During the setup, Pence should be bouncing on his toe a little more with the left foot, and the leg kick should then fly a little more out in front of his body before he slams it down to take a hack. The swing itself is genuinely good as Pence gets low and hunches over during the follow through, and the only adjustment I would make is that Pence tends to fling the bat away rather than simply drop it on swings where he crushes the ball.

Analysis: Posey has not been a power guy for many years now, but he does have a 99 overall in Diamond Dynasty and is popular in the game if only for that reason. With that in mind, I felt like I should look at him here. That being said, this is a good re-creation as Posey has a relatively simple swing to nail down. He has a slightly open stance, keeps the bat wiggle going until right before the swing, and he has a two-handed follow through that quickly wraps around the back before returning to neutral. I could make the littlest of complaints about how he should come up on his heel a little more on the follow through, but this is very good.

Analysis: Evan Longoria has a very straight up swing with an open stance. He keeps his hands high and just has a basic step to close the stance as he swings. All of that is great and shown in MLB The Show 20. The issue is on the follow through, he goes into a one-handed version where he drops the bat to ground behind him, while Longoria in real life now has a two-handed follow through that is similar to Posey’s where he wraps the bat around his back before returning it to neutral.

There’s really not many other players to even consider on the Giants right now. I had to include veterans who are all on the other side of their home run prime, and the only other candidates were Brandon Belt and Mike Yastrzemski. I would have included Yastrzemski if it looked like he had signature elements, but since he’s a 29-year-old player getting his first shot, I can see why he did not get love as of yet even if he led the team in home runs last year.

So that does it for the National League. Tomorrow I’ll start on the American League with a team from the AL East.