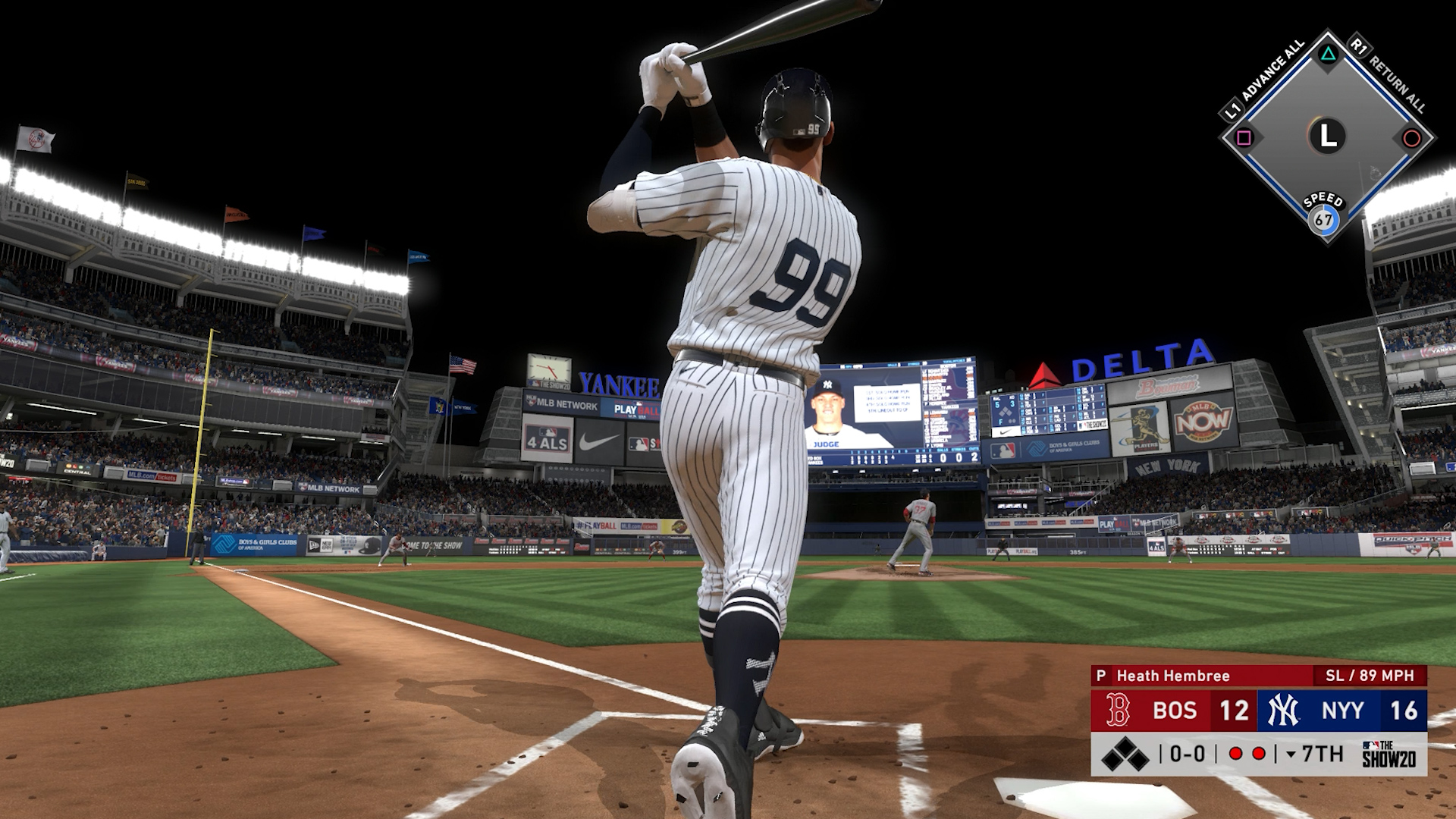 Analysis: Judge is actually a little tricky to review because there is some variety to his swing. He has such good power to center and right that he doesn’t tend to pull as many of his home runs. On top of that, his follow through is sometimes two-handed and sometimes one-handed, which is why I chose two slightly different swings for the grading here. He tends to follow through with two hands more often, so I count this as accurate for The Show, even if the real clip I pulled has him with a one-handed follow through. The tweak I would make though is with the leg kick. The leg kick needs to be a little bigger, and he needs to return the foot back so his stance stays a little more open.

The celebration is good as well. He basically does various little forms of jumping high fives or jumping bicep to bicep touches, forearm touches etc. with his teammates. The big thing is to get the baby jump, and that’s here.

Analysis: Stanton is all over the plate and has a closed stance, so that’s the big part here to get. The leg kick is the portion that needs to be tweaked. Stanton more goes first to his tip toe, and then he does a very small leg kick while still maintaining a mostly closed stance. Here, The Show has him take a more pronounced leg kick and opens himself a little more than usual. Stanton also tends to be a little more compact in his swing and follow through in terms of pulling the arms into his body, while in The Show he has a little more extension than is probably accurate.

Analysis: Torres is basically perfect in the re-creation. He has the wiggle of the bat and he’s up on the toe of his front leg before the pitch is thrown. He then has a big, extended leg kick and then drives through the ball with a two-handed follow through. Perhaps Torres is a little too “on balance” with his swing in The Show, but it’s a little tricky to show how much force Gleyber puts into some of his swings.

The celebration also works as he does a kiss of the hand, points to the sky, and then puts that fist to the other hand. It’s simple, but it’s accurate.

Analysis: Another great re-creation here as Gary Sanchez gets crouched down and then activates the hands to load them during an extended leg kick. The leg kick in The Show could maybe have him landing a little further out, but after that it’s still great. There’s an extended one-handed follow through as Sanchez really pulls the bat behind himself before walking out of the box.

Analysis: The initial stance is the main issue with LeMahieu. He needs a straight on or even slightly closed stance, but in The Show his stance is a little open. From there, virtual LeMahieu crunches up his body too much towards his midsection on the load. Beyond that, the small leg kick is also not quite accurate as D.J. tends to stay a little more straight up even after the very small leg kick. The follow through is mostly on point as D.J. has a truncated two-handed follow through before quickly returning to neutral and heading out of the box.

Analysis: I’m not sure if Gardner has a signature swing, but the generic is very good either way. Gardner does not have much to his swing, so the hand positioning, knee bend and leg kick are all working well here to re-create his swing. Gardner also pulls in that left arm as he goes with the one-handed follow through, which is the best part of the mimicked swing. Virtual Gardner has a little more swag to his bat flip, which is maybe not on-brand for Gardner, but it’s a small thing.

Analysis: The Show actually got the hard part right as there’s an extended leg kick here for Voit as he delays landing the foot until he’s just about to swing. The issue is he needs to plant the foot more closely to where his stance started rather than closing down. On top of that, Voit has a two-handed follow through in real life but a one-handed one in the game. Lastly, Voit could use a little more swag getting out of the box.

The Yankees got a lot of love, and it makes sense since they hit a ton of home runs and are the Yankees. Finishing up the AL East will be the Blue Jays. They’re going to be a tough team to grade because so much of the talent is either young or not quite hitting as many home runs as expected as of yet.