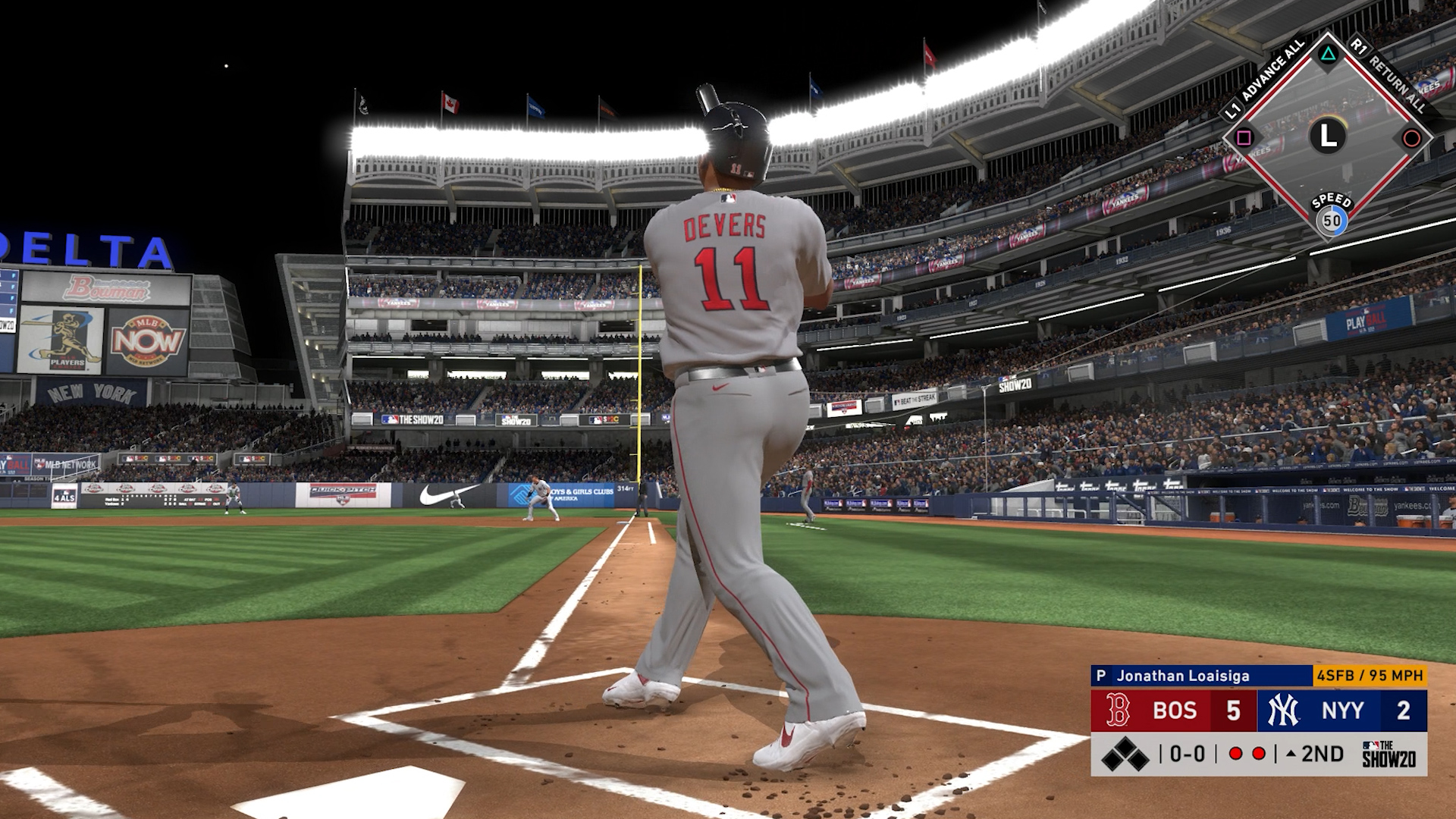 The Baltimore Orioles did not have many players to cover, but the Boston Red Sox have quite a few more to look at right now. In fact, I have seven Red Sox home run swings I’m going to review below. Not all seven meet the general criteria I’ve been using (minimum of 20 home runs or a signature celebration) but I felt the need to go a little deeper because they’re a marquee franchise. Let’s do it.

Analysis: J.D. has a good re-creation here with just minimal changes that would need to be made. He needs a slightly smaller leg kick, and on the swing itself his follow through has too much extension. The good touch here is Martinez is quick to get out of the box and really doesn’t spend much time looking at his home run.

The celebration is the best part of the re-creation though as it’s perfectly mirrored here. he starts with a kiss of his hand, then taps his chest twice before ending with a clap of the hands. The clap of the hands is more pronounced in The Show, but that’s fine as there’s some variety to it in real life as well.

Analysis: Like Martinez, Devers needs just the smallest of tweaks. His front foot could be slightly altered so his heel is not flat to the ground as he gets set at the plate. After that, the leg kick is the only other tweak. As he picks up his foot to load, he does not really bring it in line with his back foot on the swing, instead he still remains a little open and returns the foot back closer to where it started. The follow through is really good though as he really torques the bat behind his back with a two-handed follow through.

Analysis: Benintendi had a little bit of a power outage last year, but I still felt the need to include him because he’s still young and has hit 20 home runs before. He has a bit of a generic swing here, but the pieces aren’t terrible. The hand positioning and bat wiggle are accurate enough, so the main issue is Benintendi needs an actual open stance. He also needs a larger leg kick, and he needs to pull up short on his follow through rather than extending the bat all the way behind his back.

Analysis: Chavis also didn’t get to 20 home runs, but he did not get a full season of at-bats, and also the ball just sounds different sometimes when he hits homers. (Seriously, listen to that home run he hits in the MLB clip, it’s such a good sound.) Chavis has another generic swing, but the one that’s used for Trea Turner in The Show would actually be close to correct here, at least for the follow through. The issues are he needs to be bouncing up on his toe with his front foot before the pitch. The leg kicks are about accurate, so then the follow through just needs to be tweaked so he drops the bat almost right after the swing. To put it another way, Chavis does have some swag to his swing in The Show, he just doesn’t have the “accurate” swag.

Analysis: Bogaerts has another solid all-around re-creation here. The main issue is his stance starts a little too open in The Show. Beyond that, I would say this is just about perfect. The follow through has him pulling in his right arm as the bat flies behind his body in the left hand. He then walks his way out of the box before starting his jog around the bases.

The celebration is also nailed as Bogaerts does the sign of the cross, claps his hands, then kisses the hand and points out to the crowd.

Analysis: Vazquez got a generic swing, which isn’t shocking, but there are better generic options to go with than the one he got. His stance needs to be more straight up, and his leg kick is not large, rather it’s almost delayed where he first gets up on to his toe, then does a very small leg kick. On top of that, Vazquez has a shortened two-handed follow through, not a one-handed follow through like in The Show.

Analysis: I don’t believe JBJ has a unique swing, but his is closer to accurate than Vazquez. Jackie Bradley Jr. needs an ever so slightly more open stance, but the leg kick is accurate. The follow through on the home run has a portion correct as he does quickly return to neutral, but JBJ needs to wrap the bat around his back first before he brings that bat back to neutral.

I think I included every single viable player currently on the Red Sox, so there’s not much coverage I feel I missed. Tomorrow I’ll be reviewing the New York Yankees, and then I’ll finish up the AL East over the weekend with the Toronto Blue Jays.