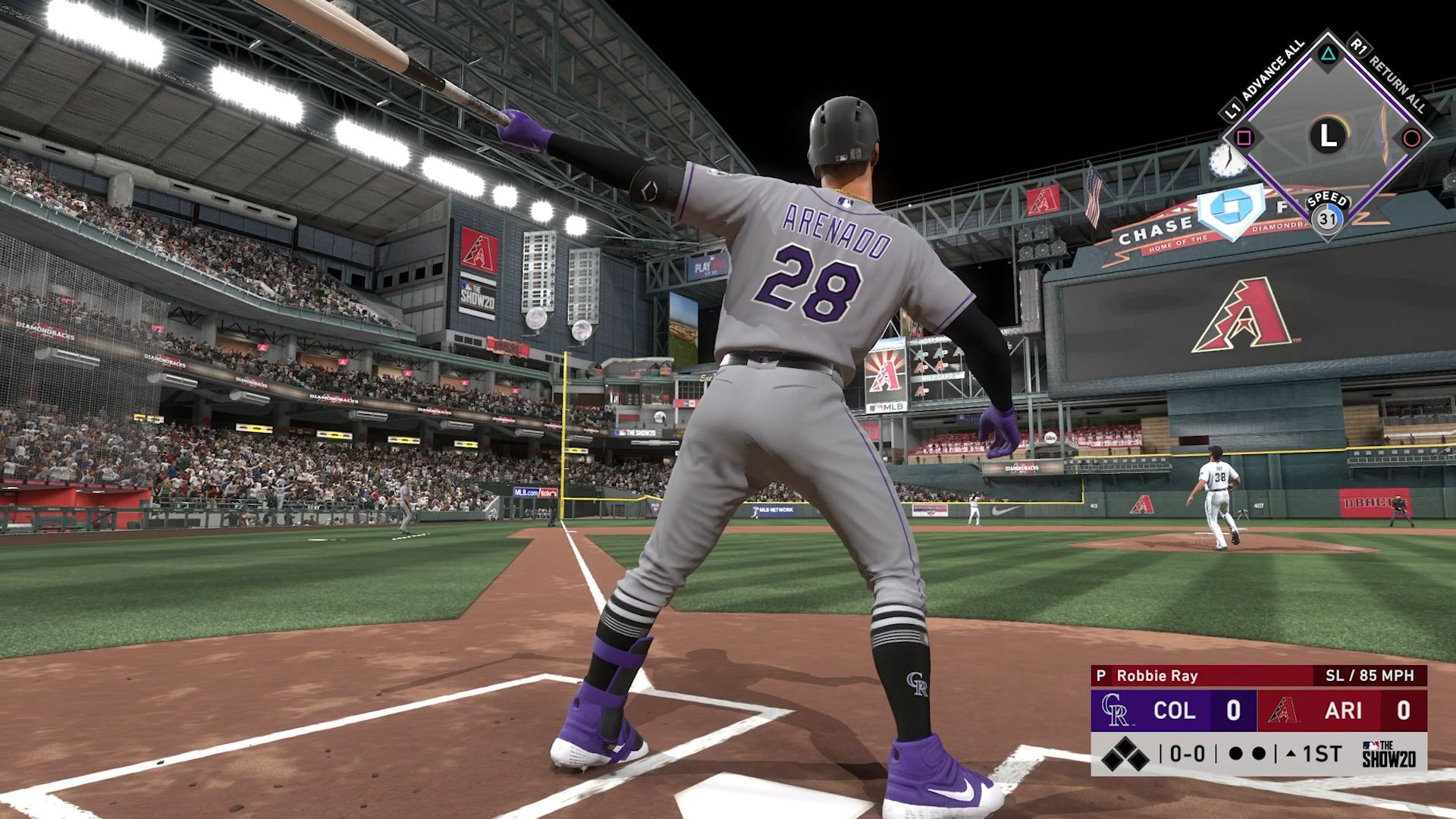 We started off the NL West with the Los Angeles Dodgers, and now we move to the Colorado Rockies. There are four Colorado Rockies home run swings I’ll be reviewing, and there’s two celebrations mixed in as well. Let’s do it.

Analysis: One small change should be made to Arenado’s swing, but overall this is a good re-creation. His hand placement needs to come down just slightly, and then that’s about it. The tricky thing with Arenado is his leg kick is almost twitchy in that he double taps the foot but also barely lifts it, and that’s actually really well done here to me. The swing itself is good with the extended one-handed follow through before starting to run around the bases.

The celebrations are barely different between real life and video game, and the core concept is right either way. In The Show it looks like he puts a fist to his chest before pointing to the sky, while in real life he generally more slaps his chest and then points to the sky. Regardless, I don’t see any reason to really take credit away for the marginal difference.

Analysis: Blackmon has a really smooth and simple swing, and it’s accurate in The Show up until the follow through where just a small change needs to be made. On the follow through itself, the two-handed approach is accurate, but it’s with his feet where the alteration needs to be made. Blackmon almost bounces out of his follow through as he goes up on the heel of his front foot and then lifts it to go into his jog rather quickly on most home runs — even the no-doubt ones. It’s subtle in a way, but important because it really adds to how Blackmon gets out of the box.

Analysis: The bat being on Story’s back during the swing setup is a great touch that The Show nails. The issues with the swing mostly come from the lower half until the follow through. The leg kick is extended, but his foot should stay more flat and parallel to the ground. Then on the step itself he should really torque that front leg so it’s straight and then he comes up onto the side of his foot on the follow through. (Side note, I worry about Story’s left knee a bit with this swing.) The leg kick syncing up with when he swings is mostly is fine, but then the follow through should be one-handed (somewhat like Justin Turner’s) as he pulls the right arm across his body.

The celebration is almost correct, but Story tends to point to the sky with two hands rather than one after touching his chest and bringing his hands near his face.

Analysis: Murphy is not a huge home run hitter, but he’s had spurts of power and is a relatively popular player within Diamond Dynasty, so I felt he should be looked at. His swing is also rather simple, so the changes here would not need to be massive. Basically, you just got to get Murphy to bend his legs more and stick that butt out just a pinch. On the swing itself, the leg kick is accurate enough, and then Murphy just needs to wrap the bat around his back more on the two-handed follow through to be on point.

Ian Desmond, Ryan McMahon and David Dahl all had an argument to make this list. With 25 home runs last year, McMahon might have the best case of someone left off so far, and Dahl has an argument since he looks like he will be the best player and should be able to hit 20-plus home runs in a season at least a couple times at this juncture. I left them off just because it didn’t seem like their swings were very customized, and none had celebrations to look at either.

Next up will be the Arizona Diamondbacks, thanks as always for reading and watching.