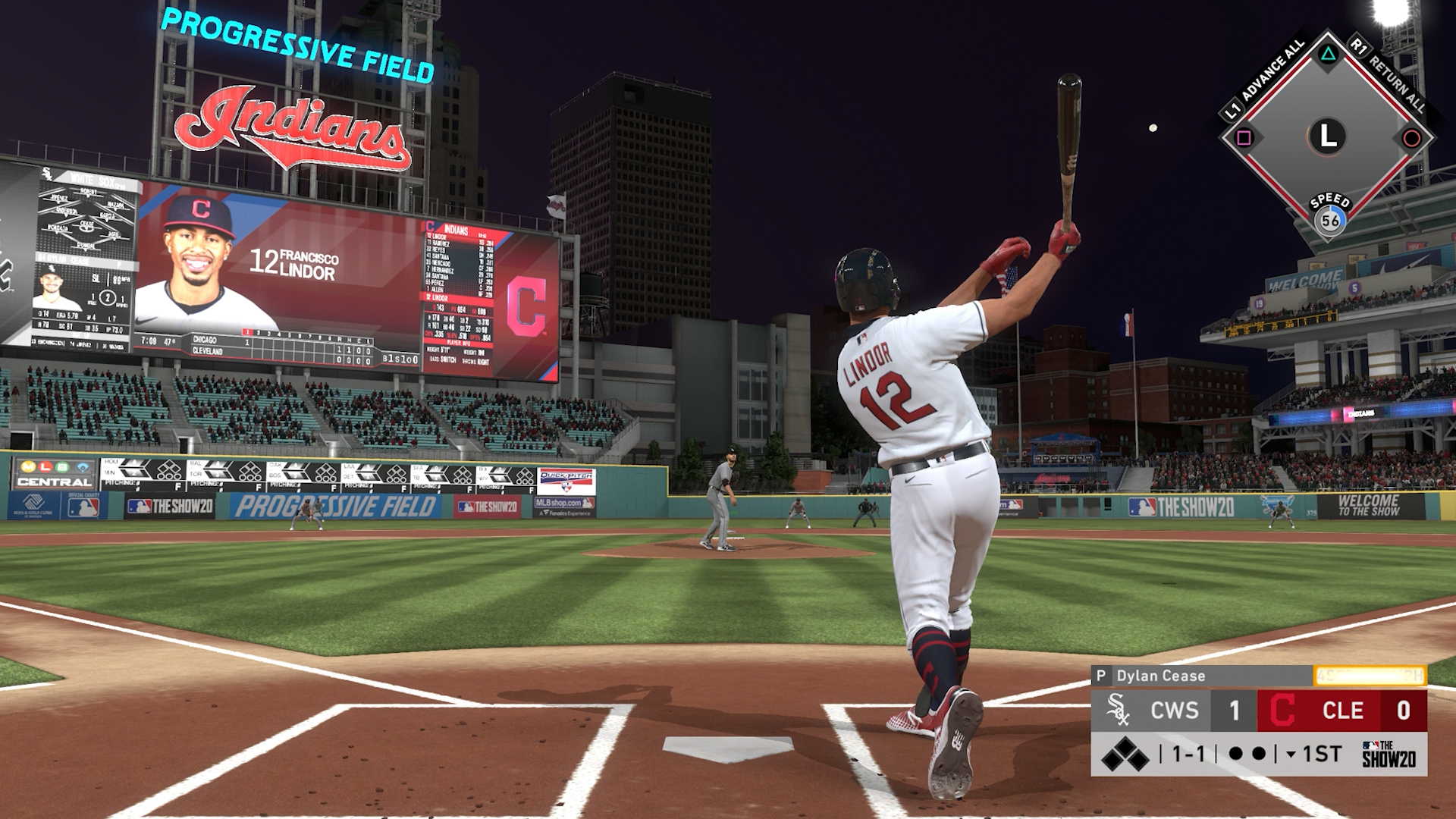 The White Sox were one of the more enjoyable set of reviews to do so far because they were, well, good. The Cleveland Indians home run swings are not as difficult to get through because there are only four players to cover, but three of them are switch hitters. Let’s jump into it.

Analysis: I’ll discuss the celebration in the next review of Lindor, but the swing here is picture perfect up until the follow through. From the left side, Lindor tends to have a two-handed follow through while in The Show it’s one. He falls over the plate a little more than usual on this swing in the MLB clip, but The Show having him tilt just slightly towards the plate is more accurate than not.

Analysis: Lindor’s stance is a little more closed from the right side, and he’s a little more upright. Otherwise, using the mirror from the left side doesn’t really stand out as wrong here. His two-handed follow through is more obvious here so The Show misses out on that once again.

The celebration is accurate with the three slow pounds of the chest and then the kiss of the hands at home plate.

Analysis: Jose Ramirez just has a couple of small issues that add up to hurt the grade. When he’s loading for the swing, his bat should activate a bit more to straighten out above his head, and then his follow through needs to come around his back more rather than having the hands pull in to stop his follow through short. In addition, the leg kick should leave his stance more open rather than closing him down a bit.

Analysis: Some similar issues here as the other Ramirez review as the leg kick should keep him more open rather than closing him down. They give Ramirez a generic follow through here, which is better in that it’s one-handed so that’s accurate. However, Ramirez tends to spin open on the follow through rather than have this perfect one-handed follow through on balance like he has in The Show. In addition, his hands need to be more active on the load here from the right side.

The celebration is correct with the touch of the chest, then going to the mouth and then slapping down on the one hand.

Analysis: Santana has a good swing here, I would maybe just lean him back a bit more on the follow through as he comes up on his front heel. Before that, his leg kick could stand to be even a bit more excessive as he really loads up before planting his foot.

Analysis: Not really much of anything to draw attention to here for Santana from the right side. The follow through is slightly altered and that works here, and otherwise he just needs maybe a little more height on the leg kick once again.

Analysis: Reyes has a very involved celebration so that’s the bigger thing to focus on than his swing. The swing is just about perfect as well, with maybe the only slight complaint being he should release the bat a split second sooner on the follow through. However, he side steps out of the box, which is great, and it’s more good stuff from there. He shows off the bazooka muscle arm coming around third, and then does the sign of the cross before pointing to the sky at home plate.

With the AL Central wrapped up, the AL West is all that’s left to cover. I will start tomorrow with the Seattle Mariners, which should be a tidy set of player reviews.

Comment on this article
Continue Reading
You may also like...
Related Topics:cleveland indians, MLB The Show 20, signature home run swings