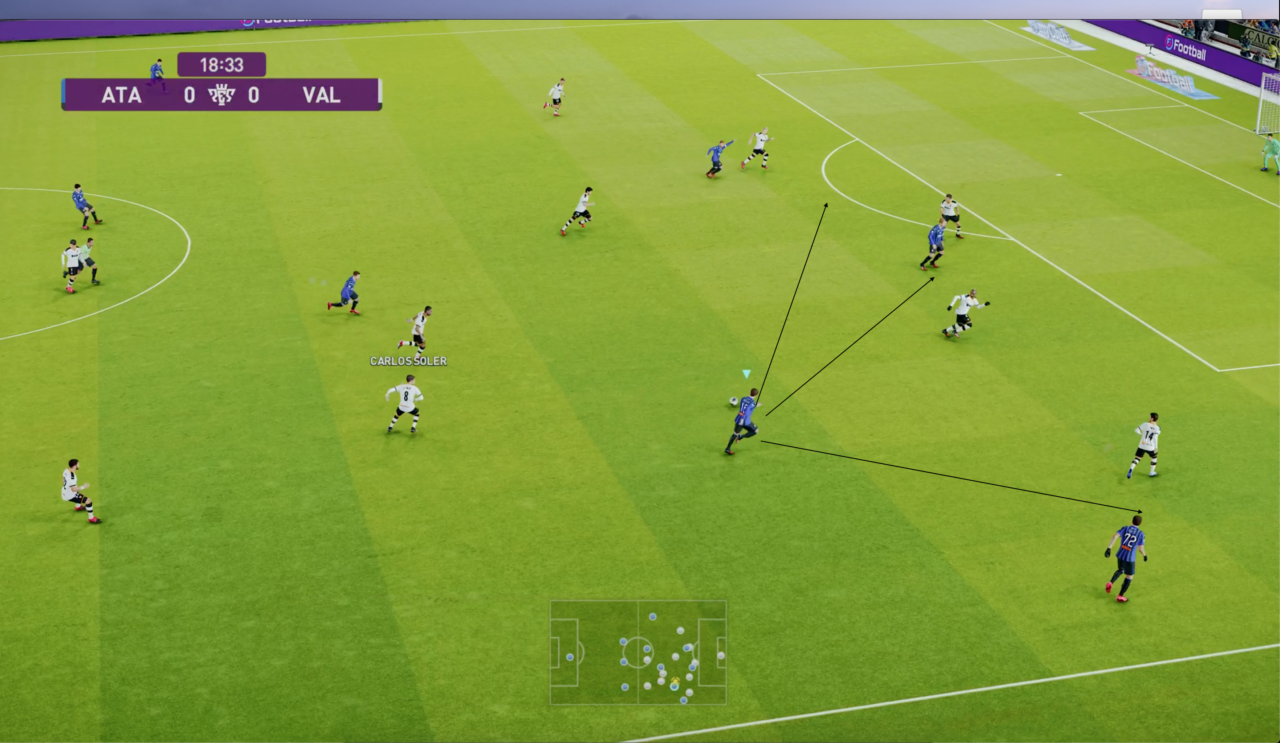 While many of us were busy with Valentine’s Day activities, Konami continued its post-release support of eFootball PES 2020 by releasing Data Pack 4.0. While the good majority of updates were cosmetic items such as new kits, boots and faces, there were a few gameplay updates sprinkled in too. As always, this infamous Konami note was in the patch notes:

“A variety of minor adjustments have been made to each mode to improve the overall gaming experience.”

This late in the release cycle I don’t expect to get major gameplay updates, but there’s still room to improve PES 2020 before next year’s iteration. So the question is, does PES 2020 play better after Data Pack 4.0?

The answer is a resounding yes.

As soon as the ref blew the kickoff whistle, I felt an immediate change in the game’s pace of play. It was more in line with the widely popular demo. At first I thought the speed difference was a result of playing a lot of FIFA Pro Clubs as of late, but as the matches accumulated, I felt a noticeable difference in the pace of play.

The game feels slowed down to a more realistic pace. Due to that change, there seems to be less open space, which is a PES legacy issue. Certain areas on the pitch, like the midfield, have felt more congested resulting in less time on the ball. This means the breakneck end-to-end action, a trademark of PES, has been reduced and only really surfaces when the game becomes stretched.

In tune with a more realistic pace of play, the AI attacking is much more varied and patient:

Above, Liverpool (AI-controlled) wins the ball back after a deflected pass. As is often the case in real life, their midfielders then look to switch the play to the opposite fullback, stretching the opposition defense out wide. After a bit of quick 1-2 passing by Andy Robertson and Georginio Wijnaldum, the cross is inevitably blocked. Still, there is some nice patience exhibited by the AI in its build-up. Instead of consistently bombing down the flanks, the AI goes from attacking centrally to wide in a matter of seconds.

Again, here is another example of some patient AI play. After I (controlling Atalanta) cleared the ensuing corner kick, the AI-controlled Valencia collects the clearance. From there, instead of attempting a volley, something that occurred 100 percent of the time in this scenario in the past, the AI collects the ball, probes the defense — first via the dribble — and recognizes that I have nine defenders behind the ball: 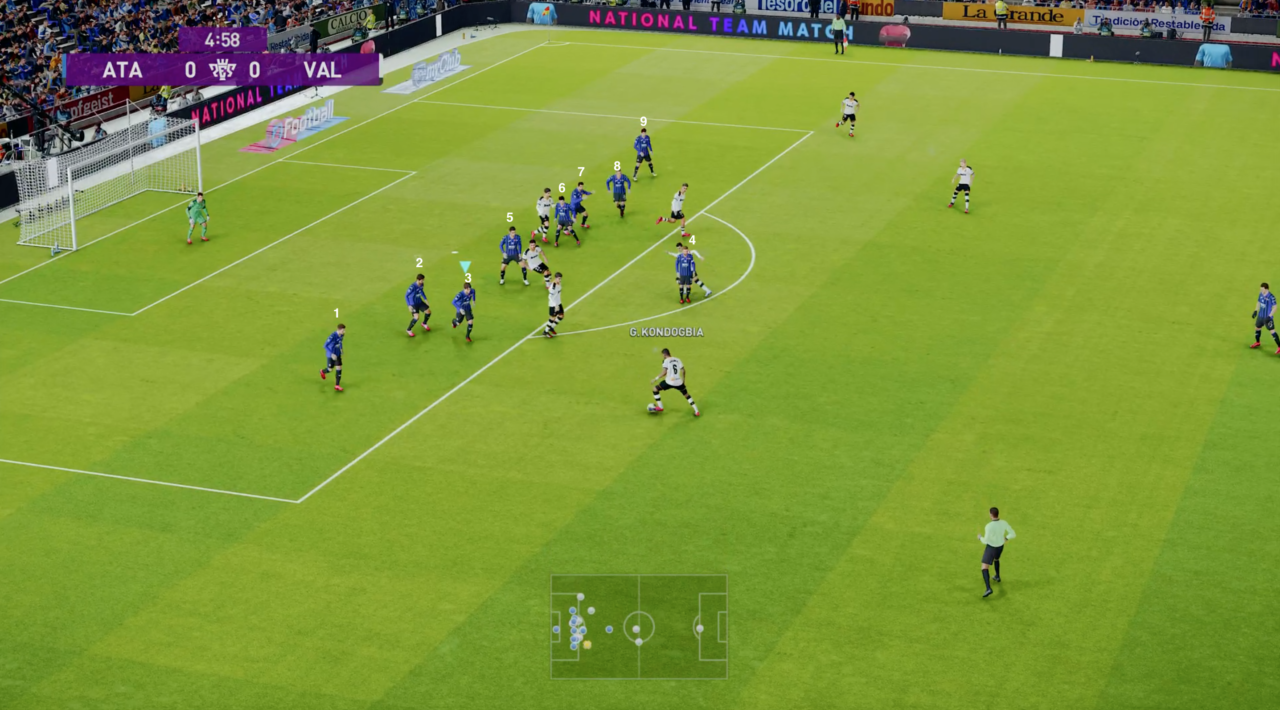 Instead of forcing the issue, either with a crossed ball into the box or an attempt at a through ball, the AI pays the ball until the attack finally fizzles out when a player is dispossessed. Little passages of play like this don’t seem like a lot and often go unnoticed, but it’s the little things that lead to better and more organic gameplay.

Another noticeable improvement is AI awareness, specifically focusing more attention on the relationship between positional awareness and action. In the next clip, I attempt to play the ball out of the back, perhaps a bit too confidently considering the update to manual passing in this update:

Here’s a CB attempting to play a pass with his weak foot on the ground in the middle of the park to a center attacking midfielder retreating deep to collect it. Valencia, not pressing particularly high and still trying to regain defensive shape, recognize the lackadaisical pass and pounce on it.

Pre-patch, the Valencia player who intercepted the pass would have stayed glued to his position, not recognizing the pass. Post-patch, he picks up the ball and is immediately in on goal. The attack fizzles out, as most attacks do, due to an over-hit pass (another minor tweak — more realistic AI passing error).

Perhaps my favorite example of the increased AI awareness is exhibited here:

Again, it’s me controlling Atalanta (in blue/black stripes) and on the attack utilizing the width and flexibility of their 3-4-1-2 system. As the Atalanta attacker holds off the Valencia defender and plays a pass around Valencia’s Geoffrey Kondogbia (#6 in white), we’re bearing down on goal with three passing options for Atalanta’s Marten de Roon:

As I take the least risky passing option, the pass to the feet of Papu Gomez, our right midfielder #33 Hans Hateboer continues his intelligent run: 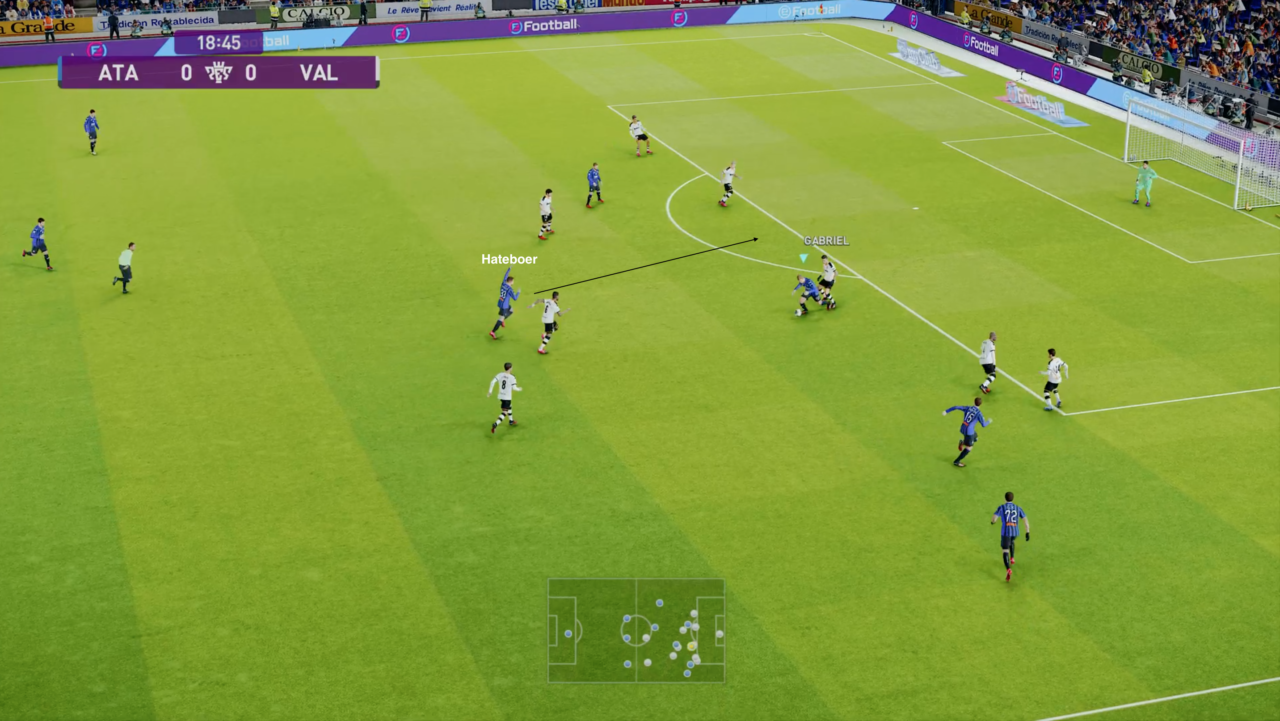 As I hold the play up with Papu Gomez in an attempt to give Hateboer enough time to make the run, Valencia’s Geoffrey Kondogbia tracks Hateboer’s run, getting his body in-between the ball and runner, allowing him to intercept the ball and clear the danger.

The increase in AI awareness is not limited to just the AI. Attacking intelligence among your players, particularly on the counter, is better. This allows you to punish teams before they have a chance to regain their defensive shape.

Here you’ll see Atalanta capitalize on Valencia’s Ferran Torres (#20 in white) taking too much time on the ball before being dispossessed. This leads to an Atalanta counter and ultimately a Duvan Zapata goal:

Once dispossessed, Atalanta breaks forward with five attackers and one advanced striker coming back to link the attack: 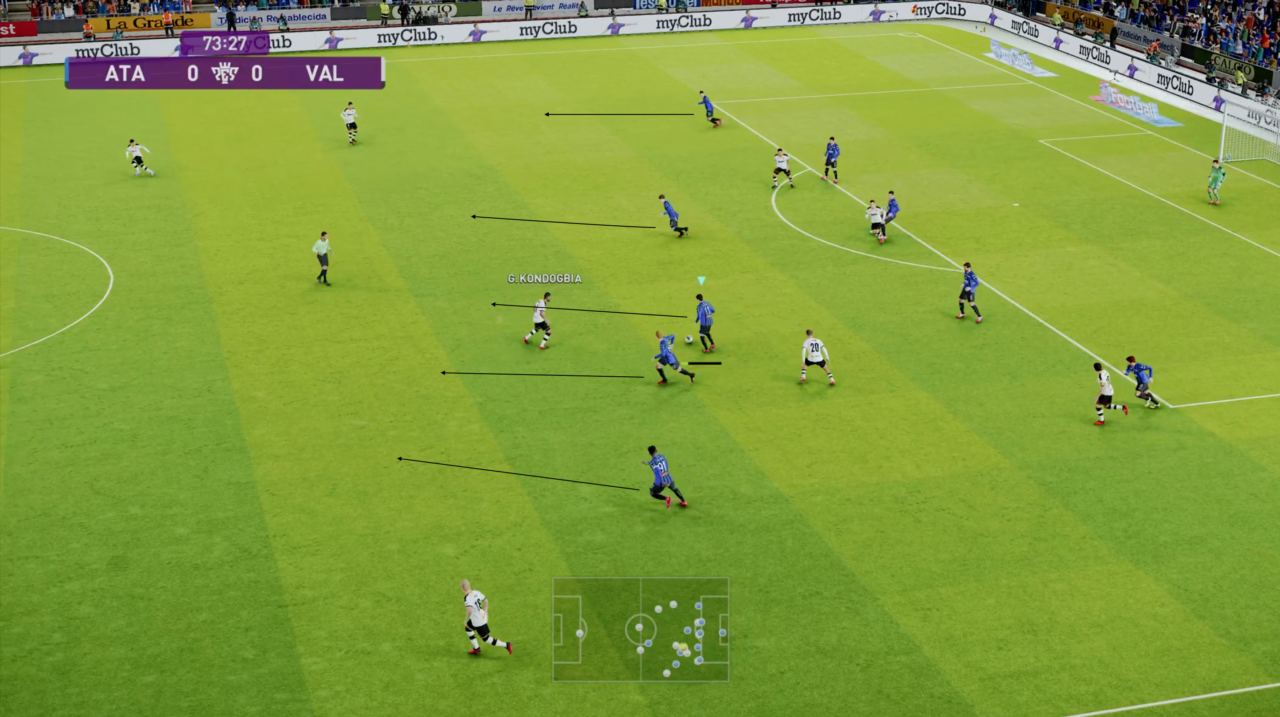 After linking up with the most advanced attacker, Atalanta’s Ilicic allows the advancing attackers to sprint onto the ball. It’s eventually sent out wide before being sent in low and fast, finding Zapata who cuts in front of Valencia’s Gabriel for the tap-in goal:

Zapata, just as he would be instructed to do in real life, does a great job of stepping in front of the defender, thus getting goal-side for a simple tap-in.

Data Pack 4.0 isn’t perfect and doesn’t address some of the issues that plague eFootball PES 2020, such as inconsistent refs. However, it’s made the game as good as it’s been since the demo. Good on Konami for showing a willingness to make changes that go beyond basic cosmetics this late in the cycle.