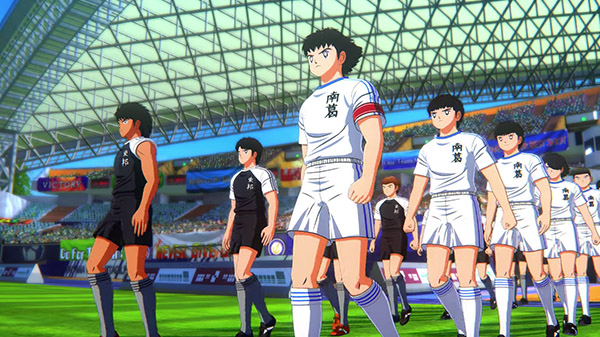 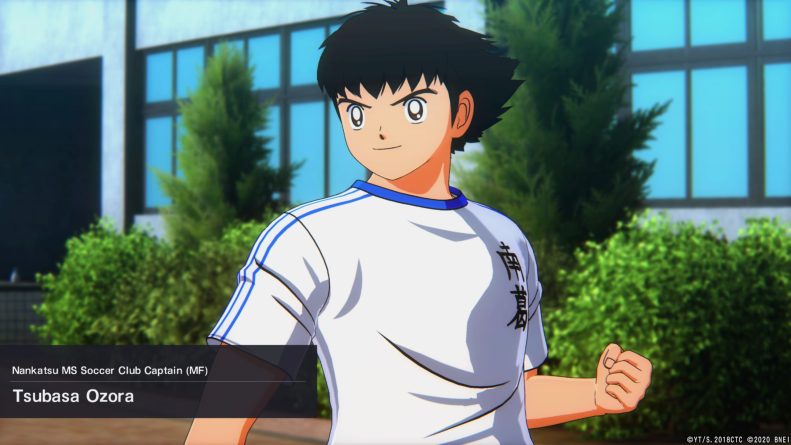 Originally created in 1981 by Yoichi Takahashi, Captain Tsubasa chronicles the story of a young Japanese student who dreams of winning the World Cup for Japan. From an early age, young Tsubasa has an affinity for soccer. In fact, it’s rumored to have saved his life. After he nearly succumbs to a horrific accident, he’s saved by a soccer ball.

After moving to a new town renowned for its development of soccer players, young Tsubasa befriends a few soccer loving youths named Ryo Ishizaki, Taro Misaki and Genzo Wakabayashi — as well as Brazilian legend Roberto Hongo who becomes a sort of mentor for young Tsubasa. After honing his skills in the years ahead, Tsubasa joins his high school team who’s coached by his mentor Roberto. Along with a host of other talented youngsters, Tsubasa wins various youth international tournaments for Japan before leaving to play professionally overseas.

After moving to Spain where he plays for FC Barcelona’s “B” side, Tsubasa is called up to the first team and the rest is history. Instead of picking up here, Rise of New Champions is an epilogue that allows you to either create a new character or relive Tsubasa’s original storyline, picking up after his middle school tournament.

Captain Tsubasa: Rise of New Champions Review – What I Like 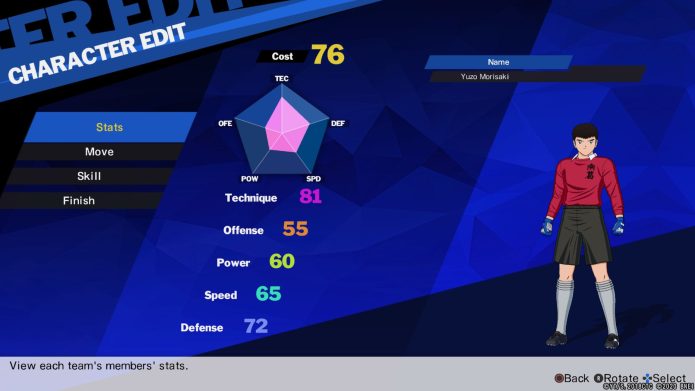 I am huge fan of career modes in sports games. Whether it’s Road to the Show or Become a Legend, career modes grab me. With this being the core mode behind Captain Tsubasa: Rise of New Champions, I was immediately all-in here.

The game starts off on the right foot, with a brief history lesson on Tsubasa followed up by a few quick tutorials explaining the game’s basic mechanics. With a controls layout similar to Konami’s Pro Evolution Soccer, I instantly felt at home with the controls. Learning a new controller layout is one of the hardest things to do when playing a new title and not having to “fight the game” for this one made for a smooth transition into the world of anime through the beautiful game.

Back to the modes for a second — and there are a few of them — with the two most popular being located inside of the “The Journey” title: Episode Tsubasa and Episode New Hero. Episode Tsubasa relives the journey of our central character’s rise to prominence, starting in middle school as you’re quickly introduced to your teammates, aka the “supporting cast” of the story.

Be sure to check here for a background on Tsubasa’s teammates. This is the mode that I spent the most time with as it helped catch me up on the story while also getting to enjoy the host of characters in the game. Despite being focused primarily on Tsubasa, you still have the ability to control your team, meaning you can change the formation, edit tactics and make player switches pregame in the “Manage Team” menu option.

Similar to the controls layout, long-time PES players will recognize the pentagonal-shaped ability barometer while the rest of the menus are quick and easy to navigate. Once you get deeper into the mode, and full disclosure here I haven’t completed the mode in it’s entirety, you’ll get wrapped up into the story just as much as the actual footy gameplay. The story flows very well with Tsubasa’s team so accustomed to winning that when new challengers arise it causes Tsubasa to go into “overkill” as one of his teammates so aptly describes him.

One of the cooler features in this game is the auto-generated memories, basically a video you can access at any time through the “Movie” link that sort of serves as a storyboard piecing together everything as you progress through the game. Without spoiling anything further, I will say that I enjoy the story just as much as I enjoy the gameplay. The characters have personalities, there are villains, and ups/downs along the way. My journey isn’t complete but I’m looking forward to seeing how this plays out.

Apart from the two main story modes, there are a host of other modes here. Two of note are Practice and Ultimate Edit, two modes that are main components of the FIFA and PES franchises. Tsubasa doesn’t have official licenses so Edit mode is particularly useful as you can update names, change tactics and a host of other options. There’s also an online component involved that let’s you take your talents online to compete against other online gamers.

There’s enough modes in this rendition of Captain Tsubasa to keep you entertained for quite some time. All of the modes are well thought out, and while the backstory is briefly mentioned during your journey, a quick Google search can fill in the blanks of what happened before Tsubasa got to middle school. The rest is up to you. 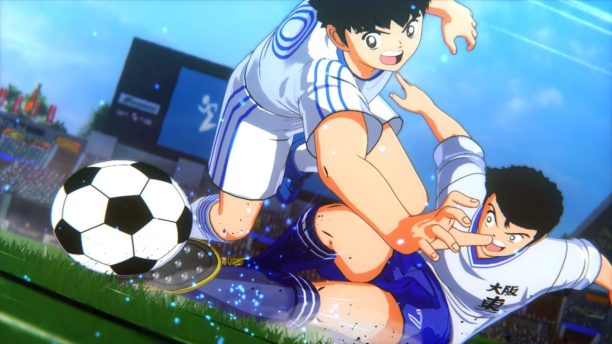 Look, I’m no anime or manga expert but I thought the game’s visuals were sublime. Whether it’s in cutscenes or in motion, the graphics look good with eye-popping colors and fairly detailed backgrounds, including a host of unique stadiums.

Speaking of cutscenes — and there’s a lot of them — they look and animate like anime I’ve stumbled across in my travels. The characters/players are detailed enough that I could recognize the differences between them, and special moves (shots, saves, etc.) bring out cool special effects depending on the move you select. Whether it’s in motion or at a standstill, the visuals in Captain Tsubasa are impressive. 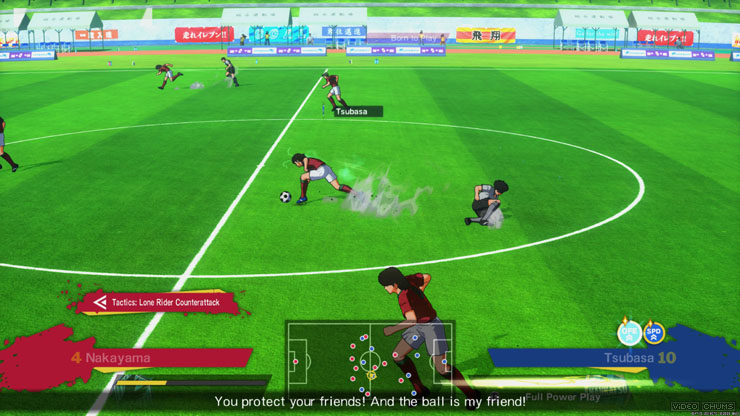 Captain Tsubasa Rise of New Champions was never intended to be a soccer simulation, so if that’s what you’re looking for you’re in the wrong place. Instead, the focus is on delivering fast, over-the-top footy action mixed in with anime/manga cutaways.

Make no mistake though, the core elements of a soccer game are still involved as basic controls like passing, shooting, crossing, and tackling are in the game. There’s even a radar that you can use, which I found extremely helpful considering the sheer scale and magnitude of the pitch. Be warned, it’s large but I have the feeling that it was a design choice because, after all, these are kids playing.

Lastly on the gameplay front, input response — something that plagues both FIFA and PES — is pretty good in Captain Tsubasa: Rise of New Champions as I was able to pull of one-touch passes and shots with ease.

Captain Tsubasa: Rise of New Champions Review – What I Don’t Like 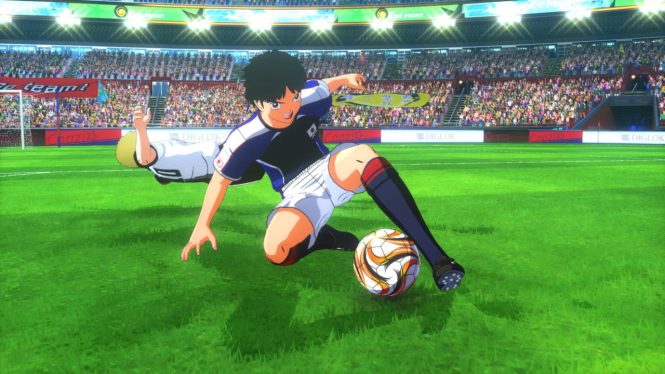 The overall pace of the game isn’t for everyone, and while I personally don’t mind reading subtitles, there’s probably a large portion of players who will be turned off by them. Captain Tsubasa: Rise of Champions is just as much an anime/manga story as it is a footy title, and if you’re not into anime you might not get enough soccer to satisfy your footy urges.

The cutscenes, especially off-the-pitch, can be long. While they do a great job of furthering the plot by developing the characters, there are times when even I found myself skipping through a few, namely when every one of Tsubaba’s teammates feel the need to chime in on how pumped they are for the next match. Load times can get a little long too, but perhaps that’s a symptom of the PS4’s maxed-out processing speeds. 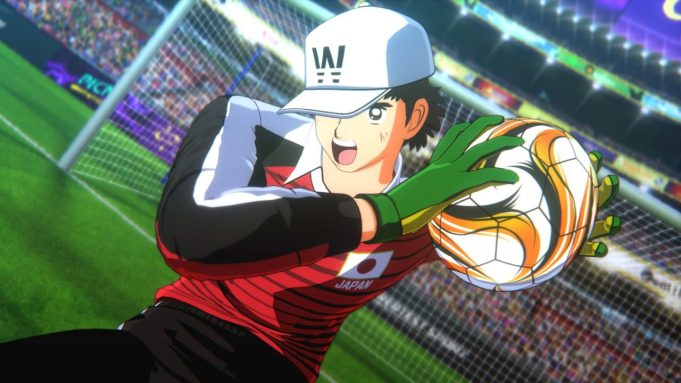 I alluded to this before, but some of the cutscenes can become repetitive, especially on the pitch. Hitting a special shot usually sets off a series of close-ups that go something like “seeing Tsubasa draw on a special power, Tsubasa shoots the ball,” and ends with “the keeper either catching it or seeing it burst through his hands for a goal.” It can vary a little based upon the character’s special powers but it does get a little repetitive at times.

This game isn’t really centered around stats and an actual season, but it could still use some off-the-pitch data, such as player and/or team stats, to help bring a little more of the soccer aspect out. We don’t need advanced stats like “Expected Goals” but just a tally of goals and assists would be nice. 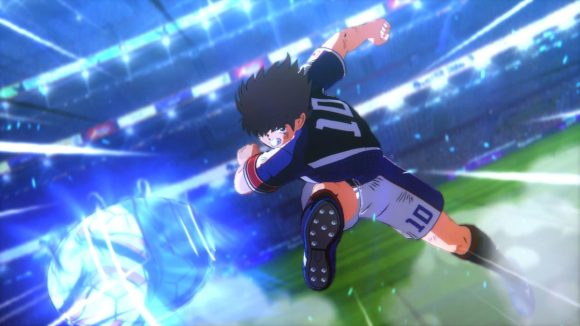 I’ve reviewed quite a few soccer games during my time here at OS, and more often than not I instantly delete them off my PS4 hard drive once I’m done reviewing this. That wasn’t the case with Captain Tsubasa: Rise of New Champions. It’s not enough to get me into anime, but I enjoyed the storyline enough to make me want to see how it plays out.

With its quality visuals, easy-to-learn controls and captivating story mode, Captain Tsubasa: Rise of New Champions is a throwback to what video games should be about: fun.