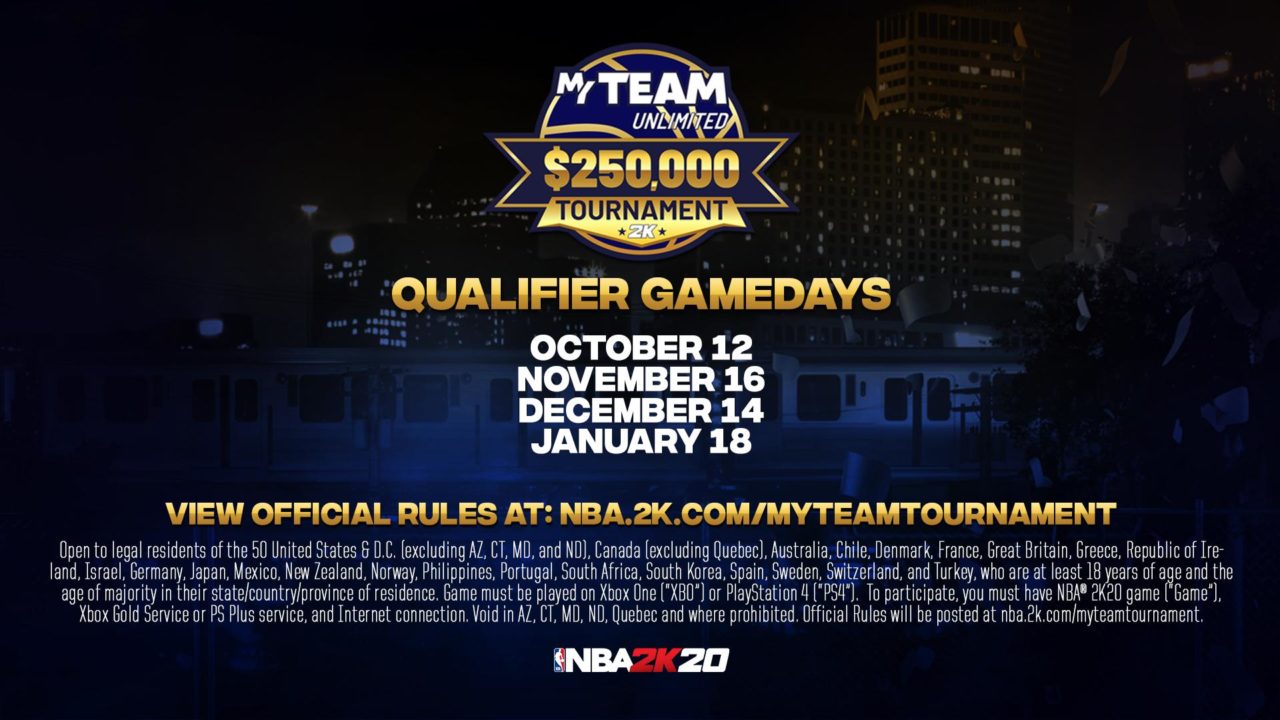 2K today officially confirmed details for NBA 2K20’s MyTEAM Unlimited $250,000 Tournament. The 2nd year global competition is played using the MyTEAM Unlimited mode on Xbox One or PlayStation 4, with contestants choosing any 13 player cards from their deck and competing in 5-on-5, head-to-head games with NBA rules. Qualifying is ongoing until January, when 16 qualifiers per console will compete in a single elimination tournament for a trip to NBA All-Star 2020 and the $250,000 grand prize.

The dates of the four Qualifier GameDays are as follows:

The single elimination tournament begins January 25, with 32 qualifiers playing until only one contestant remains on each console. Both console champions will win a trip to NBA All-Star 2020 in Chicago, where they’ll attend NBA All-Star events and play a head-to-head, best-of-three series on Xbox One for the $250,000 grand prize.

Germany, Japan, Mexico, New Zealand, Norway, Philippines, Portugal, South Africa, South Korea, Spain, Sweden, Switzerland, and Turkey, who are at least 18 years of age and the age of majority in their state/country/province of residence. Game must be played on Xbox One (“XBO”) or PlayStation 4 (“PS4”). To participate, you must have NBA® 2K20 game (“Game”), Xbox Gold Service or PS Plus service, and Internet connection. Void in AZ, CT, MD, ND, Quebec and where prohibited.

The two (2) Finalists (one for XBO and one for PS4) will advance to the Championship Finals currently scheduled to take place in Chicago, Illinois (location subject to change) on or about February 13, 2020 to compete for the $250,000 (U.S.) prize. Each Finalist will win a prize with an ARV of $5,500 (U.S.). Subject to the Official Rules, which will be posted at nba.2k.com/myteamtournament. Sponsored by 2K Games, Inc. (“2K”), a wholly owned subsidiary of Take-Two Interactive Software, Inc., 10 Hamilton Landing, Novato, CA 94949, USA.