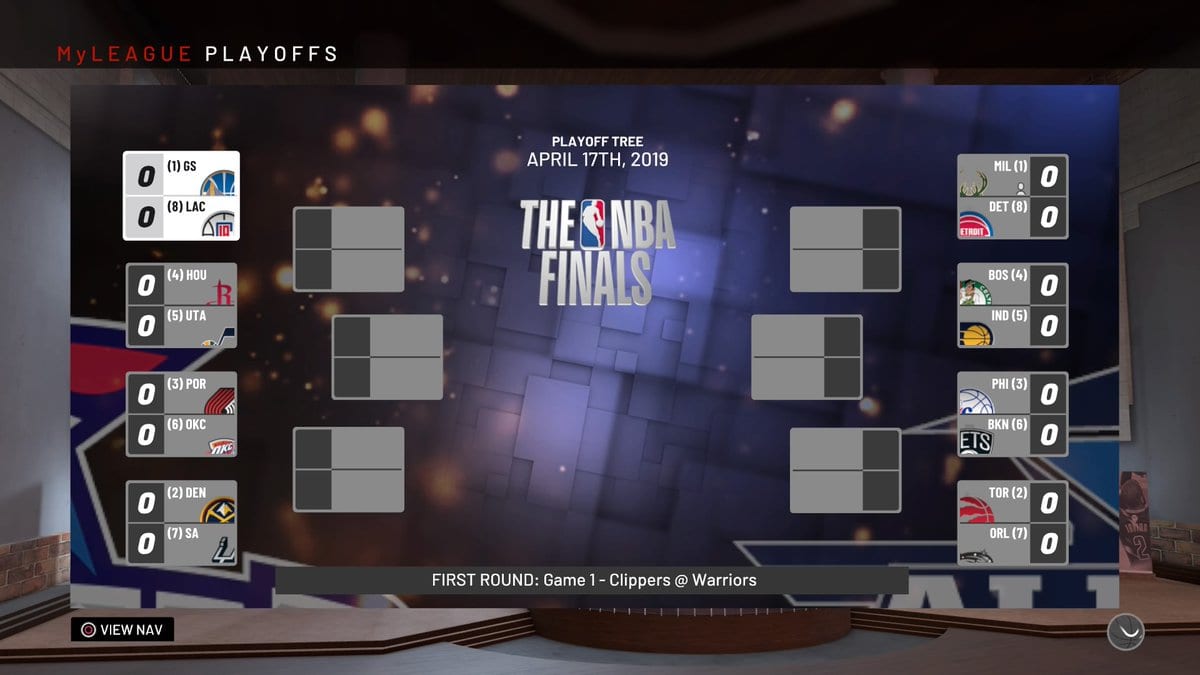 The NBA playoffs have arrived and it’s time to determine who is the best team in the league. There are several intriguing storylines this year: Will the Warriors finish their quest for back-to-back-to-back titles? Can the Rockets finally get past the Warriors? Will Damian Lillard rebound from his awful playoffs last year? The East Conference is wide open and will have a new team representing them in the finals due to LeBron James joining the Lakers. Will the Raptors’ bet on Kawhi work out with a finals appearance? Is this the year The Process is finally complete in Philadelphia? Can Giannis lead the Bucks to the finals after a strong regular season? I ran an NBA 2K simulation and the results are below: 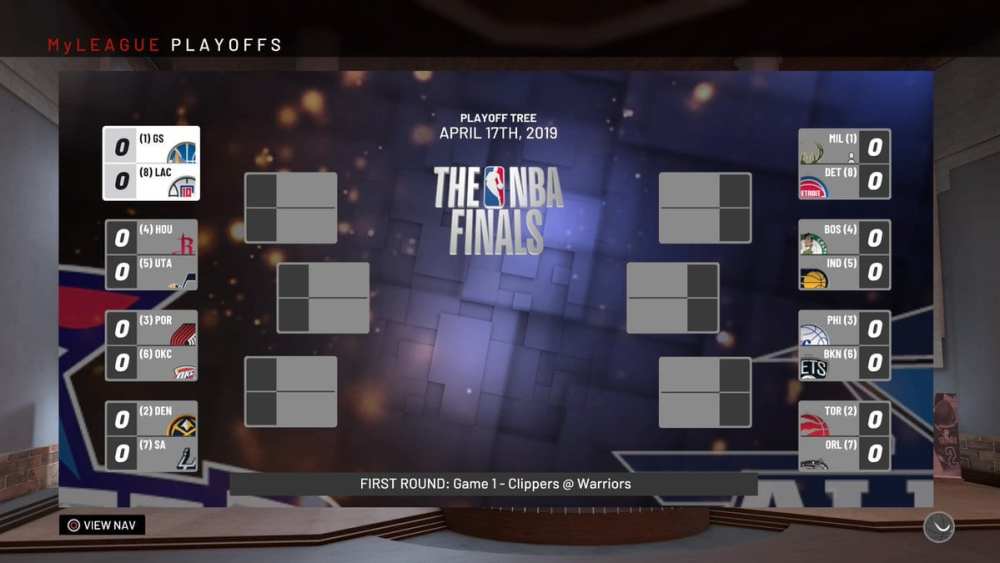 It looks like all top seeds advanced to the next round. The Warriors and Nuggets swept the Clippers and Spurs in four games. The Rockets and Blazers got past the Jazz and Thunder in six games. It’s a disappointing finish for both the Thunder and Jazz as they had high hopes of advancing past the first round. All of the top seeds in the East advanced into the second round. The Bucks and Pistons went a surprising seven games with the Bucks outlasting the Pistons in the deciding game 108-95. The Raptors swept the Magic in four games. Both the Celtics and the 76ers advanced in six games against the Pacers and Nets.

It looks like Damian Lillard was able to shake off last year’s playoff performance averaging 35 PPG and 6 APG. Russell Westbrook also performed well, averaging 28 PPG, 8 RPG, 8 APG in a losing effort. Giannis was able to put the Bucks on his back with a stat line of 26 PPG, 11 RPG, 6 APG. Playoff rookie D’Angelo Russell had a good series with 24 PPG and 6 APG. DeMarcus Cousins, another playoff rookie, had a solid 17 PPG and 8 RPG in a sweep against the Clippers.

The biggest news from the first round was that James Harden suffered an injury and is out for a couple of weeks.

The second round was filled with upsets with the Nuggets going down to the Blazers in six games. The Blazers have rebounded from a disappointing playoffs last year and now find themselves in the Western Conference Finals. The Warriors and the Rockets went seven games once again with the Warriors winning once again 106-90. James Harden returned for the final game from injury but was ineffective, only racking up 22 points. It looks like the whole Rockets team struggled to make shots as they shot 11/39 (28%) from deep in the game. Meanwhile, the Warriors were on fire from deep shooting 14/33 (42%). Steph Curry lead the way with 24 points and 5/12 from deep.

The East also had an upset as the Philadelphia 76ers outlasted the Raptors in six games. Marc Gasol simply didn’t show up in the series, putting up 11 PPG and 5 RPG in the six games. Kawhi Leonard did show up and played very well, but he now enters free agency with many questions still remaining about his future destination. The 76ers had a team effort with different players coming through each game. In the opening game, Jimmy Butler carried the 76ers with 24 points, while in game three Joel Embiid had a dominating 27 points and 12 rebounds. The close out game was lead by J.J. Redick who had 17 points. The Boston Celtics once again fell short in the playoffs. They were not able to turn the switch come playoff time and lost to the Bucks in six games. In the clinching game, it was Eric Bledsoe who ended up leading the Bucks with 24 points. 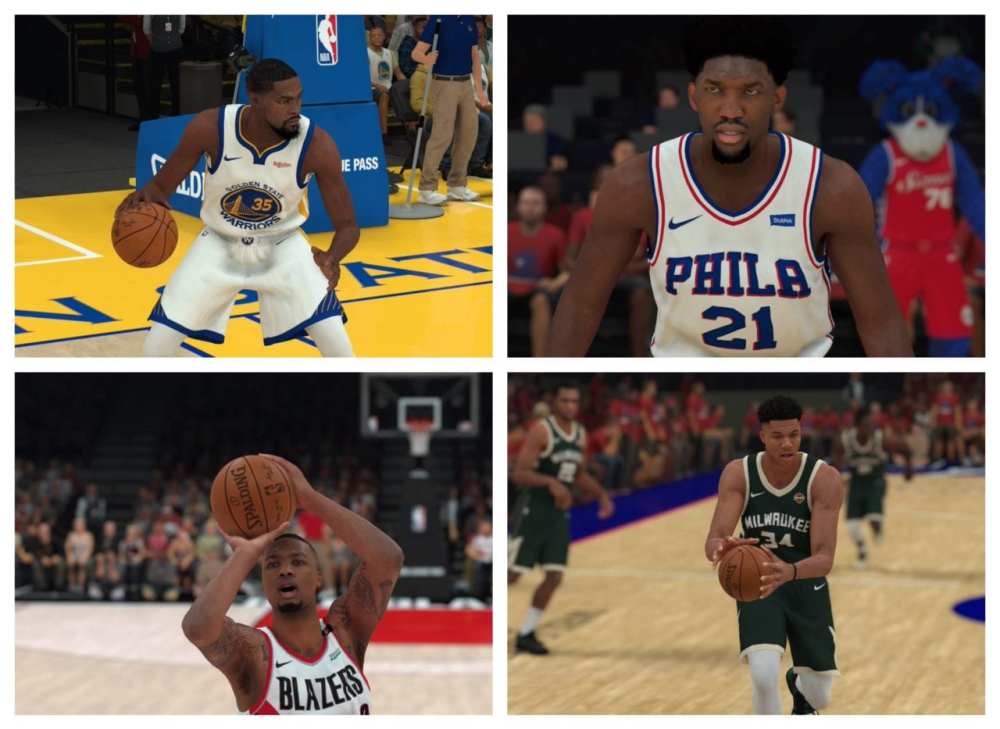 The Golden State Warriors made quick work of the Blazers, showing the league they are playing some of their best basketball at the right time. The five game series featured two of the best point guards in the league and they both played to that level. Steph Curry was determined to lead the Warriors to yet another finals as he dropped 49 points in the deciding game. Damian Lillard gave it his all as well but ultimately came up short. The Warriors were clicking on all cylinders as they shot 53 percent with 27 assists in game five. Steph Curry twisted his left knee at the end of game five and is considered day to day entering the finals.

The Milwaukee Bucks showed the league that their regular season was not a fluke as they advanced past the Philadelphia 76ers in seven games. The final game was a rout as the Philadelphia 76ers didn’t show up, only putting up 83 points. The Milwaukee crowd lead the Bucks to a 104-83 blowout in the crucial seventh game. It’s a disappointing end to a 76ers season as they went all in this trade deadline acquiring Jimmy Butler and Tobias Harris. All of the 76ers players struggled to score and it seemed like they were unsure how to get things going in game seven. One 76ers player who did show up was Boban Marjanovic, who poured in a surprising 15 points and 7 rebounds. Ben Simmons was a non-factor only providing 6 points and 6 assists. Once again the Bucks were lead by Giannis Antetokounmpo, who averaged 28 PPG, 10 RPG and 7 APG throughout the series. In the final game, he came up big with 28 points and 5 steals. The Bucks also received solid contributions from their role players Nikola Mirotic, Brook Lopez and Eric Bledsoe. 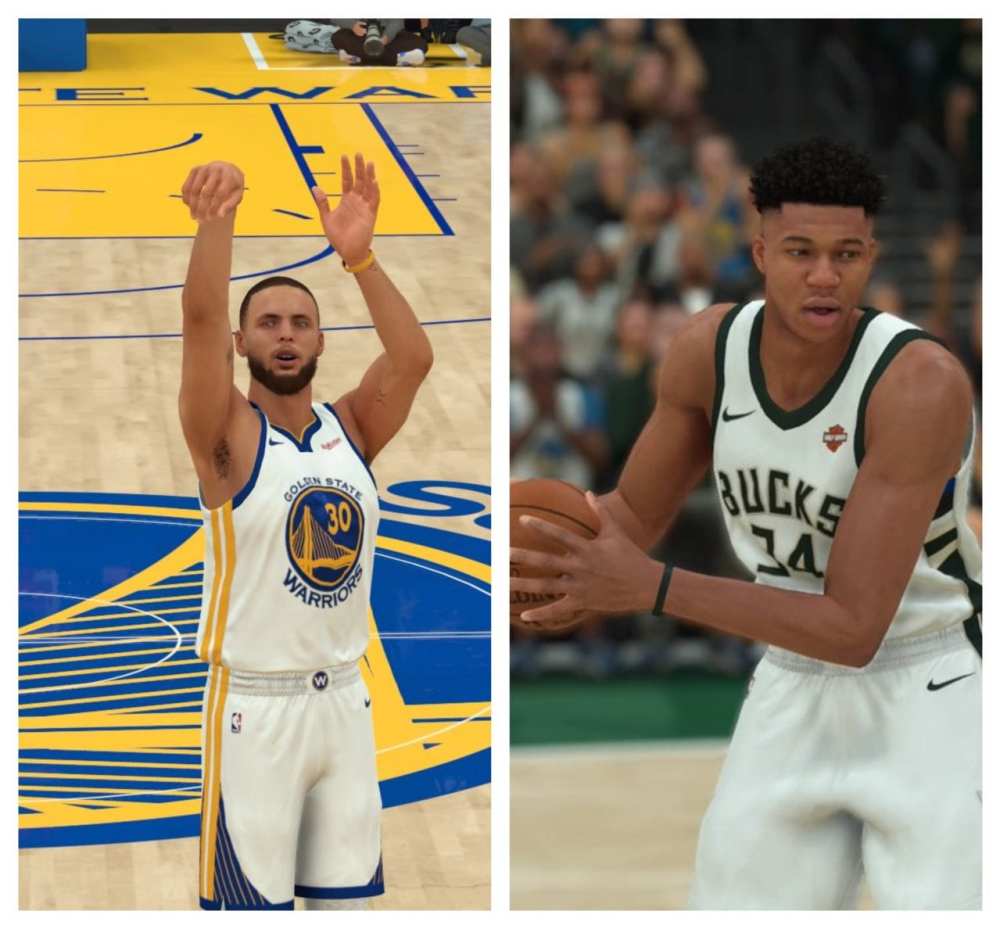 So the Bucks and Warriors will meet in the finals. This is not much of a surprise considering these were the best teams all year.

Game 1: The Warriors headed into Milwaukee and took away home court right away with a 117-94 victory. The Warriors were able to hold Giannis and the rest of the Bucks in check. It seemed like nerves got the best of the Bucks as they shot 9/35 (26%) from deep. Meanwhile, the Warriors were on cruise control shooting an astounding 21/47 (45%) from 3-point range. Steph Curry showed no ill effects from twisting his knee in game five as he dropped 45 points in the opener. Kevin Durant seemed to be a non-factor as he only had 14 points in 42 minutes. His shot was not falling as he shot 6/18 from the field.

Game 2: Milwaukee needed game two to have a chance in the series. Unfortunately, the Warriors were simply too good as they won 106-94. It was bad shooting that did the Bucks in as they shot 9/27 from deep. Giannis was held in check as he only scored 17 points, with 8 rebounds and 3 assists. Khris Middleton poured in 16 points making both of his 3-point attempts. However, the Warriors are champions for a reason and it showed in their game two performance. The Warriors outscored the Bucks 32-22 in the fourth quarter and ultimately ended up being the difference in the game. Steph Curry was once again out for blood as he scored 44 points and made 9-21 from deep. It looks like he is determined to get his hands on the Finals MVP trophy.

Game 3:  The deflated Bucks headed west to Golden State and it showed as they only put up 66 points (108-66). Pau Gasol lead the Bucks with 17 points. The Bucks simply don’t have enough shooting to hang with the Warriors as once again they struggled from deep (5/28). Giannis was a non-factor once again as he only put up 15 points and 7 rebounds. Khris Middleton and Eric Bledsoe really struggled as both shot 2/13. The Warriors were once again lead by Steph Curry who is a lock for Finals MVP. The Warriors really didn’t shoot that well in game three but they didn’t need to with the Bucks struggling to score. The game was a eight point game at half but the Warriors came out firing in the third quarter and finished off the Bucks in the fourth quarter outscoring them by 21.

Game 4: The Bucks knew they were toast but still had to play game four and hope for an epic comeback. However, they were facing a team who was better than them in every facet of the game. The Bucks once again didn’t show up and lost game four 121-75. In a mirror image of games one to three, the Bucks were not able to shoot well enough to hang with the Warriors. This time it was a 5/28 performance from deep, which isn’t nearly good enough to compete with a team like the Warriors. Steph Curry proved he was deserving of Finals MVP, scoring 46 points on 10/21 shooting from deep. The Warriors had the crowd behind them the whole game and Golden State was ready to party early. The rout was on starting in the second half, and it seemed like the Bucks quit with a 39-13 advantage in the fourth quarter. Steph Curry was named Finals MVP, averaging 41 PPG, 6.3 RPG and 5.7 APG. 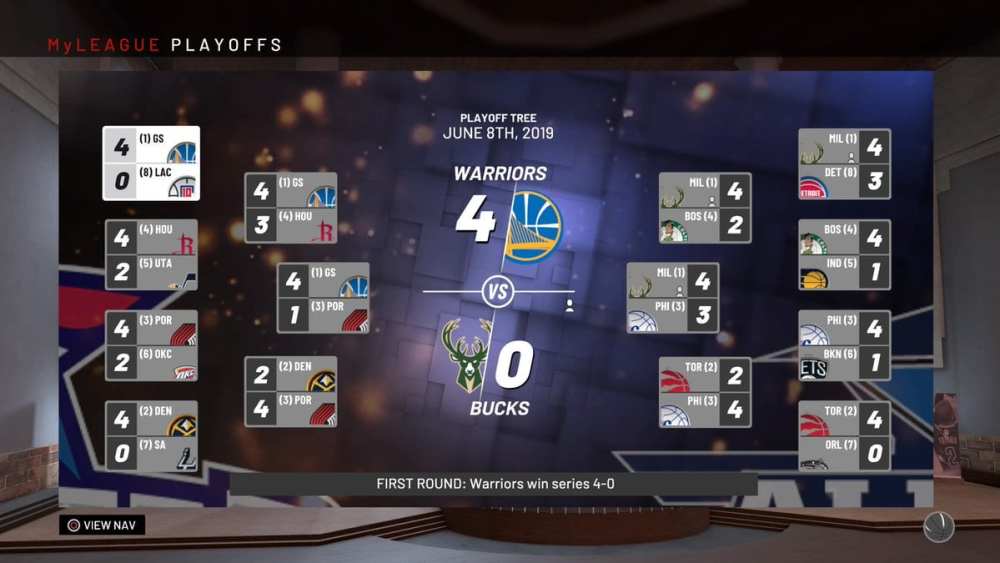 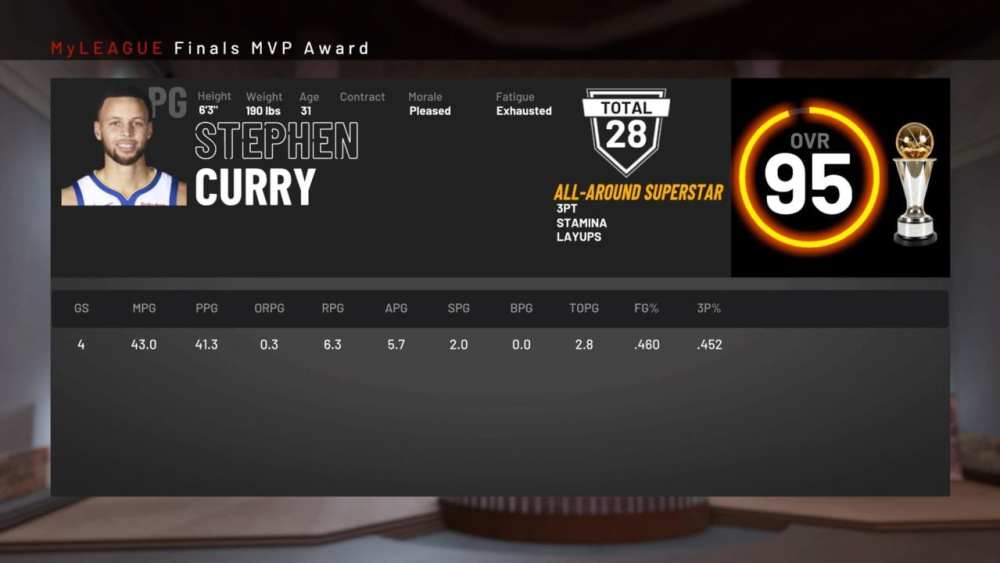 What do you think 2K got right? Do you see any results that were unrealistic? Would the Rockets have beaten the Warriors if James Harden didn’t get hurt? Are there any first-round upsets you foresee happening? Please let us know your thoughts and predictions on what took place in the simulation below.