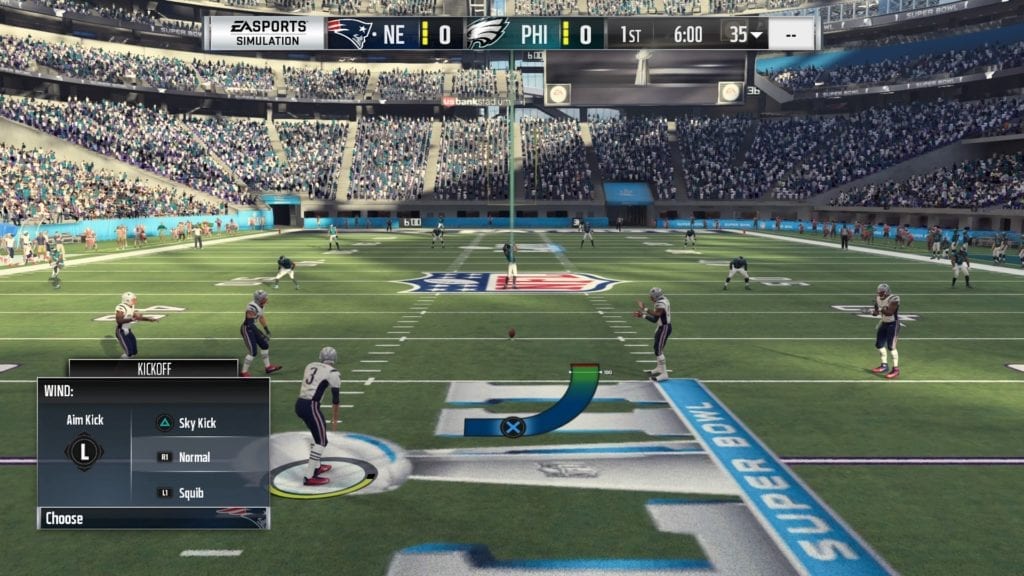 Ahead of Sunday’s Super Bowl LII game between the Eagles and Patriots, EA released their official prediction for the game using a Madden 18 CPU vs. CPU simulation, with the Patriots coming out as champions by a score of 24-20. But really, how much can one measly simulation accurately predict all of the many ways a football game like this could possibly go? As with most things, we could learn a lot more about this matchup with a larger sample size. What if they played this same Super Bowl 10 times? Who would win more times and would that tell us which of the two teams is unquestionably better? With those questions in mind and in the interests of engaging in the celebrated tradition of over-analyzing the Super Bowl up to the point where it’s lost all meaning, we went one step (or 10 steps) further than EA and simulated Super Bowl LII 10 times.

Advantage No One: Well, so much for getting any definitive answers about who is more likely to come out on top in the big game. These simulations suggest that if you played this game 10 times, each team would come out victorious in five of those games. Perhaps one could point to the Eagles holding an advantage in total points scored in these games (Eagles 293, Patriots 280) as a surefire sign of the Eagles becoming Super Bowl champs, but you would most assuredly have to be a die-hard Eagles fan to draw such a conclusion. Instead, the better takeaway is that it truly is anyone’s game this year.

An Exciting Finish: If the results point to anyone at all coming out a winner in Super Bowl 52, it’s clearly the viewers. With an average margin of victory of just 7.3 points for these simulations, the data suggests that this will most likely be a one-score game that comes down to a final drive to decide who wins it all. There were only three games out of the 10 where the victors won by more than one score, so audiences should be pleased to know that a blowout is not a likely scenario here according to Madden.

Best Game Scenario: While it’s tempting to look at the 22-16 overtime game and easily conjure familiar visions of Brady leading the Pats down the field yet again on their first drive of overtime just as he did last year against the Falcons, that game is one of the lower scoring possibilities and even its dramatic OT ending might not be able to salvage it from being a bit of a snoozer for the most part. I’d prefer instead to see the Patriots narrowly edge the Eagles in the 39-38 nail-biter in which Foles leads the Eagles down the field to score a go-ahead TD with 30 seconds left only to see Brady get the Patriots in position for a 48-yard Gostkowski winner as time expires. Eat your heart out, Vinatieri.

Best Game Scenario(s) (LeGarrette Blount Edition): In the Eagles 34-27 victory over the Pats, Blount had 26 carries for 112 yards, and ended any hope of New England and Brady getting a chance to tie when he followed up a 30-yard catch and run on the final drive by running the ball five times in a row to put the game away. Or maybe Blount would prefer the 27-23 victory where he ran the ball 34 times for 165 yards and made sure the Patriots couldn’t get the ball back for one final drive by carrying the ball on a whopping nine straight plays. Needless to say, either of these would be a sweet way to get one over on his old teammates.

Worst Game Scenario: No one likes a blowout (unless you’re an Eagles or Pats fan coming out on the right end) and the Patriots beating the Eagles 41-24 would be the most lopsided and boring of these scenarios.

Weirdest Game Scenario: Thanks to Madden 18’s trademark Super Sim technology being decidedly the opposite of super, the Eagles 23-20 victory did not come without some raised eyebrows. Ater the Patriots ran a play with 16 seconds left on the clock — even more curiously, a five-yard rushing play to get down to the Eagles’ three-yard line — the game summary suddenly ends there. Were they out of timeouts and didn’t have enough time to get the field goal unit out on the field to tie it? But then why even call the running play if they had no timeouts remaining? Regardless, if we see Bill Belichick majorly mess up time management and cause his team to lose in the waning moments on Sunday, be sure to think of this peculiar game. 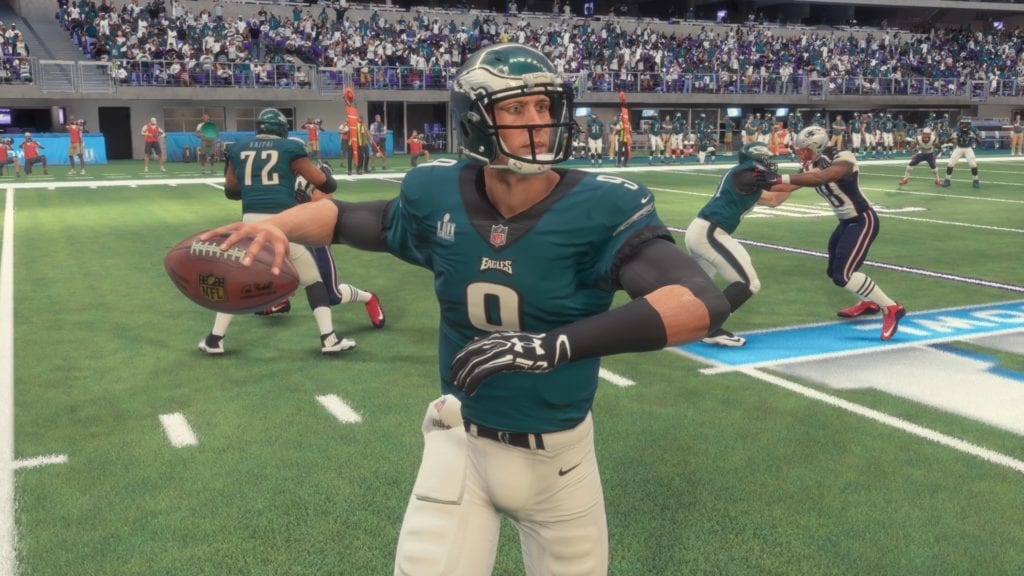 Madden’s numbers suggest that five-time Super Bowl champ Tom Brady doesn’t have as much as an advantage over backup Nick Foles as you might expect, with Brady being slightly less accurate and a little more likely than Foles to throw an interception in the game, perhaps also a byproduct of the Eagles’ opportunistic defense. 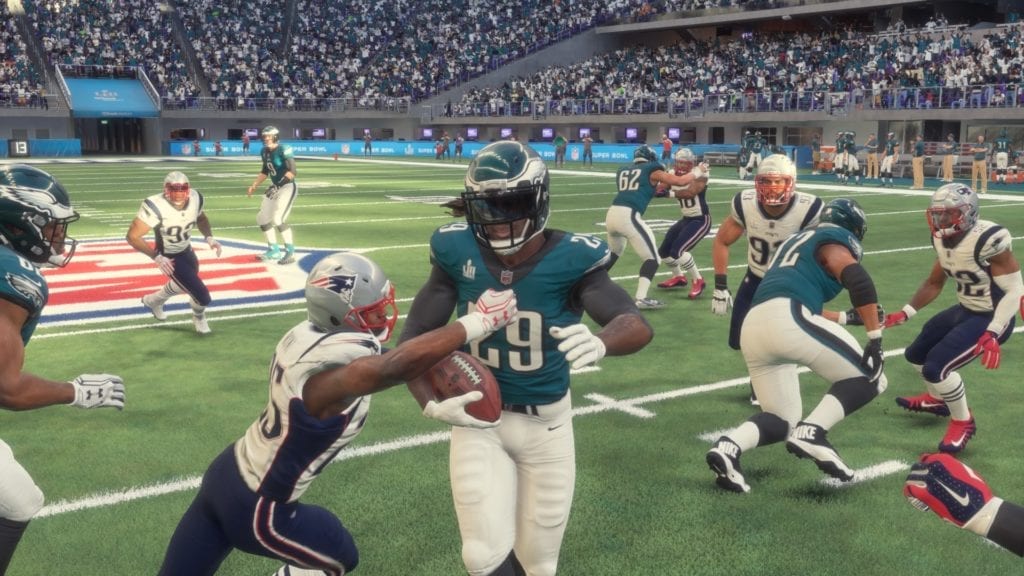 Madden can clearly sense how much Blount wants to stick it to his old team, as he’s projected to out-gain the Pats’ leading rusher, Dion Lewis, by more than 10 yards and rack up over 100 yards on the ground. What’s stranger, though, is how much Madden sees Brady (and Foles, for that matter) getting involved in the ground game, suggesting that he will rush about eight times in the game and get more going with his legs than Jay Ajayi. Either this is another chink in the armor of Madden’s Super Sim technology or the game knows something most prognosticators don’t. 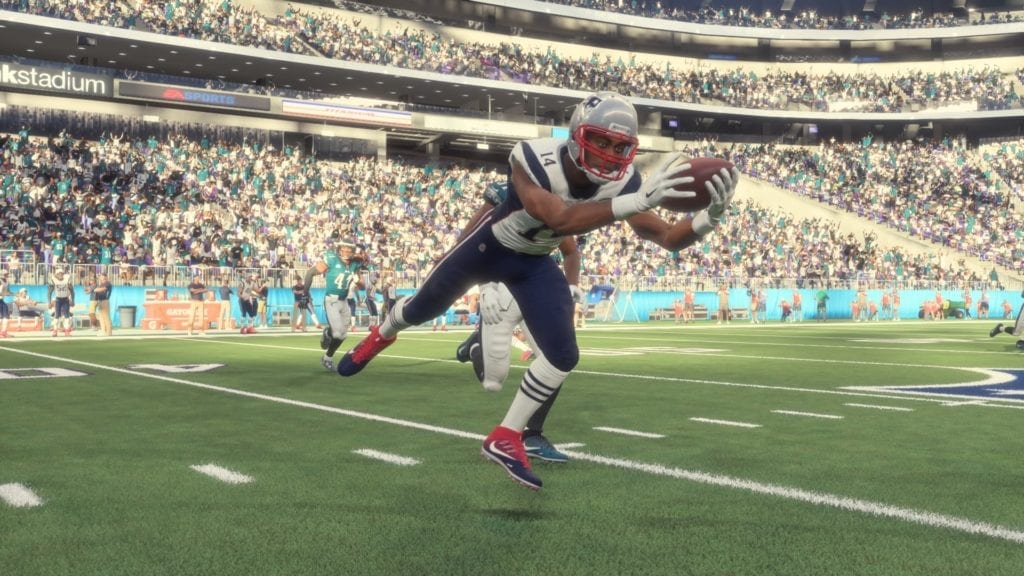 Cooks and Jeffery being the most dangerous weapons on their respective teams is to be expected, but I’m pretty sure the most surprising takeaway here has to be that Madden is convinced Torrey Smith is going to have as much of an impact on this game as Rob Gronkowski. 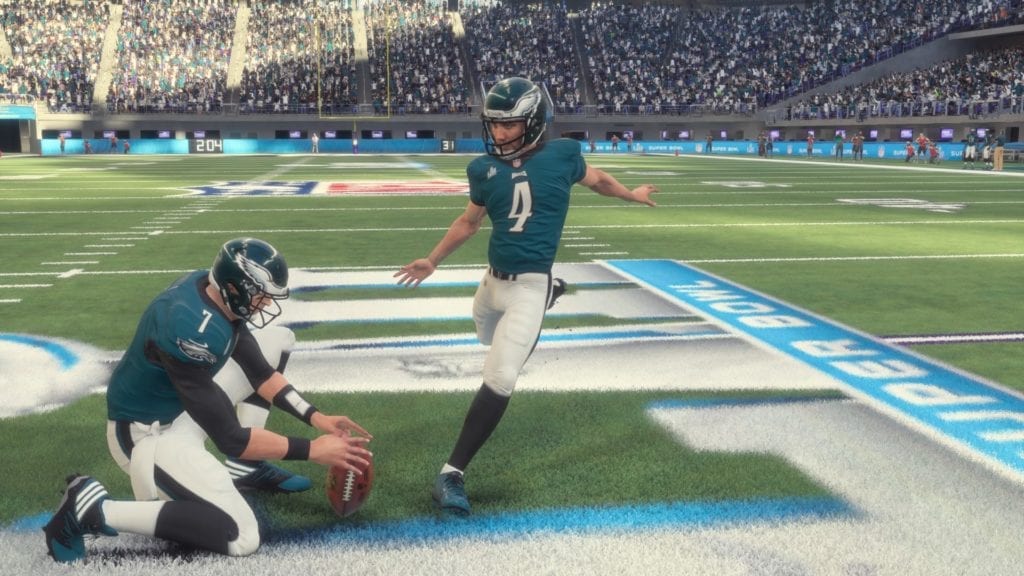 Bets that will win based on these simulations:

Eagles +4.5: The data suggests that it’s the Eagles who should instead be favored by either 1 or 1.5, so getting 4.5 points would be more than enough. It’s of note that there are only two of the 10 games in which the Eagles would not cover the spread.

Over 48.5 points: With the Eagles and Patriots on tap to score a combined 57.3 points based on our results, this one is slated to go well over the projected points. Once again, there are only two of the 10 games in which the teams would stay under 48.5 points.

Will N’Sync Reunite During Halftime Show – Yes: In six out of the 10 Madden simulations, Justin Timberlake got his old boy band back together on stage at halftime and for one glorious moment, it was the ’90s again. Not sure if Super Sim is maybe just nostalgic for some vintage bubblegum pop, but Madden says “Bye Bye Bye” is more than likely going to happen.

With all of the pundits having plenty of time to break down the many ways Super Bowl LII could potentially play out, who’s to say that these Madden 18 simulations can’t be as accurate as any of them in suggesting the eventual outcome? Alongside the admittedly inconclusive assessment that both teams have a 50/50 chance of winning this game, there are some bolder predictions within its visions that would indicate that either the video game has the unique ability to foretell of some rare and unusual events that will play themselves out for the world to see on Sunday, or alternatively maybe just in need of tweaking its Super Sim functionality a little bit. Only time will tell.