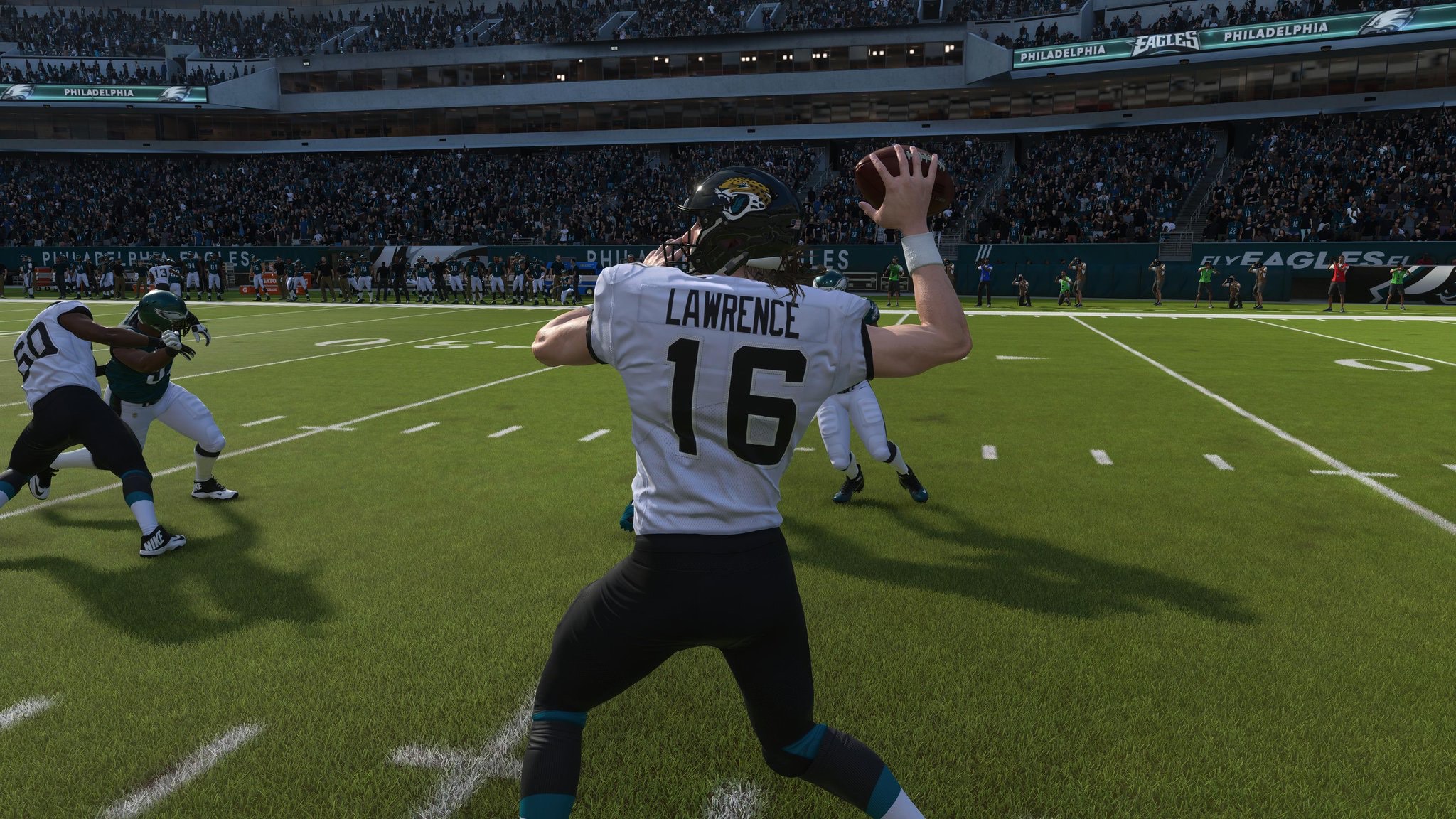 The 2021 NFL Draft has officially concluded, which means we can now start fantasizing about how our favorite NFL teams will look and play in Madden 22, more specifically, how the rookies will play in this year’s game. Now please understand, this list won’t have every rookie, and I’m sure there will be plenty of room for debate over who the top rookies in this year’s game will be. Nevertheless, these players are the cream of the crop — the most talented and definitely the most video-game-like of the group to me.

So, without further delay, here are the top 10 rookies I can’t wait to use in Madden 22.

It seemed like it may never happen, but the Jacksonville Jaguars finally have a franchise quarterback, and his name is Trevor Lawrence. The once-in-a-generation prospect from Clemson, Lawrence can make all the throws and can take off and run. He’s the perfect Madden quarterback. Jacksonville already had pass catchers in D.J. Chark and Laviska Shenault Jr. and a capable running back in James Robinson. They now added Travis Etienne into the mix, as well as several other key pieces. Jacksonville should be one of the more popular teams both online and in franchise mode.

The weapons are nice, but Trevor Lawrence is special. He could debut as the highest-rated rookie QB of all time. Heck, even if you prefer to start a fantasy draft before starting your CFM with friends, Lawrence will be among the top players drafted. 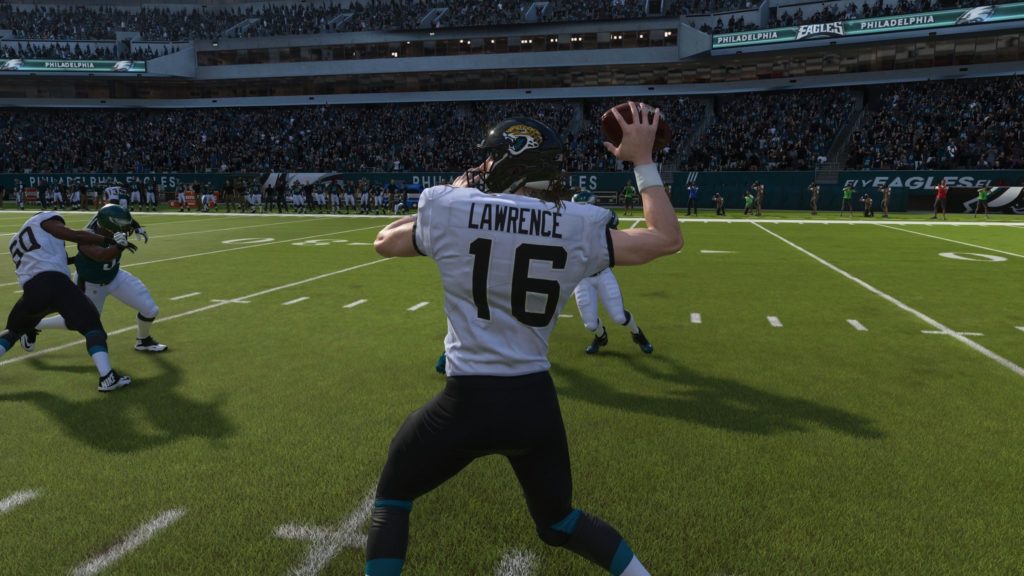 Since I mentioned Travis Etienne above, I probably should also cover what type of explosive playmaker he is, and what his presence is going to bring to the Jaguars. Etienne is a running back, but he’s just as capable as lining up in the slot and catching passes like a wide receiver. He can do it all. And whether you’re controlling the Jaguars in your season-long franchise or trying to build the ultimate team, Travis Etienne is going to be one of the most dynamic running backs not only in Madden but the entire NFL. He’s a speed demon, and I can’t wait to use Etienne’s speed in the screen game. And we all know how deadly zone stretches, HB tosses, and counters can be with the right player.

Etienne is that guy. (RPOs are going to be cheese with Lawerence/Etienne.) 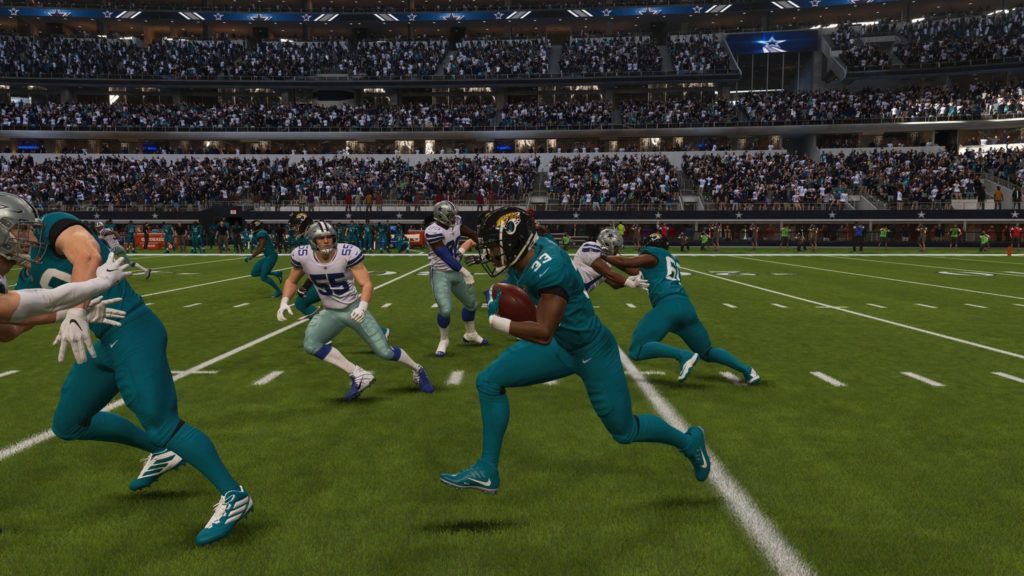 I don’t know if Jalen Hurts is the answer in Philadelphia. However, I know that adding an explosive playmaker to his arsenal of weapons is a good idea. Yes, Philly’s offense already had a few weapons, and with a mobile quarterback like Hurts at the helm, all they were missing was that big-play wide receiver. DeVonta Smith definitely fits that mold after having THE BEST SEASON EVER from a wide receiver in all of college football last season — on his way to a Heisman trophy. Smith’s playmaking style is straight out of a video game. He can also run all the routes well. So, I expect his traits to be among some of the best in this class, even if his overall doesn’t rank at the top. Every time Smith touches the football, good things happen.

I expect him to be one of the most explosive players in Madden 22. In real life, expect much of the same. 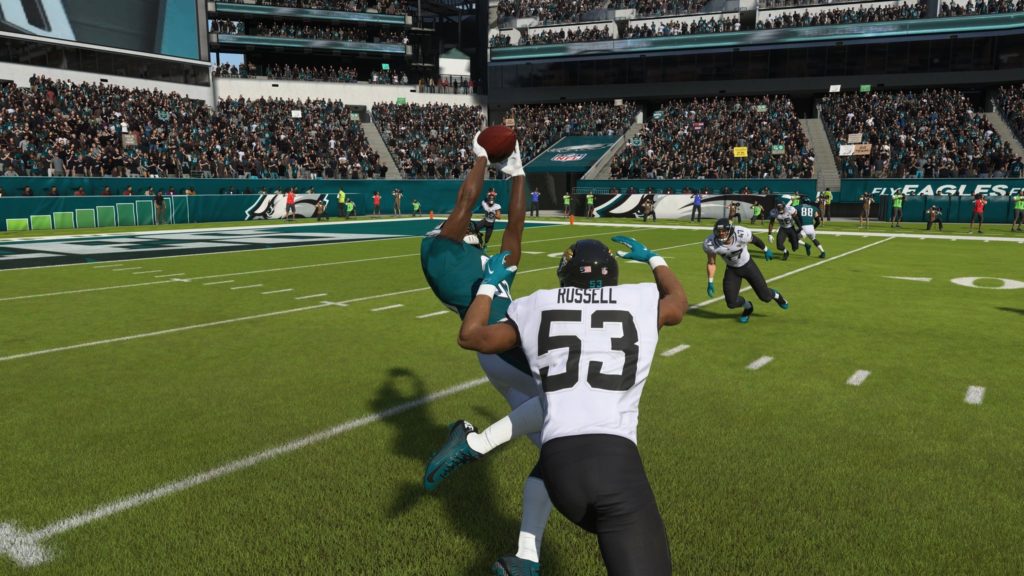 For me, there is no position I’d rather manually control in Madden than the linebacker position. And in this year’s class, there was only one linebacker who stood out above and beyond the rest. His name is Micah Parsons, and the versatile Penn State linebacker landed in Dallas where he will be paired alongside Leighton Vander Esch and Jaylon Smith to form one of the best trio of linebackers in the game. Dallas’s defense will be impossible to run against, and there’s really nothing Parsons can’t do. He can rush the passer, blitz up the middle, and even prove to be solid in coverage. He’s also fast, like Madden-cheese fast.

I look forward to protecting the middle of the field with Micah Parsons in Madden 22. 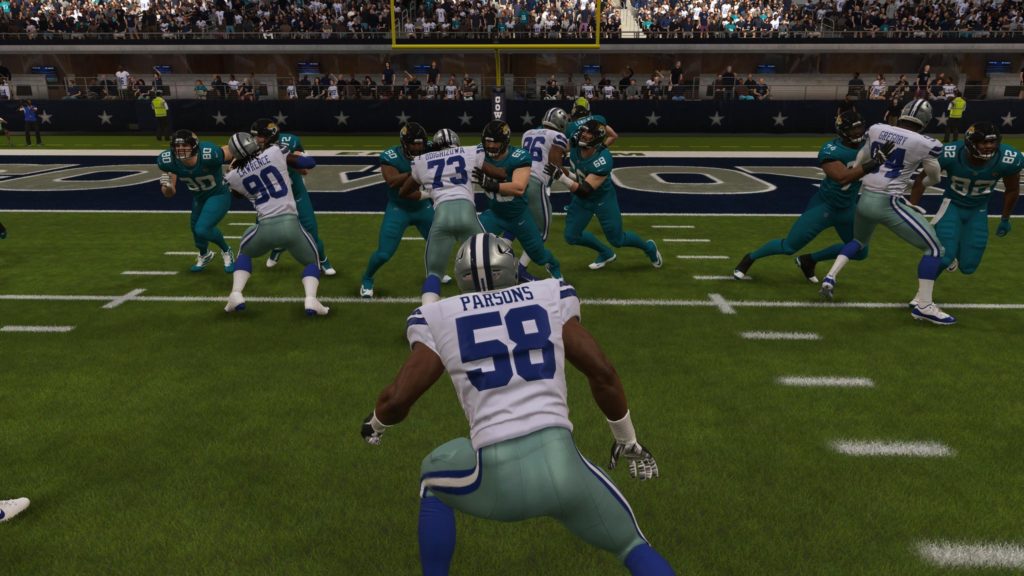 If Kyle Pitts is overpowered in real life, I can’t imagine what type of shenanigans he will be in Madden. I mean, running seam routes all day or flexing Pitts out wide to match up one-on-one with a linebacker or slot corner spells trouble for everyone. Pitts is the ultimate offensive chess piece, and he should be one of the hardest players to stop in this year’s game. Think of all the times you targeted your big-bodied tight end in the passing game, or how angry you’d get trying to step a Travis Kelce or George Kittle — Darren Waller’s name comes to mind as well. Heck, even the next tier of tight ends always seem to be unstoppable in Madden. Kyle Pitts will be no different.

This may quickly become one of the cheesiest players we’ve ever seen in Madden. 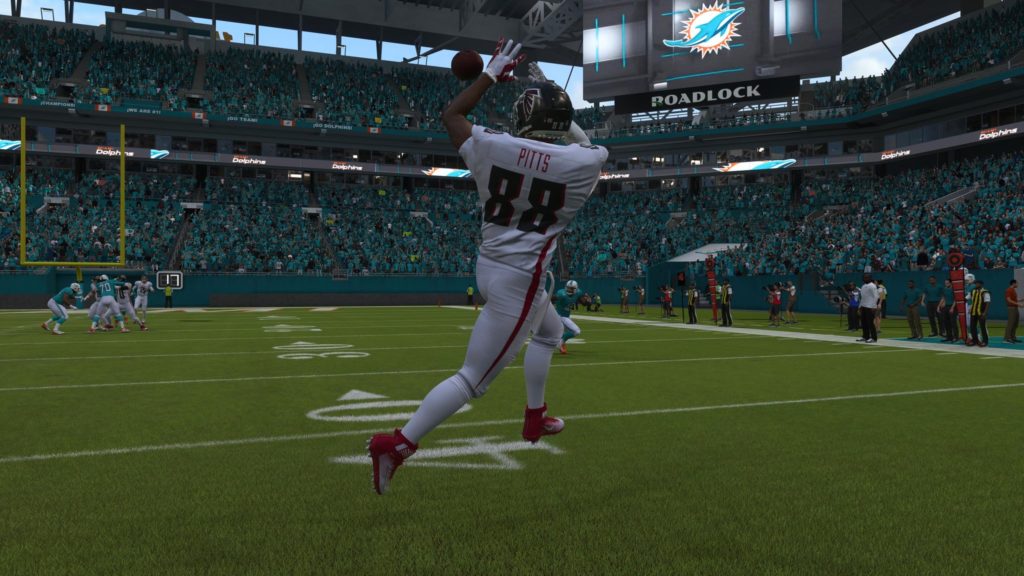 There was no debate about who the top wide receiver was in this year’s draft class, and now that Ja’Marr Chase is reunited with Joe Burrow in Cincinnati, there’s an excellent chance the two players are going to pick up exactly where they left off. See, before DeVonta Smith’s improbable season, Chase was dominating every wide receiver that lined up opposite of him. Think Dez Bryant, but a different breed. He bullies players at the line of scrimmage and can win in multiple ways. Chase is going to be an exciting player to watch for many years. It will be interesting to see how inflated his special catch rating is, in addition to his release.

Chase is a special player who some forgot because he chose to opt-out in 2020. Joe Burrow and Ja’Marr Chase is a duo we should all get used to seeing. 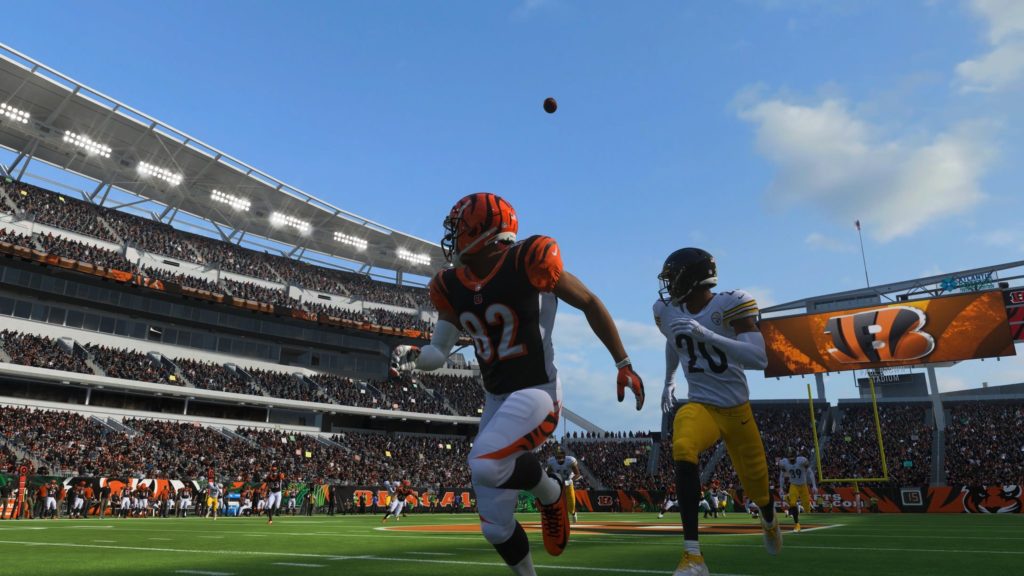 Miami’s defense is oozing with young talented players, especially in the secondary. But the one position the team desperately needed to add talent to this offseason was off the edge (OLB/DE). Enter Miami Hurricanes pass rusher Jaelan Phillips, the 6-foot-5 pass rusher who can set the edge, and stop the run, and get to the quarterback. Phillips has a full toolbox of pass-rush skills. He can swim like Michael Phelps or hit a spin move that would make Tony Hawk blush. Jaelan Phillips will bring speed off the edge unlike anything Dolphins fans have seen since Cam Wake or even Jason Taylor. And let’s not forget, Miami’s secondary should be among the best in the game. Adding a game-changing pass rusher should be overpowered and perfect for those critical third-and-long, pass-rush situations.

Yes, I’m going to be that guy on third and long. 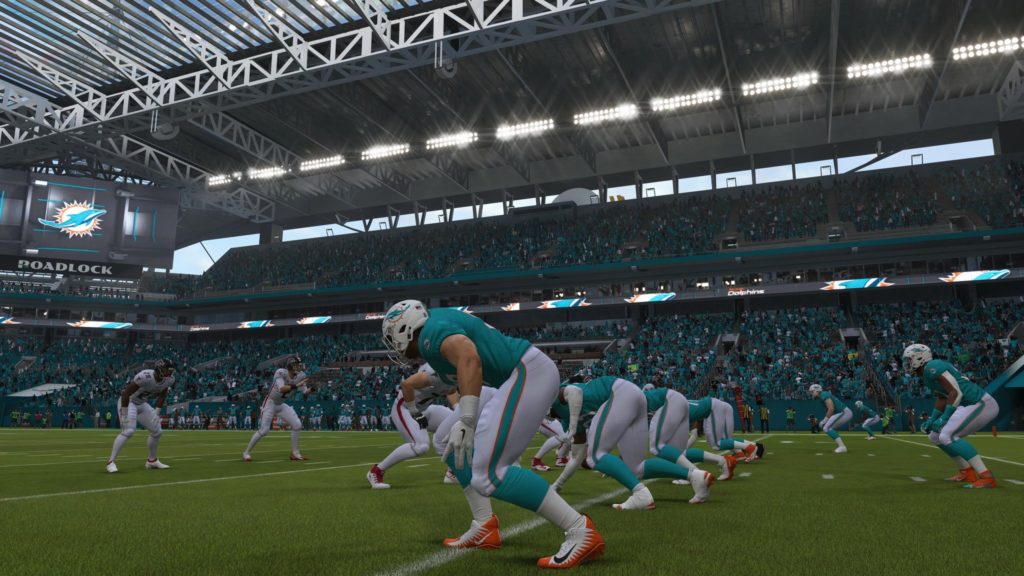 The Bears have been searching for a quarterback for as long as I can remember. Adding a dual-threat like Fields, who can make all the throws on the field, should be exactly what the doctor ordered, especially on the virtual gridiron. What will be most exciting for gamers is how fast he plays. Fields reportedly ran in the 4.4s at his pro day(s), which is definitely among the league’s best. They really don’t make too many players with size, speed, and arm talent. Maybe Cam Newton during his run was one of Madden‘s cheesiest, but I don’t know. Best of all, he’s walking into a team with some perfect weapons, and we all know Allen Robinson is thankful.

This is the perfect marriage for both Fields and the Bears. 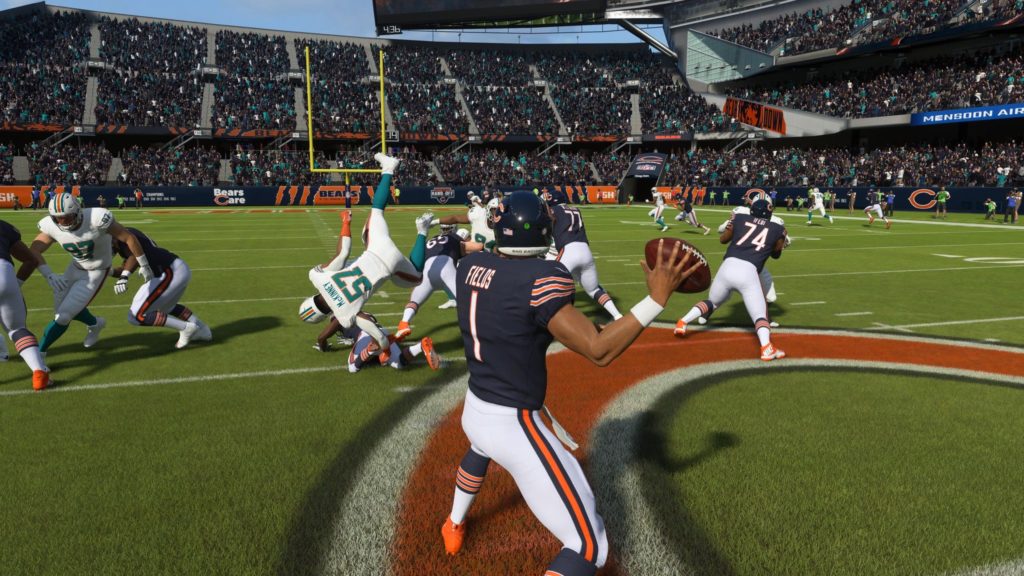 Harris is now the second running back on this list but lands in the better spot to me. Maybe the offensive line isn’t great, but with all of the weapons on the outside, Najee Harris should have room to eat the same way he did at Alabama. In fact, thinking about what Najee Harris will do in the black and yellow is giving me flashbacks to the NFL Gameday era. Jerome Bettis was unstoppable, and I wouldn’t be surprised if Harris has a similar toughness. There are plenty of highlights of Najee Harris trucking through defenders, leaping over defenders, and even shaking defenders with a vicious juke.

He’s the total package, and if you’re like me and rely heavily on the run game, there’s not going to be too many running backs you’d rather have in Madden 22. 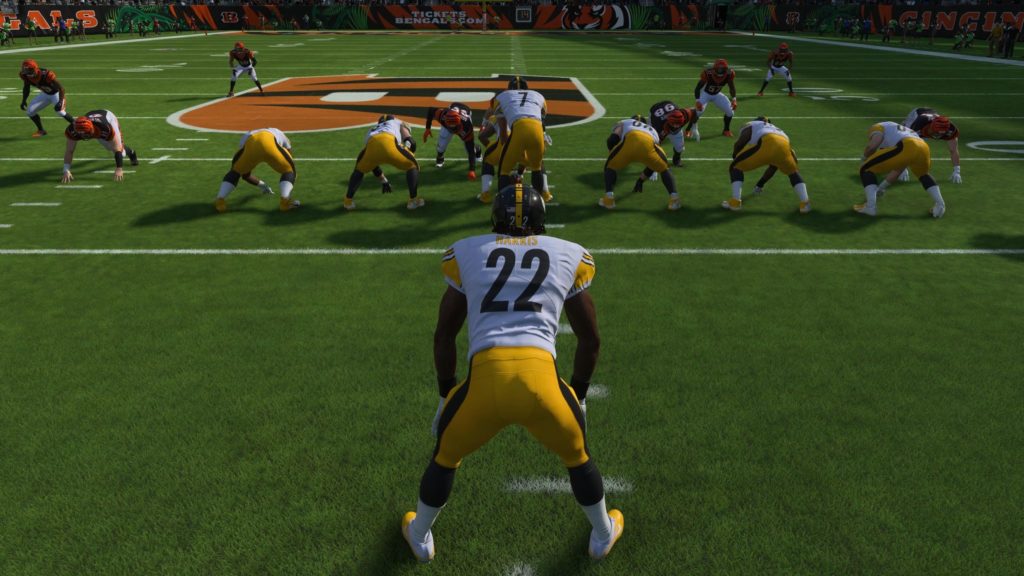 I hate to have two Miami Dolphins players on this list, but when you think about the Tyreek Hill comparisons for Jaylon Waddle and how hard it is to stop that when squaring off against the Kansas City Chiefs or playing anyone online in Ultimate Team, you would understand he had to make this list. Waddle is only 5-foot-10, but every time he touches the football magic happens. Waddle can be an asset in the return game as well (most players can return kicks with a simple re-ordering of the depth chart). During his Alabama tenure, they found ways to get him involved in several ways — jet sweeps, bubble screens, you name it. Waddle is an explosive playmaker. 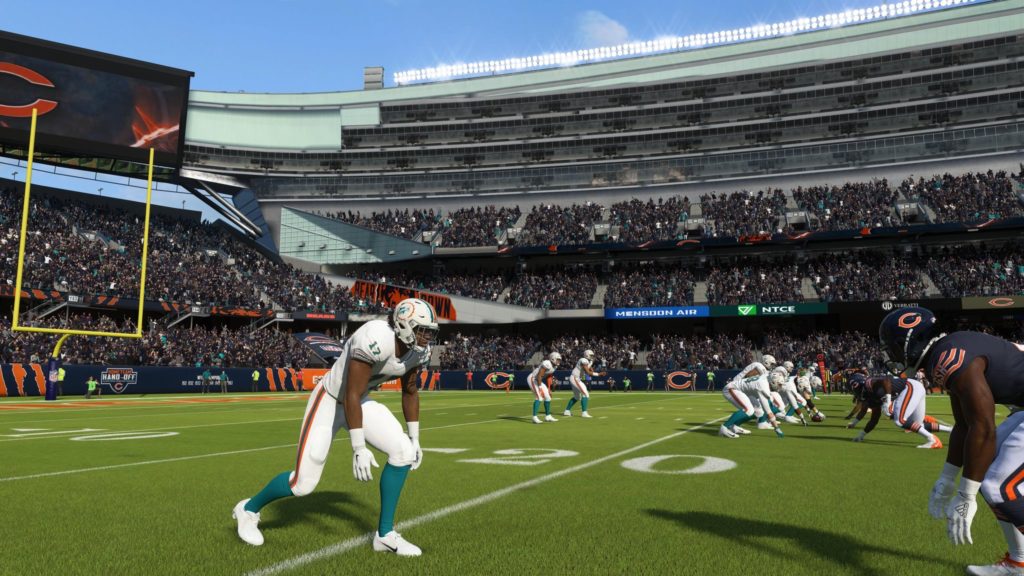 I know I cheated, but I figured I should lump these two players together because they both fit the build of young, mobile quarterbacks who can make unorthodox throws from various angles. They are not the same player, but in Madden, they might as well be. Lance and Wilson both have above-average arm strength, but as I mentioned above, it’s their ability to run and manipulate the pocket that should leave gamers most excited.

Zach Wilson? Trey Lance? Both players should be fun to control in Madden 22. 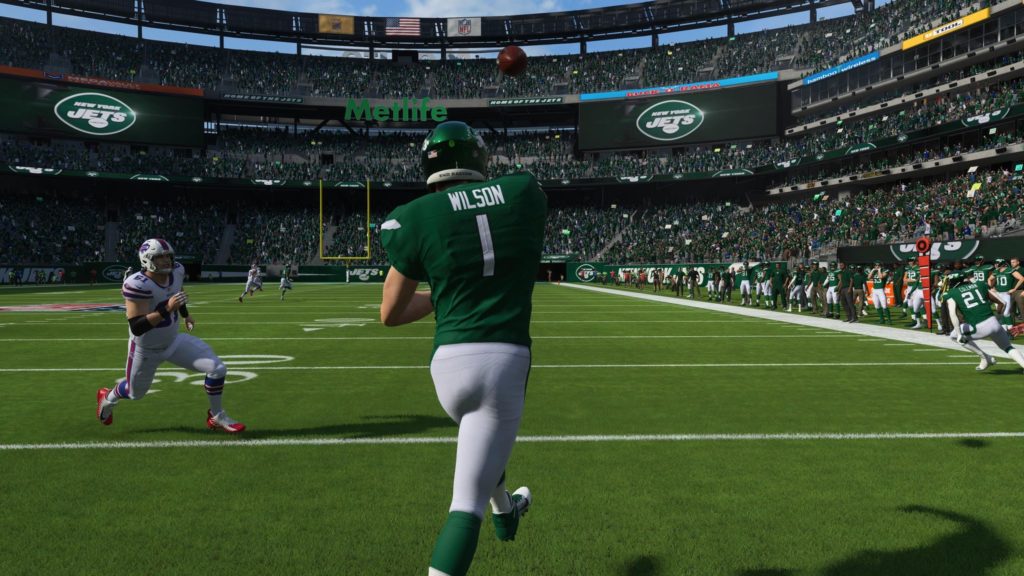 Which rookie draft pick are you most excited to use in Madden 22? Also if you want to check out some of these rookies, be sure to check out this PS5 roster here, or this Xbox roster here.

With Coordinators Back for Madden 22, What Do You Want From Them?
Top Five Madden Rookies of All-Time