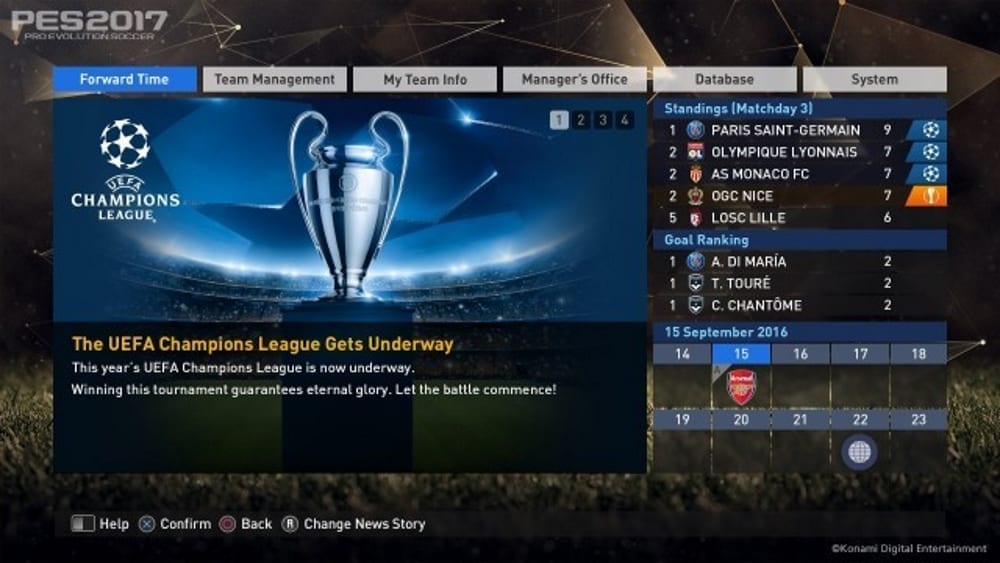 We’re about a month into Pro Evolution Soccer’s (PES) 2017 release, and with completed option files appearing it’s time to jump into PES’ marquee mode, Master League. PES fans know that Master League is where you make your bones, and as manager, scout and director it’s up to you guide the ship. With that said, let’s look at some ways to get the most out of Master League in PES 2017.

There’s no bigger way to put your stamp on the managerial world than by starting from scratch. Being handed a group of players and having to sort out your best 11, formation and tactics resonates deeply with historical PES players. As you come to grips with your squad and add players during the transfer window, the sense of accomplishment when you finally hoist that silverware will be further amplified. The opportunity to gut your favorite club and start anew is a daunting task. Are you up to it?

There’s always a small portion of “fallen on bad times” fan bases that remember how they used to compete at the highest levels. Leeds United, AC Milan and a handful of other clubs around Europe were at one point dominant sides. Now that they’ve bottomed out, do you have it in you to lead them back to the promised land?

Sir Alex Ferguson and Arsene Wenger are the exception when it comes to modern day managerial tenures. The reality is somewhere in between two and three years for you to make your impact, or else you’ll be getting sacked in the morning. Instead of living in fear of the sack, why not embrace it and take a different job every year. Master League by default operates on one-year deals so it’s quite possible to test your managerial acumen on a yearly basis. However, it won’t be easy. You will have to shop wisely and get your business done early in the transfer window to get your team chemistry rating on the uptick in your quest for trophies.

Master League, although not improved upon in recent years, can still offer an immersive and fun experience. With the amount of tactical options at your disposal, a new transfer deadline day and the on-the-pitch variance that PES 2017 brings there’s plenty of enjoyment to be had.

Now that I’ve discussed a few ways to enjoy Master League, tell us how you plan on approaching Master League in PES 2017?

Continue Reading
You may also like...
Related Topics:Master League, pes 2017