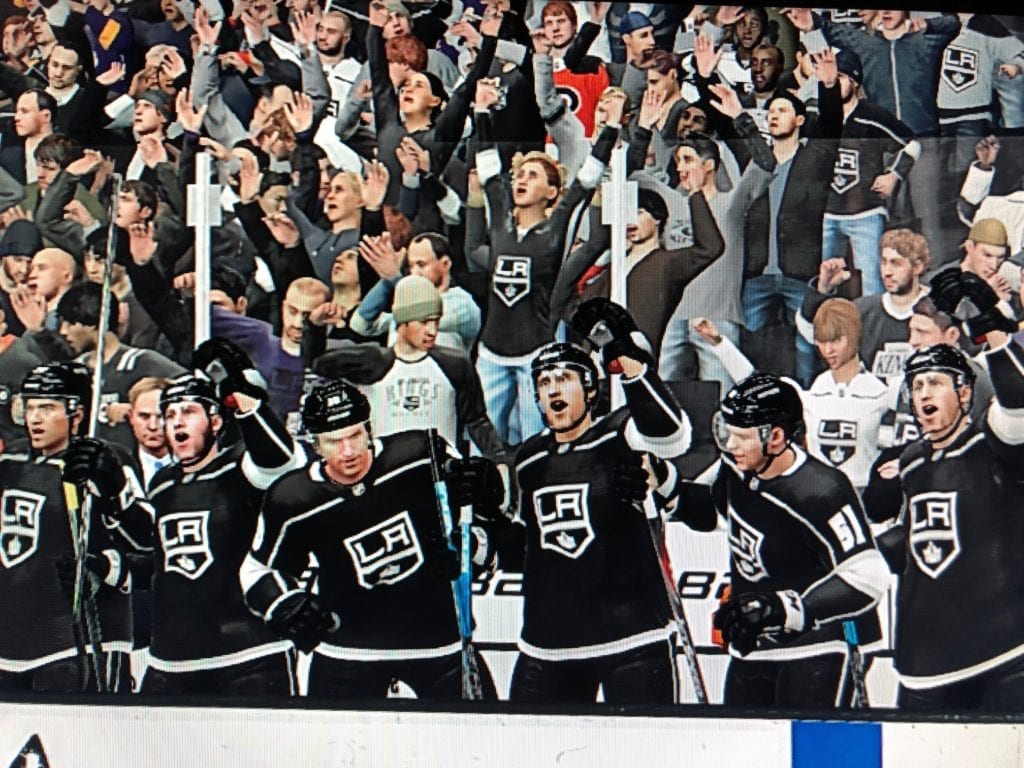 (Starting my franchise I set the length to five years and set the trading difficulty to hard.)

Where the Kings Sit Currently

Four years removed from capturing their second Stanley Cup victory in three seasons the Kings once a dominant defensive team known for their punishing style of play sit dead last in the Western Conference. Perhaps coincidentally the Kings entering this year were also tied for the oldest roster in the NHL at 28.7 years. In a league that is getting faster and pushing younger talent to the top, the Kings once a feared team and perennial Stanley Cup favorite now have to think about rebuilding and becoming younger and more skilled in order to return to their dominance.

Not much this season has gone right for the Kings. It started with the firing of coach John Stevens just thirteen (13) games into the season after a 4-8-1 start. Also, during that thirteen game stretch the Kings produced the leagues worst offense at just 2.15 goals per game. Star goalie Johnathan Quick missed all but four games to start due to injury. Free agent prized scoring forward Ilya Kovalchuk who signed a three (3) year $18.75 million dollar contract this past off season has just seven (7) goals ten (10) assists and is a minus thirteen (13) through twenty seven (27) games. Despite all the bad the LA Kings do have great pieces already in place to quickly turn their team back into contenders. A few moves and the Kings could be right back in the mix of things. So, here is what I did to help the LA Kings clear cap space, get younger and upgrade their offense and team.

The hockey world is already salivating over 17-year-old American phenom Jack Hughes after his jaw-dropping performance in leading Team USA to the title at the World Under-17 Hockey Challenge in November. Since then, he has been lighting up scoreboards and generating headlines across the world for his superior skill and skating. Jack Hughes is a generational talent that instantly can change the direction of the LA Kings. In order to assure the best odds for the LA Kings to obtain the number one (1) overall pick in the 2019 June NHL entry draft and be awarded the opportunity to draft Jack Hughes the loosing needs to continue. To help those odds the LA Kings will need to move current established veterans and take back younger inexperienced prospects with far less expensive contracts.

As tough as it’ll be for some to stomach, the LA Kings need to move their biggest asset. That asset is All Star Norris Trophy winning defense-man Drew Doughty. Doughty is a franchise defense-man but at the age of 29 and a hefty contract extension that kicks in next season (8 years $88 million) the LA Kings can move him to a Stanley Cup contender right now and get a big return.

Toronto gets the elite top pairing defense man they needed and the Kings get the scoring help they desperately needed while getting younger and picking up an extra draft pick for taking on extra money. Nylander immediately slots into that first line right wing spot next to franchise center and captain Anze Kopitar to form a dynamic one two punch.

Still looking to move established veterans for assets and to create cap space I began looking for another trade partner. Continuing the #LOOSEFORHUGHES I identified Alec Martinez as the next chip to move. Martinez is thirty one (31) years old and has three (3) years at $4 million left on his current contract. Looking for another potential Stanley Cup favorite looking to add pieces I came across the Nashville Predators. The Predators do already have one of the best D cores in the league but when pursuing the Cup one can never have enough D.

Secure the number one (1) overall draft pick and draft Jack Hughes.
Hughes immediately gets a roster spot for the upcoming season. Hughes gets to be shielded a bit and slot into the third line center role and learn behind veteran all stars Kopitar and Carter before taking a more prominent role.

An eighteen (18) year old in Jack Hughes and a twenty three (23) year old in William Nylander effectively replace a thirty five (35) year old Ilya Kovalchuk and a thirty year old (30) Carl Hagelin on offense and instantly bring the offense to the next level.

What the Kings Have Coming

In fairness not a whole lot was needed to be done to elevate the LA Kings to being a sneaky contender next year and a potential Stanley Cup contender for years to come. It was just coming to the realization that they needed to trade their franchise Norris Trophy winning defense-man Drew Doughty and then pulling the trigger. Painful sure, but the juice was worth the squeeze in Nylander. William Nylander adds instant credibility and a dynamic-ness to their offense that was sorely missing. Jack Hughes should set the franchise up for fifteen (15) years or so of success.

What do you think about these moves and strategy?
What would you do to turn around the LA Kings?

Top Features Missing From the EA NHL Series
NHL 19 Roster Update Available Now, Based on the First Half of the Season