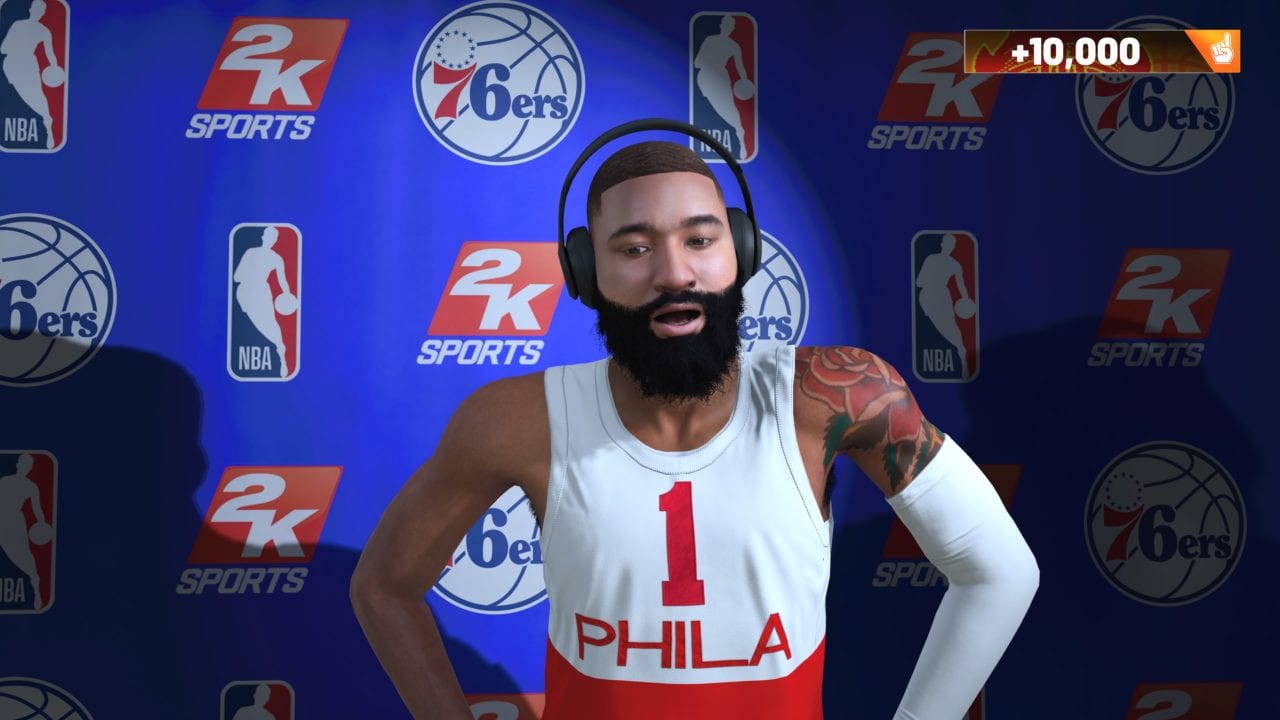 We’re hitting the time of the season where arguments about which team from the Eastern Conference will challenge the Golden State Warriors in the NBA Finals means so much more as rosters are rounding out thanks to the trade deadline, buyout acquisitions and free-agent pickups. 2K Sports is also at the point in the development cycle where they’re working on NBA 2K20, but we can’t close the books on the current 2K title we still have in our hands just yet. Where does NBA 2K19 currently sit now that we’re roughly five months into its current release window? Let’s take a timeout together and see where the game currently sits at this juncture. 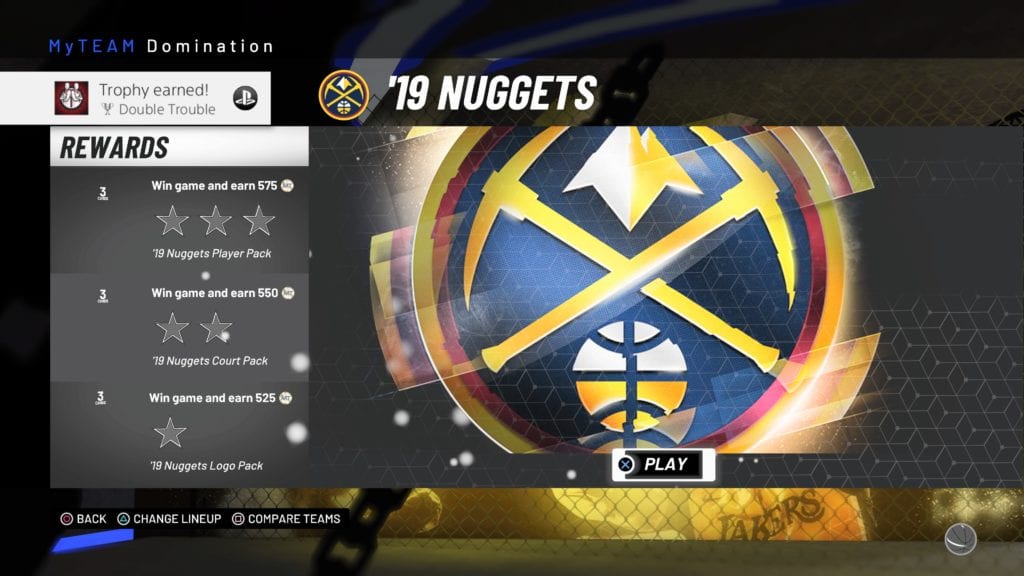 MyTeam has become the fun mode for me.

Still Fun To Play — Depending On What You Play

People who play NBA 2K19 will have their own opinions on what they consider “fun to do” in the game; that opinion would obviously be based on the game mode that each player would frequent the most. For me, playing offline against my friends is what gives the most satisfaction whether I win or lose. MyTeam, which I just started playing while working on this article, is growing on me. It seems like it will take a lot of work and grind to really get deep into the mode and start experiencing the true fun to be had, and the downside is I really see where the “pay to play” and microtransaction beasts start to show their faces. With that being said, hopefully I can garner some success before feeling like I might have to spend real money to be competitive. The “money” mode, MyCareer, is actually stagnant for me now. The grind to 99 just doesn’t work for me based on my real-world obligations. When I do get to get some games in, I get bored pretty quickly just doing the old workout, team practice, NBA game routine. Playing in the Park alone gets frustrating quickly, as most games end up with randoms playing hero ball. All in all, I still enjoy playing NBA 2K19, but really only in spurts. 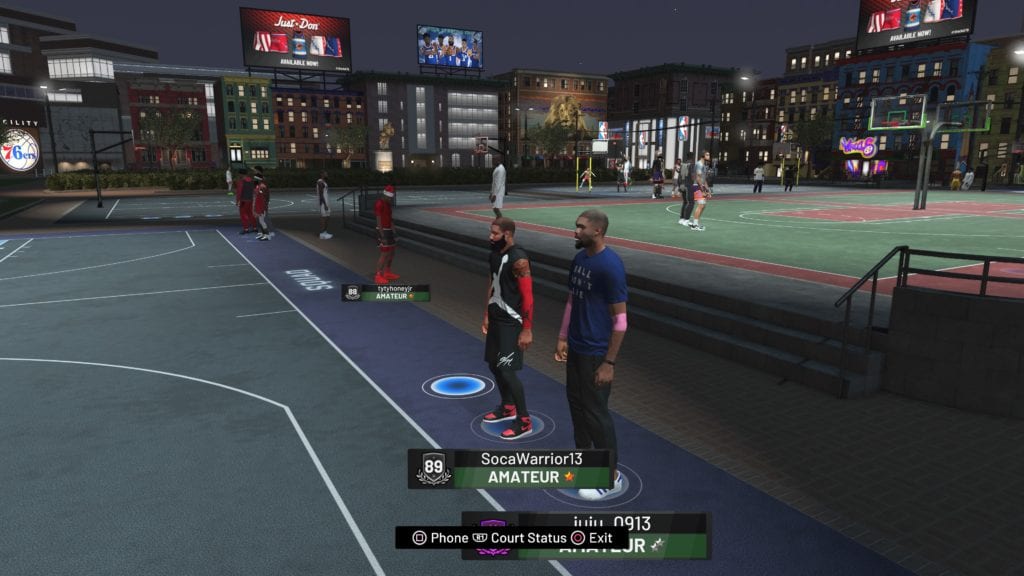 Nothing better than being stuck on the “Got Next” spot because the server craps out.

At this point, I’m not sure what else needs to be said about NBA 2K and the state of the servers. They’re just not up to par. I still experience lag more often than I’d like to admit, and my home internet service is not lousy. Latency online, especially in the Park, is bad but can be downright terrible at times. It’s been something that we as a community have been complaining about a lot about for the last few years. At this juncture, I’m not entirely sure what is involved in 2K improving the servers so all gamers experience better gameplay and reduced latency overall, nor am I sure what suggestions could be made. What I am sure of is that the company needs to figure it out, and figure it out quickly. There’s no reason why latency and delay issues should be affecting people’s online experiences now. 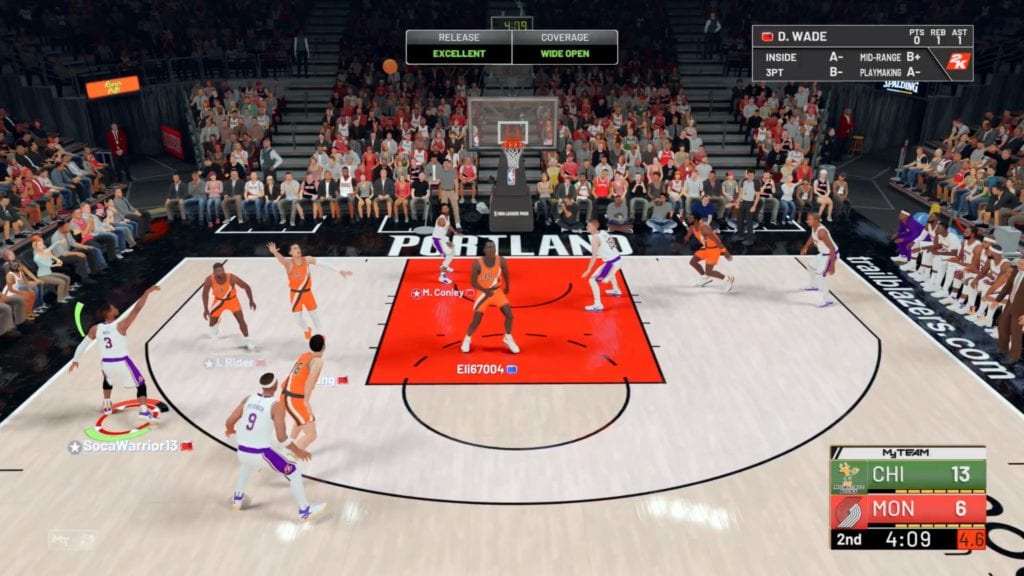 One thing I’ve noticed people still complaining about is NBA 2K19‘s shot mechanics and certain shots not falling when they feel it should. I can safely and honestly say there’s absolutely nothing wrong with the shooting in this year’s game. As has been said from release, there really is an emphasis on understanding shot timing, shot release(s) and taking good shots. The biggest point of the three things I just mentioned is the importance in taking good shots. If you feel that just because you’re using Steph Curry, you can nail a step-back or pull-up three from deep while heavily contested you’re sorely mistaken. The game will punish you for making such bad choices. Yes, Steph does do it in real life quite a bit, but people also need to take into consideration that that type of shot is not a high percentage shot. If you’ve taken the time to try and get your shot timing down, and you work the ball around to get yourself open shots or create open or higher percentage shots, you’ll be happy with your results as you see your scoring increase.

MyCareer this year is a serious grind. You’ll need to put in a serious amount of game time if you plan to hit the coveted 99 overall that everyone wants. Some people were fortunate enough to bypass the amount of time it took to level and pass their cap breakers by figuring out how to initially get a massive amount of postgame MyCareer points playing NBA games. This allowed them to quickly ascend up into the 90s and be competitive faster than others. I’m personally still grinding away and just actually hit 90 overall a couple days ago (sadly). However, I personally don’t mind the grind element in NBA 2K19. It allows the game to have longevity and keeps players coming back as they continuously try to level up their player. The one thing that I feel needs to be addressed in MyCareer is the balancing between NBA games and Park games in terms of the amount of points you earn towards leveling up — and your cap breaker. In an NBA game where you’re playing against the CPU and can literally force feed yourself the ball so that your stat line is always at all-star levels, you can earn roughly 20,000 MyPoints at a minimum. 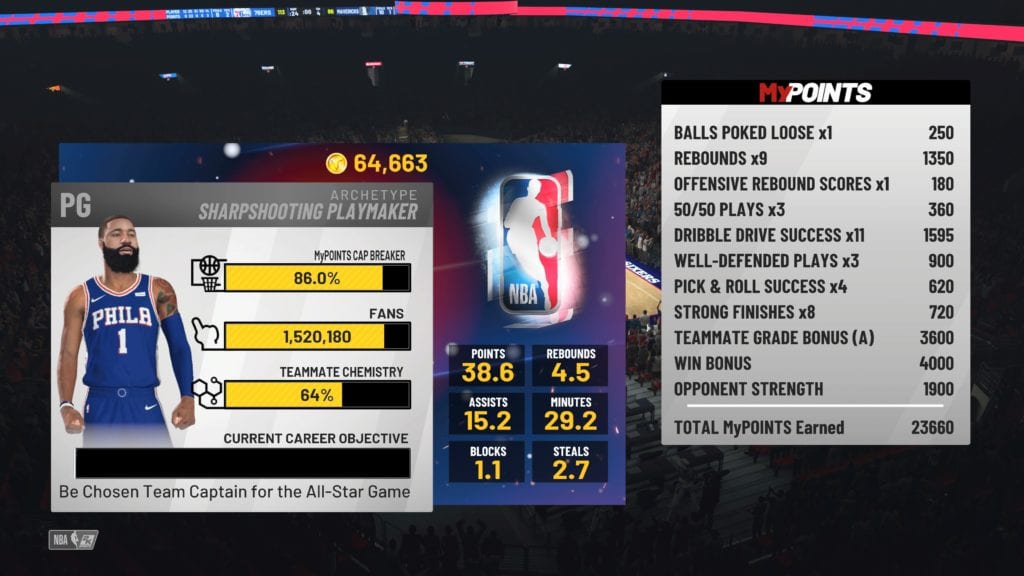 Playing a game in the Park and putting up a pretty good stat line, the most I’ve seen earned in a game was 2,200 MyPoints. Once you’re at an 85 overall, 2,200 MyPoints helps your cap breaker meter increase — barely. I think that there needs to be a balance in how you can earn MyPoints between NBA games and the Park. One thing NBA 2K could innovate on that their competitor has implemented well would be having the NBA and Park still integrated, but allowing for a separation of the MyPoints system. This would create a system where, as suggested by many in the community including social media 2K players such as Agent 00, players have the option to play in a casual or ranked Park system, which could benefit all involved. NBA games would be treated as-is, but retooling and having a casual/ranked Park system could see players earn more MyPoints in the Park to help them increase their overall, but not at as high of a rate as you would see from playing NBA games. This could also help in terms of the servers that I griped about earlier, as you’ll allow people playing for fun to enjoy the casual Park while people that take NBA 2K seriously could duke it out over in the ranked Park. This is one of many possible ways that could help out the MyCareer mode in terms of players grinding out to improve their players, as well as helping the community to enjoy the game at a comfort level that would be appreciated by all.

MyPlayer Dual Archetypes Work, Balance Between Guards And Bigs Does Not

One thing that has definitely worked much better than I really thought it would was the dual-archetype system. The NBA today has evolved dramatically over even the last five years and we’re seeing a much more athletic game of basketball being played. What we’re also starting to see, thanks to the increased athleticism of the players coming into and evolving within the league, is an increase in “positionless basketball” in a more pace-and-space game. Nick Nurse, coach of the Toronto Raptors, uses this system in Toronto where he alters his lineups based on opponent and matchup instead of running a traditional positional starting five. It only made sense that NBA 2K adopted this and brought us the dual archetype system.

Now that we’re five months into the game, we’ve seen the shortcomings of this dual system but it doesn’t fall within the archetypes; the problem lies in the balancing between guards and bigs, more specifically the sharpshooting power forward/stretch big. As we see in the NBA, there are obvious mismatches between guards and bigs, but coaches eventually figure out how best to negate these mismatches. In NBA 2K19, you can’t really stop a sharpshooting power forward from raining threes on you even if you’re in their face. This is a complaint you’ll see all the time now, and one you probably make yourself while playing in the Park. Adding insult to injury, you also apparently can’t steal from power forwards or centers as a guard, even if their ball control rating is low. Instead you see the opposite, where a big will steal or knock the ball out of a guard’s hand more often than not. My archetype for example is a Playmaking Sharpshooter. My ball control rating is now sitting at 90, yet when I play in the Park I get stripped too frequently by bigs. It’s extremely frustrating and leads to me getting ragged on by my teammates, whether it be friends or randoms. The NBA 2K team will probably figure out how to fix this for NBA 2K20, but it’s definitely an issue that causes a lot of frustration in this year’s game. 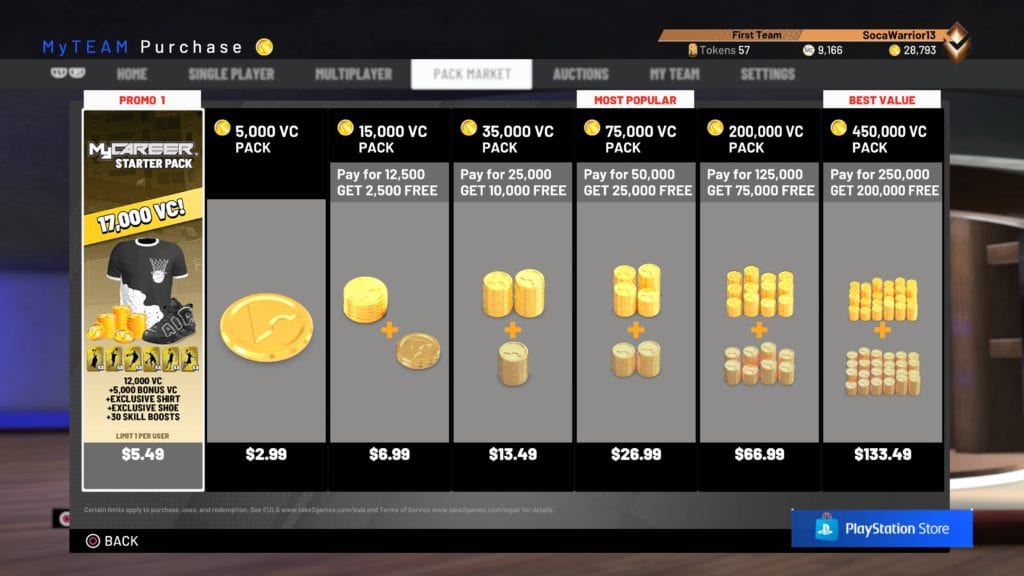 The majority of us will still complain about this until we’re blue in the face, but nothing will come of our cries; microtransactions are still king in NBA 2K19 and they seem to be a necessary evil if you want continued success in MyCareer, MyTeam and even MyGM. In MyCareer, you need coveted VC to do virtually everything in order to improve your player and stay competitive. Surpassed your next cap breaker level and want to up the added attributes? VC. Want some new gear? VC. Want to ball out at Wheels and get a skateboard, scooter or bike? Major VC needed. This isn’t anything new to us. VC has been the lifeblood for MyCareer and MyTeam for a few years now.

If you want to buy card packs in MyTeam, you will need either MyTeam points or VC. It’s obviously much easier to build your team using VC, which ends up with some paying real money to buy the larger box packs instead of individual packs. However, I’d think this is really only done by the hardcore MyTeam fans. In MyGM, you use VC to upgrade your GM level, which provides you with upgrades towards facilities, player/management pitches and badge upgrades. You can upgrade levels by just playing games and doing things within the mode, but it’s obviously much quicker to buy levels with VC. As mentioned earlier, microtransactions have become the norm in NBA 2K19 but the pay-to-win/pay-to-compete nature that has become a mainstay in the game really detracts from the overall experience. Add in the fact that earning VC in-game occurs at a substantially lower rate, and you start to understand why people are really annoyed with the way VC works.

Are you still enjoying the game, or have you moved on due to something I’ve mentioned above or for other reasons? Drop a comment and let us know how you feel about your NBA 2K19 experience at this point in the game’s life.