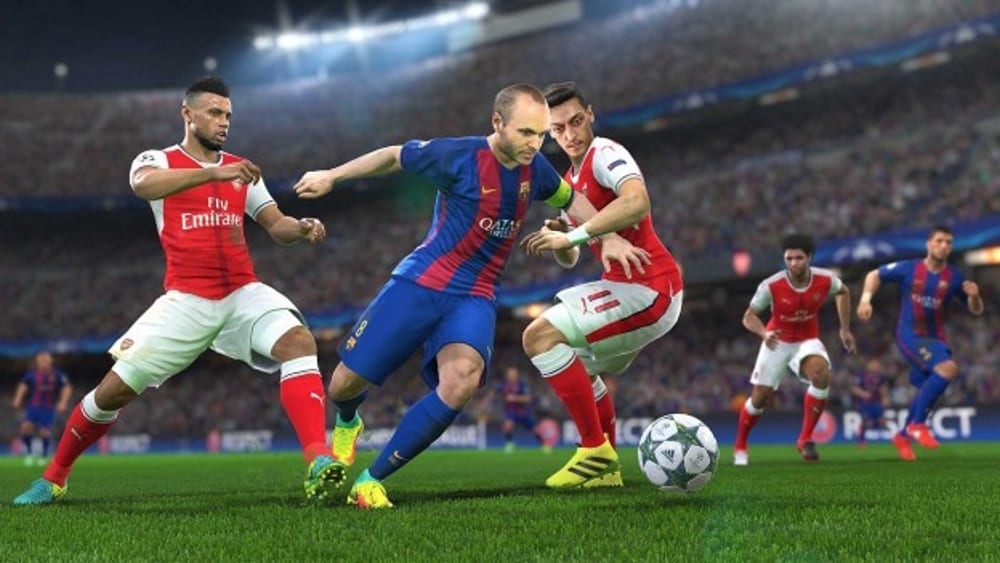 Of all the games I’ve played over the past year, PES 2017 is quickly becoming my favorite. It’s a callback to the days of PES’ (or Winning Eleven’s) rise to prominence in the soccer game scene, when it commanded attention with its outstanding representation of the sport. Although the sales figures might not suggest it, PES 2017 is the mark of a series that is arguably back to its best.

It achieves this by implementing a whole host of careful refinements, capitalizing on last year’s positives and repairing many of its weaknesses to great effect. If the dramatically enhanced goalkeepers of this year’s version aren’t enough to convince the doubters, the game-changing Adaptive AI system should be. Not only are games more balanced, authentic and fluid than last year, but they’re a lot more fun too.

What Has Changed Since Launch?

Thus far, the game has seen very little change since release. Early issues surrounding button lag were largely remedied with the release of a quick turnaround patch, while a temporary problem surrounding MyClub Competitions was quickly rectified. For the latter issue, in-game coins provided a source of compensation.

In terms of patches, PES 2017 is set to benefit from two major updates in the near future, with the release of patches 1.02 and 1.03. The former is being released this week (Thursday), sporting new facial likenesses and player styles for over 39 select players, as well as new pitch-side hoardings, boot styles and more. November’s 1.03 patch is a heftier offering, introducing 4K resolution for the PS4 Pro, Liverpool’s Anfield stadium (complete with the “You’ll Never Walk Alone” crowd chant), Borussia Dortmund’s Signal Iduna Park stadium, and a variety of additional content. Various bug fixes are also set to be addressed across both updates.

What You Are Finding Is The Most Enjoyable Play Experience?

Despite its imperfections, I’m dedicating the majority of my time to Master League at present. The much-improved gameplay of PES 2017 enhances the experience this year, offering increasingly diverse and unique matches on a game-by-game basis. Master League’s extensive analytical data is a highlight once more, while a smattering of new features add extra depth to the mode. That said, the majority of content is quite similar to last year’s offering, and issues surrounding transfers and player regeneration continue to provide the biggest downsides.

I’ve enjoyed what I’ve played of MyClub this year — the PES series’ answer to Ultimate Team. While it fails to match EA’s equivalent in a variety of ways, it gets a pass for being a competent mode going through a long-term building phase. It over-complicates things with the addition of a scout auction system in PES 2017, but player accumulation is otherwise generally well implemented. It’s easy to earn coins if you’re dedicated, and with an abundance of offline and online competitions on offer, there are enough inviting ways to earn them. I’ve willingly put a lot of time into MyClub so far, and I expect to do so over the course of the year.

Is the Game Still Worth Buying New?

PES 2017 is still fairly fresh on the market, and despite it taking pride of place in my Xbox One’s disc drive for the past month or so, it still feels like a fresh purchase. While past iterations of the series have quickly grown old, there aren’t any obvious mechanics to exploit this year, such as generally inept goalkeepers or greatly advantaged playing styles. This is a well designed title that makes big strides over its predecessors in a gameplay environment.

While PES 2017 comes close to perfection on the pitch, it doesn’t excel in every area. The presentation of this year’s game has been dramatically improved, but it still struggles in comparison to the competition. Additionally, those who play online are occasionally susceptible to bouts of lag, although these instances aren’t all that common. The extent to which these weaknesses affect your enjoyment of the experience will vary depending on your perception of them.

This year, the game’s set of modes offer a greater deal of longevity due to PES’ improvements on the pitch. And, while certain areas continue to possess room for improvement, PES 2017‘s general mastery of “the beautiful game” should be enough to keep any soccer connoisseur coming back for more.