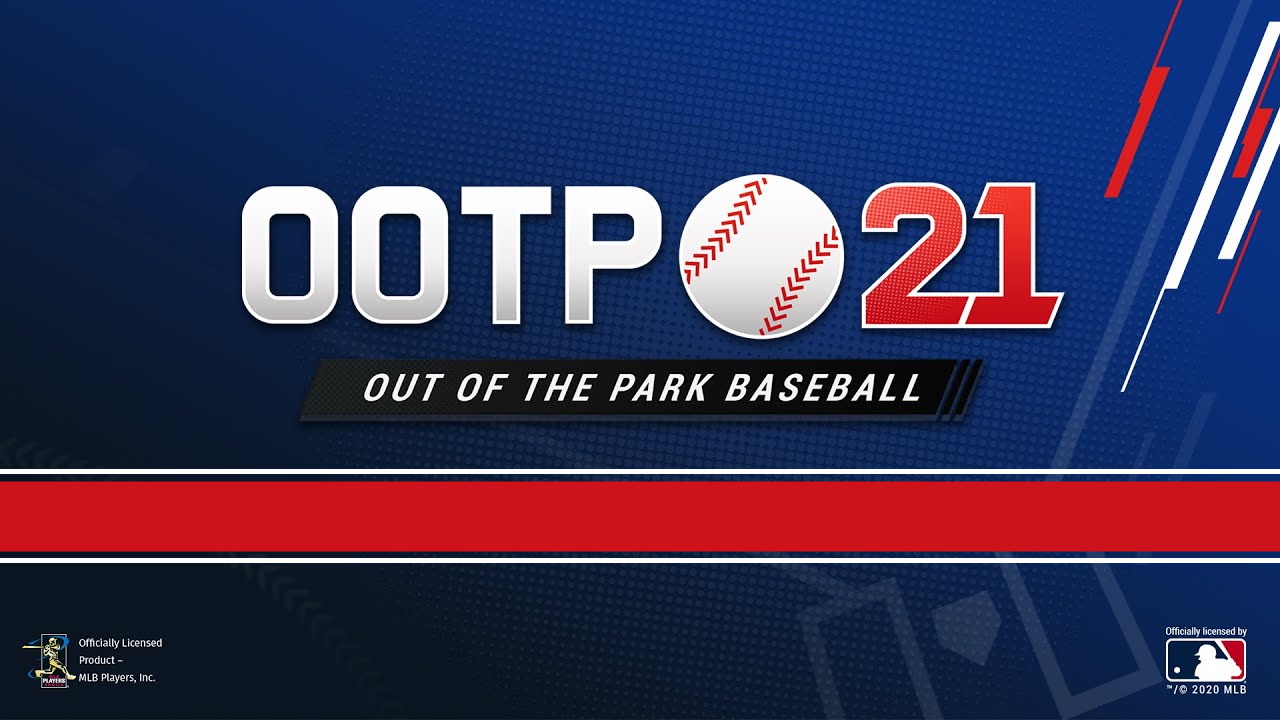 The Out of the Park Baseball series has been going strong now for over two decades, and while the series takes a different approach to video game baseball than say The Show, MLB 2K or MVP Baseball, it often meets or exceeds some of the most memorable standard controller-based games to hit PC or consoles over the years. Every year the developers find a way to implement new and meaningful upgrades and improvements, and OOTP ’21 is no different.

Listing gameplay as one my favorites for a baseball sim may seem strange, but it fits with the OOTP series, and this year’s version only enhances that idea. The new “game flow” works exactly as intended, and creates an intuitive user experience that even newcomers will be able to understand and use.

The improvements in the gameplay may seem minor to those of us who purchase the title every year. However, when you combine the new camera angles, ballpark ambiance, animations in the 3-D experience, and new abilities to break down scouting and drafting, the overall experience is deeper than ever. 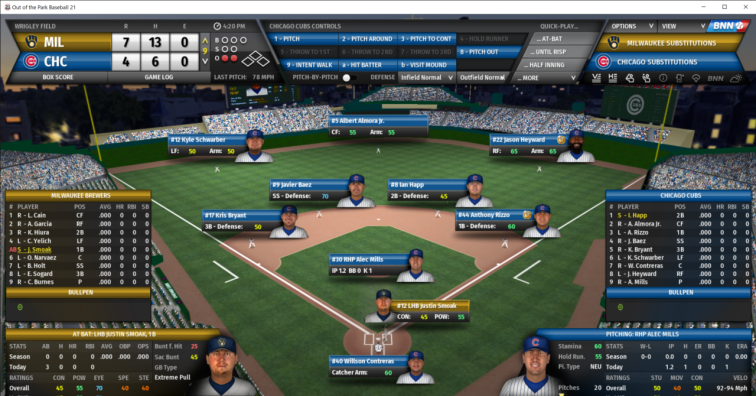 After spending an entire week with the game, all the new inclusions and upgrades make the game feel and play much smoother. This creates a streamlined experience. For those unfamiliar with OOTP, let me just tell you it is very easy to get lost in scouting for hours, or looking at potential trades and trying to find that perfect match and deal to upgrade the team.

Don’t let that scare you off either because all the information you could ever want is available at the click of a button, and it is a virtual rabbit-hole once the process is started.

It’s not just the scouting for potential trades or for the draft that can suck you in either. You also look at the talent pool in your system and other ball clubs to try and get the scope of things as well. The amount of depth that the game allows for, but does not require, is staggering and amazing. 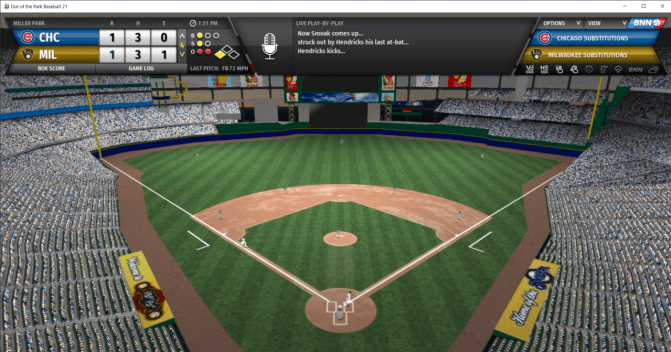 As for the game playing out itself, the OOTP series does an amazing job of allowing people to play how they want. You can choose to experience every single pitch of each game, or choose to sim each game and simply deal with the daily minutia of being a GM — and every choice in between. There is no right or wrong way to play, and I found my preferences changing each time I fired the game up.

New to the OOTP series with the latest iteration is 3D Ballpark Construction Kit 1.0. That’s right, this gives you the ability to create or modify your team’s stadium, or any ballpark for that matter. If you have played any of the more recent OOTP titles, then you understand how awesome the stadium mods are that help correct a current stadium, or in helping create an era of baseball from the past.

Before the new in-game creation and modification system was implemented, users have always had to rely on the ability of other more talented creators. Now, in four steps, you can easily do this yourself. Once you initiate the program, the game walks you through the process and gives you the option for the basic shape, field type, and whether it’s going to serve as a major or minor league ballpark. It then moves to a 3-D layout, batter’s eye, and visual decor options for the interior of the stadium.

What’s even more exciting is the fact that, according to Matt Arnold of the OOTP development team, “Right now it is essentially a standalone piece, but certainly down the road, the plan is to integrate it further within the game, with stuff like the owner saving up to help finance a new stadium, have the game generate the new 3-D park to use, and having that impact future attendance/fan loyalty/etc.”

Obviously this is the genesis of the stadium creator, but even at the infantile stage, it adds a whole new dimension to the game itself and is just flat out fun to use. 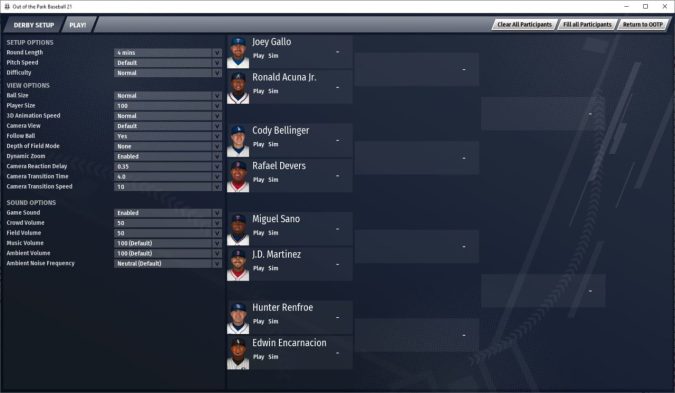 Card modes do very little for me in any game, but I will say that OOTP’s “Perfect Team” mode is designed in a way that makes it feel less like a chore than most, and offers quite a bit of excitement and replay factor to it. If you are not familiar with Perfect Team mode, it works much like others in the sense that you secure packs of cards, virtually rip them open and hope to see the talent come pouring out of those packs, both in the way of current MLB players and players from the past.

Want to build the best team possible? Start playing against others in hopes of getting promoted to the rookie pool, and that’s when you can enjoy a season’s worth of play in just one week. The more you play, the more “perfect points” you start to accumulate, and that’s what enables you to purchase more packs or visit the market to purchase individual players.

As with much of this game, the amount of customization in Perfect Team mode is, well, perfect. From team names to uniforms, and ballparks and lineups, the power and ability were in my hands from the start. The game allowed me to choose different paths in how I wanted to build my whole squad. This means I could use real-world money to instantly create a strong team in the field, or take my lumps and build it through simply playing the game.

If you are like me and it’s a struggle to get excited about card modes, or you’re a staunch fan of them, the OOTP ’21 Perfect Team mode does an excellent job of creating a simple format as a launching point for your virtual baseball organization.

This has been an issue ever since its original inception and continues to be so. It has shown signs of improvements on a yearly basis, and I know the developers take it extremely seriously. The problems arise when the on-field action fails to match up with the play-by-play text. This combination leads to the two elements feeling disjointed.

At times the action sequences that are played out on the field in 3-D mode are what I would describe as head-scratching, and I struggle to understand why the AI would do such a thing. For example, seeing outfielders taking bad approaches, holding onto the ball for too long, or making a throw to a cut-off man when the on-screen action clearly shows that a play could have been easily made at home hurt the game.

Do these types of illogical decisions happen enough to detract from the overall enjoyment of things? Not even close, but still a mention of the issue is warranted. As I mentioned before, the developers are well aware of these problems and are always working hard to have both the play-by-play and on-field action working as a single cohesive unit. But especially for newcomers to the series, you need to be aware that the 3-D interface is still a work-in-progress. 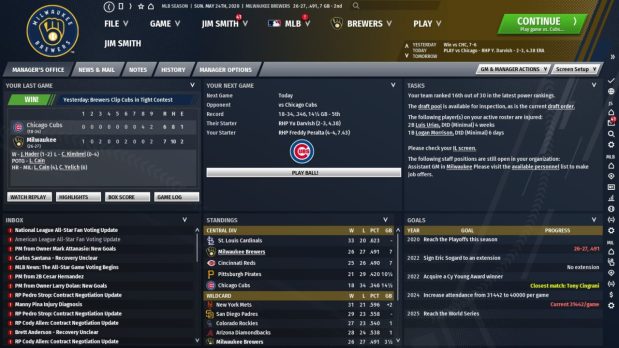 Having depth and options listed as things that concern me seems a bit odd, but the truth is the depth of options in this game are overwhelming. They have the potential to scare off newcomers from really settling in with the game. That being said, as I mentioned before, the game does a wonderful job of allowing players to hover with their mouse over the rules and on-screen options to see a small description of what each option and choice means.

The simplest approach to the oodles of information is take in one area or option at a time. Make yourself familiar with it, and then move on to the next. The developers and community have provided some awesome tutorials and breakdowns on how everything works and flows together. These tutorials can be found in the forums of OOTP or on YouTube with a simple and specific search.

I fully understand that sports sims are not for everybody, and without a PC the full experience of the OOTP series is impossible to enjoy. Without question though, if you have a PC that can handle OOTP, then this is a title you should scope out. Rarely do I write something is a “must own” game, but I would put OOTP ’21 in that category for all baseball fans and all sports sim fans. Even if you are just thinking of diving into sports simulation for the first time, you can do no better than starting with the newest edition of this wonderful series. While it might be a huge leap into an unknown world, the payoff is worth it.