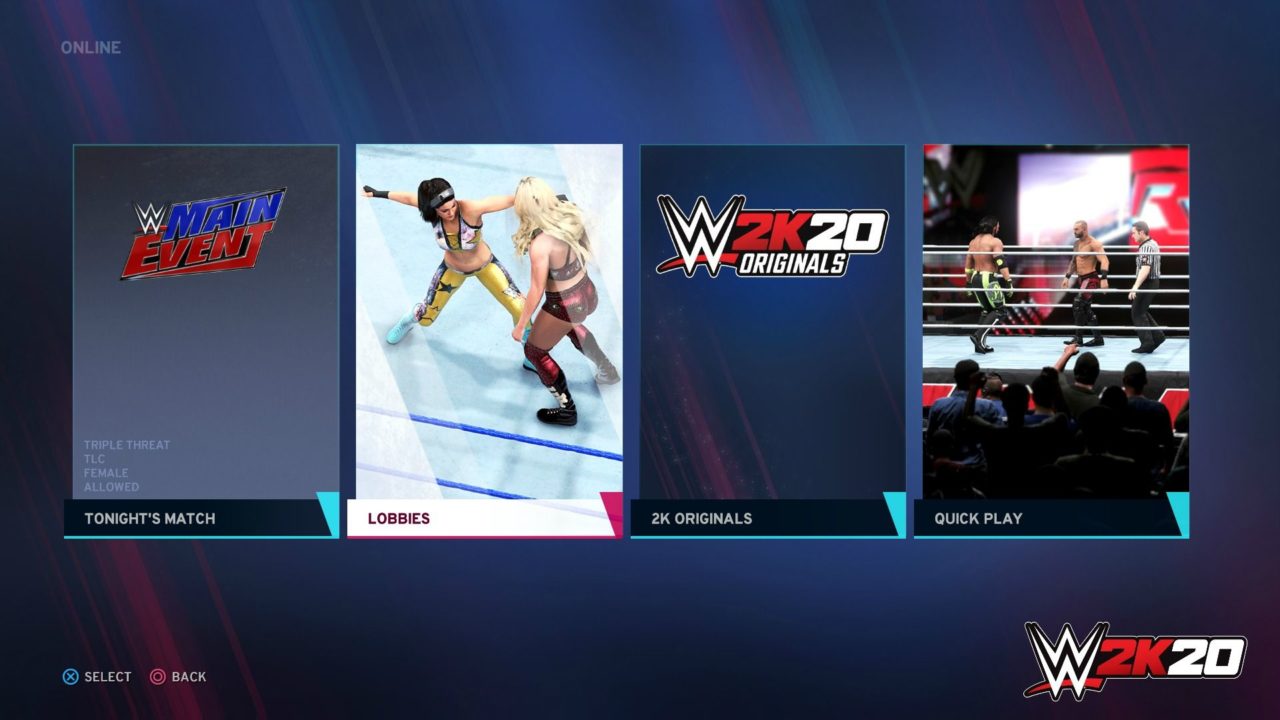 2K has announced online lobbies will make a return in WWE 2K20, allowing fans to create a match online and invite friends, then open the remaining slots up to the public. They also revealed some new developments in MyPLAYER, Road to Glory, and MyPLAYER Towers.

If you have an exact online multiplayer match in mind, creating a lobby is the way to go. Select from a wide variety of match types and rules with up to six players. Choose the arena, Superstar gender, and even toggle the restriction to only allow default WWE Superstars (a.k.a. Fair Play). You can start out in private mode to invite friends and then open the remaining slots to the general public if you prefer. Once in a lobby together, everyone can voice chat as they select Superstars and the lobby creator makes decisions on the match at hand. Players will now have full visibility on how the match is coming together.

If you’re less picky about what kind of match you want to play, you can browse currently available lobbies that only need one or two more participants and jump right in. Or use the search feature to filter by preference. Even easier, select Quick Play to be slotted into ready-to-go matches automatically. 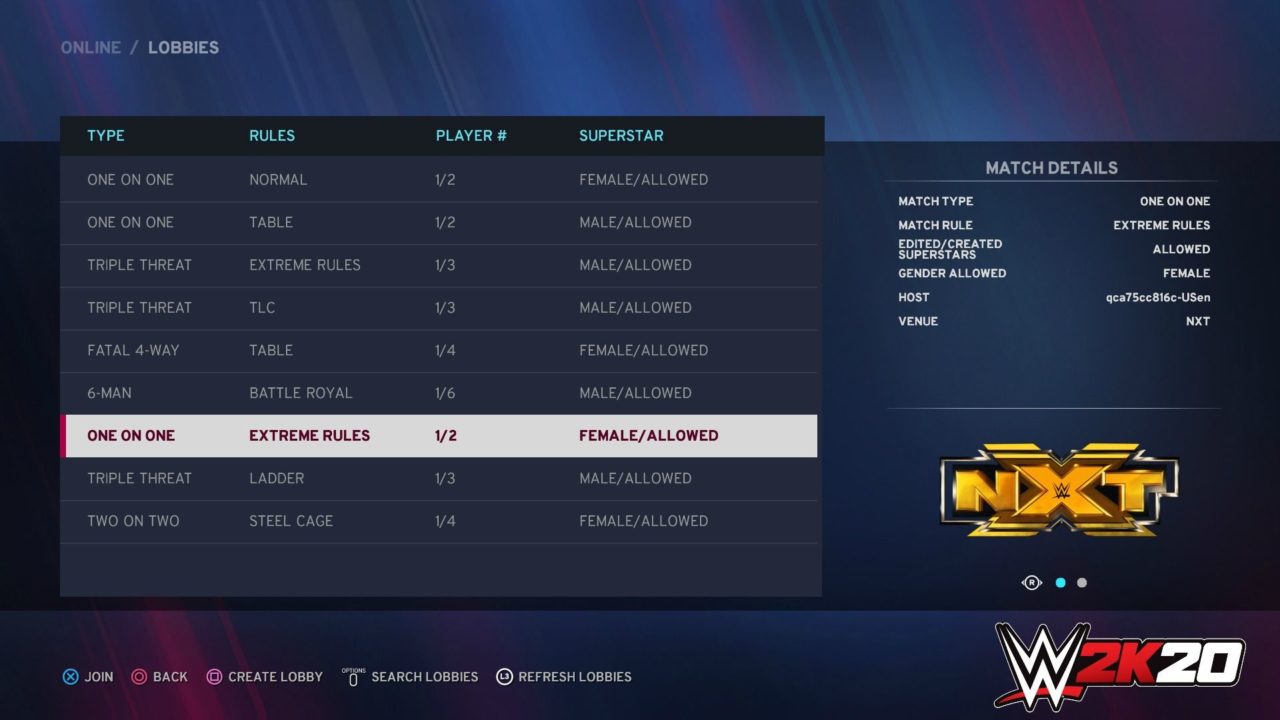 As previously announced, both male and female MyPLAYERS are part of MyCAREER. This extends to Road to Glory and MyPLAYER Towers as well. You create both male and female MyPLAYERs with different styles (one can be a brawler and the other a high-flier, for example), experience pools, progression trees, and creation part unlocks. This consistent pair can level up and unlock items throughout all three of these modes.

For the first time ever, any special creation parts you unlock through playing MyCAREER, Road to Glory, and MyPLAYER Towers are also available in the general Create-a-Superstar mode. On top of that, you can export the appearance of your MyPLAYER out to the general character creations as well!

Road to Glory and MyPLAYER Tower fans will be familiar with the process of earning stars to enter special pay-per-view events. These Road to Glory events now include female matches for the first time, in addition to male matches. 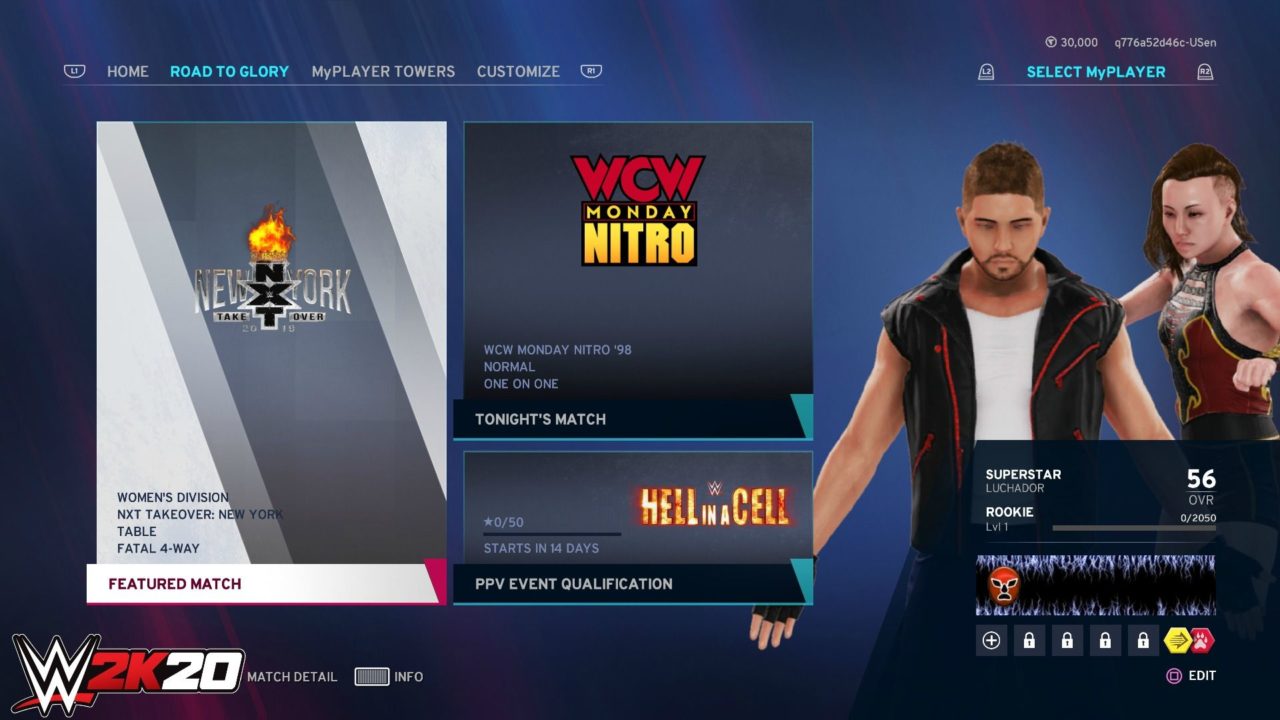 The new Tonight’s Match feature in Multiplayer places you in a new match every day that rotates through match types, rules, genders, and arenas to make it simple to constantly try something new.

The Road to Glory Featured Match of the day is similar to Tonight’s Match, but also includes potential Triple Threat, Fatal 4-Way, and 6-Man (or woman) matches. These will regularly toggle back and forth between male and female matches so both of your MyPLAYERs will get regular rotation.

Tonight’s Match, Road to Glory Featured Matches, and daily MyPLAYER Tower challenges (single player) will all incorporate elements from the new WWE 2K20 2K Originals post-launch downloadable content*, whether you’ve purchased them or not. For example, once the first package, WWE 2K20 Originals: Bump in the Night, releases, you may see matches taking place in the Wyatt Swamp Arena or Cemetery Brawl Arena. Or you might face FrankenStrowman one day in a MyPLAYER Tower daily challenge. You never know what kind of 2K Originals content might show up any given day for all players with online multiplayer access to enjoy.