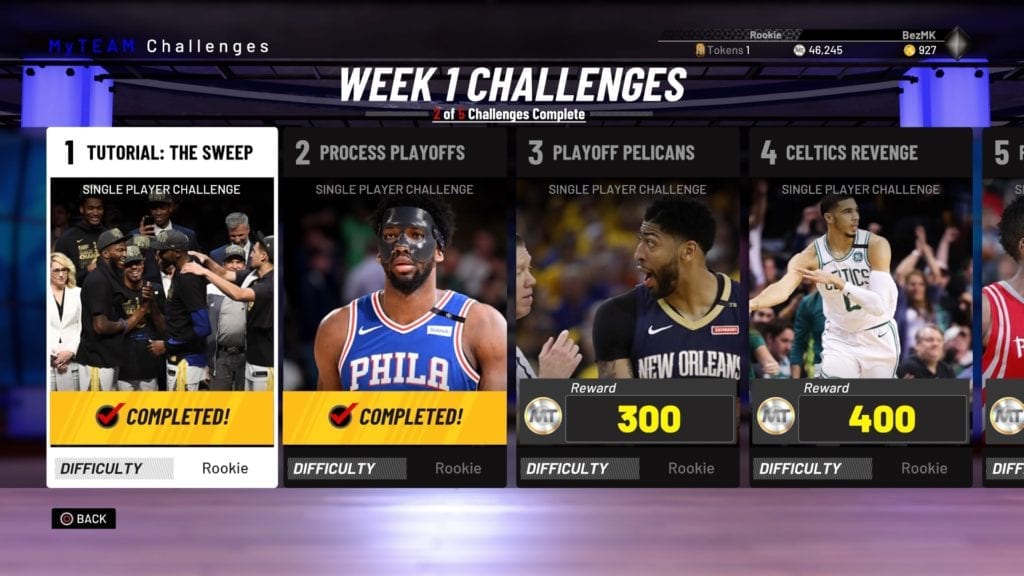 NBA 2K19 has been out for a little over a week (or more, depending on which version you purchased) and people are starting to get a feel for this year’s release. Now that everyone has had some time with the game, let’s take a look at the pros and cons of each of the major game modes.

In other words, the overall gameplay experience. I’m not counting this as a game mode, but its importance cannot be disputed as nothing else in the game matters if the gameplay is trash. And I’m happy to report that the gameplay is not trash.

Rather, it’s great. We can and will quibble over the game modes themselves and whether any major changes are needed, but the gameplay itself remains solid. But even though I’m not counting this as a game mode, I did want to highlight two positive gameplay changes in 2K19:

Improved defense: It’s no secret that it was far too easy to blow by your defender in 2K18. And I’m not talking about Westbrook driving around Boban. I’m talking about Jared Dudley going by LeBron with relative ease. That isn’t the case anymore. During our initial impressions roundtable, I suggested that perhaps the pendulum had swung too far in the other direction. But as I expected, that’s tamed down quite a bit as I’ve spent more time with the game. This year, it feels just right.

Shot feedback: Not the meter itself, but how each shot is now scored, so to speak. Last year’s release featured a lot of shots where the feedback said you were contested when there wasn’t anyone close enough to contest, or smothered when there was only a light contest. It feels much more accurate this year based on the space between the defender and the shooter. 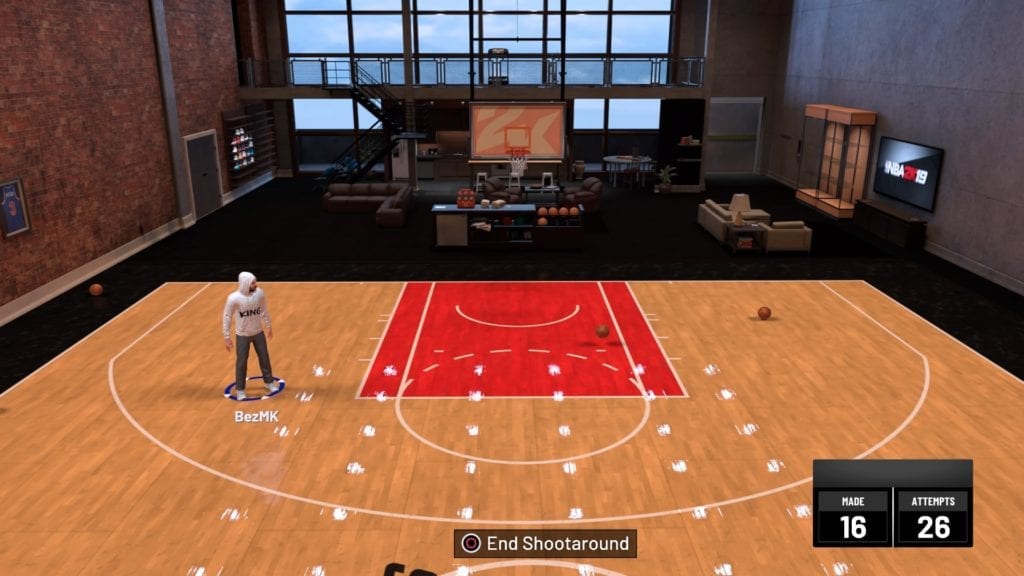 A better designed Neighborhood: As fun as it was last year, it took a while to get familiar with where everything was. And even after you did, it could be very cumbersome to get around. This year, the Neighborhood has a square layout so it’s much easier to memorize everything’s location. The result is more time spent actually playing the game instead of walking around trying to find a specific building or area.

The realism: The Neighborhood is a revolutionary concept and, despite its flaws, is very impressive. Even if each area isn’t perfect, the totality of everything that is included here is astounding. To that end, there is a true sense of realism that kicks in while walking around the Neighborhood and interacting with other 2K players. It almost feels like its own separate game that could exist on its own. And this year’s version is even better than last year’s.

Servers: Always the servers. I understand that I won’t necessarily be able to jump in and start a Park game instantly, but I do spend a less-than-ideal amount of time simply standing around waiting for a game to finish and/or teammates to join. This often leads to me giving up and trying something else in the Neighborhood, or even another game mode altogether. Side note: what is the point of not being able to back out of the Jordan Rec League once you enter? If the wait for a game to start is too long, you can’t just back out like you would do anywhere else. You have to force quit the entire game and start over. It’s frustrating and doesn’t make much sense.

Microtransactions: We all remember the haircut debacle from last year. To their credit, 2K admitted they made a mistake and expressed regret that it ever happened, and haircuts are indeed free this year. But we all know that the microtransaction issue isn’t limited to haircuts. They aren’t some niche part of the mode. They play an integral role in the development of your character and how competitive you are against the rest of the 2K world. To be fair, some stuff is more reasonably priced, like sneakers and throwback jerseys. But it’s painfully obvious after you play for a while that the most fun to be had is locked behind a paywall.

3-on-3: This addition feels like a breath of fresh air to MyTeam. If you’ve never tried MyTeam at all, or even if you’re just on a hiatus from the mode, I suggest you give it a go. Instead of full-court action, it features Park-style halfcourt basketball. You can play offline against the computer’s best three-man squads or you can take your cards online, earning MT and VC along the way. I’ve never been a huge fan of MyTeam, but this year feels different enough that I see myself sticking with it for the time being. I’m not sure whether that will hold long term, but 3-on-3 is engaging enough on its own to keep me interested in seeing what type of squad I can build.

Better cards right off the bat: It feels somewhat easier to quickly build an interesting squad — not a dominant one, of course. Creating an epic team is going to take a lot of time and an equal amount of luck, or cash. I haven’t been able to spend a ton of time with the mode, but even in my limited time so far I have a decent team that’s fun to play with. I don’t have anyone rated over an 85 or so, but in past years it felt like you spent way too much time fielding a team of high 60s and low 70s players. To be fair, I did pre-order the deluxe version, which spotted me a decent LeBron and Giannis card, along with some weekly packs. But with new token rewards introduced this year, I’ve landed some fun throwback players like Mo Pete. Mixing him with Bron, Giannis and Gary Harris has provided much more entertainment value right away, instead of having to grind for weeks to get some halfway decent cards. 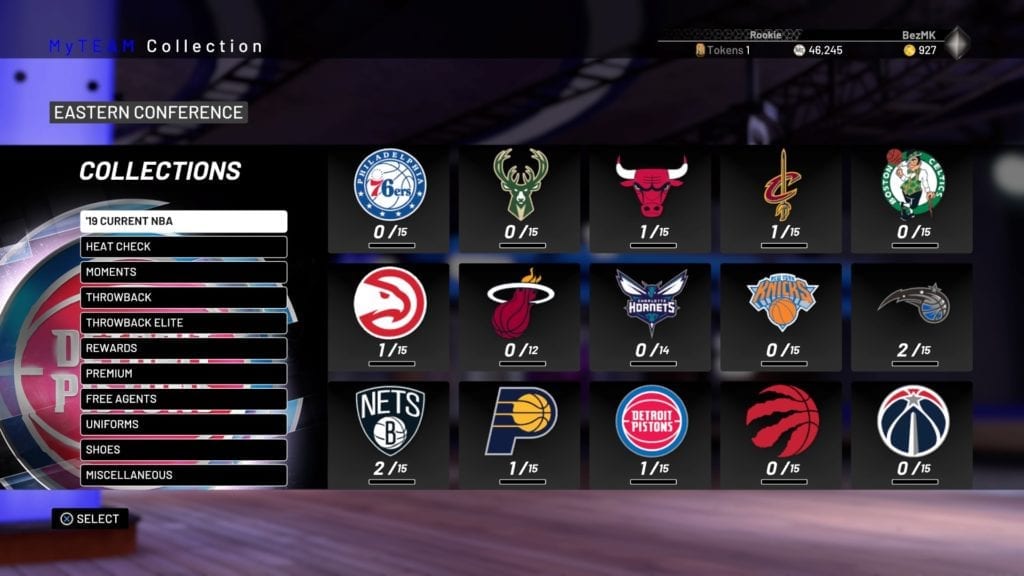 Microtransactions (again): Even though 2K did a much better this year of giving you more to work with up front, the pay-to-play nature of this mode makes you feel like unless you’re dropping a lot of cash, you’ll never have squads as good as those you encounter online. It’s still fun to play without spending a dime of real money, but there’s always this feeling that you’re missing out on the best part.

It takes too long to earn enough points to buy packs: I suppose this is an extension of the microtransactions section, but it’s frustrating to grind for a while only to barely scrape up enough points to buy the cheapest pack and then landing nothing more than a high-60s player. It’s very deflating.

Sliders: In the way that gameplay sliders completely changed the way we thought about basketball games, these MyLeague sliders have the potential to do the same with franchise modes. The amount of control you have is staggering, so it would be impossible to give an accurate picture of how well everything does or doesn’t work so soon after the release date. But you can finally adjust things like the salary range for specific types of players, how much teams value things like draft picks and young players as opposed to proven veterans, the degree to which players decline at a certain age, and so much more. You might even want to set it up so that vertical and quickness decline at a certain rate once a player starts to regress, but their mid-range shooting ability slightly increases. This level of customization is exactly what MyLeague needed and it’s great to see it included this year.

The overall level of detail: This year brings even more features that make the game feel even closer to the real thing, such as the inclusion of trade exceptions and the ability to trade draft picks five years out just like in the real NBA. The revamped All-Star game is also included. There isn’t another console sports game around that comes close to the level of depth within NBA 2K’s MyLeague.

It’s starting to feel a tad stale: As fun and deep as this mode is, it could use a fresh coat of paint. It’s not that it’s hard to navigate or anything like that, but the cosmetic changes have been few and far between and, as a result, despite all of the changes made each year it does start to feel old and tired after a while.

Free agency lags behind the rest of the mode: As realistic as MyLeague is, free agency falls just a bit short in terms of replicating the real NBA. You never really get a sense that you’re competing with other teams to sign prized free agents. After a few seasons, it starts to feel very cold and formulaic. NBA free agency is the best free agency in all of pro sports, but you don’t really get a sense of that when you play 2K. It feels like just another step to complete in the offseason.