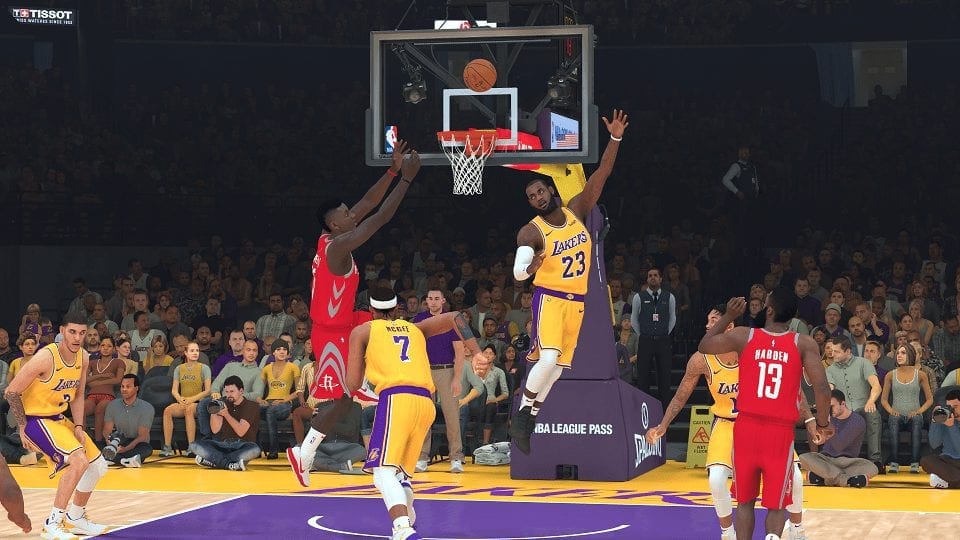 Recently, NBA 2K has quietly made changes to its game designed to appeal to the simulation part of its customer base. Up until now, most team playbooks have been roughly similar. All of them have had a mix of pick and roll, three pointer, high and low post, cutter and isolation plays. The design premise was to give users a broad choice of plays to run their team’s offense as they see fit. A result was that teams controlled by the AI in 5-on-5 modes were also constrained by these general playbooks and did not truly resemble their real-life counterparts.

AI producer Da Czar has drastically altered the playbooks of three teams, the Rockets, Spurs and Lakers, to more closely reflect the types of plays these teams actually run. The changes are substantial and alter both the number of plays and the types of plays in each team’s playbook.

The current Houston playbook only contains 21 plays. Every other current team contains close to the allowed limit of 50 plays. Of their 21 plays, 12 are pick and rolls where a ball handler uses a high ball screen. Another five are reserved for isolations for when Harden or Paul detect a mismatch. The distilled simplicity of their offense has been re-created in NBA 2K. The real-life Rockets offense lacks the complexity of Golden State. It doesn’t send defenders through a maze of screens and misdirection and precision cuts. They set their ball handler up with a high screen, and James Harden or Chris Paul make reads on what the defense does. The current NBA 2K playbook reflects this.

Much is included but what is missing from this playbook by design? They have no post up plays. Either down low or up high. Their philosophical objection to the mid-range two has been implemented. Although, this is the case for most teams. Their new playbook has no guard post ups or hand-offs. Mike D’Antoni has claimed he’d be comfortable if his team shot 70 3s a game, but they rarely run plays designed to get threes like the Warriors do. Their long-range gunning is a result of drive and kick from Paul or Harden breaking down the defense in pick and roll. So Czar has only given them two plays designed to create a 3-point shot. This is a playbook with specifically scouted plays designed to resemble how the real Houston Rockets play.

Similarly, he has re-created the specificity of the Los Angeles and San Antonio offenses. The Spurs get post ups for LaMarcus Aldridge and DeMar DeRozan, while the Lakers can direct their offense through the spots LeBron wants.

Simulation NBA 2K gamers will be broadly supportive of this. Teams will more closely resemble themselves. But there is potential to alienate some users.

The Dangers of Change

In Play Now Online games, users of these teams who utilize playbooks will have to play as the AI designer intends them to. A post scorer in Pro-Am keen for some 5-on-5 action with Houston will struggle to adapt if they aren’t willing to change their style.

Secondly, these changes may require a user to develop a skill set necessary to play the intended style. When you’re playing spread pick and roll with James Harden, you need to know how to use the skip pass mechanic to get the ball over the first rotation to the corner shooter. If nothing opens up from the first pick and roll, the user may need to manually call a pick and roll. If the defense is playing for the roll, they will need to pop the screener. Or if the defense is loaded on one side, the user will need to know how to flip a pick and roll. Is the casual user familiar with these controls?

The AI engineers of NBA 2K are renowned for their commitment to bringing complex basketball concepts to this video game. This is another step in that direction. A much larger step may be taken for NBA 2K20. Will all teams have a playbook designed around their style and personnel? That would entail a mountain of work for the design team. Would that even be a wise move, considering the constant movement of players between teams and adjustment of styles? A phenom like Zion Williamson could force a team to reconsider a style they were wedded to. Whatever decisions are made, these changes represent the continued commitment of the 2K design team to simulation basketball.

Below are some series and play highlights from a CPU Houston and San Antonio game to see how the new system looks: