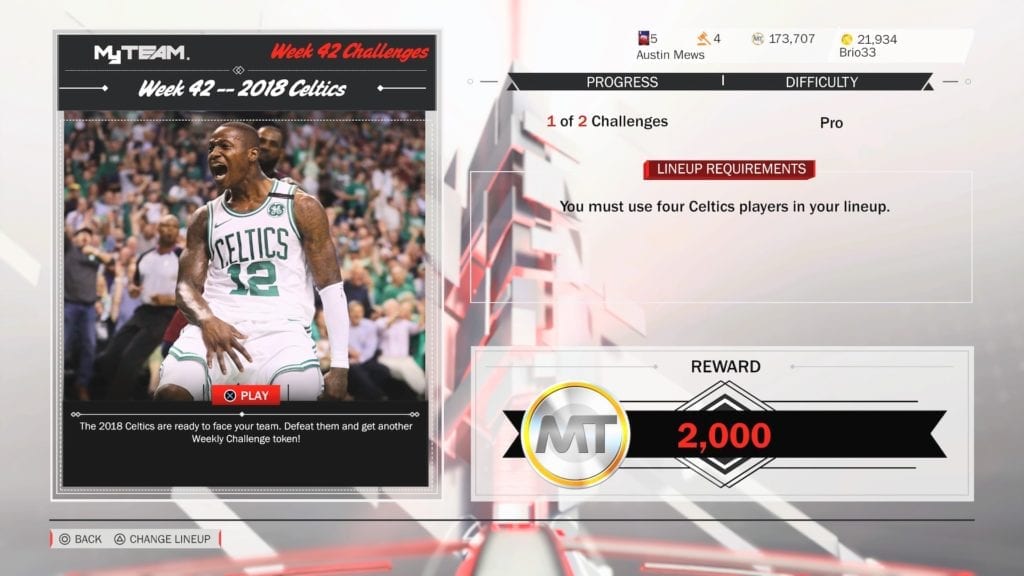 I’ve discussed challenges a little already, and the main takeaway from those conversations can be summed up with just one word:

Obviously more challenges, of both the Weekly and Moments variety. But they need to come with more cards and more MT. For example, when James Harden got his first pink diamond card back in January, how about giving us a Challenge:

If you want to put it in packs later on, fine, but give us a chance to actually earn something amazing playing the game. Here’s another one, free of charge:

Using sapphire players or lower, and at least four Celtics, beat the All-Time Celtics to earn 1,700MT (the 17 honors their 17 NBA Championships) plus one random card from that amazing squad.

Plus I’m going to suggest a new tier of challenge, which I’ll call “Franchise Challenges.” Let’s say a team has 10 of these, and they are basically gameplay-centric history lessons for each franchise. New games for each team could unlock weekly, or even monthly, so we aren’t earning the biggest rewards up front. It would just be nice to have more content to look forward to throughout the year.

Wouldn’t it be interesting to actually learn something from a video game?

I’ve mentioned before that one of my favorite aspects of NBA 2K is getting to use cards for players I’m not familiar with. Then when I inevitably fall in love with some of those players, I watch highlights and learn everything I can about them. It’s just an awesome way to further my connection with basketball, and I appreciate 2K for providing that opportunity.

What about you? Are there any challenges (historic or otherwise) that you’d like to play through? Or what do you think are reasonable rewards for the time you put into MyTeam?