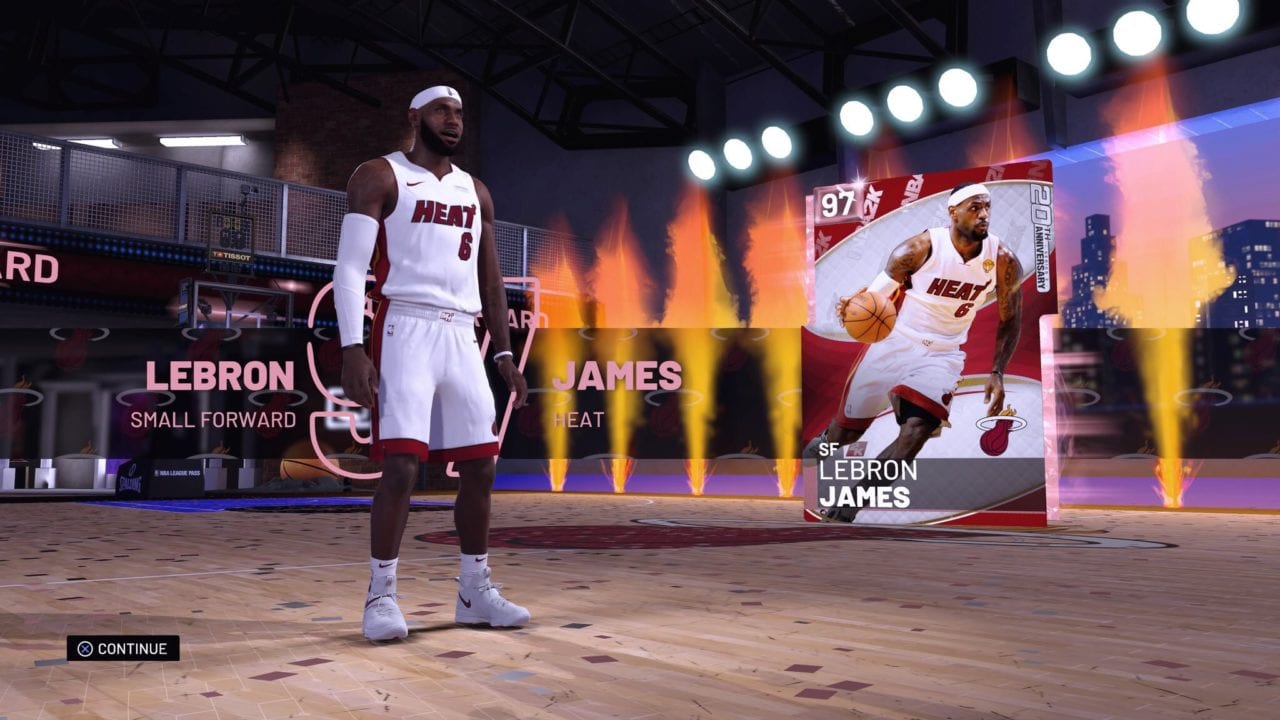 All hail the king.

Pink diamond LeBron James is the playmaking wing I have been waiting for (hall of fame dimer!), and I wanted him desperately. How desperately? Well, I opened three 20-pack boxes, two 10-pack boxes, and a handful of single packs. Here’s what I got for my trouble:

So no, that LeBron from the cover image to this article isn’t mine, rather it’s from a luckier person than me via Twitter. I faked you out, sucker!

Wait, don’t leave — I’m kidding, of course. Obviously, I’m the sucker for essentially spending $150 to get about 35K MT worth of stuff. Ouch.

Now, I’ve kept the diamond Kawhi, and I actually can 100 percent recommend The Claw’s new card — mainly because he’s just so cheap for what is one of the best defensive cards in the game. He’s 6-foot-7, has a huge wingspan with huge hands, and has hall of fame Defensive Stopper, Pick Pocket and Mid-Range Deadeye. Impressive.

But yeah, I could have just bought him straight up for cheap and saved myself a lot of grief. 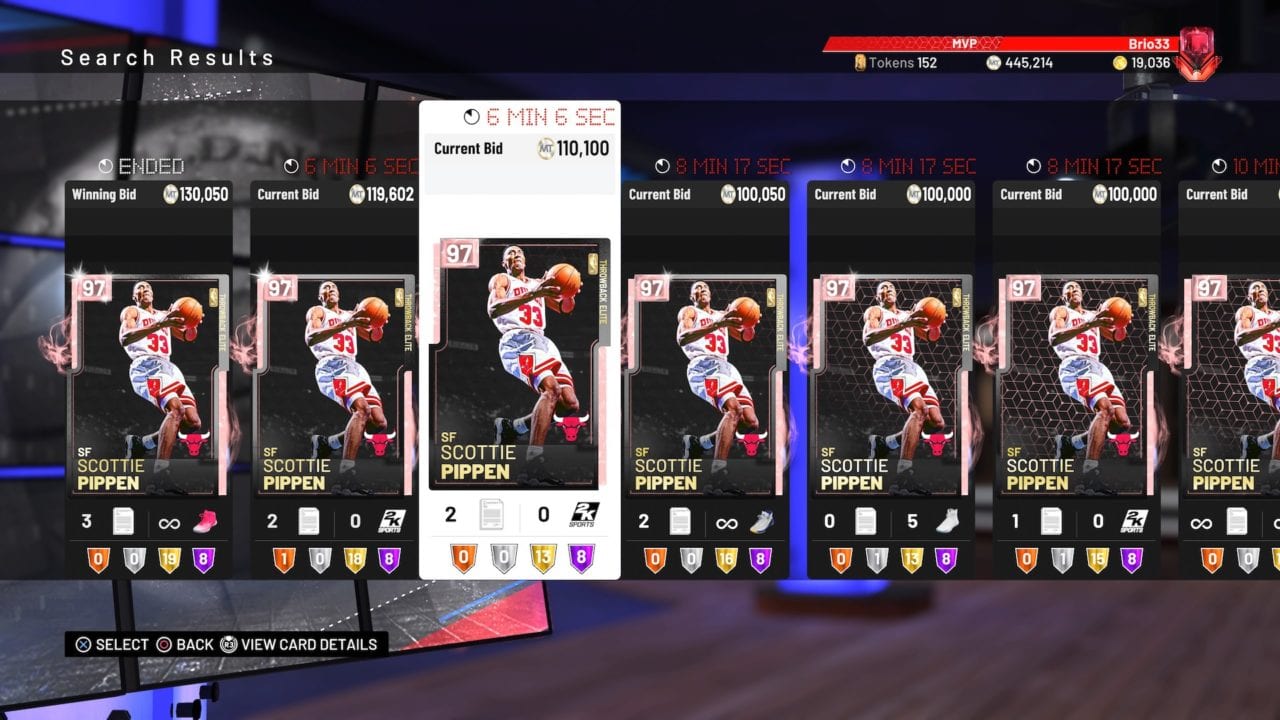 I could have even probably sniped this pink diamond Pippen that came along with LeBron. He’s going for roughly 120-130K MT right now, which is a great price, actually. But at the time I bought all those packs, I conned myself into thinking, “Yes, pulling pink diamond LeBron is definitely a long shot, but I surely will at least pack a Pippen for $150, right?”

I know what you’re thinking.

“Just stop spending real money on packs and boxes, dummy. I have no sympathy for someone that silly.”

The voice inside my head 100 percent agrees with you. But the gambler/endorphin junkie doesn’t. “One more pack…” right? But let’s not go down that road again. Let’s instead focus on my next mistake. 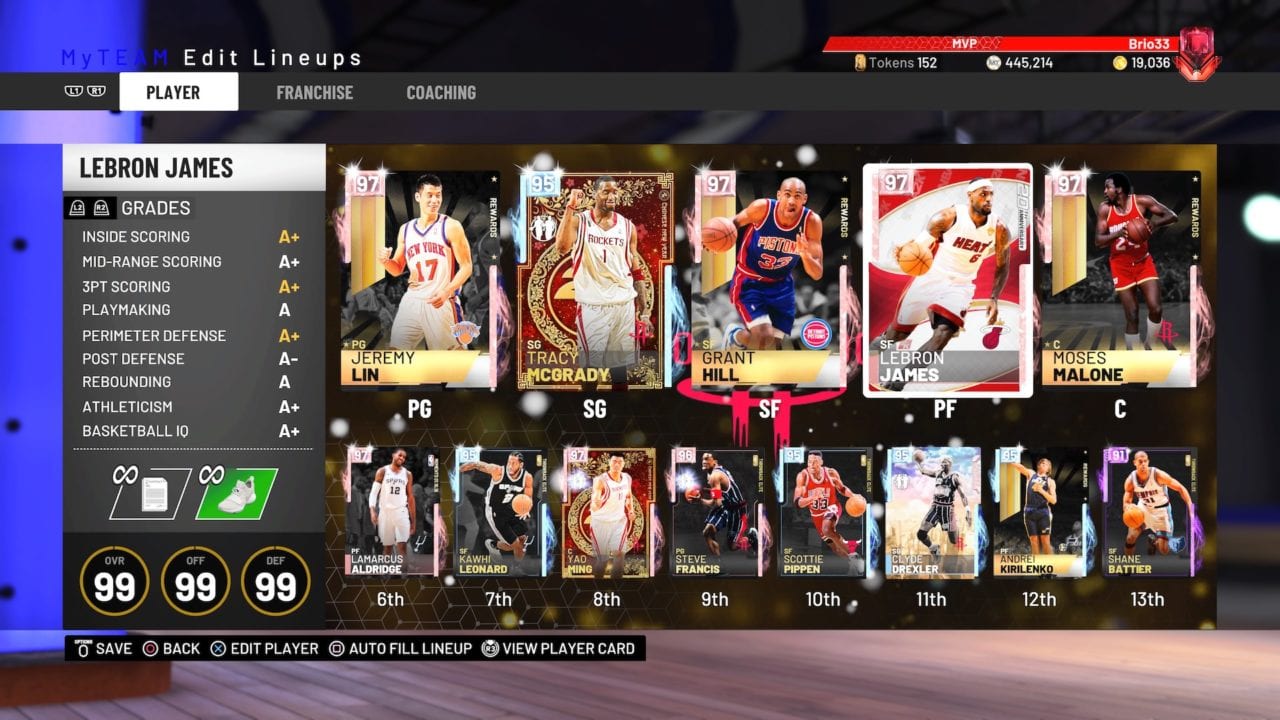 Yes, I spent more than half of my hard-earned MT savings to rage-buy a LeBron on the auction house for 550K that same night. At the time, I thought it was a good investment because surely he’ll go up, higher than Giannis even…

He’s settling for about 350K as of right now, and I think it’s safe to say that is all Carmelo’s fault.

Once LeBron expired, 2K dropped an insane “Madness” set with a ton of great cards.

Most of them also have insane hall of fame shooting badges. For example, there’s a freaking pink diamond Jimmer Fredette with 10 freaking HOF badges, including catch and — no, wait, I’m not going to type all of that out. Here’s a picture: 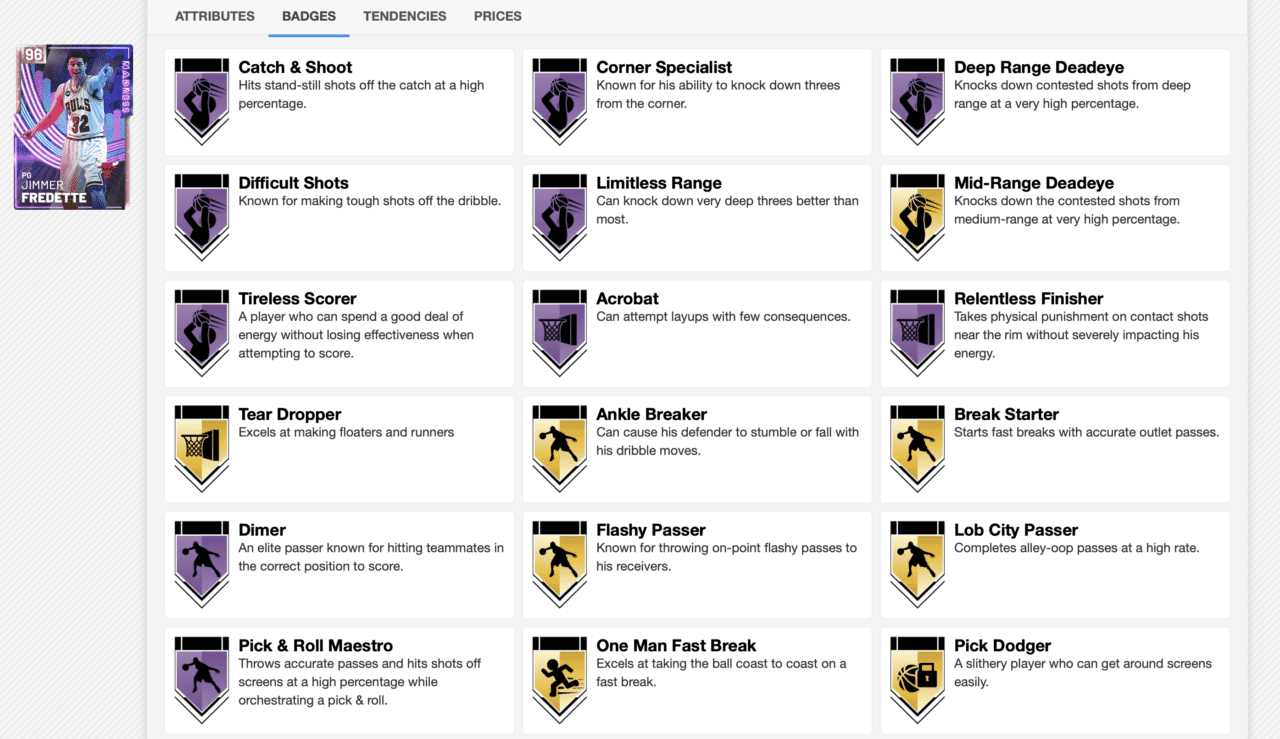 The gem of the set isn’t the Oscar Robertson reward card, either. It’s definitely Melo. He actually has two fewer HOF badges than Jimmer, but the badges he does have are pretty awesome. 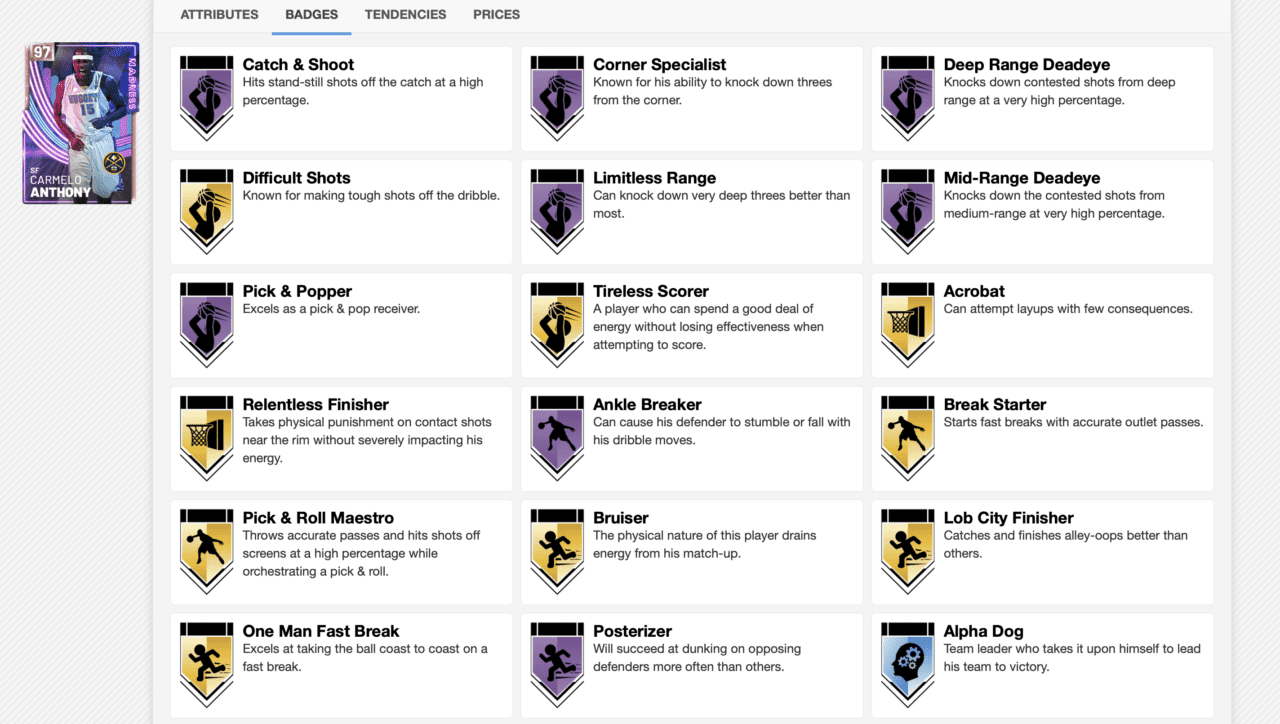 So basically any older cards we have are currently obsolete, or will be very soon. I mean they just dropped a Throwback Elite amethyst Bobby Jones with four hall of fame defensive badges. It’s all downhill from here folks. 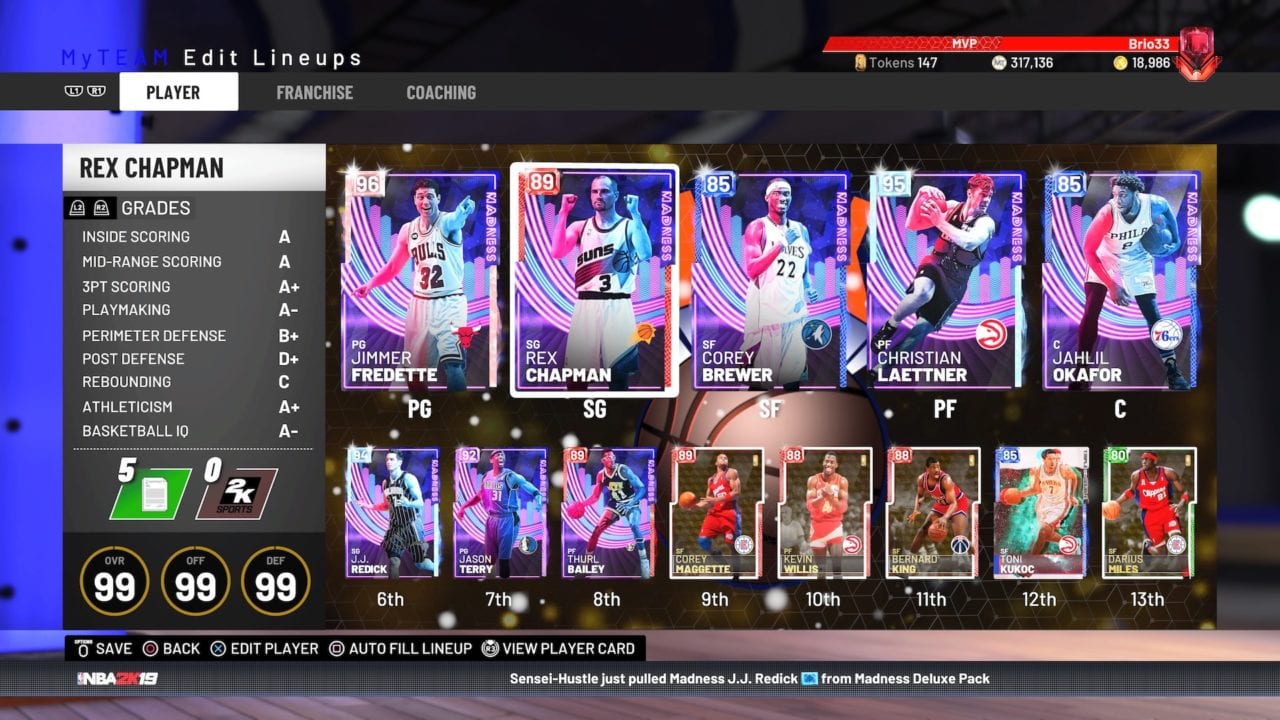 I’ve sniped, tried out and flipped most of the cards from the Madness set already (except Melo, who is still 600K or more MT), and I’ve been impressed across the board.

Even the cheaper cards like diamond Laettner and J.J. Redick are pretty amazing. Plus, I personally love Jay Williams — his amethyst has two HOF badges and can shoot the lights out. Oh, and there’s a ruby (RUBY!) Rex Chapman with HOF posterizer. Budget ballers should be thrilled. 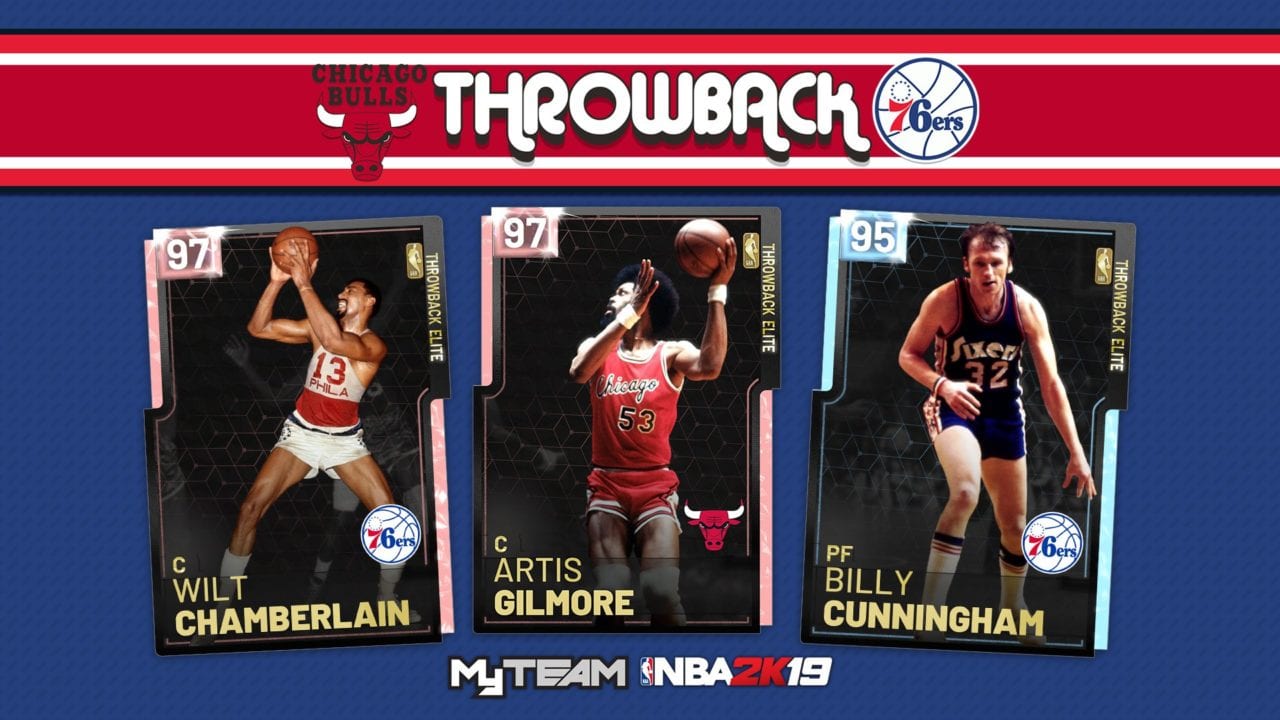 If you are keeping up with throwback cards, you’re probably just as tired as I am of centers and short power forwards.

The badges are great now, sure, but I can think of a ton of better Bulls/76ers players I’d rather see. How about pink diamond Toni Kukoc? Or maybe something crazy like a pink diamond Michael Carter-Williams to combat the Magics and Oscars of the world? I will say that I do really like — no, love — the diamond Bob Love card.

Bob’s reward card last year was awesome, despite his height, but the stretch four potential is high. I am also a fan of his shot release, much more so than Kevin Love or Laettner. To each his own, though. 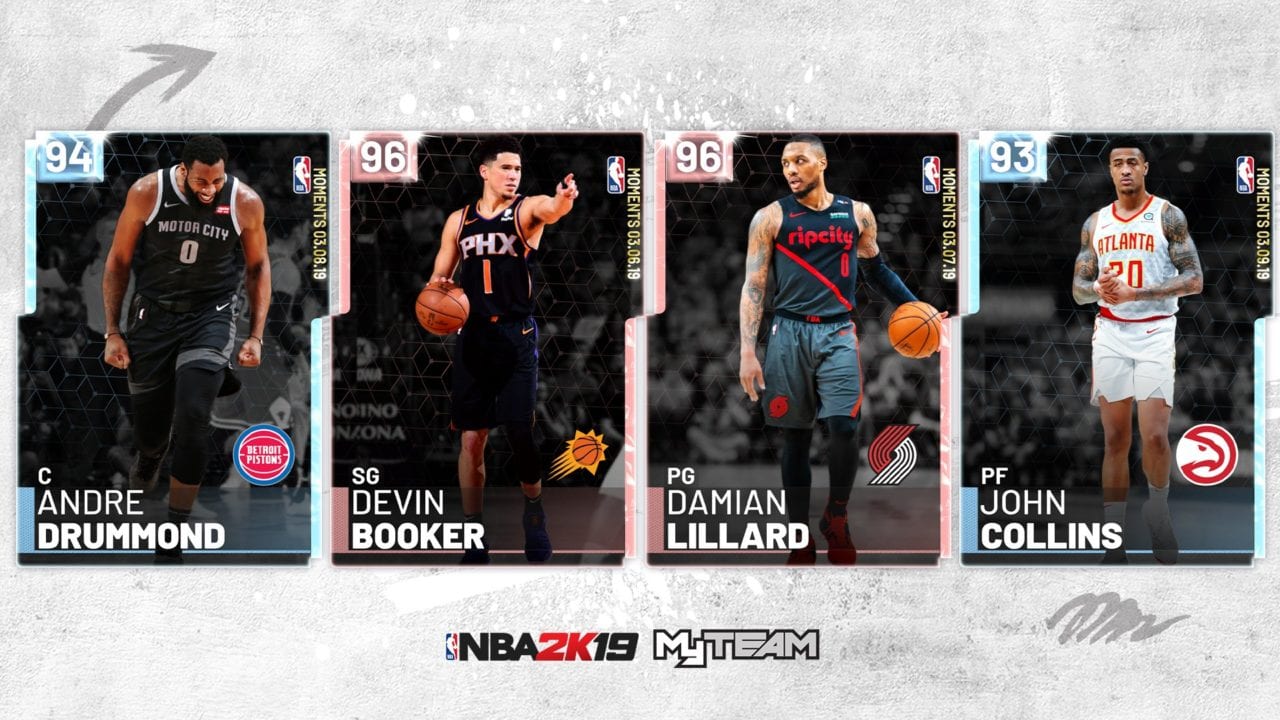 Finally, Moments card fans have had a lot to be excited about. The long-awaited Lillard Moments drop has happened. Too bad we just got that awesome diamond card a couple of weeks ago, but better late than never. His cards are always fun to play with in 2K.

There was also the recent pink diamond trifecta of Zach LaVine, Trae Young and Donovan Mitchell. I haven’t had a chance to try any of these cards out yet, but I loved the pink diamond Mitchell from last year. He’s undersized, but wow could he attack the basket with style and power. I’ll probably try him out as his price drops soon. Most of these are already BIN, actually. Just be careful, as more powerful content drops, the window for flipping cards shrinks. Or, in some cases, is non-existent.

That being said, I can’t wait to see the next set, which presumably will be either 20th Anniversary Bird or Durant. My money is on Bird. (St. Patrick’s Day is just around the corner). Then it’d be great to get a pink diamond McHale too (fingers crossed), or maybe they’ll throw out the pink diamond Drexler they forgot during the historic Blazers set. [Ed. note: this was written prior to the Larry Bird announcement, Brian was right on the money.]

As a side note, it does seem weird to drop a pink diamond Pippen with LeBron, when a week later you release a Bulls throwback set that could use an amazing Elite card like Pippen. 2K never ceases to amaze.

My plan is to eventually sell LeBron, hopefully closer to a break-even price, and go after Bird. I usually end up with Larry’s best card in my final lineup, and I think it’s safe to say we’re getting closer to that time of year. I wouldn’t even be surprised to see the first Galaxy Opal in packs sometime over the next couple of weeks.