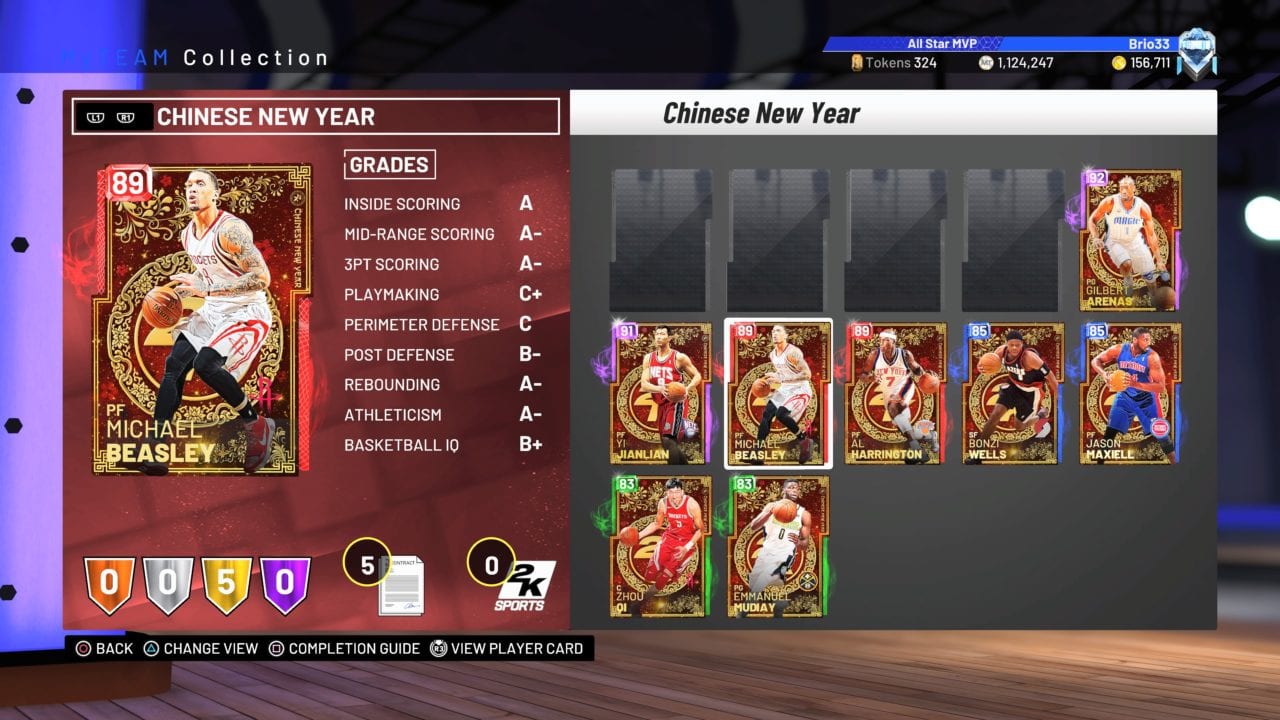 All-Star week is upon us, and I’ve made an effort to tighten up my team and prepare myself for the upcoming insanity. First I had to narrow down and sell the army of amethysts I acquired a couple of weeks ago. 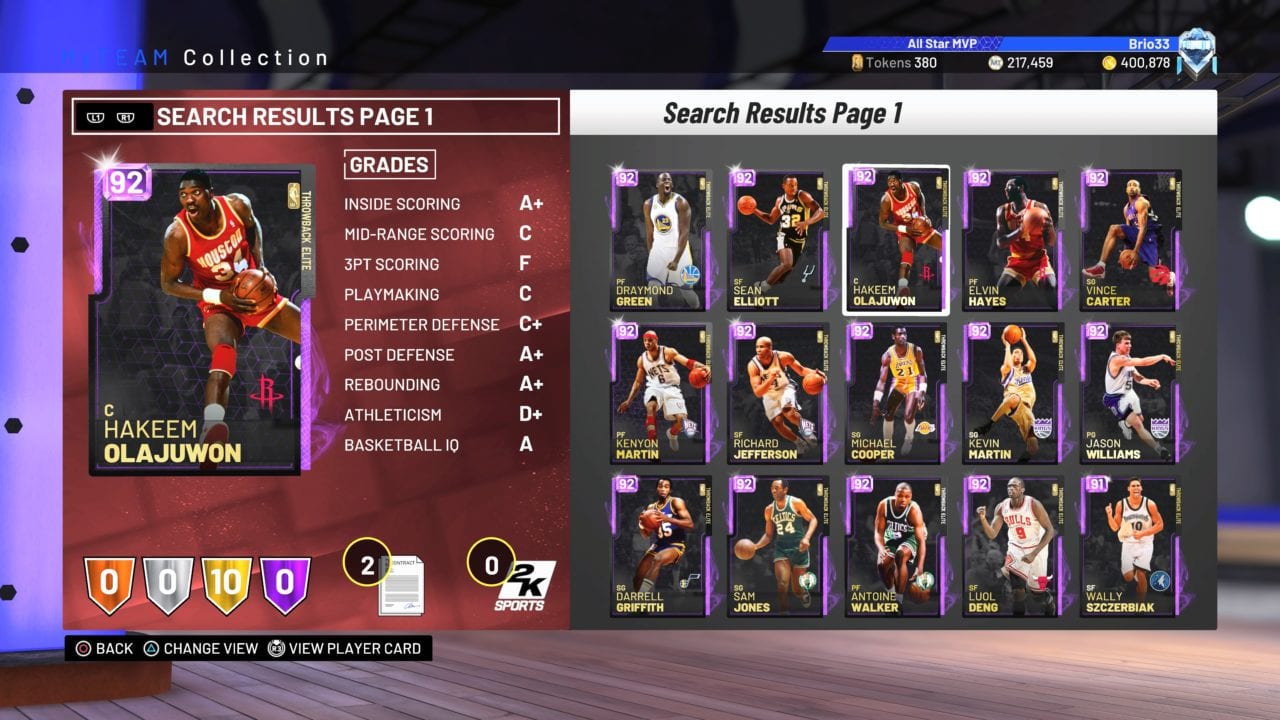 I narrowed it down by ranking the amethysts and making cuts where needed, so here is a quick list of my favorites sorted by position.

PG: Sam Jones is technically a shooting guard, but he’s still a great ball handler, and my coach boost gives him a 99 open shot three. I also have to mention Jason Williams as his hall of fame Flashy Passer badge makes him supremely fun to run with game to game.

SG: If you want 3 and D, Michael Cooper is your man. If you want instant offense, Vince Carter and his hall of fame Posterizer badge are insane. Whoops, I meant Vinsane. I also personally love Darrell Griffith, and sometimes run him at the point. Oh yeah, and Kevin Martin is a sharpshooting assassin. Basically there’s a cornucopia of great amethyst guards out there right now, so stock up and try them all.

SF: Sean Elliott has been a beast for me. He’s the perfect 3 and D wing for a budget squad, and I’ll probably keep him forever. But I also still feel like Luol Deng is the best value in the game. Since he came with the MJ Anniversary Collection, there were a zillion of his cards in the market. That still is the case, so Deng can be picked up for crazy cheap and will play great at small forward or power forward.

PF: Antoine Walker is a gunner, pure and simple. I had a ton of success running an offense through him, which was a pleasant surprise. Kenyon Martin had a free card last year that I loved, and this amethyst is nearly as good and essentially free if you watch the auction house. Regardless, Draymond Green is still the man at the four spot. He defends, rebounds and can hit the deep shot. This is a super impressive card that will probably always carry some value because of his hall of fame Defensive Stopper badge.

C: Hakeem Olajuwon. Just get him. He’s the best. 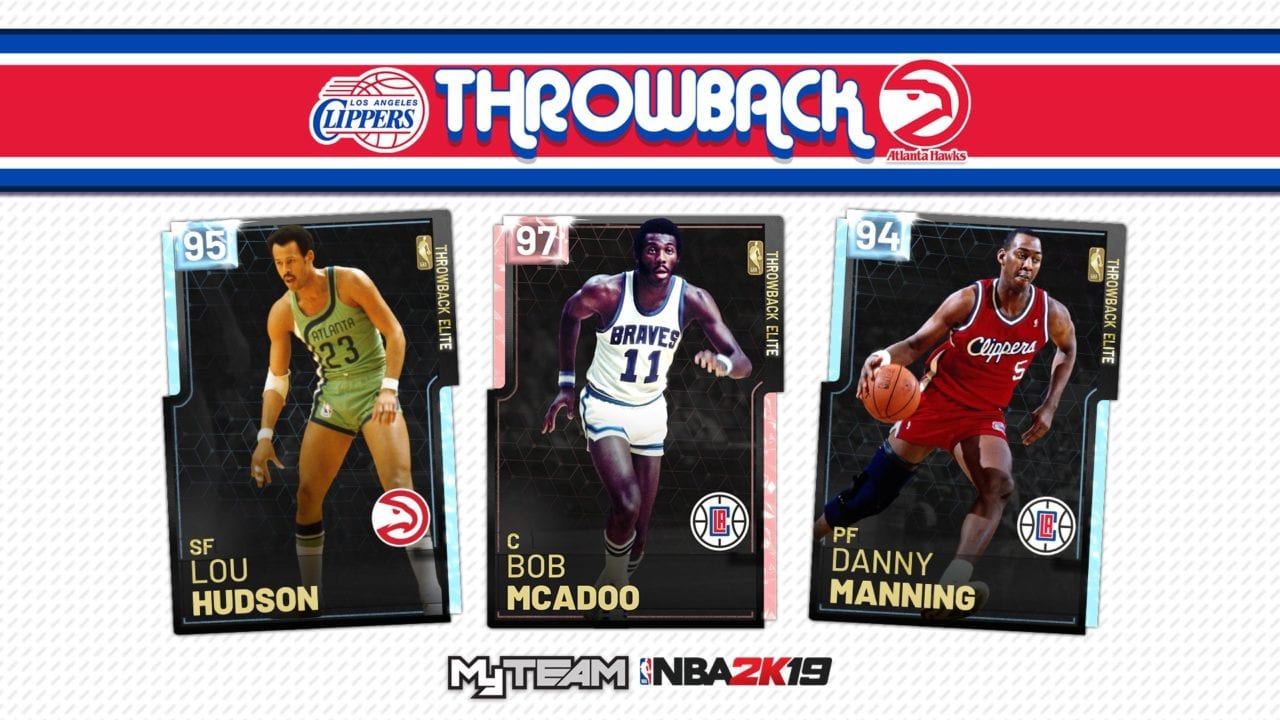 Yes, the Hawks and the Clippers are your throwback packs for the next couple of weeks. And no, I don’t think anyone really cares — not when there are also Chinese New Year packs out (more on that later) and All-Star content just around the corner.

I tried (and flipped for a tidy profit) the diamond Danny Manning. I liked his amethyst collection reward card a lot last year but didn’t feel the love for him this time around. There’s just a lot of better (or cheaper, like Draymond) options out there at the power forward position. 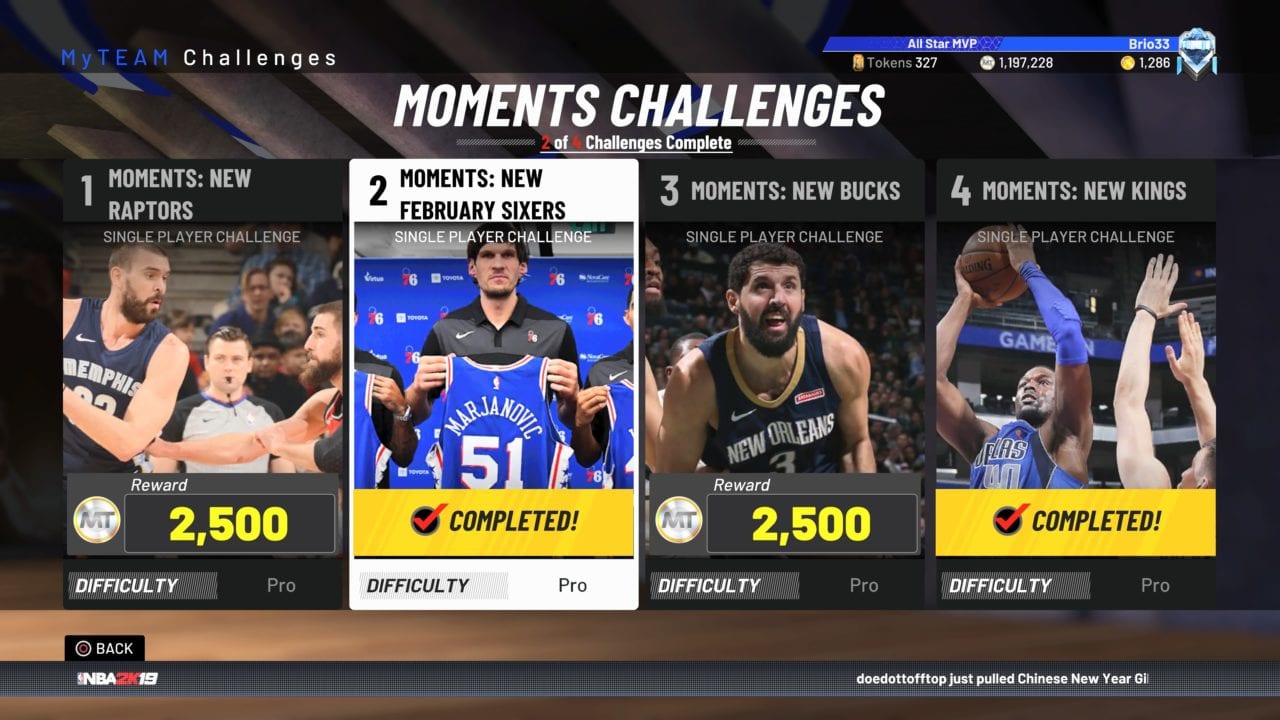 There are also some nice Moments Challenges up right now to beat new-look teams after the trade deadline. Winning them all nets you a robust 10K MT. I actually had a bit of a hard time against that new Sixers team, and am really excited to watch their journey for the rest of the season. 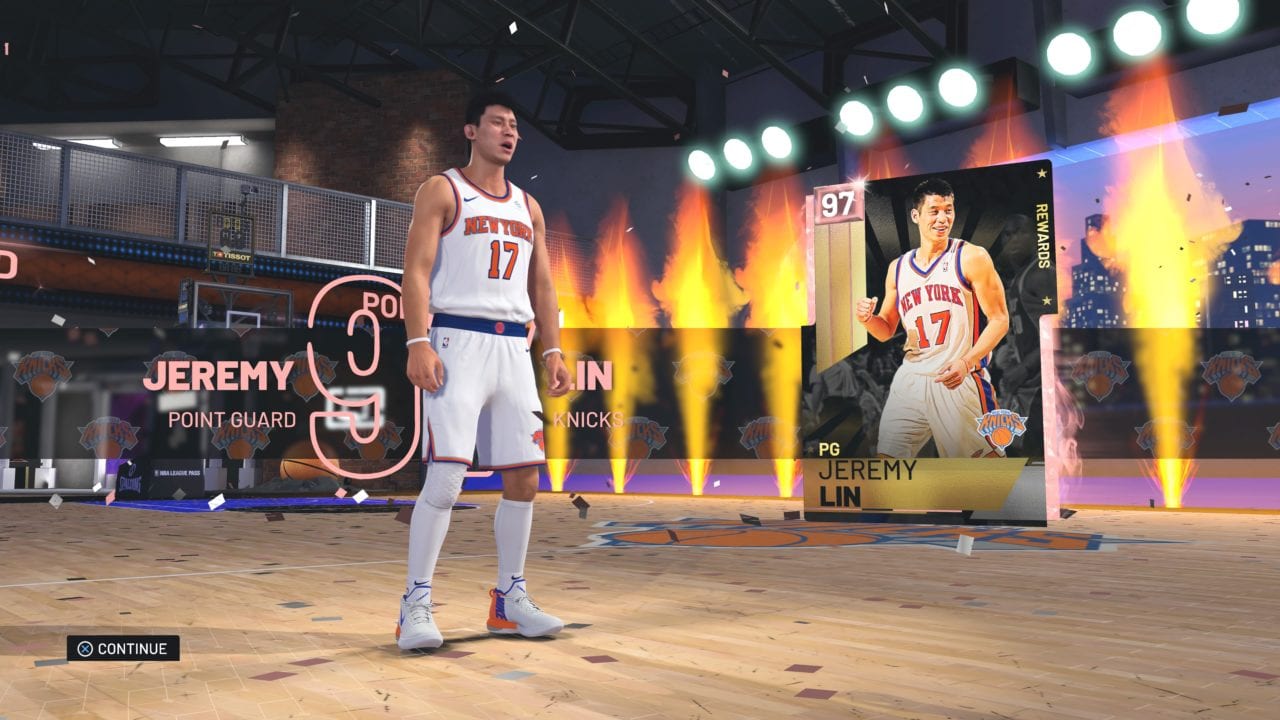 But okay, enough dealing things, the big news of the moment is the Chinese New Year packs. They’re stacked, and I had to have ALL OF THEM, because I absolutely had to have former Houston Rocket Jeremy Lin in what is easily his most powerful 2K card EVER.

Spoiler alert, I got him, but man it wasn’t easy.

I actually dropped $100, which got me three boxes plus a few miscellaneous packs. Those 35 or so packs got me what you saw in the cover image to this article — every card except the top four. In fact, I pulled so many amethyst Gilbert Arenas cards that now the sight of him makes me ill. Soooooo much money down the drain.

Luckily, going into the Chinese New Year drop, I had earned a ton of MT. 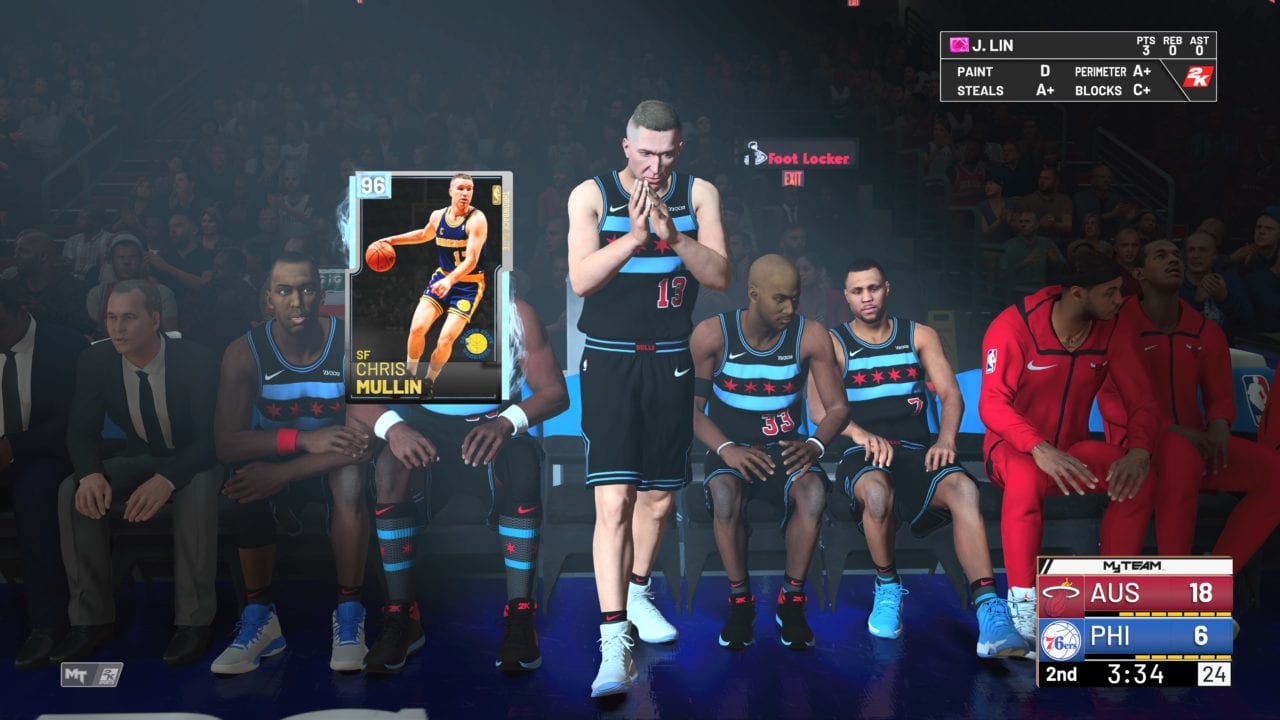 Selling a bunch of the aforementioned amethysts definitely helped, but one of my many go-to-flips has been diamond Chris Mullin. If I can find him for around 70K I’ll usually pick him up, then with a little patience I can inevitably flip him for 95 or 100K. As more cards come out with hall of fame shooting badges, I imagine that profit margin will shrink, but I’ve probably done that flip a dozen times over the last couple of months.

The most recent one I flipped I actually won in an auction for 58K, then sold for 89,995K. Awesome. Diamonds Jamal Mashburn and Andre Iguodala have also been good money makers. Their value eventually cycles back around.

So anyway, at that point I had enough MT that I could perform an experiment. I spent about 300K MT to open 35 single packs, just to see if it made a difference in what I pulled.

Yes, I got another zillion Gilbert Arenas cards, but I also got two pink diamond Stephon Marbury cards, plus (thankfully) one diamond Tracy McGrady. Take that for what you will. 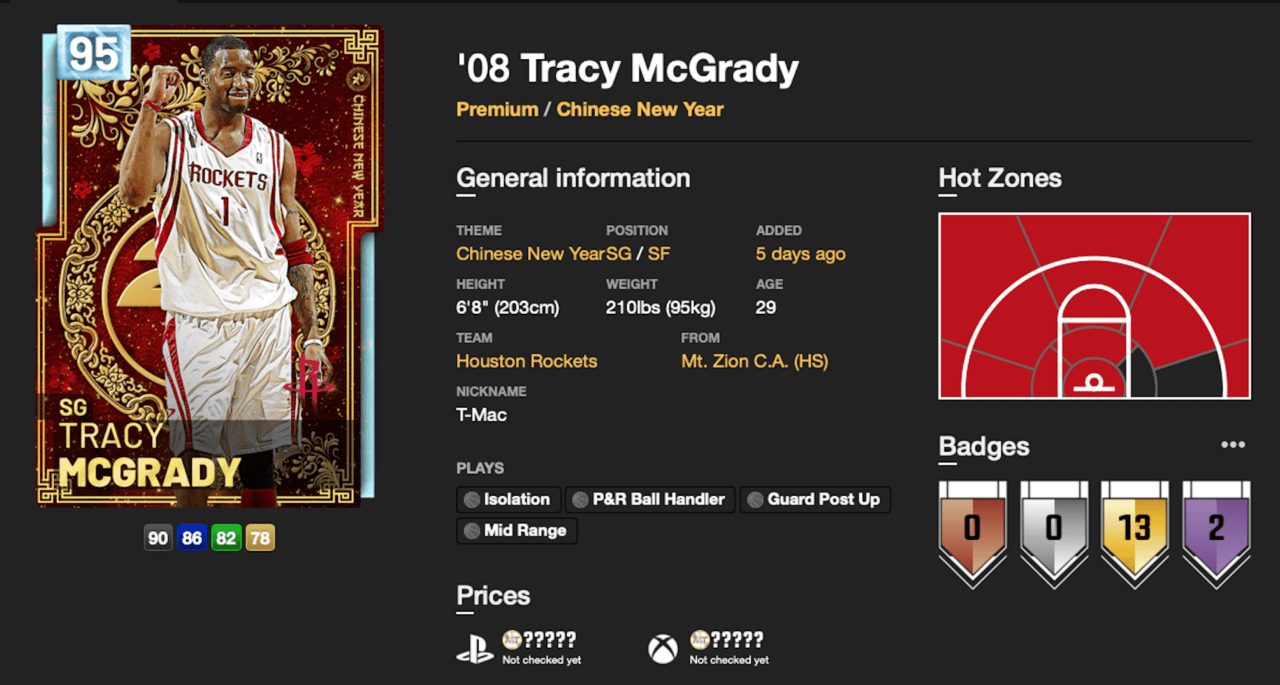 Despite his goofy expression, McGrady is easily the crown jewel of the set.

He’s a 6-foot-8 guard with hall of fame Limitless and Deep Range Deadeye, plus he can attack with the best of them. Hall of fame Posterizer would have been nice, but they’ve got to save something for the inevitable pink diamond Orlando Magic card. Either way, this version is going for 400K or more on the auction house, so I’m obviously pretty pleased.

Then, through some patient sniping, I was able to pick up Yao and Josh Smith for a reasonable price. So against my better judgement — but without a tinge of regret — I locked in my second set of 2K19’s MyTeam. 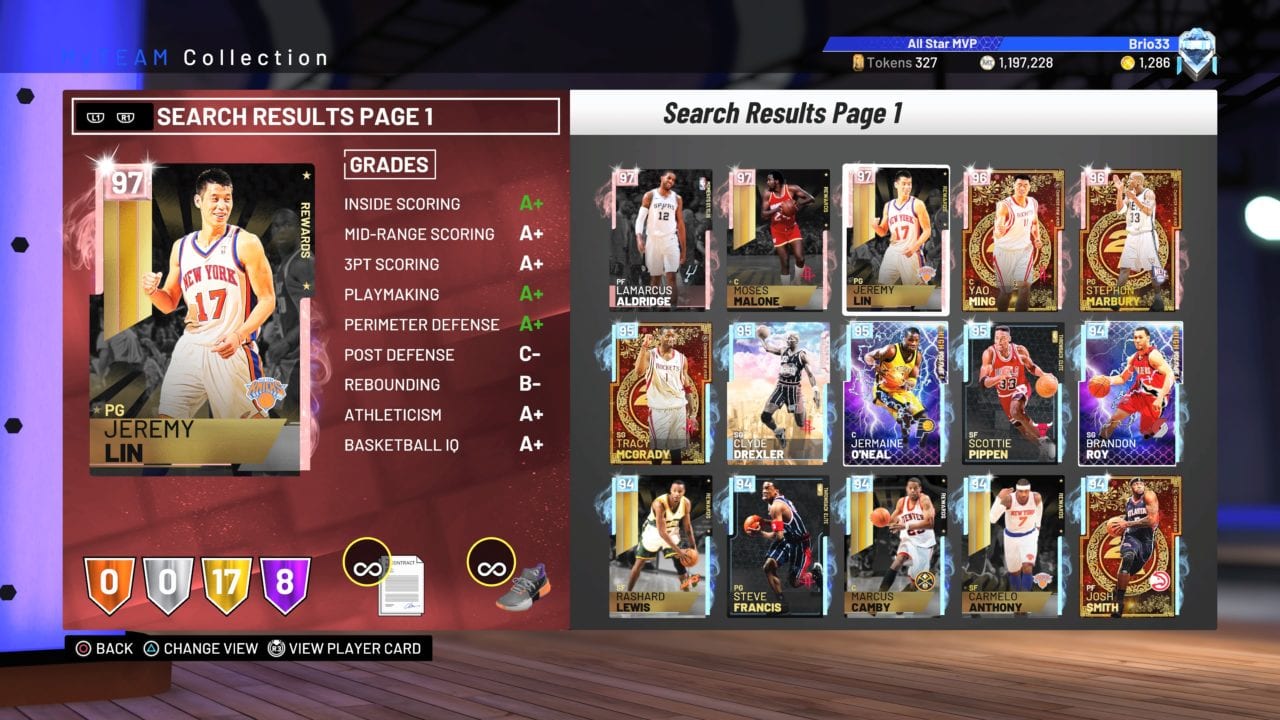 These are my top cards right now.

They’re either players that I’ve locked in (through sets or via reward tokens), or are players I personally love, like LaMarcus Aldridge and Clyde Drexler. I’ve also been considering parting ways with Scottie Pippen. He still has great value, and rightfully so because it’s a great card, but I have to imagine we’ll be getting an elite wing in the coming days that will have a bunch of sweet hall of fame badges (Scottie only has the one, Defensive Stopper).

If I were smart, I could probably sell Pippen for 100K or more and buy him back in a couple of weeks for half that, but I’m not always very smart. Honestly, I can’t ignore the nostalgia factor. Plus, he did technically play for the Rockets, so he’ll always have a place on my squad, and in my heart.

Good luck navigating the upcoming crash, and let’s keep our fingers crossed that the All-Star content will be worth the wait!