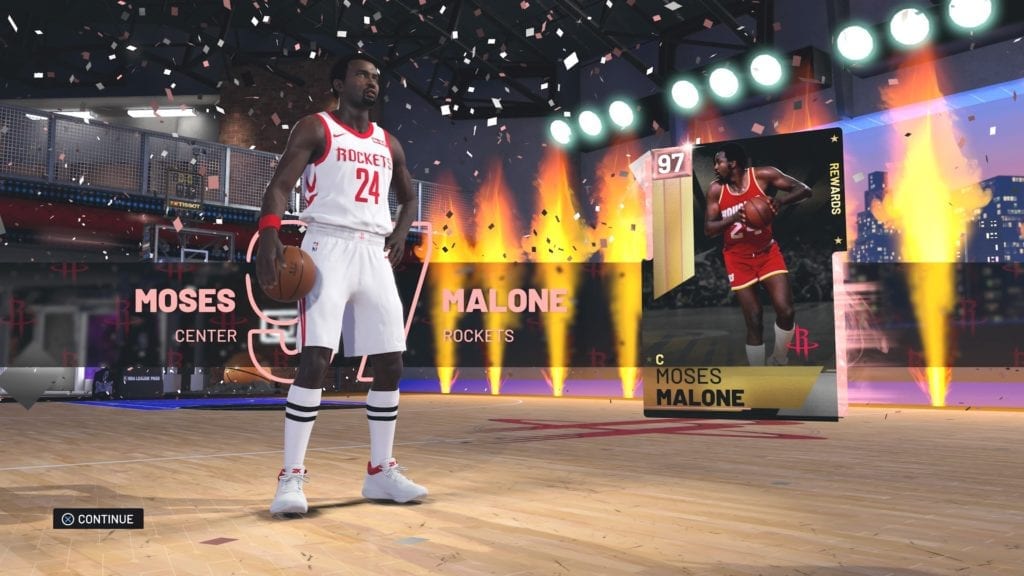 I’ve already broken two 2K19 MyTeam promises to myself: Not spending any money and not locking in sets. 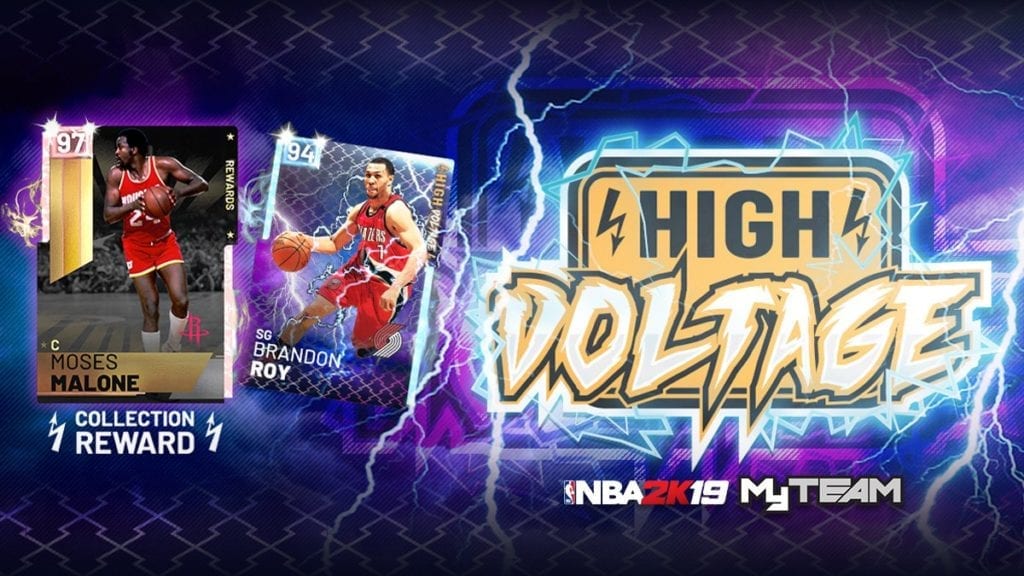 But wow, what a set. First of all, how gorgeous are these High Voltage cards. The still image doesn’t really do it justice, the lightning animation is PERFECT.

So, why did I break those promises? Moses. Freaking. Malone.

He hasn’t been in MyTeam for a few years, and has definitely been missed. I especially couldn’t resist a pink diamond in his Rockets uniform! So I decided right away to go all-in.

But, that money though…

I dropped 100 bucks to open a 20-pack box and a 10-pack box, and (per usual) the best High Voltage player I got was an amethyst. Rod Strickland. Who is going for less than some of the rubies. I did get most of the lower-tier players though (and bought the rest for cheap), so all I needed were the heavy hitters: diamond Jermaine O’Neal and Brandon Roy, amethyst Ray Allen and a ruby Shaq.

With my remaining VC I decided to try a few Moments packs. Because the High Voltage packs sucked, and I had seen online that Brandon was supposedly in Moments and Heat Check packs too. I didn’t get him, unfortunately, but I did end up getting a diamond Moments Steph Curry. Thankfully. He sold four hours later for 175K, at which point I got to work.

I believe the technical term is ‘fire sale’.

Bye bye Bill Lanier. Bye diamond Iggy (I got him last week for 70K and sold him for 100). Bye miscellaneous golds, bronzes and silvers that I was holding onto in an attempt to earn more tokens. (Who needs token reward Duncan or Mutombo when I can have Moses now.)

All that selling and flipping got my MT savings up to about 350K. Not bad.

The problem though, is that at the time of my writing this, Brandon Roy alone is going for somewhere in the 250-300K range. So I watched and waited over the course of the weekend, attempting to snipe my way to victory.

Luckily Jermaine O’Neal dipped into BIN territory pretty quickly, and my first break was getting two Jermaine’s for 74K and 75K on Saturday. I sold the extra one for 94,995, which was a nice little profit. Then I got decent deals on Ray Allen and Shaq (35K and 11K respectively) on Sunday, so it was down to trying to get Brandon for the 200ish MT I had left. (I did fall prey to a crazy cheap amethyst Shane Batier thanks to the market crash. I had been wanting him and also just couldn’t resist. He’s basically my Ron Artest workhorse card from last year, but better.)

I kept playing the game (there are good Moments Challenges up that have solid MT rewards) and continued to be diligent on the auction house. A few more days passed, and some folks were getting hasty with lower-tiered High Voltage cards so I was able make more MT.

But even with more MT to spend, I still had a bunch of frustrating last-second B-Roy bid fails. Then, finally, laaate in the middle of the night on Wednesday– 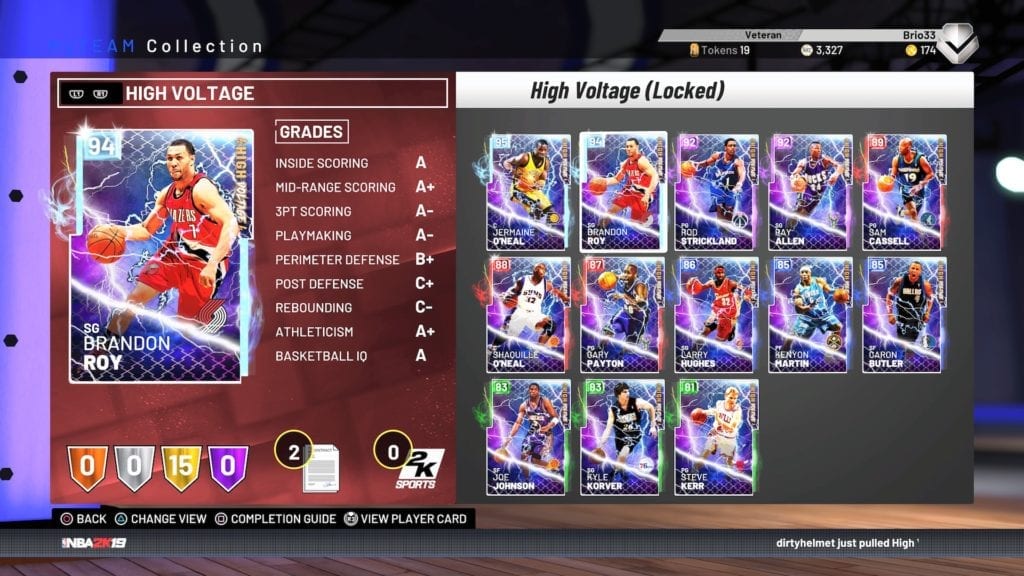 –I got one for 235K! Collection completed!! Moses acquired!!!

I think it’s safe to say that my MyTeam passion has been re-ignited. I love Moses, and have been super happy with Roy, O’Neal and even some of the lower-tier cards like Payton and Caron Butler. But mainly, I’ll admit that I’m locked in because I’m financially invested, which, objectively, I know is terrible. But collecting anything can be a pretty emotional experience and I got caught up. I’ve made my peace with that.

Yes, I’m sure next time there is a Premium Collection or awesome Moments drop (probably tomorrow at the rate 2K has been delivering content) I’ll have a tinge of regret, but it’s too late now. The money is gone and the collection is locked. All I can do now is dive in, ride the high and enjoy these new cards.

I mean just look at those badges, Moses is an absolute beast! Definitely my end-game center… right? 😬