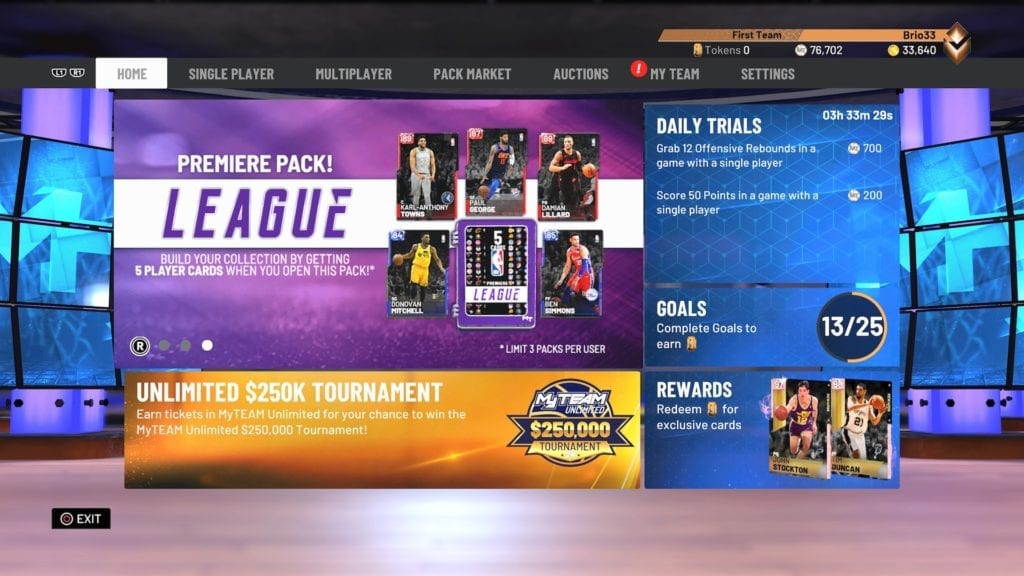 Literally the day before 2K19 launched, I played my last game of 2K18 All-Time Domination. My squad of primarily pink diamonds destroyed the competition, and for a hot minute I was king of the world. But at 11 p.m. (CST) on the 6th of September I fired up 2K19 for the first time.

Adios all 99-rated LeBron and all your pink diamond buddies.

It’s back to silvers, golds and sapphires for me… 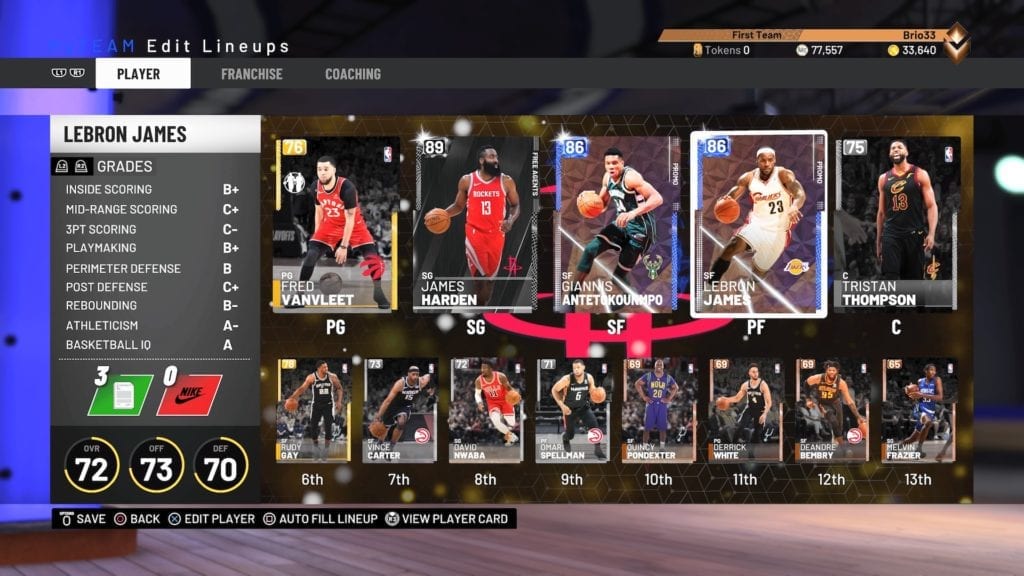 And I couldn’t be happier.

I think it’s safe to say that 2K has outdone themselves this year across the board (for more information, see our review here or alternate takes here), but as you can tell from the title of this article, I’m focusing on MyTeam.

I do have to start with some bad news, though.

Not only does the auction house need to be unlocked (again), you have to jump through some irritating hoops (pun intended) to do it. 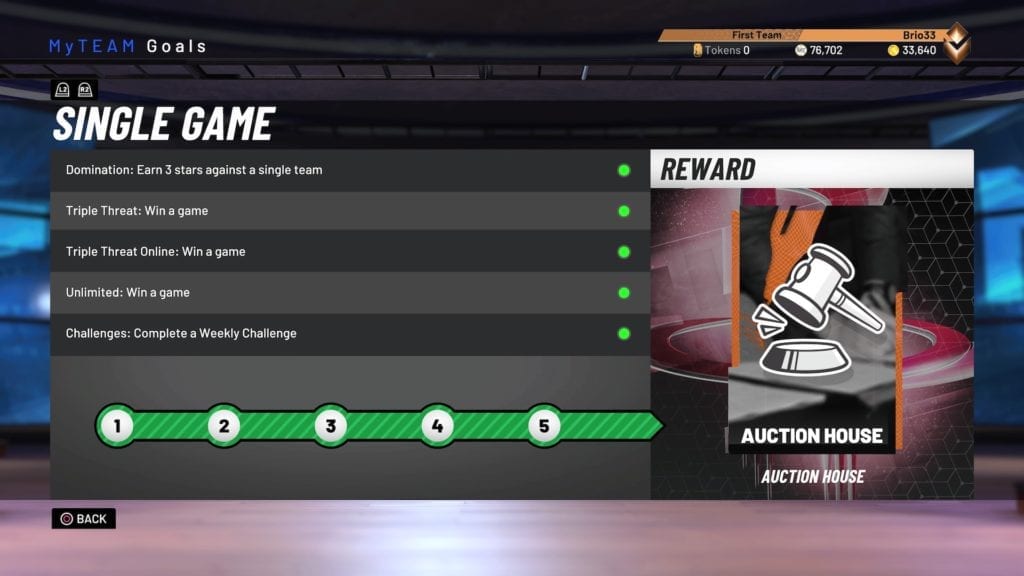 Yup, you have to win two online games, which is easier said than done.

I started 2K19 with my sapphire LeBron and Giannis (pre-order bonuses), a free agent James Harden (choose your starter pack wisely) and a bunch of scrubs. But the majority of my opponents that first night already had impressive teams.

To put it in perspective, their pre-order LeBron and Giannis were already coming off the bench.

Now I like the idea of having ruby and amethyst cards available from the jump, but unless you’re spending a lot of cash or are crazy lucky, you’re going to be at a disadvantage. Because it’s not like you can spend your 50K MT pre-order bonus (for the 20th Anniversary Edition) on a good card in the auction house at that point.

But, after losing a few times and cursing the 2K gods, I finally got it done and could start buying and selling cards.

If you’re looking to get into the financial side of 2K, now is the time to invest in silver. Silver players that is. As gamers across the world scramble to complete collections for tokens (more on that later), the silver cards have skyrocketed in value. 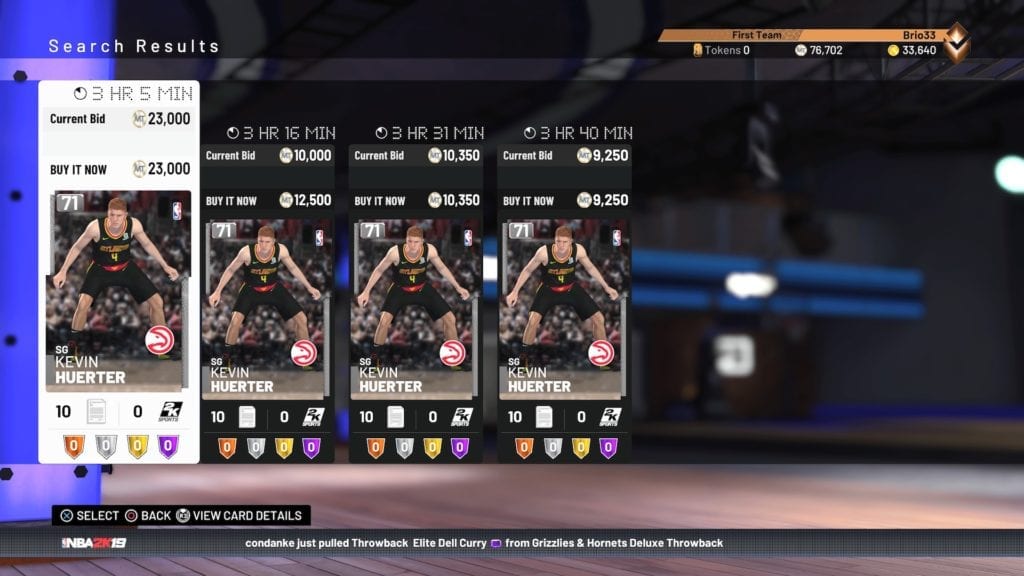 I’ve flipped quite a few cards already to stockpile MT, which I’m going to save, because this year I’m trying to think endgame from the very beginning.

Why waste cash on an amethyst Durant now when I know there will be five different diamonds of him later on? So my plan is to invest in a couple of good players that I’m comfortable with now to win games, then save the rest of my MT for later. (I have also vowed to not spend money on VC this year, wish me luck.)

Just as an example, I used my 50K MT pre-order bonus to buy ruby LaMarcus Aldridge and ruby DeMar DeRozan (who are dynamic duo partners this year), then I surrounded them with cheap utility players like 3-and-D wings or rebounding big men (plus of course LeBron and Giannis). So far, this strategy is working for me as I’m winning games (offline) pretty handily, even with the improved AI and defense of 2K19.

But after unlocking the auction house, your best bet is to look through the goals (on the Home screen) and finish up all the opening challenges. This is a good way to earn some tokens. 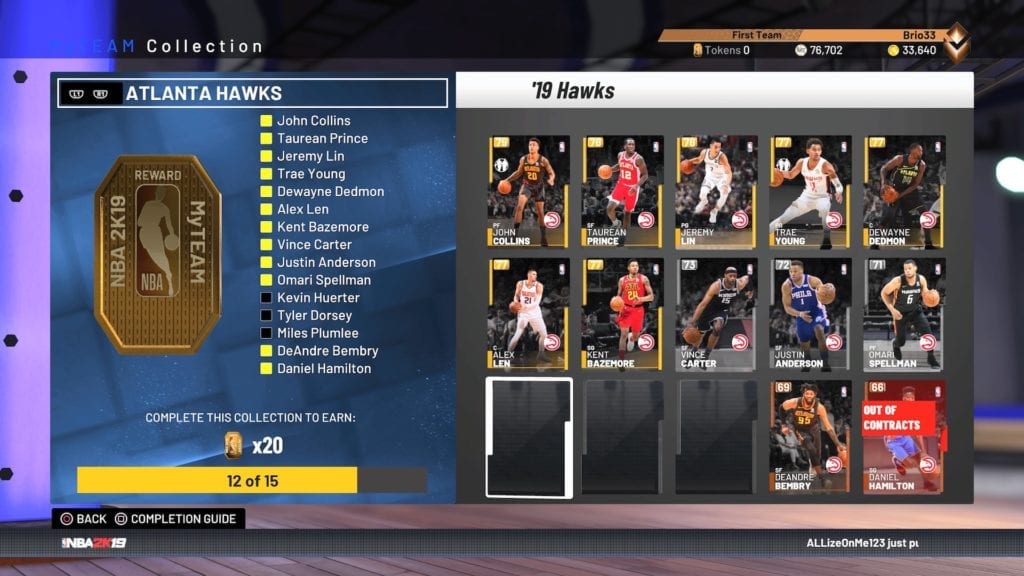 Tokens are essentially a third currency for MyTeam that allow you to unlock cards throughout the year. They can be earned in basically every mode, including a hefty 20 tokens just for completing a team collection.

Then on the Rewards page (also via the Home screen), there are different tiers of content for each gem color. 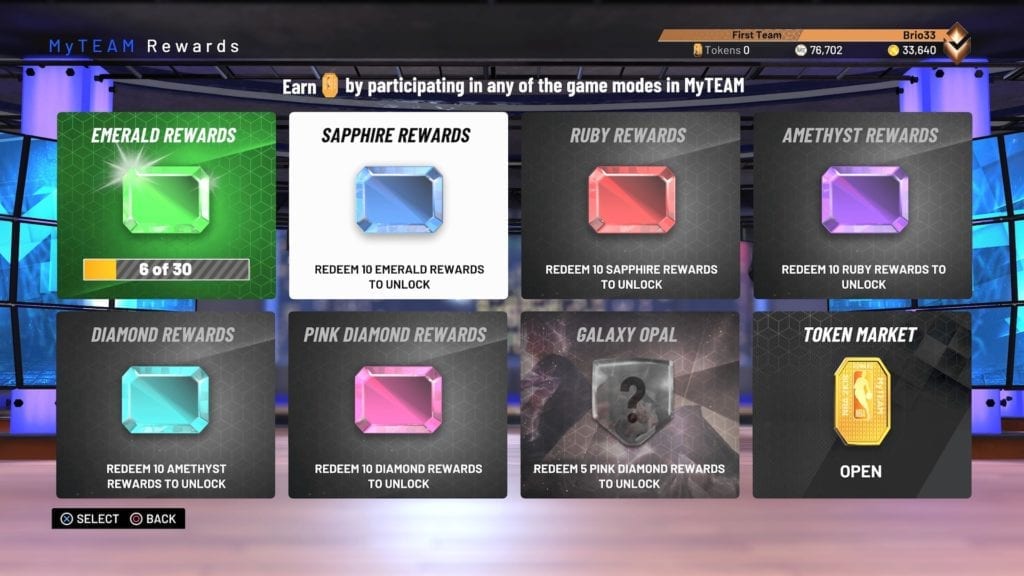 The trick is to unlock higher tiers by cashing in tokens on players from lower tiers. Some of the cards available are pretty great though, especially as you get to the amethyst and diamond levels.

And in the lower tiers, you have the option of choosing 10 cards (out of 30) to unlock, which is nice. 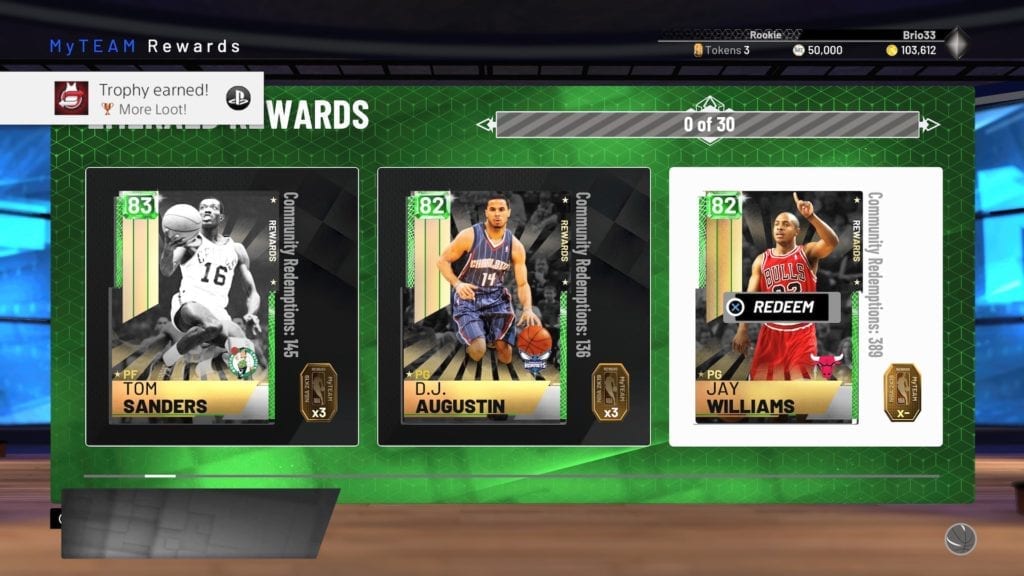 Feel free to peruse all of the potential rewards as you can look at stats and badges to start planning your card unlocking strategy. I have a few cards I’m particularly psyched for already (don’t EVER underestimate the heart of amethyst Rudy T!), and I love that from day one I can see a path to get those cards. 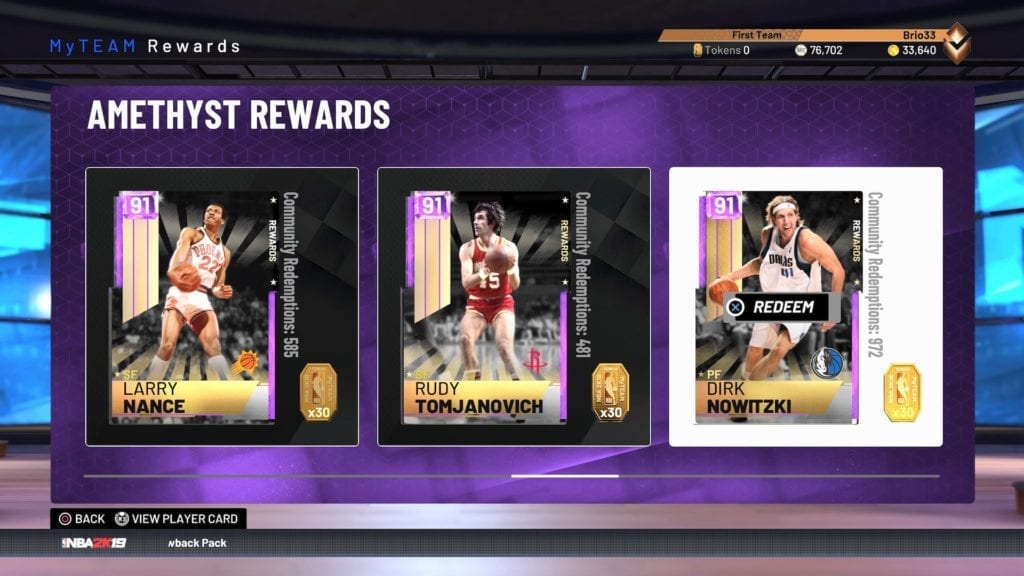 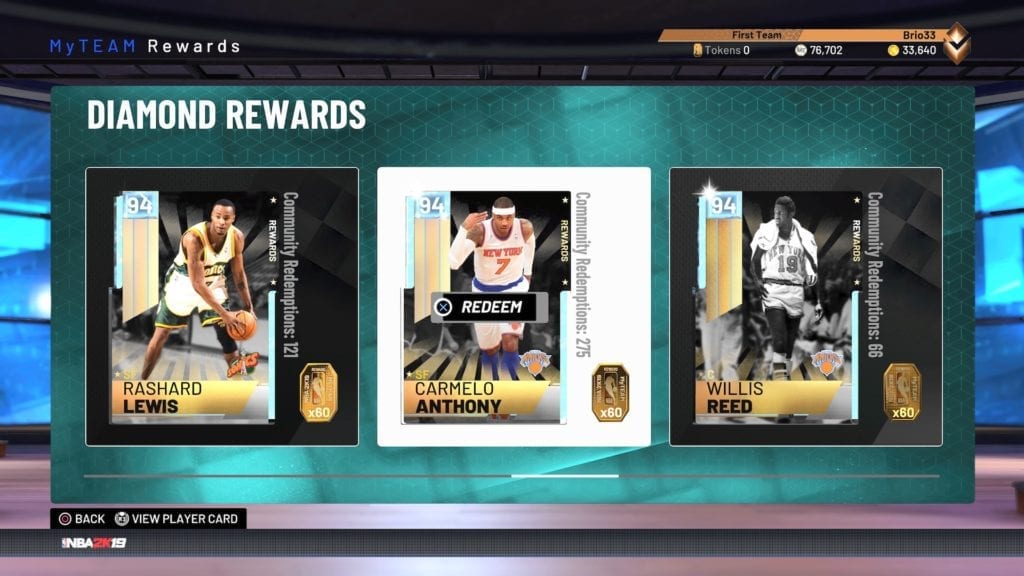 Look at how many people have already redeemed diamonds!

I’d hate to be a first-time MyTeamer (the standard edition of the game did just come out) and have to go up against diamond Melo or Rashard Lewis. And I actually wouldn’t be surprised if by the time you’re reading this, someone had already unlocked a pink diamond. 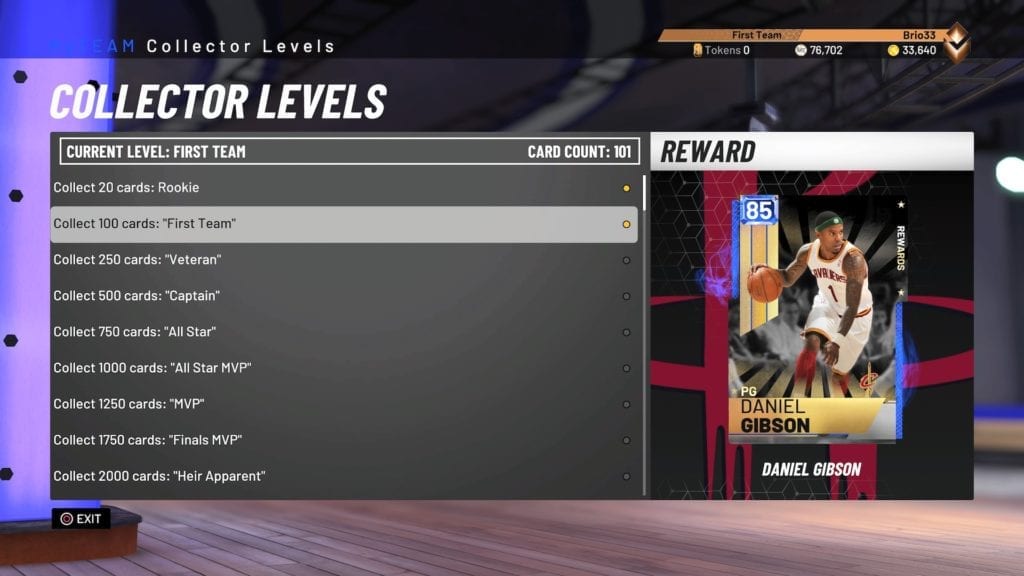 For the rest of us, another way to earn players (plus MT or tokens) is through collecting cards. I’m personally glad this feature is back in 2K19, as it presents a new layer of strategy when it comes to collecting.

Is it worth quick-selling that jersey card when technically it could count towards a reward? That’s up to you.

But after everything is unlocked and you have a team you feel good about, it’s time to get to work. 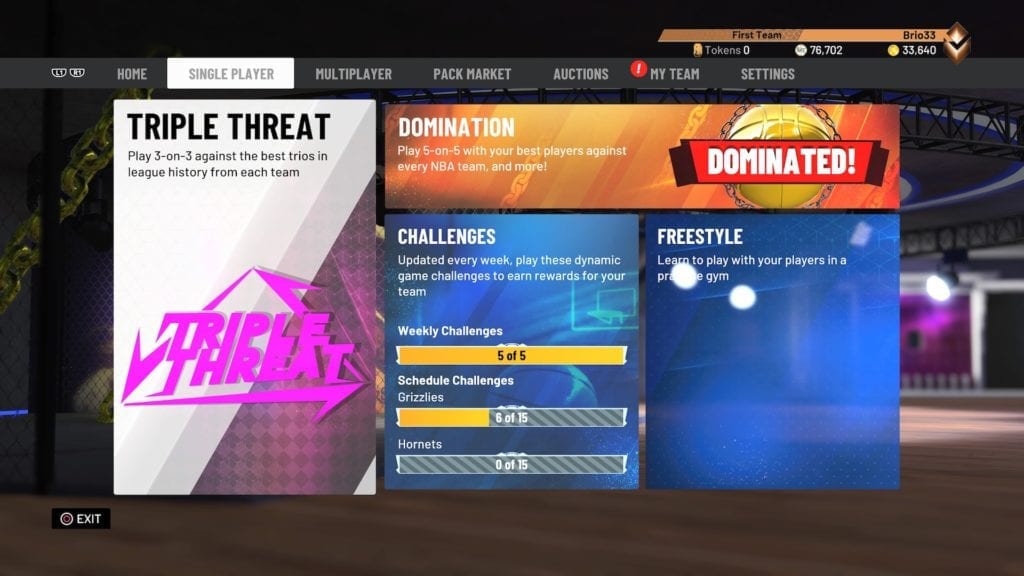 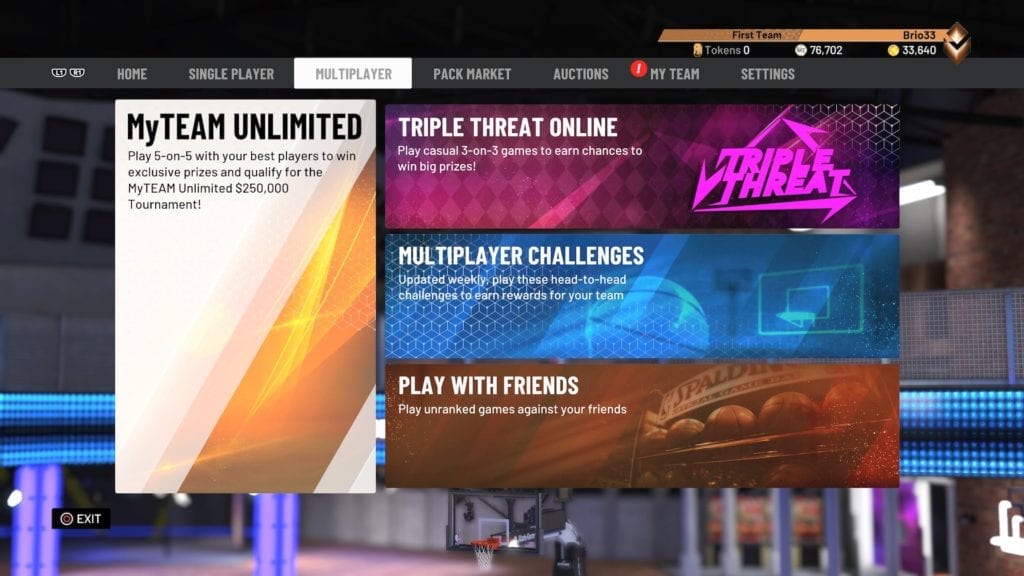 Domination is back, and is a great way to earn content. As are schedule challenges, which are being released every two weeks this year to keep from being overwhelming, plus the rewards are better than last year (Cards and packs, plus MT).

The new kid on the block, Triple Threat, is a 3-on-3 mode that can be played offline or online, and is a good way to earn tokens. It’s also a ton of fun. Then MyTeam Unlimited is an online-only mode (think Super Max from last year) that in addition to doling out great Player of the Month awards, will give MyTeamers a chance to participate in a tournament to win $250,000. 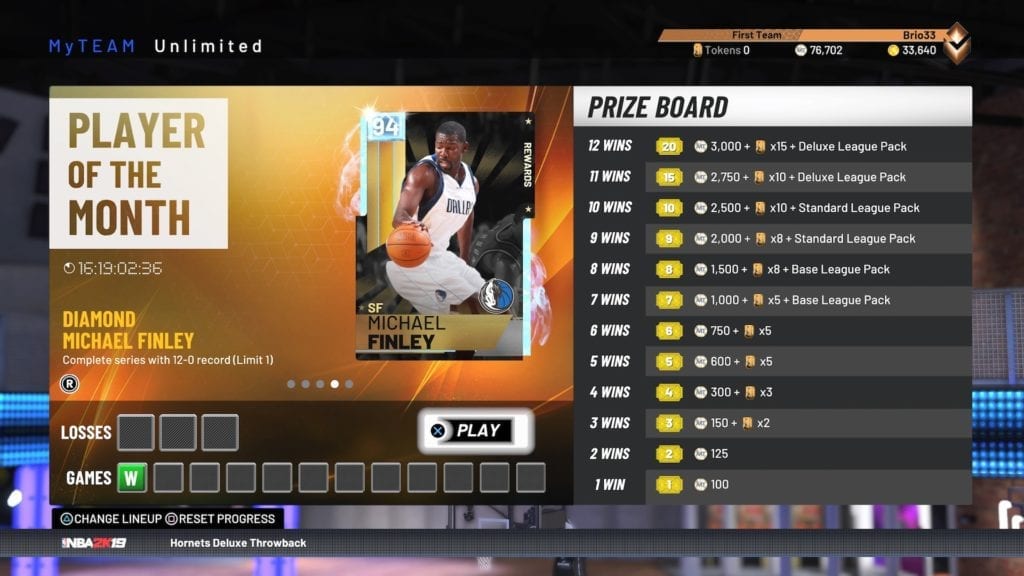 Not MT, not VC and not tokens…I said 250 thousand dollars. 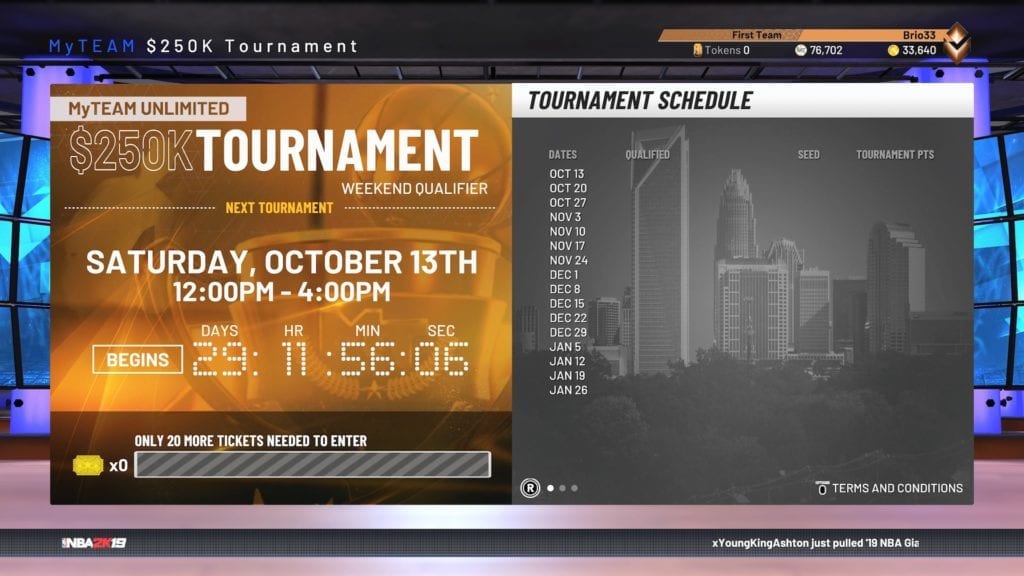 Okay, it’s time to wrap this up as I know you’re tired of reading and ready to get back to playing.

Speaking of which, if you were already looking for more cards to covet, it’s time for the first Premium Pack of the year to drop. Meet some of the Rookie Sensations: 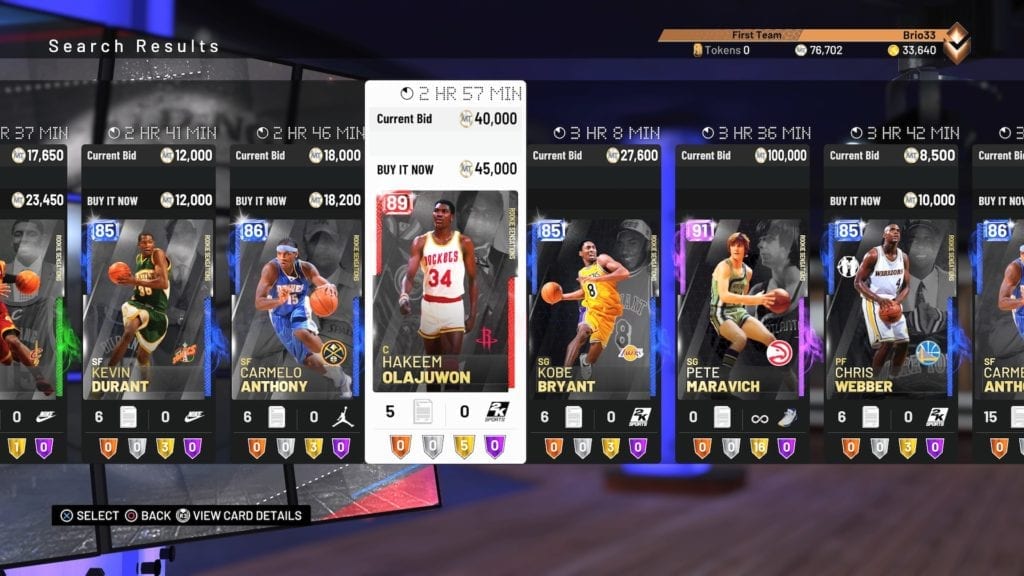 As much as I want that ruby Hakeem, I’m going to abstain. I’d rather save my MT (and VC and tokens) for the inevitable diamond Dream that will be here before I know it.

In the meantime, I’m going to climb the gem tiers, work the auction house for MT, and just enjoy everything MyTeam has to offer in NBA 2K19.

I hope you’re doing the same.