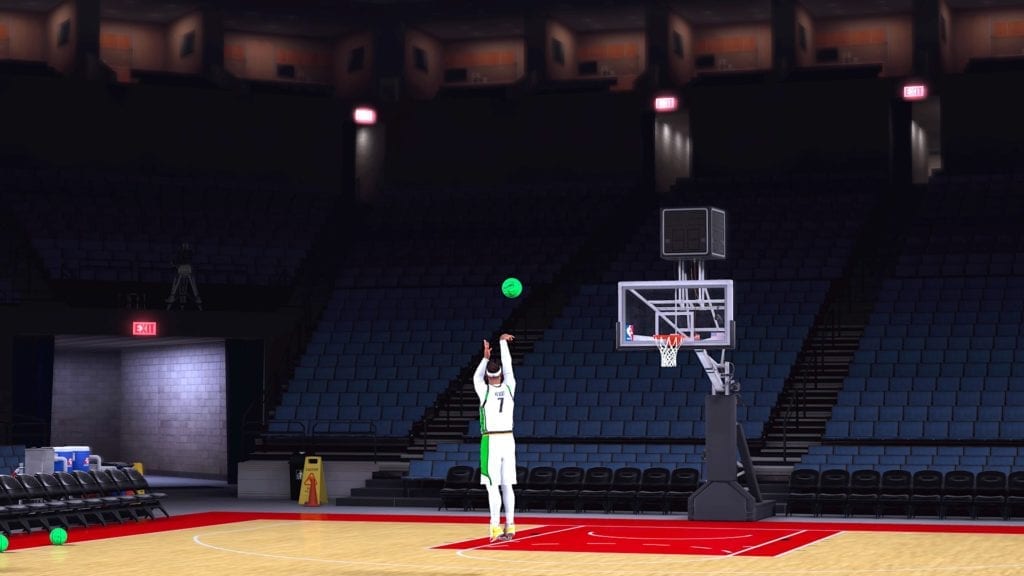 It’s two months into NBA 2K18 season and sometimes I still feel like I’ve barely scratched the surface of this game. I’ve been so focused on MyTeam that the other modes are getting a little jealous. Just the other day, I found a weird note tucked under my windshield wiper:

“Brian, I overheard Shammy and DJ chatting the other day…they miss you. Maybe you could pop in sometime and say hello?

A little passive aggressive, right? I thought so, too. Well maybe when I get through with this week’s challenges… 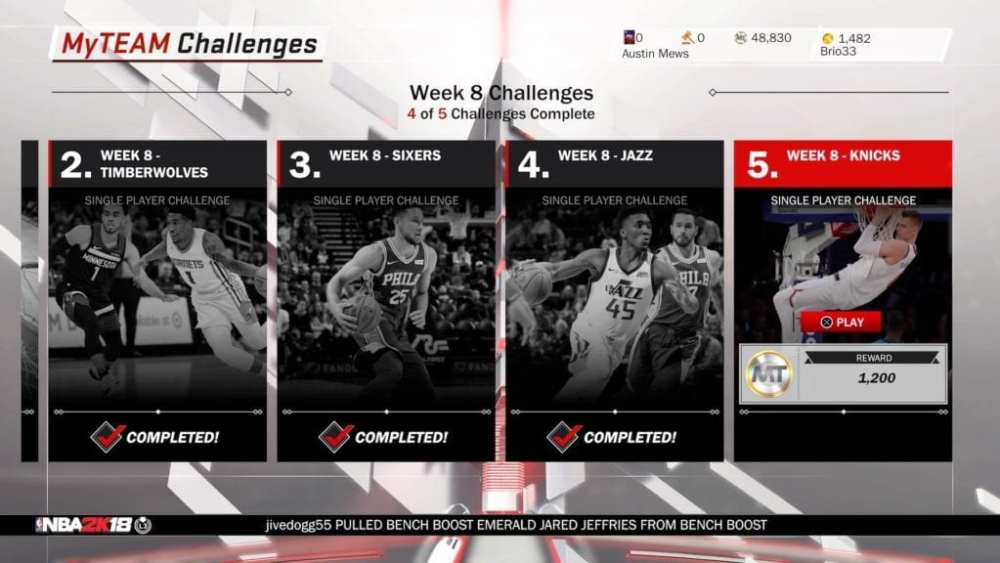 After all, ruby Bruce Bowen is stopping by for Thanksgiving and I have to be ready.

To earn this week’s challenge token, you’ll need players from the Timberwolves, Sixers, Jazz and Knicks, so plan accordingly. I’m excited about that last challenge because it will give me an excuse to use my Carmelo Anthony and Kristaps Porzingis dynamic duo. I haven’t dusted them off in a while, where earlier in the season I was constantly relying on Melo to hit big shots and get me wins.

Poor guy, maybe he (looking pretty lonely in my cover image) and MyCareer should grab a beer together sometime. 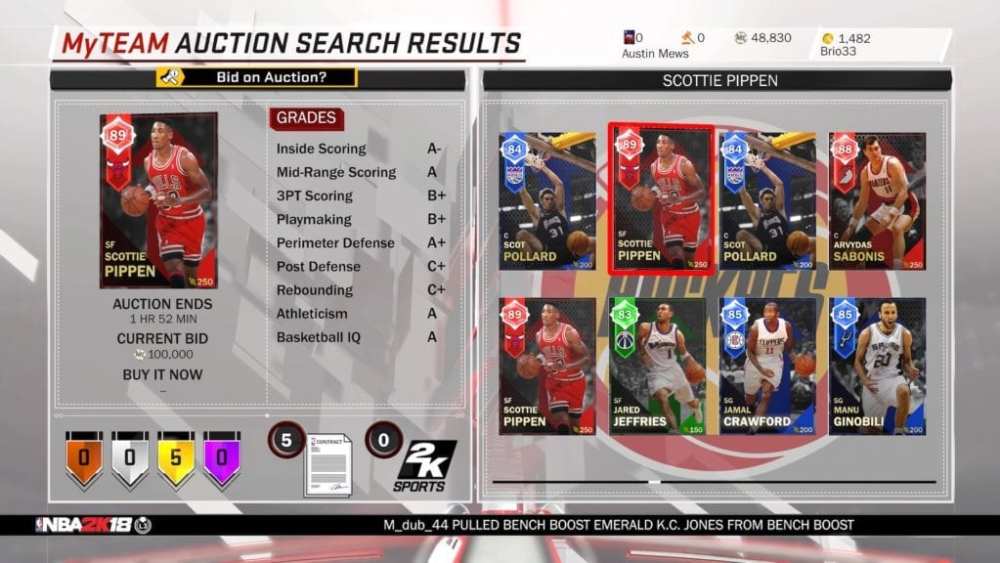 This week my main man Melo, Bruce Bowen and the rest of the small forwards have some serious competition: the Bench Boost premium pack includes an impressive looking ruby Scottie Pippen.

I might have to buy a couple of packs to try and get him, or (maybe more-so) the Arvydas Sabonis, who literally can do everything from the center position. His gold badges include Drop-stepper, Up & Under Specialist, Catch & Shoot, Pick & Popper and Dimer, which is kind of insane for a 7-foot-3 player. 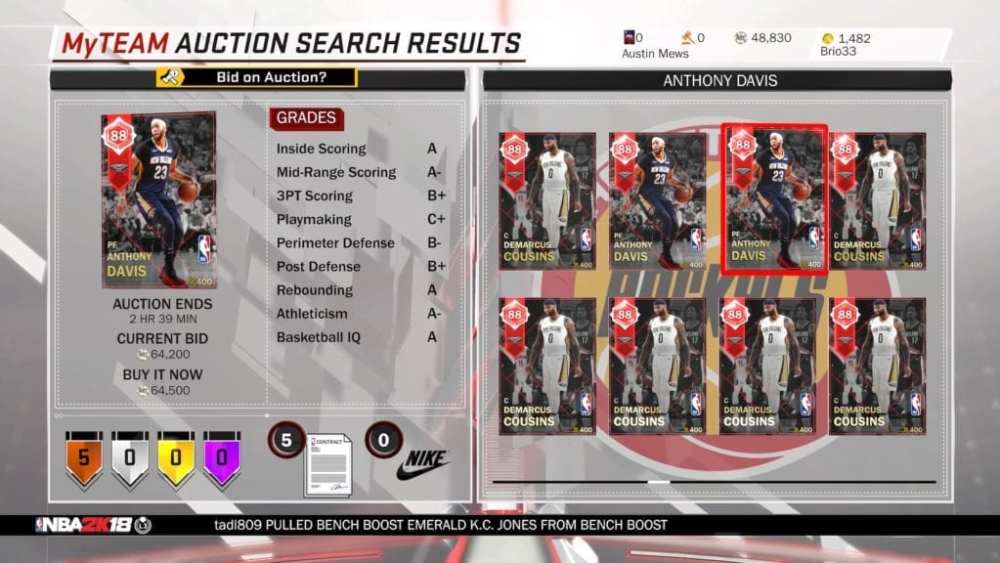 Quite a few new Moments Cards were released in the last week too, including a ruby Anthony Davis to go with his teammate Demarcus Cousins.

You can go here and here to see most of the new cards.

Now that there is a new (emerald) Lonzo Ball, I might try to pick up his gold Moments Card from a couple of weeks ago. The prices will surely drop, and his size and playmaking ability make him an intriguing possibility off my bench. Plus his silver card has gotten me through some of the Schedule Challenges, so I feel like I owe him some love. 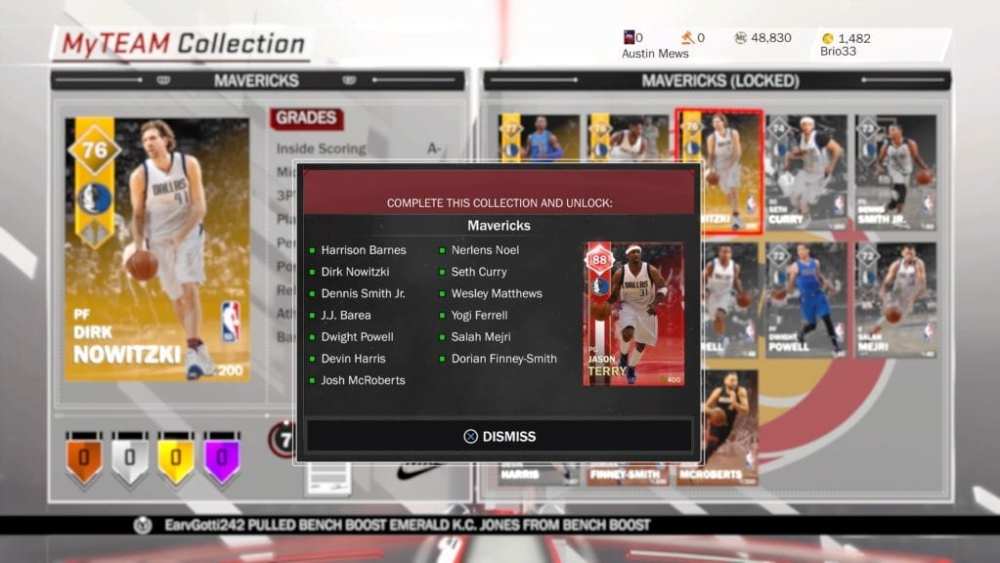 The main thing I wanted to bring up this week though, is something I myself just figured out about the collection rewards. Just in case you were in the dark like me, let me lay out a case for completing (a sh*t-ton of) teams.

Let’s take the Mavericks (above), for example. If you catch ’em all you’ll be rewarded with a ruby Jason Terry, which as you can see, I’ve already done. It didn’t cost me much, and Jet (with his 99 system proficiency in Seven Seconds) has been a great addition to my squad.

Then, if you manage to get your hands on all of the historic Mavericks— 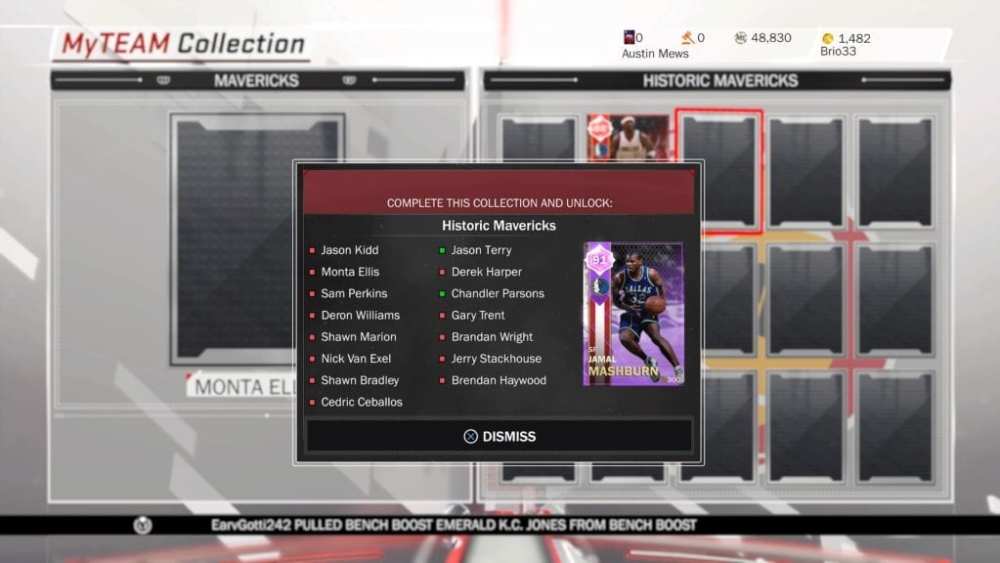 —you’ll get an amethyst Jamal Mashburn. Pretty cool. Except as I’m discovering so far, it’s actually a lot harder to find some of the historic players than you’d think.

The gold and emerald players are out in the wild, and while some are overpriced, they’re at least gettable. The sapphires and rubies, however, are harder to find than wins for the Dallas Mavericks (sorry Dirk). As I mentioned last week, a lot of them haven’t been released yet by 2K, or the ones that have are insanely expensive.

So this is going to be a marathon, not a sprint. But if you stick with it, the reward appears to be worth it: 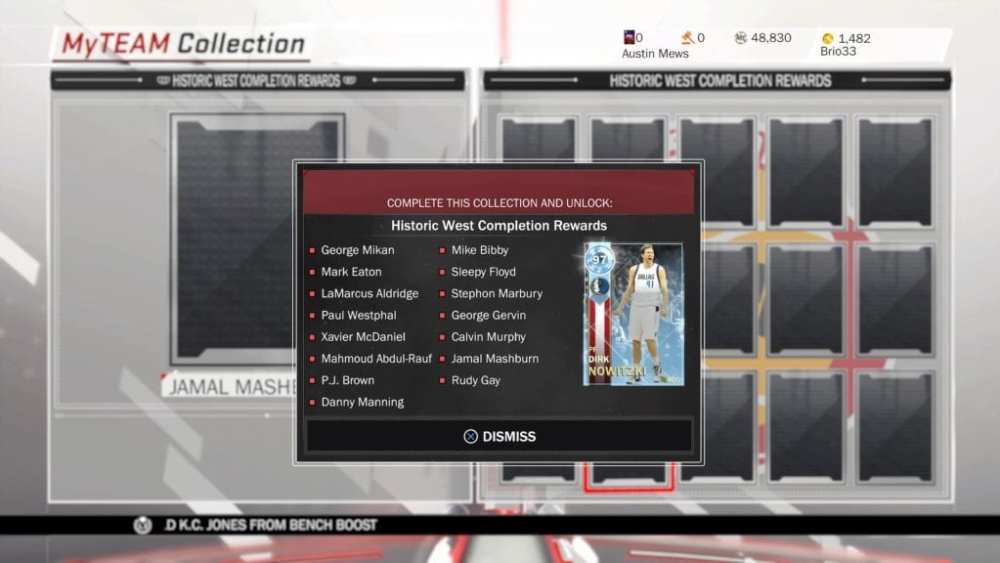 Completing all of the Western Conference historic teams will get you a Diamond Dirk Nowitzki. And he is stacked. 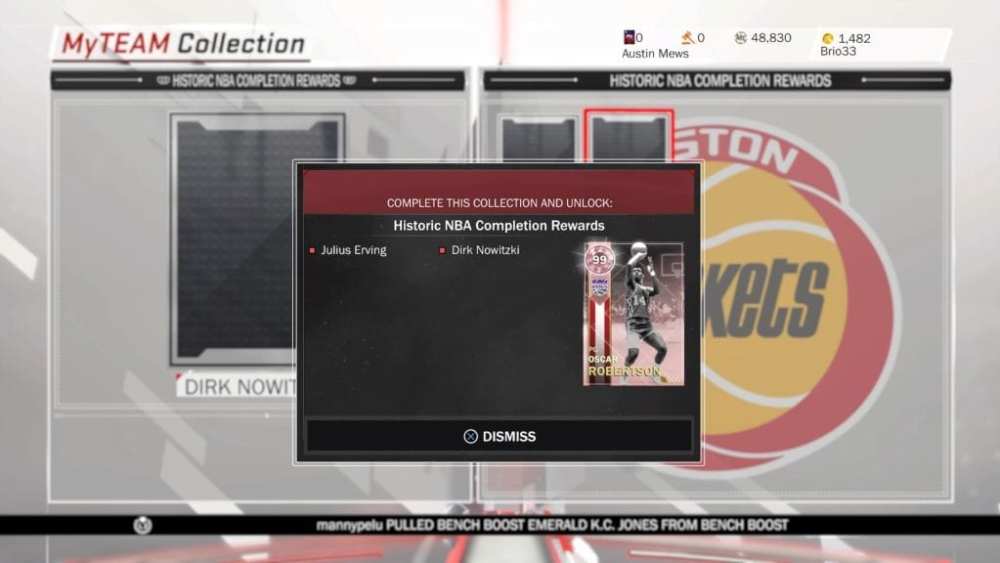 Though if you’re really ambitious, you could add the Eastern conference teams (regular and historic) to your to-do list, which would net you a diamond Julius Erving. And finally, earning Dr. J and Dirk will unlock the above pink freaking diamond Oscar Robertson!

Now personally, I think I’m going to focus solely on the Western Conference teams, which will allow me to sell anyone I get from the East and make some MT. Otherwise, I’m relying on duplicate cards and a whole lot of grinding, which I don’t know if I can feasibly do.

But if I can earn that diamond Dirk Nowitzki (ending my search for the perfect stretch 4) by the end of the season, I’ll consider my NBA 2K18 MyTeam campaign a success. If any of you are joining me on this journey, good luck!