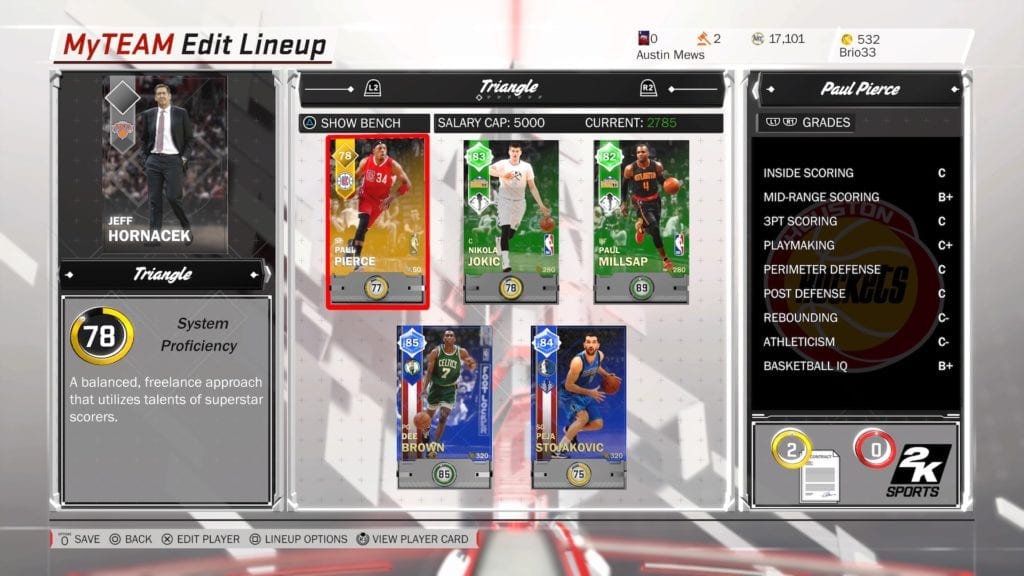 I mentioned last week that I’ve got so many cards now, some players just don’t get a lot of love. Well, challenges have become the equivalent of NBA garbage time for me. I’ll pick an emerald or sapphire that I haven’t used in a while, and build a team around him in a System Proficiency I don’t typically use.
For example, I like Nikola Jokic, but he doesn’t get to play much compared to Boogie or my sapphire Tyson Chandler. So I created a Triangle lineup with him and his dynamic duo partner, Paul Milsap. And as a bonus, I get to use that Dee Brown card I got for collecting challenge tokens.
I’m actually using that lineup to play this week’s challenges, which require players from specific teams. In this case it was the Nuggets, but you’ll also need a player from the Heat and the Raptors. If you’re like me you may need to hit up the auction house, and spending 500 MT for a silver Heat player is worth it to be one challenge token closer to ruby Bruce Bowen! 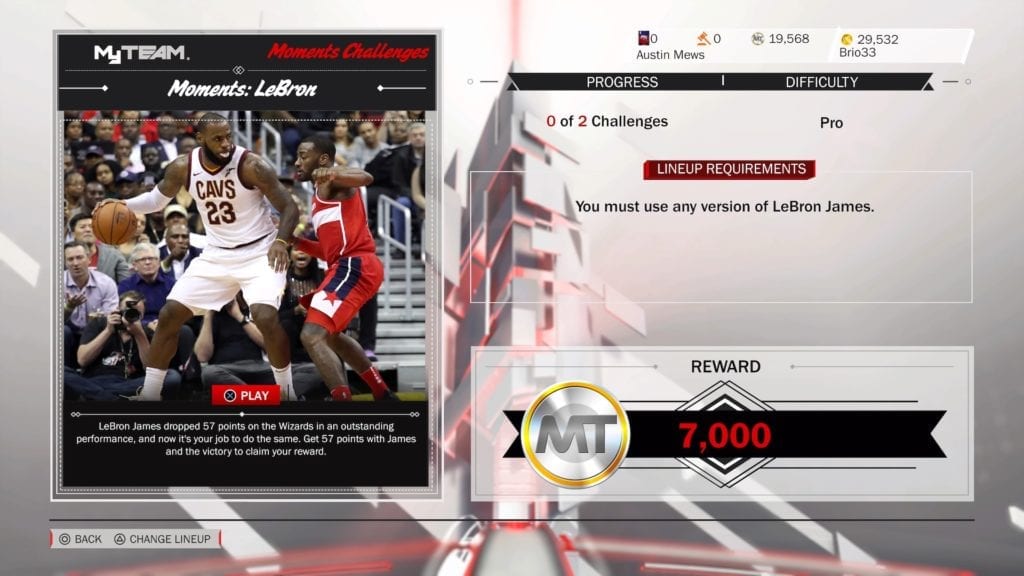 Then the new Moments Challenges require you to actually have a specific player. Here it’s LeBron James or Chris Paul, but as you can see above, the reward is substantial.
I don’t have a Lebron card, so I went to the auction house and (shocker!) the price of even his regular sapphire has skyrocketed. Supply and demand, right? So unless I hit the pack lottery, this challenge unfortunately is not worth it for me. I did the Chris Paul challenge though, and getting 12+ assists in the 2nd half was harder than I thought. 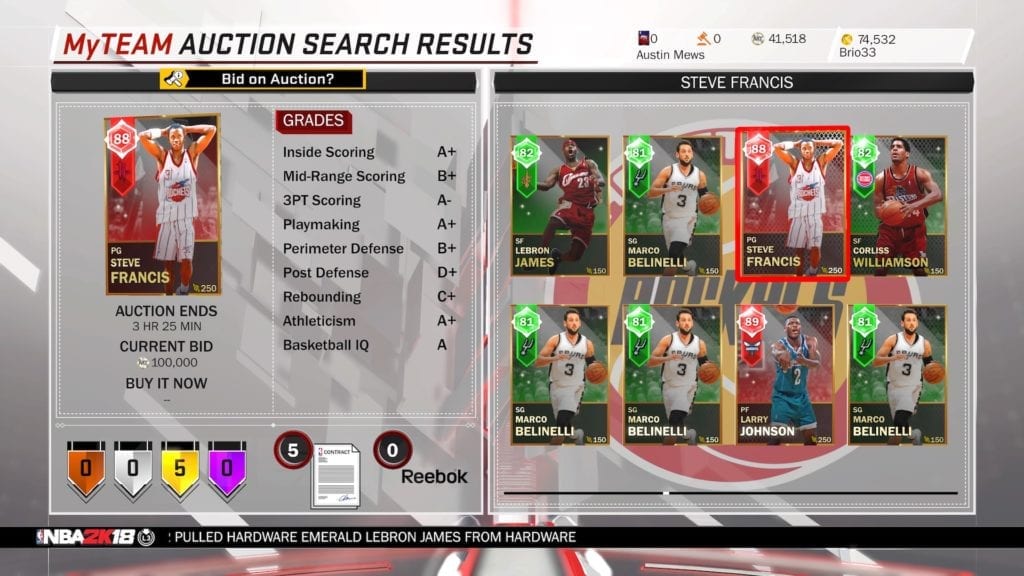 Also new this week, we’ve got a new premium pack called Hardware, which contains players who have won an award like Rookie of the year or Sixth Man. The reason to collect them all is Andrei Kirilenko, who is this year’s first amethyst reward for completing a premium collection.
Personally, I’m just hoping to get Steve Francis, or former Defensive Player of the Year Joakim Noah. I wanted to take a screenshot to show you Joakim’s stats, but (as of the time I’m writing this) his card is MIA. 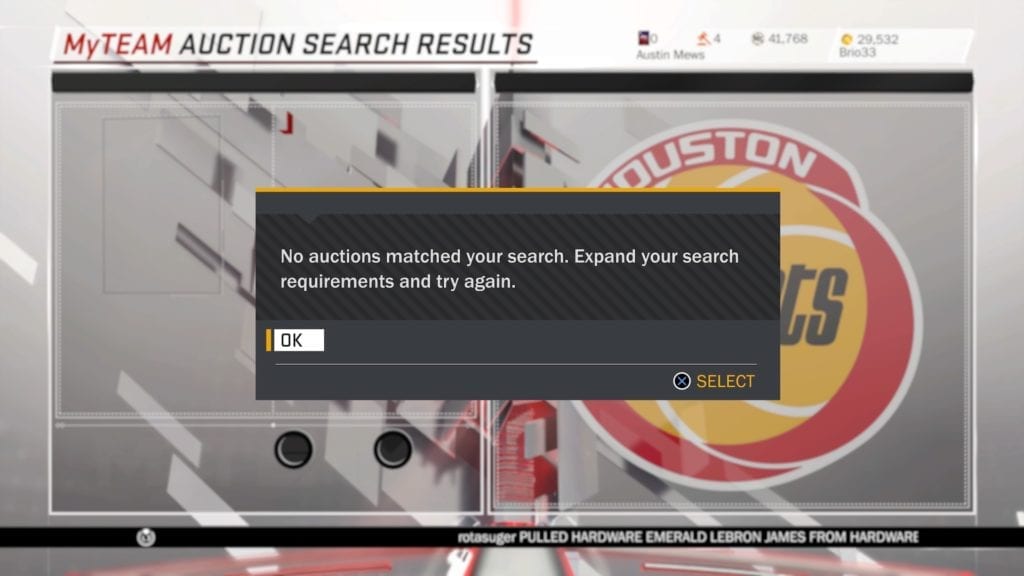 This brings up an interesting phenomenon I’ve noticed recently. It seems like a lot of new (specifically historic) cards just aren’t consistently available in the auction house.
Are people holding onto them because they like the cards, or need them for completion rewards? Or, (conspiracy theory alert) is 2K keeping these players in short supply so that the few that are available have insanely high prices? Back to supply and demand, if I need a bunch of MT to get Enes Kanter from the Jazz, I’m more likely to spend real money on packs looking for him, or at least to get a player I can sell to save up MT.
The other (related) thing I’ve also noticed is that when I do open packs, I seem to get the same cards over and over. No offense to Ian Clark or Sean Kilpatrick or Ian Mahimi, but your cards don’t bring me any MT. I’ve mentioned being unlucky before with packs, but I feel like it’s getting kind of ridiculous. This week, for example, I’ve opened a few Throwback Packs and I got the gold Bill Cartwright three times!
Obviously I’m not the only one. 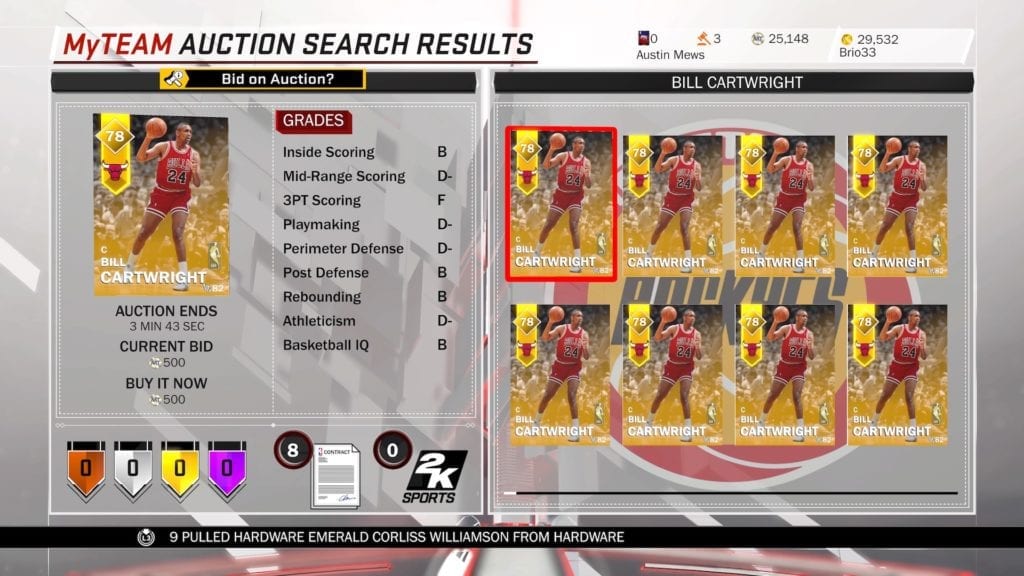 Speaking of Throwback cards, the new batches (2K blog details here and here) have a interesting mix of players. In addition to Enes Kanter, I’m personally hoping to grab Jeff Hornacek and Kyle Lowry so I’ll be that much closer to completing the historic Jazz and Rockets collections. But I bet a lot of people will be gunning for Glen Rice to go with their ruby Ray Allen cards, which would be a nearly unstoppable combo.
Finally, I’ve leave you with a couple of new Moments Cards I’m looking for: 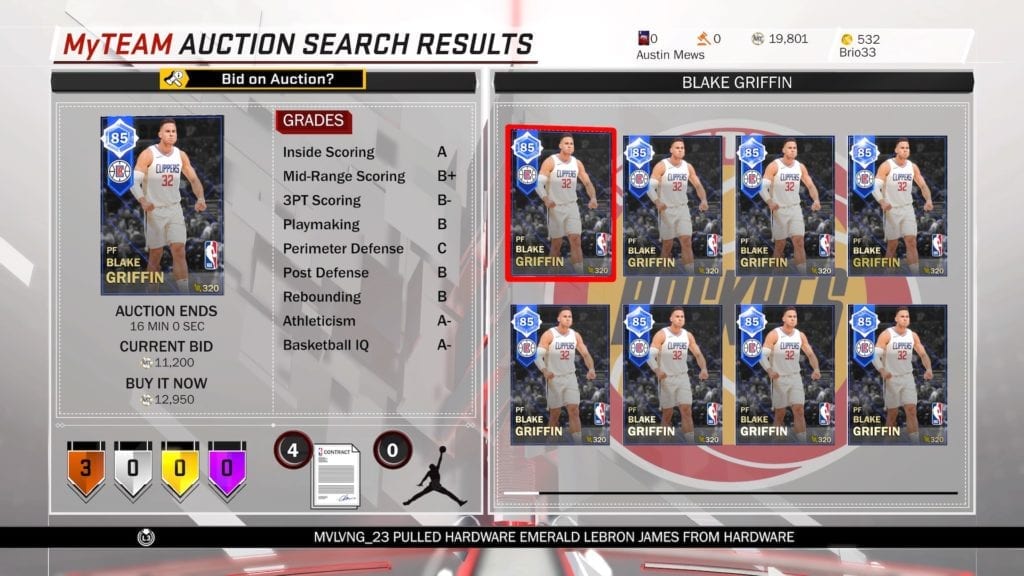 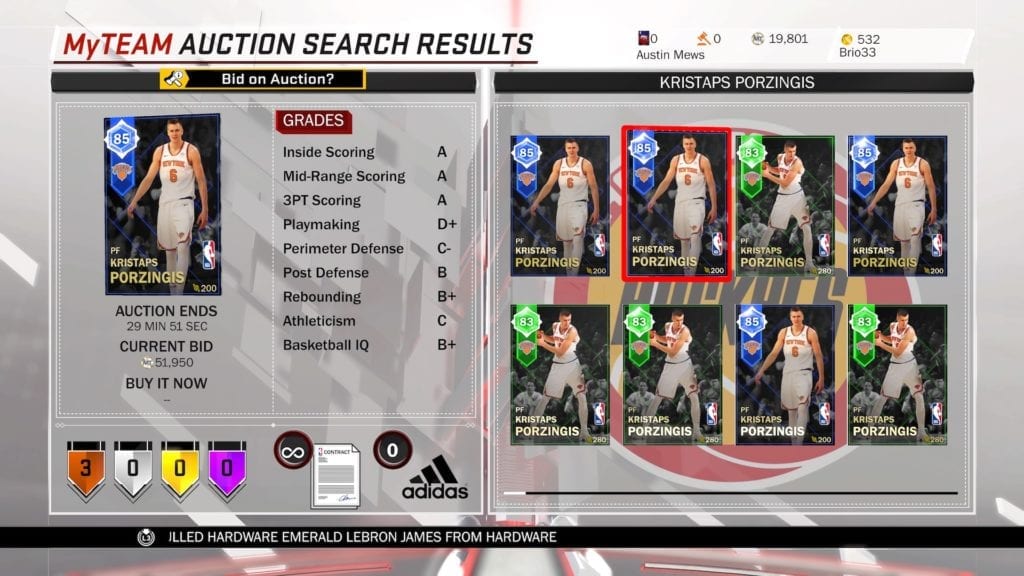 I’ve enjoyed using the emerald Blake Griffin, but his Moments sapphire has a higher 3-point rating, which is always of interest to me as I continue to search for the perfect stretch 4. Then Porzingis (or Porzingod as I’ve seen him referred to recently) has two Moments options now, so hopefully in time he (and his high 80s 3-point rating) will become affordable.
In the meantime, I’ll keep playing the pack lottery like the addict that I am — and probably get another dozen Bill Cartwrights.