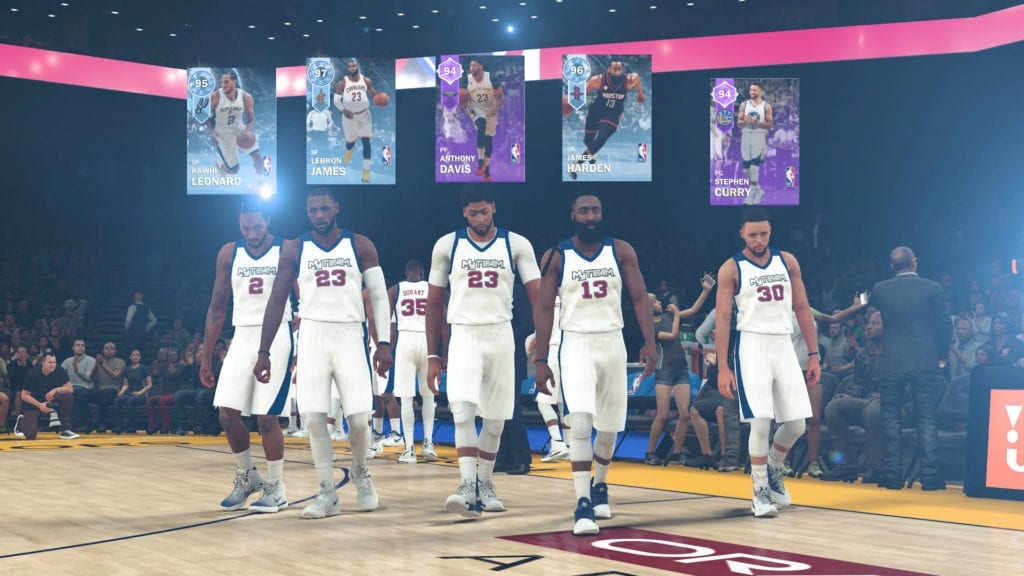 I called this Week 2, Part 2 because according to the newly posted MyTeam Challenges, Week 2 actually started last Thursday. By my count, this is actually the third week the game has been out (or since I’ve ventured outside…kidding…or am I?), but I digress. I’ll adjust my numbering system going forward, and more importantly, there are finally new challenges to play! Your mission, should you choose to accept it, is to defeat the new-look NBA teams that cleaned up in free agency and/or the draft. So get to work earning those challenge tokens while there’s still time. Speaking of challenges, I came across a massive one over the weekend.

And it broke me.

“Earning cards the hard way creates an emotional connection to them that makes playing MyTeam way more fun to me. And the best part is, it can be done without spending a dime.”

That was how I ended my last article. Famous last words, right? Well, in a moment of frustration recently, I ponied up for some VC and bought a Throwback Box. I’d just gotten slapped around again by the final game of Domination and decided it was time for an upgrade (which I’m sure is by design). For those who don’t know, after you beat each NBA team in Domination, you play a version of the East All-Stars, then the West All-Stars and then a Supreme All-NBA All-Star Death Squad. (That’s not what they’re technically called, but it should be.)

Anyway, I Seven Seconds or Less-ed my way past the East team. Then I Grit and Grind-ed the West. But that aforementioned Death Squad was Gandalf-ing me: …or shoot. Or rebound. Or dribble. They chewed me up and spat me out.

I got crazy lucky — the first pack I opened had a shiny new ruby Al Horford! Then the second one had a sapphire Christian Laettner! These are part of the new batch of cards (historic rubies and sapphires only) that they (the 2K MyTeam gremlins) recently injected into Throwback Packs. Here are a few examples: The rest of my pack openings weren’t as exciting, but since the auction house is hopping right now, I was able to flip nearly everything I got. I had my sights on more team reward cards, but I needed that MT to afford the missing players. And luckily, Mr. Laettner and his friends brought back a mighty haul.

Since I had just gotten Al Horford (which I ended up keeping), I decided to focus on my Perimeter Centric lineup. The power forward spot was specifically lacking, so I targeted Shareef Abdur-Rahim from the Grizzlies because he’s rated 99 in that system. Then I already had Kyrie, and the Kerry Kittles and Bob Dandridge rewards from last week, so my starting lineup was set.

The bench needed help though. So with my leftover MT, I went to work. I’ve always been a Chandler Parsons fan from his Rockets days, so this (admittedly overrated) card fits well within my system. And it appears to be rare (or rising in value), so I’ll probably flip it for more MT if that trend continues.

Paul Millsap (supercharged with his dynamic duo, Kyle Korver) is a power forward who can guard bigs or perimeter players, and he’s the man in the post. Between him, Shareef and Al, I feel like my big man rotation is locked in. Well, for now…

Paul and Kyle are both part of a long-term plan — the Historic Jazz team collection. Oh, hi Mark. What system proficiencies are you having the most success with? Have you found any system-specific players you would recommend?

I’ve actually spent a lot of time recently trying to find players suited to the systems I use the most: Perimeter Centric, Seven Seconds and Grit and Grind. It’s quite a time-consuming (and expensive) experiment to find the right guys, but MyTeam has been so much more fun because of this aspect of the game. I love perfecting lineups with different strengths, and depending on which team or mode I’m about to play, I use a specialized squad to combat it. This keeps everything fresh and engaging, and definitely has made me a better player.

But I need to keep upgrading my team as I now work through Historic Domination. Yep, with the help of my new cards, I was able to finally defeat the Supreme All-NBA All-Star Death Squad! They still beat me a couple more times as I was getting acquainted with my new guys (one game was lost in the final seconds because of a missed dunk that turned into a Steph Curry 3-pointer, at the buzzer, in overtime), but eventually I took them down.

Here’s the reward I chose as my first 2K18 amethyst card: Ron has the weirdest free-throw timing I’ve seen in the game so far, but defensively, he Gandalfs the opposing team’s best player into submission. I might even have to venture back online to see how he stacks up, but for now, Historic Domination doesn’t stand a chance.