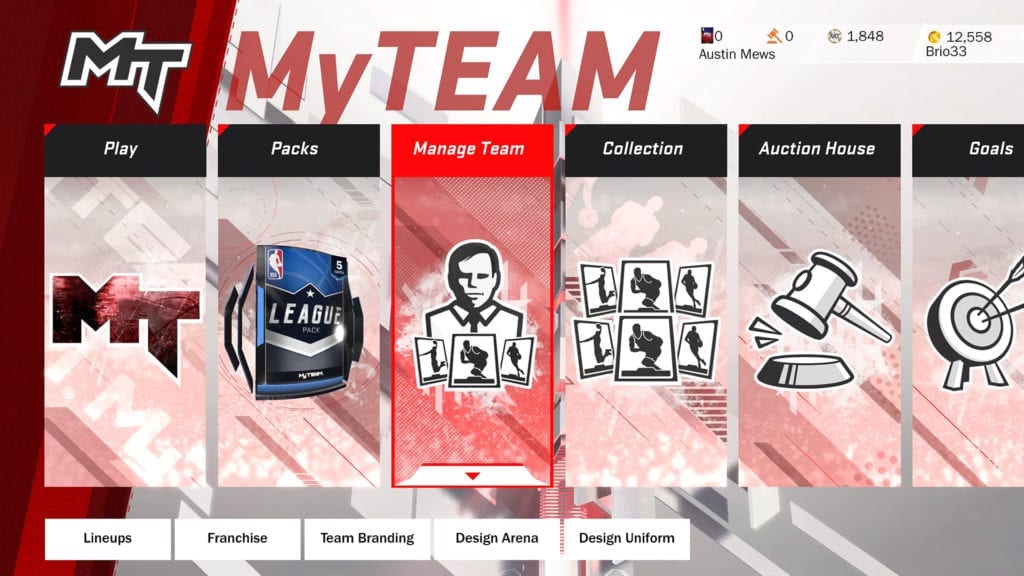 Don’t tell 2K, but MyTeam is big enough that it could easily be its own game. With that in mind, it’s back in NBA 2K18 and (mostly) better than ever. I won’t waste time detailing the warm-up challenges and starter packs. The game walks you through everything, so even first-timers should be able to dive in without a problem. The only thing I’ll mention: do put some thought into your coach and play style, aka System Proficiency. It seems to make a difference on the court and also adds welcome layers of depth and strategy to your lineups this year. I went with Perimeter Centric initially but have been playing around with others as well.

Need contracts like me? Of course you do, you can’t play without them. This year, especially, you’ll need contracts up front as you explore the various game modes. Well, friends, the Schedule Challenge is here to help: Aren’t those ticket graphics gorgeous? The reward for the first game in each team’s schedule is all contracts. That’s 30 games X 5 packs X 3 contracts!

Initial games are basically a two-minute drill, so they don’t take a ton of time to complete. And in case you were wondering, game two gets you injury cards, game three is strategy cards, game four is shoes, and game five is a bronze player pack. Games 6-30 — I’ll let you know when I get there.

Need more/better players? Domination is my jam and should be yours, too. In addition to getting a card every time you win (with three stars, of course), it’s a good way to earn that sweet MT. The mode rewards scoring, team play and defense: Don’t forget to shoot at least five three-pointers and 10 free throws because these percentages translate to easy money. Then, once you start earning decent cards, be sure to unlock the auction house.

Yes, I did say unlock. You have a set of “goals” to achieve first, which is kind of annoying. But it doesn’t take too long, and you continue to learn about new features in the process. I’m in the auction house constantly. I’ve never really been lucky with buying packs, so I usually bid on specific cards up front that I know will help me win. More on that later.

I also like to target players who fill out entire teams and earn the associated rewards: This is a fun way to earn versions of players you can’t get anywhere else, and it gives you a leg up on the competition. Also, I personally love the collecting aspect of the game. It brings me back to when I was 15, buying packs at Walmart and trading with friends.

One final note about the auction house: There’s always a race to be the first one through Domination and then Historic Domination, because this early in the season, it’s the only way to get historic cards. This isn’t just for the joy of collecting though. There are some basic supply/demand principles at work here. The first people to earn those cards will dictate their prices in the auction house. Who says video games can’t be educational? If you play well with others, MyTeam has a healthy online component as well.

In addition to the old multiplayer challenges, there are some new options this year called Super Max and Pack and Playoffs. For more details, here’s a dev blog from 2K.

Unfortunately, playing online kind of sucks to me. I feel like I have to adopt an entirely different play style to have success — one that’s more about beating a video game than playing actual NBA basketball. I’m also having some spotty input lag, and I don’t think it’s my fault; I have freaking Google Fiber over here. But it’s all the more frustrating because the modes do sound really fun. The community has been asking for a draft mode forever, and now that it’s here and I just want to enjoy it.

If you do sail the choppy online waters, there are only a couple days left before Round 1 of Super Max begins. So jump in now to get your seeding — just try not to yell at the TV as much as I have. Finally, here are some cards I’ve been impressed with so far:

Jabari Parker was my first auction buy. I needed a quality stretch 4, and in addition to being able to shoot the ball, he’s athletic and can post up. Then, if you need a point guard (to start, or back up Kyrie), consider Dennis Schroder. He can run an offense, score, and most importantly, is a quality defender. I’ve ripped many an opposing point guard with him. Dennis and Jabari also are both versatile enough to fit into a few different systems.

But the biggest surprise so far has been Milwaukee Bucks center Thon Maker. I got him in my starter pack, and initially he rode the bench. Then, when I was running low on contracts, Thon came in and got all the rebounds, blocked all the shots and was deadly beyond the arc! A 7-foot-1 beast who can shoot that’s only rated 72 overall (aka cheap in the auction house)? Okay, I’m going to go take a quick break from MyTeam (to let some auctions run their course) So for now, I’ll leave you with Clint Capela getting funky. Some might call it a glitch, but I think he just invented a new dance move called the Swiss Roll (Rockets fans know what I’m talking about).