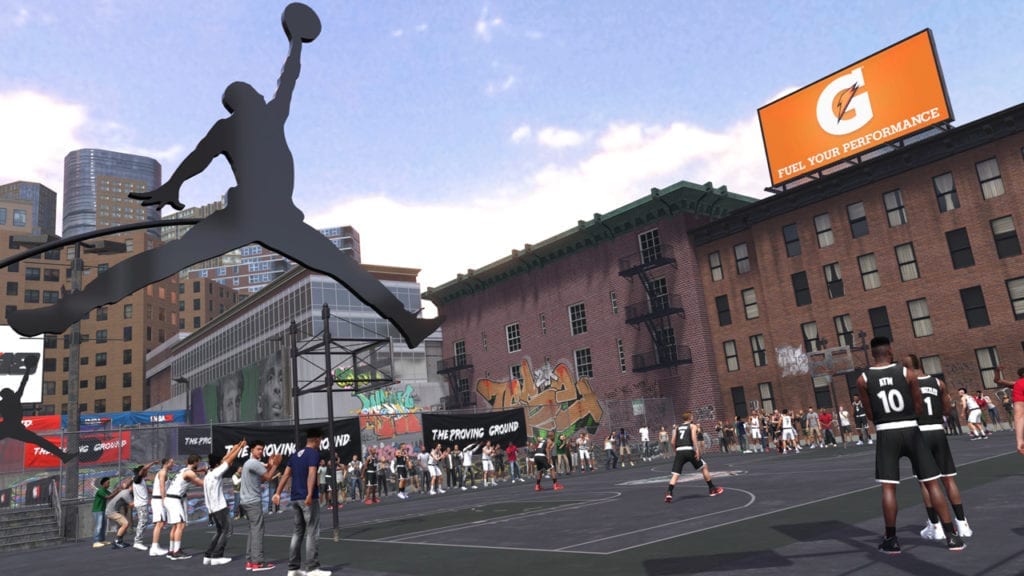 Blurring the lines. That’s the goal all games look to achieve, perhaps even more so in sports gaming. Gamers want to feel they can do that, prove they understand, and feel that’s what it’s like to be there.

The NBA 2K team hosted a day-long event in New York City to introduce their biggest enhancement for NBA 2K18, The Neighborhood; a mode that seemingly will blur the lines more than ever before in the NBA 2K series, at least beyond the more traditional NBA courts.

The Neighborhood brings “the most loved elements of NBA 2K — MyPARK, Pro-Am and the popular MyCAREER experience — together into a shared world for players to truly experience the life of an NBA athlete, both on the court and off,” according to the official press release. 2K’s guests for this event didn’t know it at the time, but by touring parts of Midtown Manhattan, they were actually being inserted into a real-world replication of The Neighborhood. Places visited, stories told and swag collected were all elements that blurred the lines between gaming and reality.

The official tour guide for this event was famed New York City DJ Bobbito Garcia who told us stories from the front of the bus about the history of basketball in New York, the city’s impact on the game, and even his cameos in basketball video games. Garcia was terrific, and was the perfect choice to lead us through this tour of his city.

The first stop was Made Man Barbershop. Detroit Piston Tobias Harris was waiting for us inside and chatted and took pictures with many of the guests. While getting a trim, we were able to play NBA 2K on the Nintendo Switch as the game will makes its first appearance on the system.

This is the experience NBA 2K18 gamers will get when entering into Doc’s Barbershop in The Neighborhood in which you can select a new cut, interact with NBA players, and more.

We made similar stops at Foot Locker and Harman, with each locale providing a glimpse into the experience The Neighborhood will bring to gamers in terms of swag that can be obtained, such as the new Kyrie Irving shoe and JBL E55BT headphones. As in the game, we crossed paths with various NBA stars like Damian Lillard who did an intimate trivia session with our group.

Although we did not make the rounds for every type of storefront you’ll see in The Neighborhood, gamers will still be able to experience an in-game tattoo parlor, an official NBA Store, and of course competing on The Playgrounds scattered throughout The Neighborhood, which are updated replacements for Parks.

When the tour ended, we were back at 2K’s base where they unveiled The Neighborhood for the first time during their live stream. We then had a few hours to play the fully featured game and talk to 2K staff about the game.

I spoke to Jeff Thomas, Vice President of Sports Development and Visual Concepts for 2K, about The Neighborhood, a concept Thomas said was something he had wanted to do for a few years. He confirmed my impression of The Neighborhood seemingly being a zoomed out version of the Park concept. Thomas continued to discuss some fun features that may take NBA 2K18 gamers a bit of time to even notice, such as being able to not only visit a friend’s MyCourt again, but also to sit on their virtual couch and actually play the game together. He mentioned that your MyCourt will now have an elevator. He mentioned that not only can you utilize locations such as the Gatorade Gym, but also walk by the window and even see other actual MyPlayers working out in real-time.

In exploring NBA 2K18‘s The Neighborhood myself, I noticed a few things right away that I liked, such as your overall rating being prominently displayed in place of your rep below your MyPlayer (I was told that the rep system has been completely replaced with the new Road to 99). I noticed the new Playground courts, I was able to create a T-shirt (which fans can vote on to be sold in the virtual stores), and I walked into the indoor courts called The Venue. The Venue is where the larger tournaments will be held, and give these events a more grandiose feel. While the Playgrounds are spread throughout the Neighborhood, The Venue courts are spatially laid out similarly to how Park courts were.

Community Manager Chris Manning discussed with me some of the sponsored tournaments that 2K18 would be putting on in The Venue, starting with the Ruffle’s 4-Point Line challenge — a tournament that will add a 4-point line in an otherwise familiar game; a subtle yet entertaining twist that will help this tournament and others like it feel fresh and unique. From the very moment I started to explore The Neighborhood, however, I found myself wishing I could run faster (just like in real life). There is a run button, but it didn’t seem to pick up the pace much. Perhaps this is something that will be tweaked, or maybe we can eventually use transportation such as bikes and cars to get around a bit quicker once we improve our MyPlayer. Perhaps in a future version of NBA 2K, The Neighborhood could benefit from introducing sponsored cars, parking spots or a garage, again similar to Grand Theft Auto.

One thought I had was that I’d like to be able to unlock certain phrases to say to other games as I walk by, similar to the different run/walk styles we’ve had in the past. A lower-level phrase might be, “Hey, man!” or “Let’s ball!” Higher-rated players might be heard muttering, “We talkin’ ’bout practice!” or “What’s the frequency, Kenneth?”

But is this getting carried away? Is the Neighborhood moving too far away from a basketball game, or is it bringing us closer to the game by living it more vividly? The Neighborhood is not the only upgrade to NBA 2K18, not by a long shot — just read the blogs from Beluba, OG, and Czar, and the many already previously revealed features such as dual-archetype MyPlayers, Road to 99, and more. However, The Neighborhood was its most prominent and publicized addition. So are we blurring the lines in the right direction? These are questions I think the community will begin to sift through in due time and find answers to. The Neighborhood will absolutely blend a lot of the elements Bobbito Garcia talked about with the storied history of big-city basketball, and The Neighborhood is an enhancement that seems primed for a natural evolution. I believe gamers will enjoy The Neighborhood, but I also am curious how the community will feel it adds to the game’s overall experience. Will folks spend more time on the courts or in the stores? Working on their hair more than their crossovers? Is The Neighborhood something that actually takes gamers further away from NBA basketball? Is it a step towards an even deeper eSports integration in the future?

I was told at the start of the 2K event that what we were about to see today would change sports gaming, and I believe in that sentiment. Now, like the rest of you, I wait to see where this ride will take me.