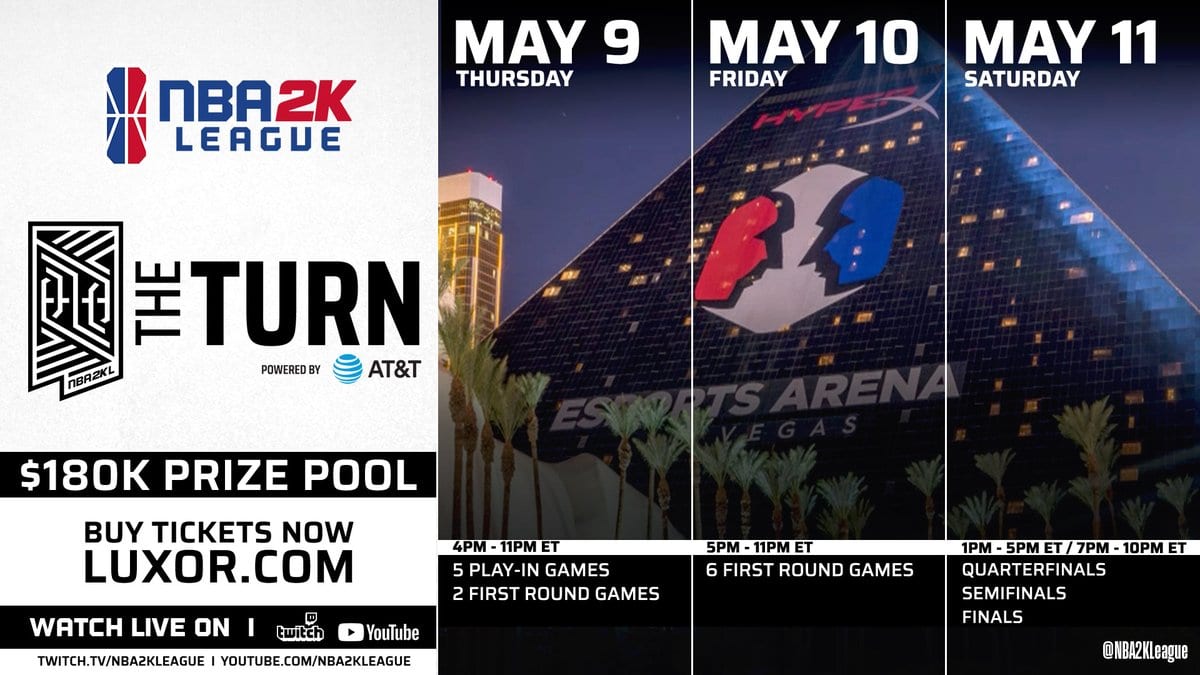 THE TURN powered by AT&T, the NBA 2K League’s second tournament of the season, is taking place now through Saturday, May 11 at HyperX Esports Arena Las Vegas, at Luxor Hotel and Casino. All games will be live-streamed on Twitch and YouTube.

KING OF THE STRIP: Hawks Talon GC’s Connor “Dat Boy Shotz” Rodrigues (left) was No. 1 overall pick in the 2018 NBA 2K League Expansion Draft. The Lemoore, CA-native currently leads the league with four steals per game. Atlanta is currently 3-2 in the 2019 regular season and will make their Las Vegas debut on Thursday, May 9 when they host 76ers GC at 10 p.m. ET.

EYEING ANOTHER JACKPOT: With After winning THE TIPOFF powered by AT&T in April, Ethan “Radiant” White (left) and 76ers GC has gone 3-2 in the 2019 regular season. Philadelphia will begin their quest for another tournament victory on Thursday, May 9 when they visit Hawks Talon GC at 10 p.m. ET. After earning THE TURN champion banner in 2018, 2018 NBA 2K League MVP Dayne “OneWildWalnut” Downey and Blazer5 Gaming are looking to repeat that success. Portland enters the tournament on a six-game winning streak.

WHEN THE CHIPS ARE DOWN: Celtics Crossover Gaming enters THE TURN 1-4 on the season, but the team cannot be counted out when it comes to NBA 2K League tournament play. When the chips are down and the stakes are high, Boston is a force to be reckoned with in the league. The team has advanced to the final round of the past three tournaments and is hoping to capture a champion banner. Boston will begin that journey on Thursday, May 9 when they visit NetsGC at 7 p.m. ET.

ELECTRIC START: To celebrate the start of THE TURN, electronic duo and Norway-natives Lemaitre will perform for the NBA 2K League’s live audience and broadcast on Thursday, May 9 at approximately 12:40 p.m. PT, prior to Wizards District Gaming taking on Magic Gaming. The performance will air live on Twitch and YouTube from HyperX Esports Arena Las Vegas at Luxor Hotel and Casino. Fans can attend THE TURN powered by AT&T by purchasing tickets here.