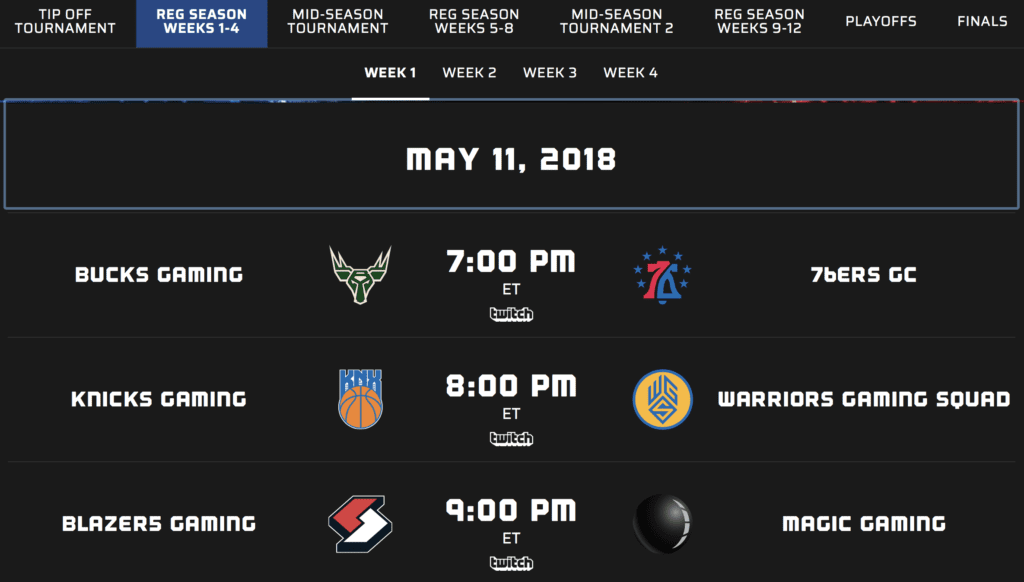 The NBA 2K League today announced its schedule of regular-season games for the inaugural season, which will stream live on Twitch.  The 15-week regular season features both weekly games and tournaments, followed by the NBA 2K League Playoffs and Finals in August.  All competition takes place from the NBA 2K League Studio Powered by Intel in New York City.

Weekly matchups begin on Friday, May 11 with three games, followed by a full slate of games on Saturday, May 12.  For the full schedule of regular-season games, visit NBA2KLeague.com.

Teams play weekly games during three time windows to provide convenient viewing for both domestic and international audiences: Fridays from 7-10 p.m. ET, Saturdays from 11 a.m. – 2 p.m. ET and Saturdays from 4-8 p.m. ET.  All games can be viewed on Twitch.

During the season, the 12 weeks of matchups will foster new rivalries and determine playoff seeding.  Three tournaments staggered throughout the season provide peaks of drama as teams compete for prize pools and one guaranteed spot in the playoffs for the winner of the final tournament.

Seeding and matchups for the next tournament (June 8-9) and the third tournament (July 13-14) will be determined by a team’s record during the four weeks of regular-season games preceding each tournament.

The league’s first tournament, THE TIPOFF, took place from May 1-5 and saw 76ers GC win the title and the first of three steel banners that make up THE BANNER CHAIN.  THE TIPOFF champions play the first weekly matchup of the season when they face Bucks Gaming on Friday, May 11 at 7 p.m. ET.