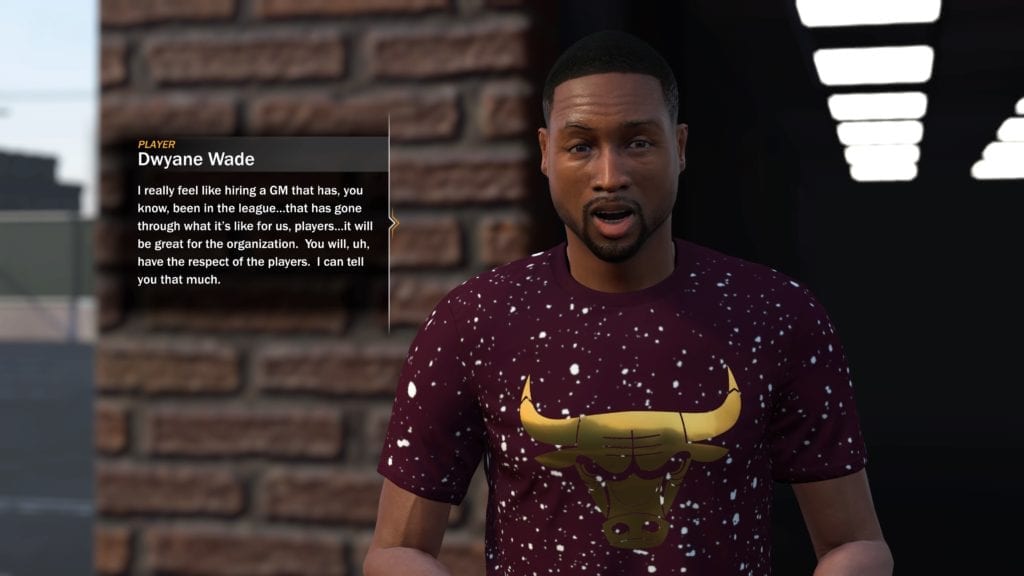 Writer’s note: There are some spoilers in this piece. If you plan on playing through MyGM and haven’t yet, skip this article…for now. Otherwise, read on and enjoy.

After playing and establishing that NBA 2K18 is an absolute slam dunk, I decided to jump into the game mode that was changed this year but not as prominently talked about as The Neighborhood. Sim fans will all quickly say that the depth, accuracy and sheer control that MyLeague offers is second to none. Players have full control over everything when they set up a new franchise. MyGM, on the other hand, was for the players that want that same experience but with a story to go along with the daily grind of NBA basketball. Once again the 2K team has gone and put in changes to make MyGM refreshing and fun for at least some people. Let’s look at MyGM and how it works. The Intro: Starting Off The New MyGM

This year, the premise of MyGM is to bring the player behind the closed doors of team offices and into the room with owner and GM. If it ain’t broke, don’t fix it; MyGM has had a story to go along with the gameplay, but it was never as deep as they tried to go this year. You’re going to mostly have the same interactions and stories that we saw last year.

The difference this year is that you’re truly going to deal with issues that haven’t been seen in the mode before, and you’re going to have to make decisions that a GM would make that will either make you a hero or a villain (though, some decisions don’t have any consequences or actually empower you to make a real choice). The storyline for MyGM runs for the first year and settles into normalcy after your first season.

You’ll still have press conferences and the other cutscenes you’re accustomed to after year one, but the main story you get to witness happens only in your first year.

You start off the mode seeing your MyPlayer distressed in the team locker room during the 2011 playoffs, in some serious pain. You’ve already dropped 36 points in another hall of fame appearance until the unthinkable happens, you’ve blown out your knee.

Jump forward six years and you’re apologizing to the owner of the team you’ve chosen while setting up MyGM, which is in my case Chicago Bulls owner Eugene Petit, for being late to meet up with him. I run into Dwayne Wade and Fred Hoiberg in the parking lot of the Bulls facility; D Wade tells me that he’s excited that a former player that understands how an NBA player feels is now the GM for the Bulls (bye Wade, my first act is buying you out). I meet with Mr. Petit who sets me up for my introductory press conference and tells me not to lie to the press, but instead to be honest and candid.

At the press conference, I’m asked if the team is going to be a rebuild, needs a few pieces or is a contender. I decide to choose the “Total Rebuild” response. I also get asked how I felt about my coaching staff, and if I’d be making changes in that area. Knowing that System Proficiency is now another factor to consider when building a team, and also having a penchant to rebuild my staff as my first order of business as GM, I decided to respond that I’d be moving on From Coach Hoiberg and going in a new direction. These are the kind of narratives that this year’s MyGM mode brings to its players. You’ll have to make decisions that will endear you to some and alienate you with others. This won’t sit well with some fans, but your first year through MyGM will be cutscene-heavy. Most of the conversations you’ll have with the various members of your staff throughout your first year will cover team issues, but they’ll also be very awkward. Like, real awkward. Talking about avocado bread and various other off-subject things will get old for some, and is weird to say the least. That being said, everything is written in text boxes rather than voiced, so the awkward interactions at least only have to be read.

Writer’s note: I simulated all my games, jumping in here and there when games were close. Roster moves were made, but I won’t detail them all.

Starting fresh in my new office, I start working on rebuilding the Chicago Bulls dynasty back to its glory days. Because I had said in my introductory press conference that I’d be going in a different direction with my coaching staff, Fred Hoiberg came to see me and literally lost his marbles.

He felt disrespected that I said I’d be moving on from him eventually; he vented, aggressively, and re-signed from his head coach position. Basically, he pulled an anti-Hoiberg. Assistant coach Jim Boylen then approached me about possibly taking over as head coach. I went ahead and gave him the job. At this point I still hadn’t even gotten to the main screen you’ll mostly see in MyGM, which is your team calendar (this is part of why I say some fans might find the cutscenes a bit much). Owner Eugene Petit then brought me into his office to slightly reprimand me for making such a “surprise” move in the coaching ranks. After telling me that I needed to “make a splash” in replacing Fred Hoiberg, I got to jump into really taking over the team and getting the hard work in to make the Bulls a powerhouse again. My first piece of work was looking at, and rebuilding my whole staff from top to bottom. It could possibly be to a fault, but I always like to have staff and players that have a high potential rating; room for improvement means longevity and sustainability for the team.

New head coach Boylen had sub-par grades for the position; each staff position has respective grades for that position that give you a good idea as to if they’ll help your team be better — or flounder in obscurity. With an Offense grade of C, a Defense grade of C+ and a Potential grade of C-, head coach Boylan simply did not fit into what my rebuild plans were. He had to go. For each current or potential staff member you do or could have, there is the possibility of also having a “Staff Badge.” These badges vary dependent on staffing position and can either be a plus or detriment that affects the team. MyGM has a glossary that will show you what each badge means so you’ll have an idea of who might or might not work for you based on what you’re looking to achieve.

At this point, I needed to not only hire an assistant coach, but I’d just let Jim Boylen go and needed a head coach as well. I also decided to replace my assistant GM and trainer as well. After replacing the staff needed and upgrading in those areas, it was time to start simulating. After about a week into the sim, a social media message got enlarged automatically saying that the Chicago Bulls were up for sale. This caught me by complete surprise. This is when the storyline of the mode got interesting — and more absurd by the day. I don’t want to fully divulge the MyGM storyline here as to allow you guys to experience the fun yourselves, so I’ll just break down some of the big points of year one (people should more or less have the same linear story beats):

As you can see, there’s a whole lot of action in your first year as GM and quite a lot of story that goes with it. The Minnesota Timberwolves beat out the Boston Celtics in the NBA Finals, 4-1. My Chicago Bulls were knocked out in the second round by Boston. I won the Executive of the Year award for quickly rebuilding Chicago into somewhat of a powerhouse mainly off the acquisition of Devin Booker; the team record in my first season was 48-34, landing the Bulls in fourth overall in the Eastern Conference. I think that MyGM: The Next Chapter was a fresh way to give MyGM mode some life. The cutscenes do tend to get kind of cumbersome and painful after awhile (except when talking to your team scout — those are some funny conversations), but the things that happen do give off some excitement in trying to keep, tweak or rebuild your favorite NBA team.